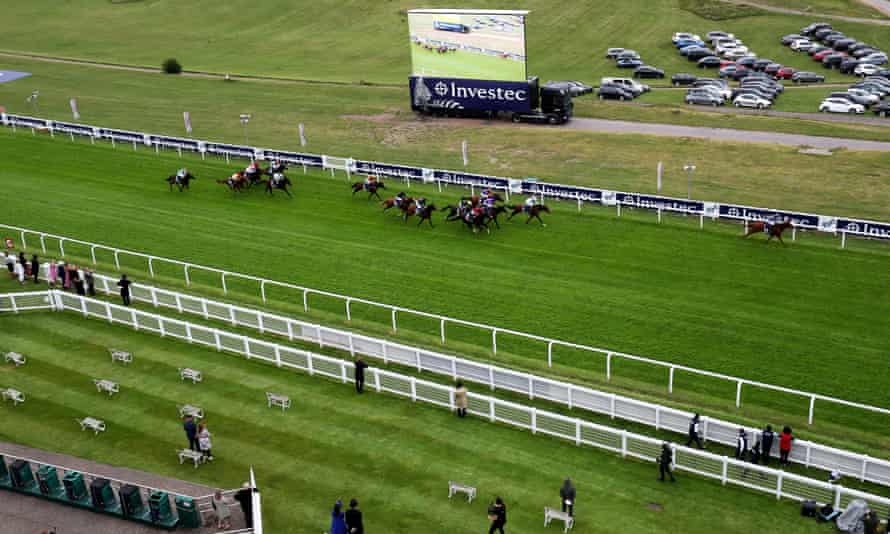 The taps were turned on at Epsom Downs on Monday morning, in preparation for the two-day Derby Festival which opens with the Oaks card on Friday. The decision to apply 5mm of water to the parts of the track that are currently good-to-firm arrived 24 hours after Andrew Cooper, the clerk of the course, described the weather forecast for the next few days as “one of the ones you want to avoid” in Derby week.

Monday also marked Epsom’s debut on the excellent Weathertrax system, which gives real-time updates on the current weather and going at the course, how much water (if any) is being applied, and how much has been lost via “evapotranspiration” – directly from the soil and also from the grass – in the last 24 hours. It highlights Cooper’s problem as he aims to ensure that the going is “no faster than good-to-firm” for the Classics later this week.

The current hot spell is expected to last until late in the week, before turning “unsettled with possible showers and slightly cooler” from Friday. Rain on watered ground just before racing could easily see “soft” creeping into the description, but if the taps stay off and the showers miss Epsom, the track would be like tarmac for the Oaks on Friday afternoon.

Watering – or “overwatering”, as its critics might say – remains a sensitive issue for many professionals and punters alike. Mark Johnston, who has sent out more winners than any British trainer in history, has suggested that clerks often err on the side of caution.

“We’ve definitely got a problem that ground is overwatered and not what we’re looking for,” Johnston told the Racing Post in 2019. “It doesn’t produce the best of racing and it’s not doing the best for the breed in the long term. We’re looking for good-to-firm so why are they watering to get it softer than that?”

It is an issue with particular resonance before a historic race such as the Derby, which dates back to 1780 and has been run for all but a relatively small part of its history on whatever the ground happened to be on the day. That has been the most significant variable over the last 240 years, with the distance, course, age and weight to be carried having been fixed at a very early stage.

Some would argue that extremes of going are all part of the game, and so if nature decrees a drought in the Derby run-up, then firm ground should be acceptable for the Flat’s most famous race. When Cooper tweeted on Monday that watering had started at Epsom, one of the first replies read: “It’s Flat racing, let the horses’ hooves rattle for once – they do in Japan”.

On the other hand, horse racing remains one of Britain’s most popular sports at least in part because it has adapted to evolving attitudes in wider society. Two points are inescapable: horses occasionally die or suffer serious injuries while racing, and there is a clear link between injury rates and the firmness of the ground.

The rate of fatal injuries during races has declined steadily over the last 20 years from around 0.3% of starts to around 0.2%. Inevitably, jump racing accounts for the majority of deaths. That is no reason, though, to allow racehorses to run unnecessary risks on the Flat, whether it is in the Derby or a seller at Catterick.

Cooper knows that he will have his critics whatever he does this week, but second-guessing the British weather is an impossible task and he is clear that he “wouldn’t have any issue” running the Oaks and Derby on good-to-firm. And if Epsom is unlucky with the showers and it ends up good, or slower still, that is still a much better option than firm ground for one of the sport’s showpiece events.