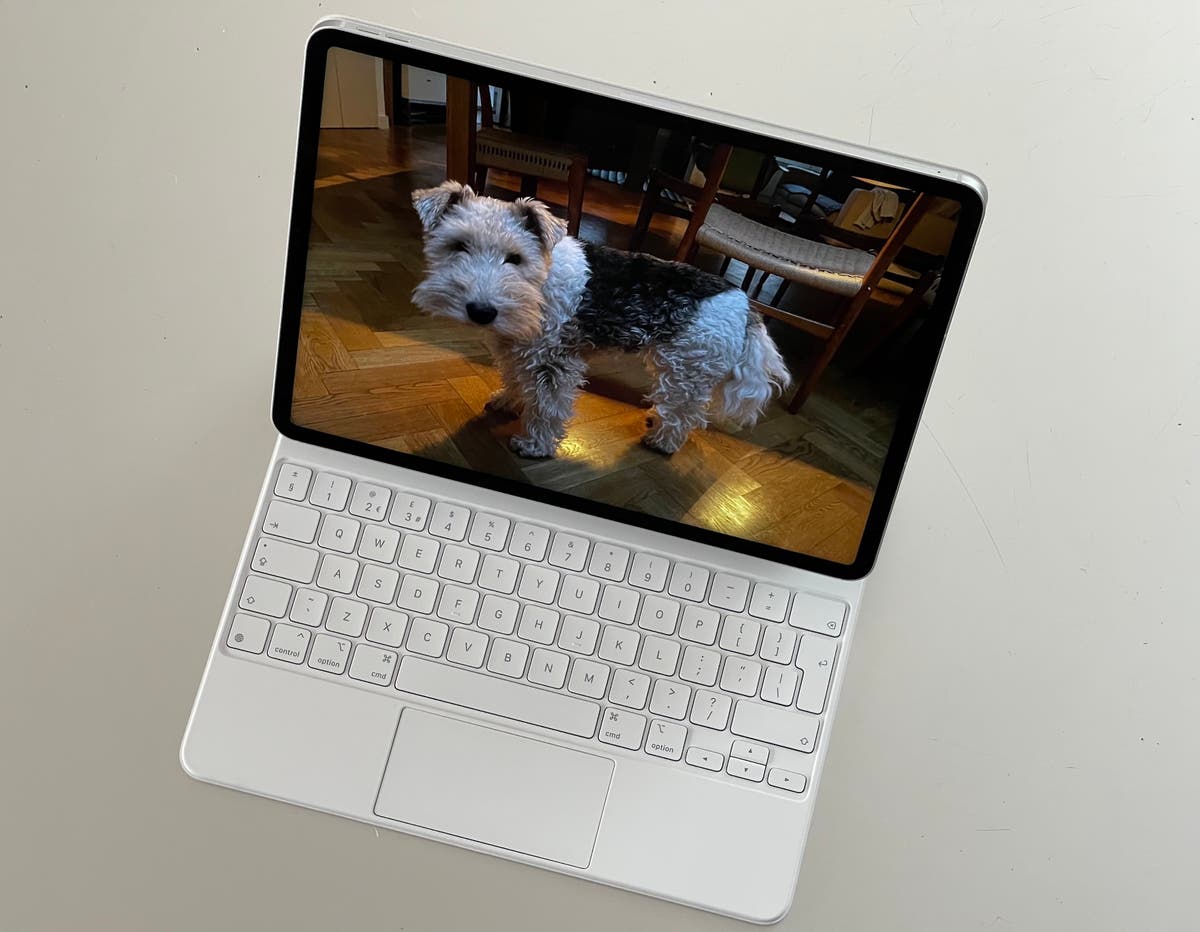 The new AppleiPad Pro has just been revealed and it’s about go on sale. I’ve been testing the model with a 12.9 inch display for more than a week.

The first thing you notice is that the design hasn’t changed at all. Actually, that’s not quite true, but you have to look hard to see the differences. The 12.9-inch display tablet is very slightly thicker than last year – just half a millimetre – and you certainly can’t feel or see any difference at all. The smaller iPad Pro with 11 inch screen has identical dimensions to before, by the way. But when you turn on the bigger tablet you get to see what Apple calls the Liquid Retina XDR display for the first time (the smaller version has the same screen as last year’s model, a more conventional LCD).

Apple’s iPad displays have always been top-notch, but this is in a different class. Even on the loading screen, you can see the difference. Previously the white Apple logo would cover the centre of the screen but if you looked carefully, you could see little glimmers of backlight around the edges.

On the new 12.9 inch model, there is no visible backlight at all, just none, thanks to more than 10,000 backlights which can be turned on and off in 2,500 local dimming zones as needed. The result is a screen image with much greater contrast, deeper black hues and bright, vivid colours.

This new display looks sensational and it’s worth the price increase for this alone. The smaller iPad Pro has actually gone down in price from £769 to £749, the larger model has gone up modestly from £969 to £999. The price goes up for higher-capacity storage. You’ll also pay more if you want cellular connectivity on top of wi-fi – which you may, given this is the first 5G iPad. And since the maximum storage for the first time on an iPad goes to 2TB, significantly more than any other tablet and many laptops, you can pay much more still.

The other big upgrade this time is the processor.One of the surprises at the event when Apple revealed the new iPad Pro was that where all previous iPads had featured A chips (since the first iPad in 2010 launched with the A4), this new tablet has switched from an A series processor to the M1 chip found in its latest MacBook Pro, MacBook Air and the just-released iMac. This is more than marketing semantics. To put a processor capable of running a desktop computer into a tablet is unprecedented.

It indicates that Apple is aiming to make a pro tablet that can work every bit as fast as a high-end computer. An iPad is different from a Mac or a PC, but this one is as powerful. Although every Apple tablet is a fast performer, this is something else.

While for many users the processor in the iPad or iPad Air is more than capable enough for activities such as watching video or playing games, for instance, it’s when you challenge the iPad Pro with much higher-performance apps that the strength of the iPad Pro comes into its own. If you need to edit 4K or 8K video streams, the iPad Pro can do that easily. It can show multiple high-resolution streams on screen without stuttering. The processor is intensely powerful and deeply impressive.

You might think you don’t need the power of the Pro, and you may be right, in which case the iPad Air is a great alternative which is more affordably priced.

But, let’s remember that iPads are very durable, so you’ll likely have your next tablet for a long time. Well, there’s no harm in choosing a device with plenty of headroom: as app developers get their acts together, that power will be exploited for games, fast video and photography apps and more.

This is the first 5G iPad, if you choose the version with cellular connectivity. It means that you can use the iPad at speed in more places. I’ve been testing with an EE sim and the speeds have been awesome. To the extent that I’ve rarely looked around for wi-fi as the 5G signal has been faster and reliable.

Although the new iPads Pro look the same on the outside as last year’s models, the introduction of 5G with its demanding antennae has meant a partial redesign on the inside. This has changed the speakers at the top and bottom edges. There are now fewer, larger perforations than before, though the audio is as effective as ever.

Then there’s Centre Stage, a new feature for both sizes of the new iPad Pro, which makes video calls much more enjoyable. Because the front-facing camera now has an Ultra Wide lens, it means that when you’re using FaceTime, you can move around the room and the camera will focus on you. It’s not the that the iPad Pro is moving, rather that the camera is intelligently zooming, tracking and panning around the available image to keep you at the centre of the action.

This works tremendously. Apple is making the application interface available to other developers so we may expect better video-calling experiences on the iPad Pro from other apps as well. It needs the M1 processor to do this, so this is not available on iPads other than the Pro.

As mentioned, the latest iPad Pro is very slightly thicker, on the 12.9 inch version, than before. Apple warned that this might mean that the current Magic Keyboard folio would not work with a new iPad Pro.

In fact, the company later clarified that although the new iPad Pro is functionally compatible with the last Magic Keyboard, it may not fit perfectly when the Folio is closed, especially if the new iPad Pro has a screen protector on it.

I’d say this is Apple responding with an abundance of caution to ensure a perfect experience. And my experience is that the new iPad Pro fits the old Magic Keyboard, open or closed. In fact, the only reason I’d recommend you spring for a new Magic Keyboard if you have the old one already is if you want it in the natty new white colour. Mind you, I do worry exactly how long the pristine-white case is going to stay blemish free. I wonder if I need a case for the case?

The new iPad Pro, both sizes, also upgrades the USB-C connector to Thunderbolt, and much faster data transfer system with the same size connector.

Again, this mostly applies to professional users who are, for example, transferring large files on or off the tablet, but it’s a welcome upgrade. In most other ways, hands-on experience of the new iPad Pro is basically a faster version of last year. Security elements like Face ID are still here, insuring a fast and intimate way to unlock the tablet just by looking at it.

The front-facing Ultra Wide camera is a 12MP sensor, which is more than the 10MP Ultra Wide on the back of the tablet, and which sits alongside the 12MP wide camera.

I’d still maintain that a big, flat piece of glass is not the ergonomic equal of the DSLR that fits the hand with sublime efficiency, but it’s true that the 11in or 12.9in screen makes for a heck of a way to frame your shots.

Unlike the iPhone, the iPad still comes with a charging plug. The thinking is that while almost all of us have old phone chargers knocking around, there are still a lot of people whose iPad purchase is their first, and a standard iPhone charger is anyway not as effective at charging a tablet quickly.

Battery life, like every iPad since the first one, is excellent. Apple reckons it to be around 10 hours of video-watching, for instance. I’d say that’s about right, though it slightly felt like it was a bit less because of the new, more impressive display. Whatever, it never felt it was running out of juice improperly fast.

The big deal of the new iPad Pro is the miniLED display on the 12.9in model. The Liquid Retina XDR display makes you wish every device had a screen as punchy, colourful and bright as this. It’s worth the money for this alone.

But you also get the M1 processor (and on the 11in model, too, of course). While I’ve yet to come across an iPad that’s a slouch, this year’s Pro is scorching-fast.

The addition of 5G is highly useful and will grow more so as the network widens.

In all, this is a tablet which, because it looks like last year’s model, fools you into thinking it’s the same. Then you turn it on and the Liquid Retina XDR display and blazing-fast M1 processor put the iPad Pro miles ahead of, well, anything else around.

The new iPad Pro is available to order now, from £749.