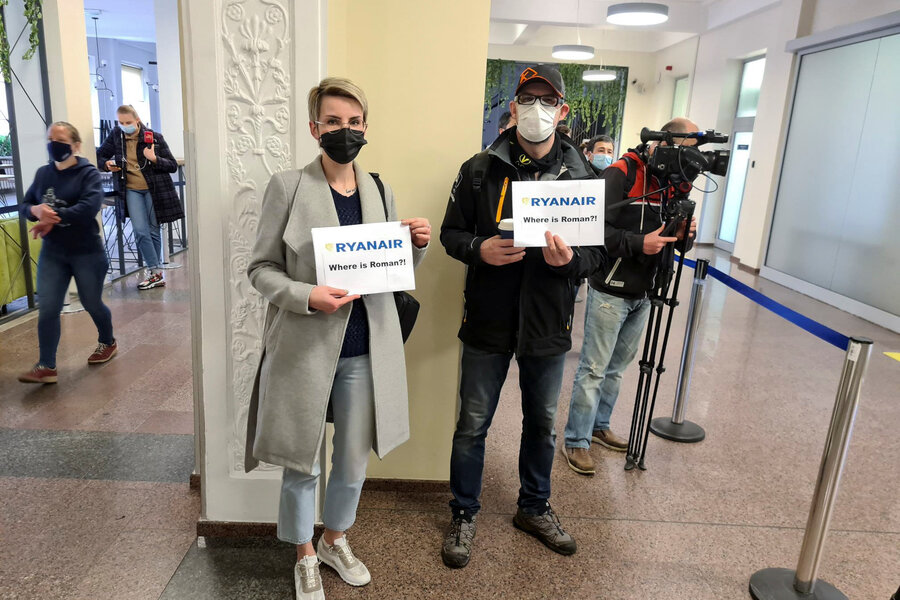 Authorities in Belarus scrambled a fighter jet and flagged what turned out to be a false bomb alert to force a Ryanair plane to land on Sunday and then detained an opposition-minded journalist, drawing criticism from across Europe.

The dramatic incident saw a Soviet-era MiG-29 fighter jet escort a Ryanair-operated passenger plane flying from Athens to Lithuania. The plane was instead suddenly diverted to Minsk, the capital of Belarus, where authorities detained journalist Roman Protasevich who had been on board.

Data from the flightradar24.com website showed the plane was diverted just two minutes before it was due to cross into Lithuanian airspace from Belarus.

EU member state Lithuania, where Protasevich is based, urged the European Union and NATO to respond. Germany called for an immediate explanation and Poland’s prime minister called it a “reprehensible act of state terrorism.”

Ursula von der Leyen, the head of the European Commission, said Belarus’s action was “utterly unacceptable,” while British foreign minister Dominic Raab said there would be serious implications for what he called “outlandish action.”

Belarusian opposition leader Sviatlana Tsikhanouskaya, who like Protasevich operates from Lithuania, called on the International Civil Aviation Organization (ICAO) to kick Belarus out of the organization.

The incident is certain to worsen already dire relations between the West and Belarus, which has been tightly controlled since 1994 by President Alexander Lukashenko.

Opponents accuse him of rigging a presidential election in his own favor last year and of then cracking down violently on the opposition. He denies electoral fraud.

Ryanair said in a statement that the plane’s crew was notified by Belarus of a potential security threat on board and were instructed to divert to the nearest airport, Minsk.

The plane landed safely, passengers were offloaded and security checks were made by local authorities, it said, saying it expected the aircraft to resume its journey later on Sunday.

Protasevich worked for an online opposition news service NEXTA, a Telegram channel that broadcast footage of mass protests against Lukashenko last year at a time when it was hard for foreign media to do so.

Protasevich, who now works for a different Telegram channel called Belamova and who describes himself on Twitter ironically as the first “journalist-terrorist” in history, is based in Lithuania.

He is wanted in Belarus on extremism charges and stands accused of organizing mass riots and of inciting social hatred, allegations he denies.

Belarusian news agency BelTA reported that Lukashenko had personally ordered the warplane to escort the Ryanair plane to Minsk. No explosives were found, it said.

“I call on NATO and EU allies to immediately react to the threat posed to international civil aviation by the Belarus regime. The international community must take immediate steps that this does not repeat,” Nauseda said.

Lithuanian presidential adviser Asta Skaisgiryte said the operation to force the plane carrying around 170 people from 12 countries to land seemed to be pre-planned.

The Belarusian department for organized crime control reported that Protasevich had been detained before deleting the statement from its Telegram channel.

Around 35,000 people have been detained in Belarus since August, human rights groups say. Dozens have received jail terms. Authorities say that more than 1,000 criminal cases have been launched.

Reporting for this Reuters article was done by Andrey Ostroukh and Andrius Sytas in Vilnius; writing by Andrew Osborn, editing by Nick Macfie and Timothy Heritage.