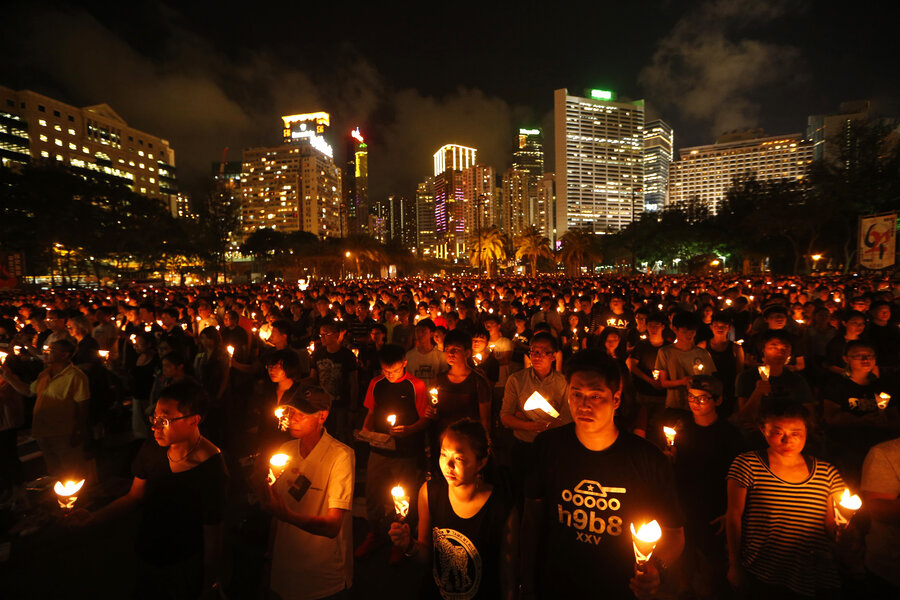 For years, China has quashed any discussion on the mainland of its bloody 1989 crackdown on pro-democracy protesters in Beijing’s Tiananmen Square, nearly erasing what happened from the collective consciousness. Now it may be Hong Kong’s turn, as China’s ruling Communist Party pulls the city more directly into its orbit.

The semi-autonomous territories of Hong Kong and nearby Macao were for years the last places on Chinese soil allowed to publicly mark the events of June 4, 1989, when the People’s Liberation Army opened fire on student-led protesters in a crackdown that left hundreds, if not thousands, dead.

Before last year, tens of thousands gathered annually in Hong Kong’s Victoria Park, lighting candles and singing songs to remember the victims. But authorities, citing the coronavirus pandemic, are banning that vigil for the second straight year. And a museum dedicated to the event suddenly closed Wednesday, just two days before Friday’s anniversary, after authorities investigated it for lacking the necessary licenses to hold a public exhibition.

In mainland China, younger generations have grown up with little knowledge of or debate about the crackdown, but the efforts to suppress commemorations in Hong Kong reflect another turn of the screw in Beijing’s ever-tightening control over Hong Kong following massive anti-government protests in 2019. Those demonstrations evolved into months of sometimes violent clashes between smaller groups of protesters and police. And they have led to a broader crackdown on dissent in the former British colony, which was long an oasis of capitalism and democracy and was promised that it would largely maintain its freedoms for 50 years when it was returned to China in 1997.

Since the protests, China has imposed a sweeping national security law aimed in part at stiffening the penalties for the actions that protesters engaged in, and authorities have sought to arrest nearly all of the city’s outspoken and prominent pro-democracy figures. Most are either behind bars or have fled the city.

Despite the restrictions this year, there are calls for Hongkongers to remember the 1989 crackdown in private, with vigil organizers calling on residents to light a candle at 8 p.m. Friday no matter where they are.

Online calls circulating on social media also urged residents to dress in black on Friday. Local newspaper Ming Pao last week published an article suggesting that residents write the numbers six and four on their light switches – a nod to the June 4 date – so each flip of the switch is also an act of remembrance.

For decades, Chan Kin Wing has regularly attended the vigil in Hong Kong.

“I was lucky to have been born in Hong Kong. If I had been born on the mainland, I could have been one of the students in Tiananmen Square that day,” said Mr. Chan, whose parents had fled to Hong Kong from the mainland in the 1960s.

“When June 4, 1989, happened, all of Hong Kong witnessed the indelible historical event of students massacred by a corrupt regime,” Mr. Chan said.

This year, Mr. Chan plans to remember the event privately, dressing in black and changing his profile picture on social media to an image of a lit candle in the dark.

“I’ve resolved to never forget about June 4, and strive to pass on memories of it to ensure it’s never forgotten,” he said.

In mainland China, the group Tiananmen Mothers that represents victims’ relatives published an appeal on the Human Rights in China website urging the party to heed their long-held demands for a complete release of official records about the crackdown, compensation for those killed and injured, and for those responsible to be held to account.

“We look forward to the day when the CPC and the Chinese government can sincerely and courageously set the record straight and take up their due responsibility for the anti-human 1989 massacre in accordance with the law and the facts,” the statement said.

The government, however, seems intent on running out the clock on such appeals.

While Tiananmen Mothers said 62 of its members have died since the group was founded in the late 1990s, many young Chinese, it said, have “grown up in a false sense of prosperous jubilance and enforced glorification of the government [and] have no idea of or refuse to believe what happened on June 4, 1989, in the nation’s capital.”

In Hong Kong, the recent arrests and convictions of prominent activists have had a chilling effect on those who participated in the vigil in the past, said Chow Hang Tung, the vice chair of the Hong Kong Alliance in Support of Patriotic Democratic Movements of China, which operates the June 4 museum.

“There will obviously be fear and people cannot just assume that they can come and express their remembrance for the Tiananmen massacre victims and be unscathed,” she said.

Ms. Chow said that what keeps her going is the dream that China and Hong Kong can both have democracy one day. The tide, though, appears to be going in the other direction.

“This is something worth fighting for,” she said. “If one day we cannot talk about Tiananmen that would signify that Hong Kong is totally assimilated into Chinese society.”