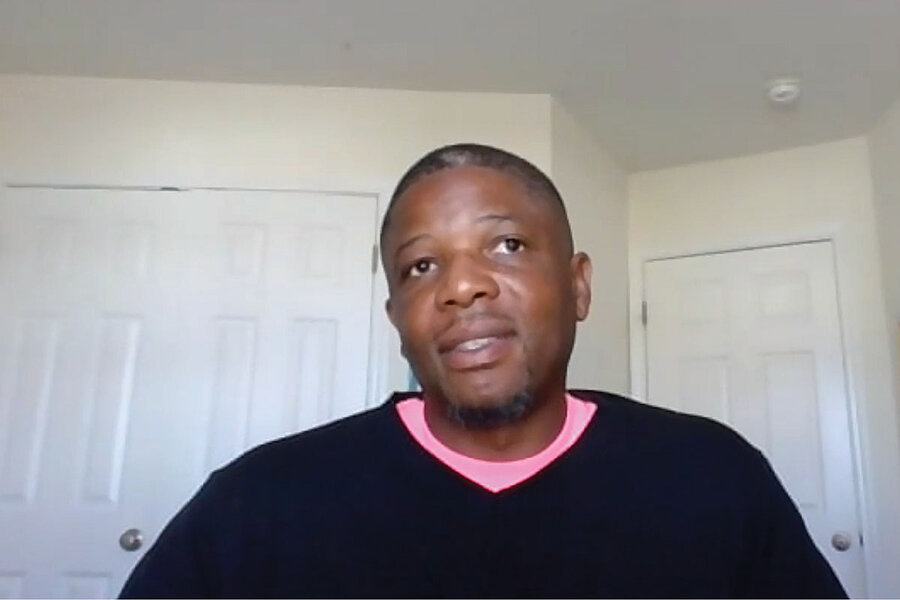 Yet despite these battles, the two men had never met in real life. As someone who follows both Twitter accounts, I wondered what would happen if I invited the two ideological adversaries for a meeting on Zoom. What sort of conversation would they have in real life compared with their usual 280-character debates about issues related to race, cancel culture, and social justice? Why do they share a mutual respect that keeps their disagreements from devolving into the ad hominem attacks that are so common on social media?

Mr. Friedersdorf is a staff writer for The Atlantic and is based in Los Angeles. Mr. Bailey is a former senior writer for The Sun News in Myrtle Beach, South Carolina. He teaches journalism at Davidson College in Davidson, North Carolina.

On a recent weekday afternoon, the three of us met on Zoom. The conversation was wide-ranging, from their backgrounds to policy arguments to moments of agreement – some of them unexpected. They came to just be Conor and Issac. And in the end, the exchange underscored something the two men had long aspired to: proving that thoughtful, respectful conversations are possible on social media, and that taking time to recognize the humanity of the person on the other side matters.

So what does it look like to respectfully disagree on a topic as fraught as race? I started out by asking how each felt about a push for racial equity by the Biden administration and private institutions.

The discussion soon turned to Issac’s past. He said he’d grown up poor in St. Stephen, South Carolina. His school was effectively segregated. It didn’t have AP classes, let alone a science lab. When his dad got drunk, he’d beat Issac’s mother. The family was also dealing with the murder conviction of one of Issac’s brothers for stabbing a white man – which Issac covered in his 2018 book, “My Brother Moochie.” The book explores why so many Black men end up in prison, and many of Issac’s other brothers also got in trouble with the law.

So he asked Conor: “How exactly would you propose actually creating an equality of opportunity for 9-year-old me and 9-year-old Conor?”

His tone wasn’t angry or accusatory – it was an earnest query. The tone of Conor’s response was empathetic.

“Equality of opportunity is a goal worth striving for,” Conor said, but believes that the equality of outcome can never be achieved given that everyone is dealing with unique and unpredictable circumstances – such as having a parent who’s abusive. Even so, he added, there are things that governments can do to improve the environment that children grow up in.

“There’s a relationship between housing and school segregation,” said Conor. “If you changed everything from zoning laws, to how school districts are drawn, to where people can live, to how much you’re allowed to build and the relationship that that has to cost, you would pretty radically transform the amount of opportunity a lot of people have.”

Later, the conversation turned to the term “woke.” It’s a slang adjective that the Oxford English Dictionary describes as “alert to injustice in society, especially racism.” Many on the social justice left initially adopted the term to describe themselves. But Issac now views the term as derogatory. Republicans now invoke “woke” as an insult, he said. “As soon as you label us as ‘woke,’ what you have done is flatten us, slurred us, demeaned us.”

Conor agreed that the term has been weaponized by some, but noted that even former President Barack Obama has used it. While terms such as “woke” or “political correctness” or “social justice warriors” can be imprecise, Conor said, they are trying to describe a real phenomenon of censoriousness and intolerance on the left. (He also decried the same for the Trumpian right.) Yet he also mentioned that Issac’s objection to the term is helpful to his writing because he wants to understand how others perceive the word.

There were areas where the two dovetailed. On Twitter, Issac recently chastised a prosecutor in Georgia for seeking the death penalty for the Atlanta spa shootings suspect, despite the fact that she’d once campaigned with her opposition to it. Conor had retweeted Issac’s thoughts.

“The political event that shaped my life earliest was two things, actually, when I was about 11. The Rodney King beating and then the L.A. riots,” said Conor. “Before then my only interaction with police officers at all had probably been one police officer coming in [to school] and talking about ‘Say no to drugs.’ And it was just a kind of sudden awakening to like, ‘Oh, wow, people in power can abuse it horrifically and then lie about it and then get away with that.’”

It was one of several instances during the meeting in which each participant made a point of proactively pointing out where they agreed with each other.

“I, too, actually have this libertarian streak in me,” Issac piped up, pointing to his defenses of free speech for those with whom he disagrees. “I even sided with the Trump administration and [former Education Secretary] Betsy DeVos, for instance, in terms of how they revamped guidelines about how to deal with rape allegations, et cetera, in colleges and universities.”

“Real people on the other side of tweets”

The gracious and conciliatory in-person conversation was a stark contrast to the pointed repartee between the two on Twitter. Both men admitted having had moments when their language on social media was sharper than it should have been. But they also try to maintain a basic level of respect.

“On my best days, I would say that I am very cognizant about my tone and also that I actually tried to get myself into a good state of mind. At least in ways that I can have these sharp exchanges, disagreements, et cetera, but not go off into, like, the crazy,” said Issac.

Indeed, both said that, even through the veil of social media arguments, both could see the good in what the other was trying to accomplish. And that has helped sharpen their own views. “Even when I actually disagree with you on these issues, I can still see that your goal really is to try to improve journalism and also discussions,” Issac said to Conor. “Over the course of time with this, I have been either actually forced to clarify my own original thinking or rethink in a subtle but important way.”

“We’re often arguing on Twitter about pretty small micro examples of different things and kind of about a meta discourse almost,” responded Conor. “It’s never like, ‘Oh, I came in with opinion A. And by the end of this Twitter thread, I am of opinion B – now they’ve persuaded me.’ It’s more like they kind of nudged my priors a little bit here and there and maybe, over time, that means a big change.”

After 90 minutes, both men warmly said goodbye to each other. A few days later, I emailed each participant individually to ask them if the Zoom conversation had affected how they now viewed the other person.

Conor replied: “Long audio conversations lend themselves to different kinds of interactions, with broader parameters and more room for nuance and expansive understandings, than do exchanges on Twitter. I certainly felt empathy for Issac when he discussed the unimaginably difficult time that he went through due to his brother’s circumstances. I think it’s probably too early to tell if our Twitter exchanges will change due to the experience. But it’s always nice to put a face and a voice to an avatar, and I very much hope that the person that I got to know better thrives in life.”

“It humanized him more for me, which is good,” Issac wrote. “I believe that has affected how I word some of my tweets, particularly when I’m reacting to something he posts. It hasn’t changed my willingness to challenge or ask follow-ups. But it has forced me to not give in to my knee-jerk [reactions] so easily with him and others, frankly. It’s kind of easier to visualize that there are real people on the other side of tweets now, not just his.”