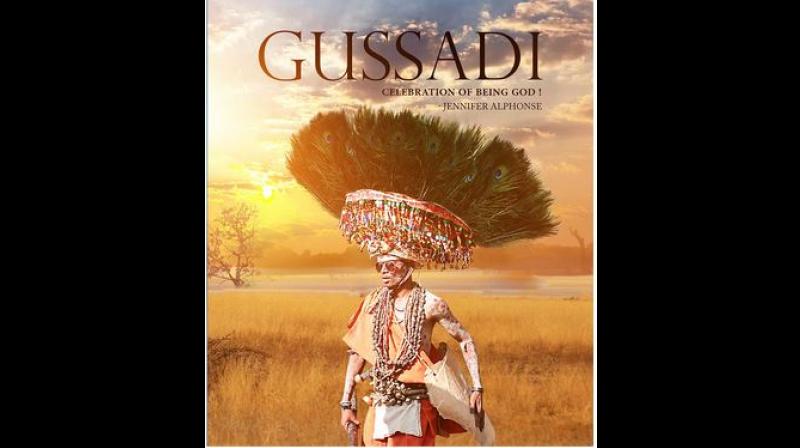 India is home to 550 tribal communities, of which 32 belong to Telangana. Among those, an ethnic ancient tribe living in Adilabad District are known for the Gussadi dance, which is performed during one of their important festivals, Dandari.

Hyderabad-based documentary filmmaker Jennifer Alphonse decided to capture the tradition in its best. She went on to make a coffee-table book using the photographs of Gussadi. Titled Gussadi, Celebration of Being God, the book features outstanding photographs of the Dandari festival, detailing each stage of the dance form.

Speaking to us about her inspiration for the book, she says, “I’d first visited Adilabad in 2014 seeking adventure and with a craving to explore remote tribal places in Telangana. I’d wanted to make a documentary on the Raj Gonds, one of Asia’s most ancient tribes,” she starts. Jennifer tells us that although the world around them has changed, the tribe’s way of living has not changed much over these past hundred years. “One day, I remember Diwali was around the corner, and that’s when I stumbled upon this spectacular, centuries-old custom of ‘Gussadi’. It completely fascinated me by its enchanting, mythic history and biting satire,” adds Jennnifer, who has made more documentary films such as Nagoba Jathara, which aired on Docubay and EpicOn, and The Kolam Tribe, which won a couple of International awards, and was selected to be screened at Los Angeles last year. “For the very first time then, I witnessed the Gussards performing the dance of the Gods. The rhythmic and robust movements with the accompaniment of the tribal music were mesmerising. It not only made for an exquisite sight but also moved me from within. That’s when I decided that I had to tell these stories.”

A book for life

Jennifer remembers the wonders of living among the Gussards and photographing them. “It was such a privilege to photograph and record them. I resonated with a phenomenal connection with these tribes, their ceremonies, the traditions, the culture and everything around the nature they live in,” she recollects.

The filmmaker also remembers how it was not easy to make the members of the tribe trust her team and her to share their stories. “But with constant effort, they opened up to us. This book is a wonderful culmination of an exhaustive six-year research and hard work,” says Jennifer beaming with pride. “In these years, I could clearly understand that Gussadi was not just a tribal dance — it’s a custom, a sacred tradition they follow.” However, in those six years, Jennifer even witnessed urbanisation in the tribe’s culture, lifestyles and geography. She knew that if they were not documented and preserved, there could be a huge loss of traditional insights. After she finished her documentary, she was struck with the idea of a coffee-table book — “an aesthetic photographic document”, as she calls it. “I believe capturing everything in the form of a book makes it permanent. Even after decades, people can learn about the tribe. Also, as a book, it would be like a window into the tribe’s mystic world,” says Jennifer. “I am really grateful and glad that we made this book! It’s first of its kind on Gussadi.”

A prayer for the future

Jennifer hopes her labour of love reaches those intended. “These photographs are for the people in these photographs,” she elaborates. “I want them to see it and feel proud of who they are and what their true identity is, so that the future generations of this tribe and students across the world can access and learn from the wonders of these tribes and their traditions.” Right through her reminisces, however, the filmmaker pauses to tell us about the one person she thinks she couldn’t have done any of it without. “None of this would have been possible without the immense support and guidance from Divya Devarajan, IAS, the District Collector of Adilabad, who is currently the Commissioner of Women Development & Child Welfare Department, Telangana,” expresses Jennifer. Incidentally, the funds that come in from the sale of the book will directly go to these tribes, she tells us. “A separate account has been opened at the Integrated Tribal Development Agency (ITDA) for that, so that it helps these tribes pursue their arts and crafts,” Jennifer adds.

Is Covid-19 treatment based on trial and error?

Nine of the most iconic dance scenes in movies