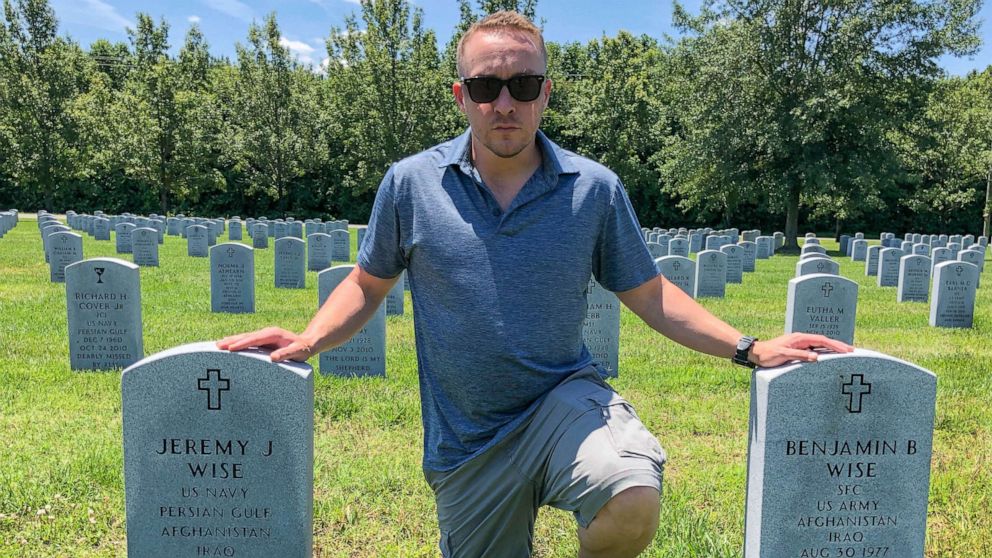 “I was kind of constantly getting pulled into various different shenanigans … mostly instigated by Jeremy. He was definitely the biggest troublemaker of the four of us,” Beau told ABC “This Week” Co-Anchor Martha Raddatz.

Beau recalls the time eldest brother Jeremy threw him down the laundry chute as part of a daring Halloween candy caper perpetrated on their only sister, Heather. Thankfully, the more pensive Ben, the middle brother, had covered the hard basement floor with laundry before young Beau came tumbling down the chute.

When the plot inevitably was foiled by parents, Jeremy and Ben absorbed the brunt of the punishment.

“I’ll always have your back, Beau,” Jeremy said afterward.

As Beau came of age he would again follow his brothers — this time into the military, into the world of combat, into Afghanistan.

But Jeremy and then Ben wouldn’t return. In just over two years, one explosion and one firefight would leave Beau the oldest living Wise brother, earning him the Department of Defense’s unwelcome designation of “Sole Survivor.”

They describe the brothers coming of age in the Wise home, with inter-sibling rivalry and criticism more often than not revealing itself to be a form of caring.

When Beau went through a growth spurt, catching up in size to Ben, the two became adversaries. When one fight became too heated, too physical — Beau throwing a punch at Ben and Ben sending Beau crashing into an armoire, cracking its frame — Jeremy, who usually played spectator during these adolescent spats, intervened, pulling Ben out of the room for a talk.

When the two returned, Ben hugged Beau, apologized and asked for forgiveness.

“Before I could answer, Jeremy stepped beside both of us and placed his hands on the shoulders of his younger brothers. Ben then stared at the floor and placed his hand on my opposite shoulder as we waited for the oldest to break the silence. ‘Guys, listen to me,’ Jeremy began. ‘Someday, we’ll be old. We also might be fat, bald and broke. Maybe our wives will leave us and we’ll have absolutely nothing left in the world. But even then, we’ll be lucky — and do you know why?’ he continued. ‘We’ll always have each other. No matter what happens, you’ll always have two brothers to lean on,'” Beau recalled in “Three Wise Men.”

Their mother often regaled them with stories of great adventure and heroism from the family’s history of military service. As men, the brothers would join that legacy, each in his own way.

Ben, eager to serve, joined the Army and went on to become an elite Green Beret sniper. Jeremy, dead-set on becoming a Navy SEAL, realized his own elite goal, eventually going on to work clandestine operations as a CIA contractor.

Beau favored the stories of his Marine Corps relatives — one who fought through the ferocious World War I Battle of Belleau Wood, another who was a commando with the deadly Marine Raiders of World War II. The “every Marine a rifleman” ethos also appealed to him and he joined the Corps’ famed infantry as a machine gunner.

On Dec. 30, 2009, Jeremy, while working as a security contractor for the CIA in Khost, Afghanistan, was killed in a blast when an informant-turned al-Qaida double agent detonated a suicide vest on Forward Operating Base Chapman. Six other American CIA operatives also were killed, making it one of the deadliest days for the CIA, second only the Beirut bombing of 1983.

Beau was in Afghanistan, south of Khost in Helmand Province, when he got the news.

“Immediately, the first response was absolute anger,” Beau told Raddatz. “And then — I just — the shock came over, and it was just numb for a while.”

Beau knew Jeremy was operating in Afghanistan, but only learned his brother was working with the CIA after he died.

In 2010, Jeremy was honored on the CIA’s Memorial Wall at the agency’s headquarters in Langley, Virginia. Beau visited to see his brother’s place on the wall for the first time on Thursday, also speaking with CIA Director William Burns.

“I just wanted to ask you about Jeremy Wise, whose name is here — contractor, former Navy SEAL. I know you talked to his brother today,” Raddatz said to Burns.

“I did, which was a privilege, because Jeremy Wise, as you well know, a remarkable patriot, a SEAL before he came to CIA, in a family of remarkable patriots, and he was killed – one of seven CIA officers who was killed in Khost Afghanistan in 2009 on one terrible day, one of the worst tragedies in the history of the CIA,” Burns said.

Some of those recognized on the wall are named, like Jeremy, while some are not. Burns said it is the nature of clandestine work.

“This memorial wall is hallowed ground for CIA, it now holds 137 stars, each one marking a CIA officer who was killed in the line of duty,” Burns said. “Sadly, a few days ago at our annual memorial ceremony, we added four new stars to this wall.”

In his book, Beau recounts the limousine ride to Jeremy’s funeral, and Ben saying, “I can’t believe I’m the oldest brother now.”

Less than two years later, Beau would make the same limousine ride to the same Virginia cemetery. This time with no brother at his side.

“In that surreal moment, I came to the same somber realization that Ben had reached 22 months earlier,” Beau wrote. “I was now the oldest living Wise brother.”

Like Jeremy, Ben died from wounds suffered in Afghanistan.

“He was breaching a cave in Balkh Province, Afghanistan, and as he was going around the entry hole … he took eight to 10 rounds that traveled south to north through his chest, legs and groin,” Beau told Raddatz. “And he was a fighter and he fought for six days. And they eventually lifted him to Landstuhl Hospital in Germany, and after six days, he eventually succumbed to his wounds.”

Beau and Ben’s wife, Tracy, made it to the hospital to see Ben in his final moments.

“I just went numb, that seems to be my initial response to grief. It’s just the shock and then almost immediately, just numb,” Beau told Raddatz.

“Did you go through a period where, ‘Why us? How is this possible to lose two brothers?'” Raddatz asked.

“I went through a period of ‘Why them?’ I think, and it doesn’t make any sense looking back now, but one of the things that I always thought about was the fathers — why the fathers were lost,” Beau said. “And I think you find a way to justify survivor’s guilt, and that’s how you know you’ve got it.”

As the sole survivor, Beau was told by then-Marine Commandant Gen. James Amos that he would not be put in harm’s way — the only service member to be kept from combat in the Afghanistan war for such a reason. Beau, as much a warrior as his brothers, resented it at the time.

Sileo, who formed a deep friendship with Beau while co-writing their book, said the moment he heard the story he wanted to help tell it.

“The Wise family has sacrificed tremendously at an unprecedented level. But I think their story also represents this generation of warriors for almost 20 years now who stepped forward since 9/11. Jeremy said it himself. He said, ‘Those people in the World Trade Center couldn’t fight back. I can.’ And then when Ben was at that cave, he told somebody with him, ‘I’ll go.’ And I think the way this generation of volunteer warriors has stepped forward is so important for all Americans to think about, especially at a time like Memorial Day,” Sileo said.

“Every single day is Memorial Day for them,” he added.

While glad of the ongoing U.S. withdrawal from Afghanistan, Beau said one of his fears is that the end of the war will leave only a pale memory of those who died. It’s one of the reasons he wrote his book.

Beau left active-duty service in 2016. He and his wife, Amber, have since adopted a son and daughter.

“Even though our kids never got to meet my brothers,” Beau wrote in the afterword of “Three Wise Men,” “they will most certainly grow up learning about the heroism of Uncle Jeremy and Uncle Ben.”