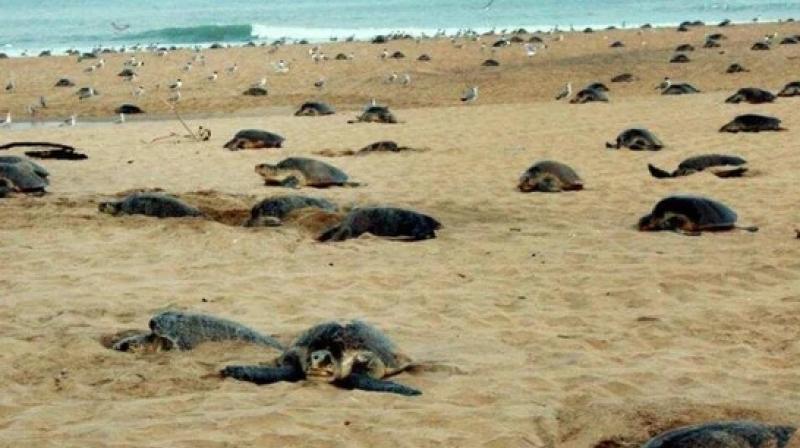 Nellore: The Olive Ridley conservation programme launched by the AP forest department is not only protecting hatchlings from their natural enemies, it is also providing livelihood to fishermen in coastal areas of the state.

The department has hired local fishermen on daily wages and is providing them materials for creating hatcheries across the coast. The job of these fishermen is to collect eggs from the Olive Ridley nests, relocate them to hatcheries and protect them over a period of 45–50 days till they hatch and baby Olive Ridley turtles get into the sea to start their life.

“As only one in 1,000 turtle hatchlings survives, the efforts of our department, in collaboration with TREE Foundation, is to enhance the survival rate of Olive Ridley hatchlings,” said Y.V.K. Shanmukh Kumar, district forest officer of SPSR Nellore. He said roping in local fishermen in conserving Olive Ridley turtles is paying rich dividends, apart from being an educating exercise for children belonging to the fishing community.

Shanmukh Kumar disclosed that AP forest department is coordinating with Indian Coast Guard and Marine Police in dealing with trawlers that pose a threat to mother turtles during the arribada (arrival by sea) season.

The forest department has established 11 hatcheries in Nellore district alone and has employed 30 local fishermen as part of its “Sea Turtle Protection Force”. This force has successfully collected about 57,000 eggs and has released 46,891 hatchlings into the sea till April end.

As Sunday, May 23, is the World Turtle Day, the district forest officer said along with TREE Foundation, they are organising awareness programmes for public about Olive Ridley turtles and efforts being made for their conservation.

Shanmukh Kumar said roughly 8,000 more hatchlings have been released into the sea this year compared to last year.

Fridge rules: How to clean and categorise the most important part of your kitchen

Is Covid-19 treatment based on trial and error?