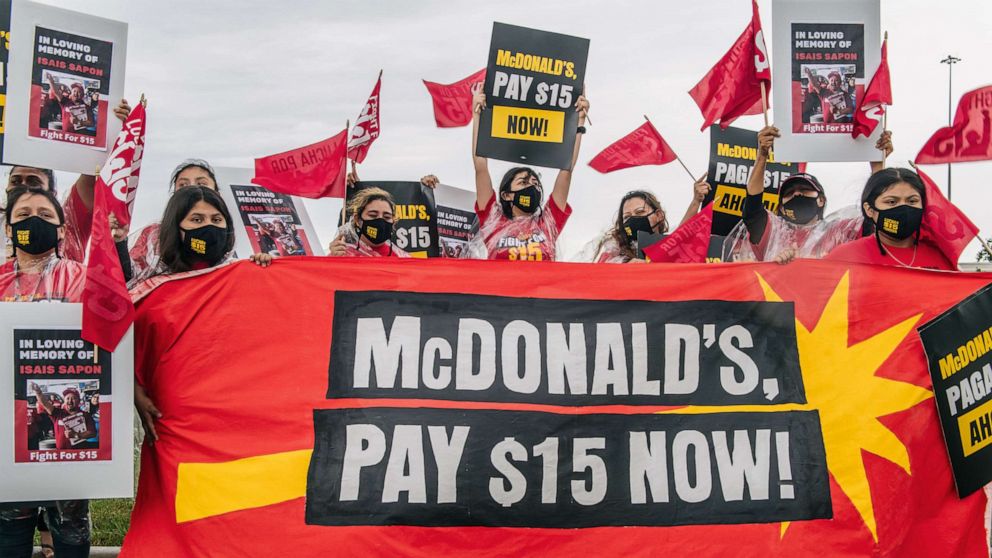 A handful of major restaurant chains across the nation have recently announced that they are raising wages in a bid to attract workers as they finally begin to reopen at full capacity.

As the coronavirus pandemic eases and patrons — fueled by pent-up demand and stay-at-home fatigue — flock to eat out, some workers and advocates see this apparent labor shortage as an opportunity to call for industry-wide wage reform.

“It’s time for everyone, every worker in the U.S., to be heard,” Carlos De Leon, 40, who has worked at a Chicago-area McDonald’s franchise for 10 years but still does not earn $15 an hour, told ABC News through a Spanish translator.

De Leon, a single father of three, said he is participating in a strike on Wednesday organized by the Fight for $15 advocacy group to demand higher wages.

“We know that McDonald’s earns a lot of money, they made a lot of money during the pandemic, and they haven’t really offered it to any of us workers who are with risking our health working during a pandemic,” he said. “We’re fighting for our kids. As parents, we need better wages to give them better lives.”

The federal minimum wage has remained unchanged for over a decade at $7.25 an hour. Recent demand for staff, meanwhile, has pushed the average hourly wage of workers at food and drinking establishments to $16.28 an hour in March, the highest on record, according to preliminary data from the Labor Department.

Even without a federal mandate, some eatery chains are raising wages just to stay competitive.

On Tuesday, White Castle said it was testing a pilot program at more than three dozen Detroit-area locations where new employees will receive a starting wage of $15 per hour.

Late last week, McDonald’s announced it will be raising hourly wages for workers at McDonald’s-owned restaurants by an average of 10%. The company said these wage increases will bring the pay range for entry level crew to between $11 and $17 an hour.

McDonald’s announcement comes just days after Chipotle committed to raising wages to result in a $15 average hourly wage for its staff by the end of June. The same day as Chipotle’s announcement, Sheetz said it was raising wages by $2 an hour for all of its store employees.

“The fact that we’re seeing businesses, and especially large chains, actually commit to wage increases to me signals that they perceive a longer-term challenge with respect to attracting workers,” Daniel Zhao, the senior economist and data scientist at hiring site Glassdoor, told ABC News.

“When we first started hearing about these labor shortages, the first responses that we were hearing from employers were that they were offering hiring bonuses or interview bonuses, and those represent a temporary increase in compensation,” he added. Veering from one-time bonuses to wage increases could signal that employers “perceive a structural issue in the long-term, where they need to raise wages in order to actually attract workers.”

This puts immense pressure on competitors, Zhao added, “Whether they’re smaller chains or mom and pop restaurants or even just other employers in the local labor markets who are competing for the same workers.”

McDonald’s and Chipotle’s wage increases come on the heels of similar news from Amazon, Costco and Walmart. They also follow employee protests.

The McDonald’s pay increase announcement, however, does not apply to its franchises, which comprise a majority of its restaurants — including the one where De Leon works. This is in part why he is demonstrating Wednesday to demand the same at his restaurant.

“It’s not fair,” De Leon told ABC News. “That should be for all of us, because all of us wear an ‘M’ on our uniform.”

Throughout the course of the pandemic, many front-line restaurant workers bore the brunt of the crisis as essential workers while their white-collar counterparts had the privilege of working from home. In addition to wages, fears of catching the virus is also cited by many as being a factor in restaurant workers’ reluctance to return to work.

Some 4.2 million adults aren’t working because they are afraid of getting or spreading COVID-19, The Wall Street Journal reported last month, citing a U.S. Census survey conducted in the second half of March.

Meanwhile, some GOP lawmakers argue that enhanced unemployment insurance benefits are deterring people from returning to work, claims largely refuted by economists. Democrats have pointed to this as highlighting the need for higher wages.

Zhao cited the pandemic as the “largest factor causing these reported shortages.”

“We know that the pandemic presents a lot of challenges for workers, whether it’s health risks or child care needs,” he said. “And that means that workers are unavailable or unwilling to return to work while the pandemic is still going on.”

If restaurants and fast food chains want to attract more workers, De Leon said the first thing they can do is offer better wages, and the second is “give us everything that we need to feel safe working during the pandemic.”

De Leon said that at the beginning of the pandemic, he and his coworkers had to ask for things like personal protective equipment and hand sanitizer.

“With all of the money that McDonald’s has and makes, they could and need to invest in their workers,” he said. McDonald’s reported $5.12 billion in first quarter revenue last month.

The company didn’t specifically respond to a question about raising wages for franchises workers.

“McDonald’s is lucky to have the hardest working and most dedicated restaurant crew in the industry, who have tirelessly served our communities during this challenging year,” McDonald’s USA said in a statement to ABC News, noting the hourly-wage increase at McDonald’s-owned restaurants.

McDonald’s did share a comment from Mark Salebra, the chair of the U.S. National Franchisee Leadership Alliance, who stated: “In order to drive growth in a challenging hiring market and best serve our customers, it is imperative that we attract and retain exceptional talent in our restaurants, and we proudly offer a variety of unique employee programs and benefits locally as franchisees.”

“To remain employers of choice and further differentiate what we have to offer, owner/operators are leading an effort to implement an enhanced Employee Value Proposition,” Salebra added. “This platform includes a set of industry-leading best practices on pay and benefits that independent owner/operators can implement however they deem appropriate to stay competitive in their local markets.”

Losses double at Irish arm of Gamestop to €7.6m as revenues plummet