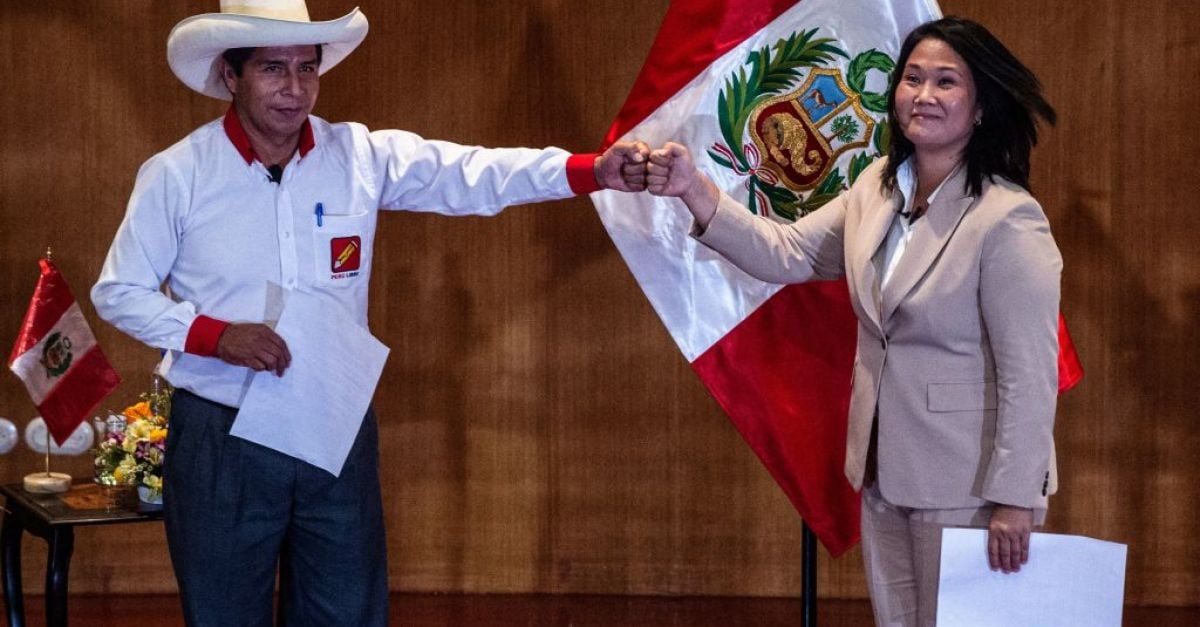 In early May, Keiko Fujimori addressed her supporters wearing the white-red Peru soccer jersey that has become her campaign attire as her bid for the Andean country’s presidency has gained pace ahead of a run-off vote on Sunday.

The 46-year-old heir of the controversial Fujimori dynasty pledged to maintain stability in the country amid a polarising race with socialist rival Pedro Castillo who has won support, especially among the poor, by pledging to tear up the status quo.

“We must act firmly and resolutely. That is what I offer, a mother’s firm hand. With a firm hand so that things and government plans are fulfilled,” said Fujimori, who has two children with her U.S. husband.

The eldest daughter of jailed ex-president Alberto Fujimori, she has been in politics since her youth, appearing as a 19-year-old ‘first lady’ with her father during his divisive administration in the 1990s, as a lawmaker and twice before running for the top office.

She carries a huge weight of her family name. Her father is serving a prison sentence for corruption and ordering death squads to carry out massacres that killed 25 people during a crackdown on leftist insurgents.

The younger Fujimori, who strongly divides voter opinion, has herself served time behind bars in pre-trial detention over money laundering allegations related to Brazilian firm Odebrecht that she denies.

“Keiko’s problem is the baggage she carries, one is her father’s and the other is her own,” said political analyst Fernando Tuesta.

The conservative, market-friendly candidate has looked to play up her mainstream credentials, winning establishment voters especially in capital Lima who fear Castillo’s plans to redraft the constitution and nationalize key sectors of the economy.

The two candidates are neck-and-neck in polls ahead of the ballot with most pollsters calling it a technical tie.

Supporters of Boston University-educated Fujimori, including Nobel prize-winning author Mario Vargas Llosa, say she offers the only route to maintain stability in the copper-rich country that has been a relative safe-haven for investors.

“We must mark the “K” (for Keiko) whether we like it or not, because it’s the only way not to fall into communism for our future,” said Paola Bozo during a march to support her.

Fujimori, the leader of the Popular Force party, has also played up her security credentials, which was put under the spotlight by a deadly attack by Shining Path rebels last month, the same group her father had fought decades before.

“Fujimorismo defeated terrorism,” she said in late May after the attack. “What the terrorist groups seek is to paralyse us, to generate fear, and we must not allow it.”

At the same time, she has tried to soften the shadow of her past, apologising several times for her father’s “political mistakes”, while praising his social politics.

Fujimori has said that if she becomes president she will grant a humanitarian pardon to her father, now 82, a descendant of Japanese immigrants who came to Peru last century.

“I want to tell my father that today more than ever, as his daughter, I am proud of the work he did, thanks to him today the country lives in peace,” Keiko said during a campaign tour.

Many Peruvians, however, still have strong feelings against the Fujimori family, blaming them for rampant political corruption that has dogged Peruvian politics for years.

“We want a democratic change that does not involve corruption, nor a mafia called Fujimori,” said Miguel Coronado, a young Peruvian who marched in anti-Keiko protests.

“The Fujimori family does not represent this country, the country is this here, the people in the streets.” – Reuters