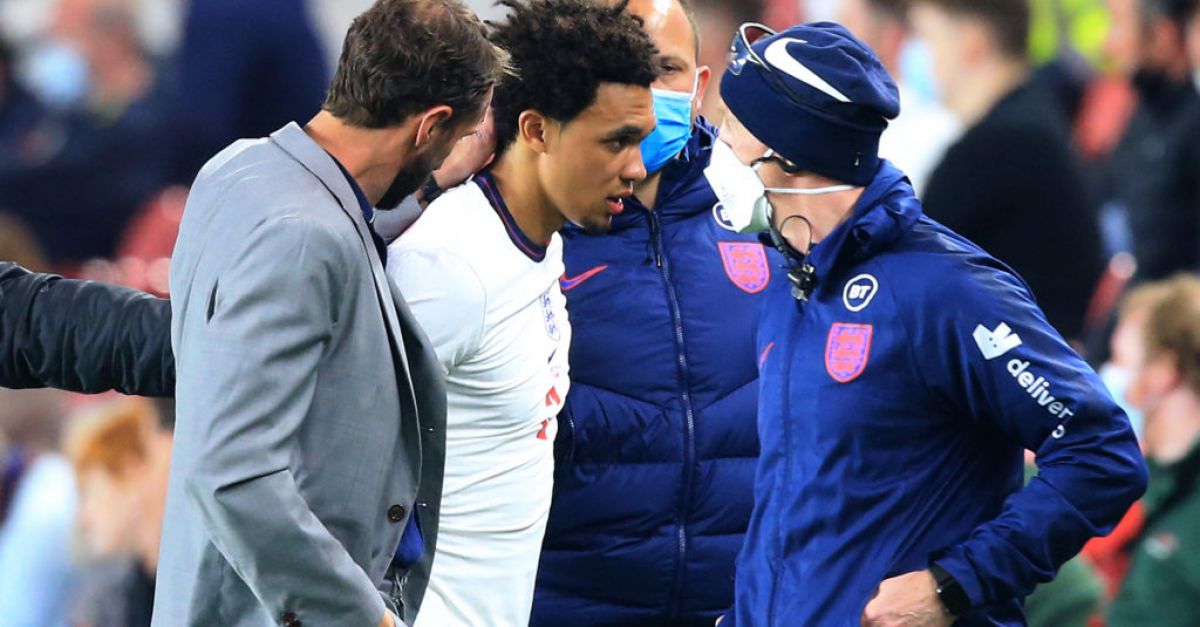 Trent Alexander-Arnold has been ruled out of the European Championship after suffering a thigh injury in Wednesday’s friendly win over Austria.

The Liverpool defender limped off in the closing stages of the 1-0 victory, with England Gareth Southgate offering a grim prognosis immediately after the game.

His fears were realised when scans revealed the extent of Alexander-Arnold’s injury — with the Football Association confirming his withdrawal on Thursday.

Wishing you a speedy recovery! 💪

“Trent Alexander-Arnold has been ruled out of UEFA EURO 2020,” a statement said.

“The Liverpool player sustained a thigh injury in the closing stages of Wednesday’s 1-0 win against Austria in Middlesbrough.

“A scan on Thursday confirmed the 22-year-old will be unable to play in the forthcoming tournament so he has withdrawn from the England squad to return to his club for rehabilitation.

“Gareth Southgate will not confirm a replacement until after Sunday’s return to the Riverside Stadium for the warm-up fixture against Romania.”

“Trent is obviously not a good situation, that he’s had to walk off the pitch and in some discomfort,” Southgate said after the win.

Alexander-Arnold’s injury added to absentee-hit England’s headaches, which led 2018 World Cup semi-finalist Jesse Lingard to start the day after Southgate decided against including him in his final selection.

Lingard is now one of the five outfield players on standby waiting to discover if they will be selected to replace Alexander-Arnold in the squad.

Defenders Ben White and Ben Godfrey, who both made their debuts off the bench against Austria, as well as midfielder James Ward-Prowse and striker Ollie Watkins are the others who Southgate can call upon.

Alexander-Arnold’s own place in Southgate’s 26-man pool was much-debated in recent weeks after he had been omitted for a World Cup qualification triple-header in March.

He returned to the provisional 33-man squad last week and made the cut for the Euros as one of four right-backs alongside Kieran Trippier, Kyle Walker and Reece James.

Manchester United’s players were due to join the group on Thursday, with Luke Shaw, Dean Henderson and Marcus Rashford joining up along with injured Harry Maguire following the Europa League final loss to Villarreal.

Chelsea and Manchester City are set to follow in the coming days after last Saturday’s Champions League final clash in Porto as preparations continue at England’s north-east base ahead of Sunday’s final friendly against Romania.

“All the (omitted) players are going to stay with us through to the end of Sunday’s game anyway,” Southgate said. “Obviously we’ll make an assessment on the whole squad once we’ve got through that game.

“I’m very conscious we’ve got another 90 minutes to get through and that alone is a bit of a challenge for us, really.”