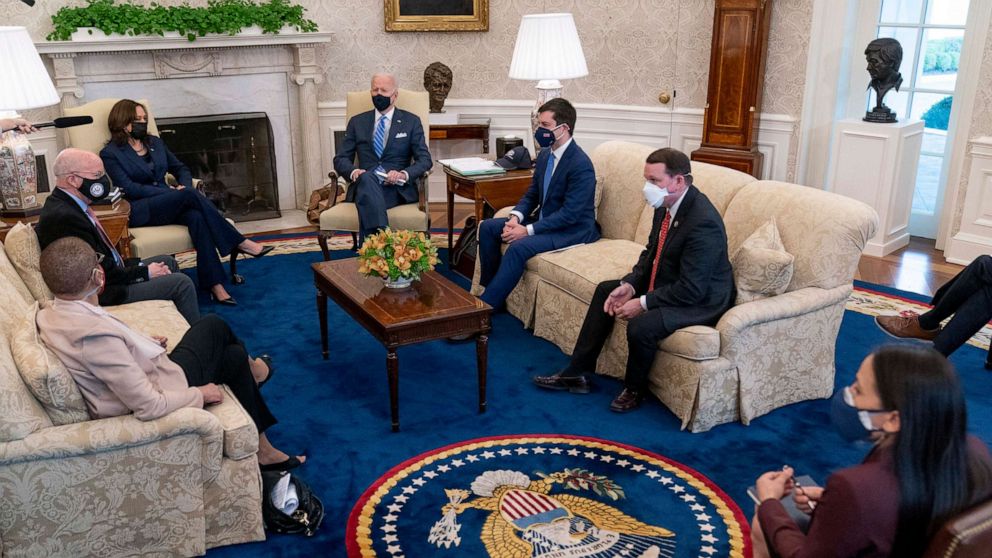 Even as the price tag has shrunken, the stakes surrounding a possible infrastructure deal have managed to grow.

President Joe Biden and his administration are giving themselves and GOP lawmakers a little less than a week to come up with a framework of a deal. If it doesn’t come through, it will be on Democrats to get done what they can on their own — marking a change of course that has ramifications for the rest of the Biden agenda.

Public signals from both sides suggest a willingness to cut a deal, with Transportation Secretary Pete Buttigieg saying on ABC’s “This Week” Sunday that there’s “movement in the right direction.” But other forces are pushing both the White House and GOP senators farther away.

Tensions are running high after last week’s Republican filibuster of a Jan. 6 commission, which happened after moderate Democrats pleaded publicly with their colleagues to find common ground. That has put more pressure on those Democrats to agree to changes in Senate rules to get legislative wheels moving.

Meanwhile, dramatic events in Texas over the weekend, where Democrats blocked new voting-rights restrictions with a last-minute walkout, are underscoring the importance of a national Democratic priority: new federal voting protections and expansions. That’s another area where the Senate filibuster looms large.

On infrastructure, the president has said repeatedly that “inaction is not an option.” But as the major players are aware, acting without Republican buy-in would have consequences.

Biden travels to Oklahoma, as Tulsa marks the 100th anniversary of race riots that demolished a thriving Black neighborhood and killed a countless number of its residents.

He’ll tour the Greenwood Cultural Center and meet with the only known living survivors.

The president has repeatedly pledged to root out institutional racism. Though no singular visit, photo op or speech can accomplish that on its own, the consistent acknowledgment of racial violence sets Biden apart from many of his predecessors.

“The Biden-Harris Administration is committed to acknowledging the role Federal policy played in Greenwood and other Black communities and addressing longstanding racial inequities through historic investments in the economic security of children and families, programs to provide capital for small businesses in economically disadvantaged areas, including minority-owned businesses, and ensuring that infrastructure projects increase opportunity, advance racial equity and environmental justice, and promote affordable access,” said Biden in a proclamation on the Tulsa Race Massacre.

The acknowledgement is an attempt to atone for one of the nation’s sins, but acknowledgement alone won’t suffice. The sort of atonement due to the survivors and their descendants cannot simply be accomplished through pleasantries and platitudes, but in concrete legislative action.

Biden is expected to announce a federal initiative aimed at boosting contracts with “small disadvantaged businesses” by 50%, which would translate to an additional $100 billion over five years. Activists have pointed to reparations as a method to rectify the lasting legacy of the massacre. While Biden has indicated support for a bill that orders a commission to study reparations cost, it hasn’t yet been called for a vote in the House.

The dramatic conclusion of the Texas legislative session came on Monday, but questions remain about what comes next regarding several Republican priority bills, including Senate Bill 7, which sought to revise and restrict the state’s voting parameters.

On Sunday, Democrats walked off the House floor before a late-night vote could have pushed SB7 across the finish line. The move killed the controversial bill for now, but Gov. Greg Abbott insisted it must pass and said he will call for a special legislative session to advance the bill to his desk.

“I expect legislators to have worked out their differences prior to arriving back at the Capitol so that they can hit the ground running to pass legislation related to these emergency items and other priority legislation,” Abbott said in a statement on Monday. A special session is already slated to happen in the fall to address redistricting, but it is unclear whether another session would be added to address the priority bills earlier in the year.

In the meantime, Abbott is also threatening to veto a provision of the Texas budget that funds the legislative branch, tweeting, “No pay for those who abandon their responsibilities. Stay tuned.” If the governor were to follow through with such a move, legislative agencies, as well as lawmakers and staffers on both sides of the aisle, would be affected.

FiveThirtyEight’s Politics Podcast. In New York City’s Democratic mayoral primary, some of the strongest disagreements within the party will be decided by some of its most devoted voters. Questions about how to handle policing, unemployment, housing, education and other issues of pandemic recovery will be posed to a city with 3.7 million registered Democrats. In the run-up to the June 22 primary, the FiveThirtyEight Politics podcast spends some time tracking what the race can tell us about urban politics and the future of the Democratic Party. In this installment, New York City-based political reporters Gloria Pazmino and Erin Durkin discuss the current lay of the land in the Democratic primary and the issues that are motivating voters. https://53eig.ht/3wAOkHK