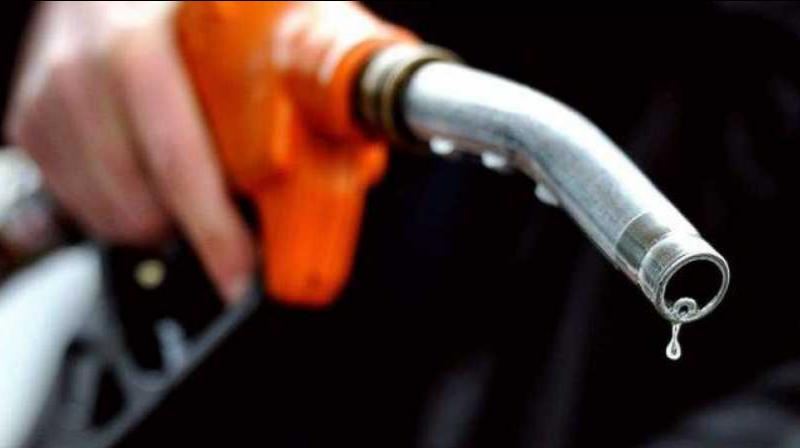 New Delhi: After Rajasthan, Madhya Pradesh and Maharashtra, petrol price has crossed the Rs 100-per-litre mark in Leh, in almost all districts of Andhra Pradesh and parts of Telangana after fuel prices were again hiked on Friday.

Petrol price was increased by 27 paise per litre and diesel by 28 paise a litre, according to a price notification of state-owned fuel retailers.

The hike – 18th in the last one month – took fuel prices across the country to a historic high.

Fuel prices differ from state to state depending on the incidence of local taxes such as VAT and freight charges.

Petrol price is well above the Rs 100-per-litre mark in all districts of Rajasthan, Madhya Pradesh and Maharashtra – the states which levy the highest value-added tax (VAT) in the country.

Retail prices have risen after an increase in international oil prices on investors' optimism that improving demand and a dwindling supply glut may mean the market can absorb any additional production from OPEC and its allies.

Brent crude – the global oil-price benchmark, has risen above USD 71 per barrel for the first time in two years.

Petrol is sold at over Rs 100 per litre in almost all districts of Andhra Pradesh, except Vizag where it costs 99.75 a litre. Diesel in Vizag is priced at Rs 94.08 per litre.

Rajasthan levies the highest VAT on petrol and diesel in the country, followed by Madhya Pradesh, Maharashtra, Andhra Pradesh and Telangana.

Mumbai on May 29, became the first metro in the country where petrol was being sold at over Rs 100-a-litre mark. Petrol now costs Rs 100.98 per litre in the city and diesel comes for Rs 92.99.

The increase on Friday is the 18th increase in prices since May 4, when state-owned oil firms ended an 18-day hiatus in rate revision they observed during assembly elections in states like West Bengal.

Rates are at the highest in the country in Sri Ganganagar district of Rajasthan where petrol comes for Rs 105.81 a litre and diesel for Rs 98.64 per litre. Madhya Pradesh's Shahdol district has petrol priced at Rs 105.18 a litre and diesel at Rs 96.31.

Oil companies revise rates of petrol and diesel daily based on the average price of benchmark fuel in the international market in the preceding 15-days, and foreign exchange rates.

Members of the Organization of the Petroleum Exporting Countries and their allies, a group known as OPEC+, earlier this week agreed to continue relaxing curbs on oil production, signalling their confidence in improving oil demand and a drop in the global supply glut.

The rollout of vaccines is helping governments to reduce coronavirus restrictions and resume more normal economic activity. That will help pare global oil stocks – which at one point last year threatened to overwhelm the world's ability to store them.

Losses double at Irish arm of Gamestop to €7.6m as revenues plummet