In this article, two works of one master are combined into one … One article talks about making an adapter for a soldering iron, and the second about protecting a Makita battery from discharging. The works overlap, so they were combined into one.
The TS100 soldering iron is a very handy tool, including its mobility and flexible power supply requirements.
The soldering iron comes with an AC adapter, but it can be powered from a variety of sources.
Instead of carrying a large unit with you power supply for the TS100, the craftsman decided to make some small, lightweight adapters so that he could use the soldering iron with whatever power source he has: DC adapter, laboratory power supply and drone battery (XT60 3S +)
Apart from these power supplies, he has several large capacity Makita batteries and decided to make a simple XT60 adapter that can interface with the XT60 plug power cable of a soldering iron.
These batteries have some features that make them especially suitable for this kind of user applications:
They have built-in discharge protection * to ensure that the battery does not discharge to zero.
Its relatively high voltage and capacity.
Additional protection features.
Built-in Battery Level Indicator
* Makita batteries themselves do not cut off power when they are discharged, and this is a custom option. More details about battery protection can be found in the last step of this article.
When making an adapter, you need the following
Tools and materials:
For adapter
-3D-printer;
-Soldering iron TS100;
-Crimping tool;
-Makita battery connector (Makita 644808 8);
-XT60 plug;
-Rectangular cable lugs with a diameter of 6.6 mm – 2 pcs;
-2.8 mm terminals; -MOS transistor IRFP3006;
-Radiator TO-247;
-M3 K-247 plastic insulator; – Silicone gasket TO-247; -Nuts M4 – 4 pcs; -Screws M4 x 28 mm countersunk screw – 4 pcs; -Square nut M3; -Screw M3 x 8 mm; -Heat shrink tubes; -Wires; -Epoxy resin; -Battery Makita;
For protection circuit
-N-channel MOSFET
IRLB8721;
IRFP3006;
2N7000; -MOS-transistor with channel P (IRF5305);
-Resistor 10 kOhm;
-Resistor 100 Ohm;
-Heavy wire;
-Mounting plate; Step one: model development
Before proceeding with the modeling of the adapter, you need to determine the requirements/goals of the project.
Design requirements:
Compatible with Makita 644808 8
Output to plug XT60
The adapter should be as compact as possible
The parts should be 3D printed
Easy assembly
The wizard used Fusion 360 for modeling and started by making part 644808 8. In essence, this part should be installed in the battery and the XT60 plug should already be installed in it.
There is also another connector -643852 2 (yellow). It is slightly different from the black connector and is made for Makita model 643852 2.
He designed the adapter base so that it can be easily adapted to the project without the need for much modification.
To install the cover, the master designed two interchangeable versions: one uses a nut added during printing, and the other uses threaded inserts.
The version he used in this project was with a nut.
To keep the terminal connector securely in the adapter, he designed a small terminal clip that holds the terminal connector in place after the parts are screwed together.
Initial Before he knew that Makita batteries by themselves did not cut off power when discharged, he made an adapter cover that was smaller. Although it is included in the files for printing, the wizard does not recommend using it.
The adapter cover has three key features:
It must have a hole where the XT60 plug can be inserted.
Ample room for parts to fit.
Four screw holes that match the nuts/inserts in the base adapter . 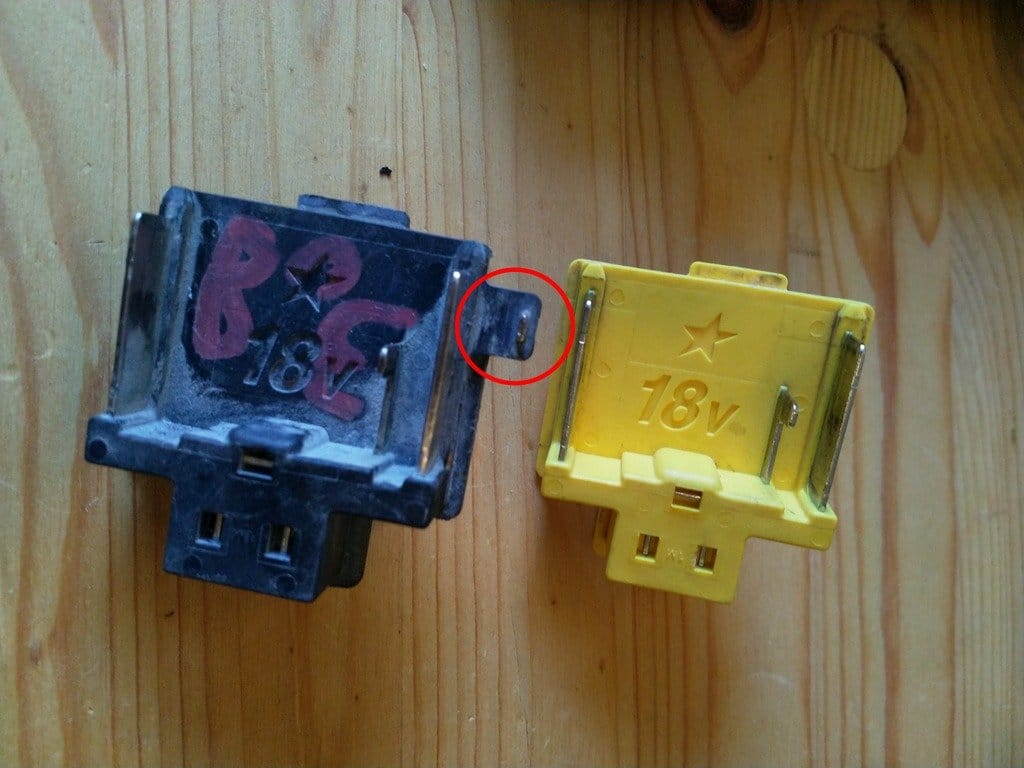 Step two: 3D printing
After designing, you need to print the parts. All files for printing the enclosure can be downloaded here.
He printed the base of the adapter and the connector retainer in black PETG, and the cap of the adapter in orange PETG.
Depending on the use, the MOSFET can get very hot. Therefore, he would recommend printing parts with something more heat-resistant than PLA, at least PETG, and even better ASA or ABS, since there are no cooling vents in the model.
The base of the adapter should be printed with supports .
When printing the adapter cover, you need to pause the printing by about 5.2 mm to add the locking nuts. 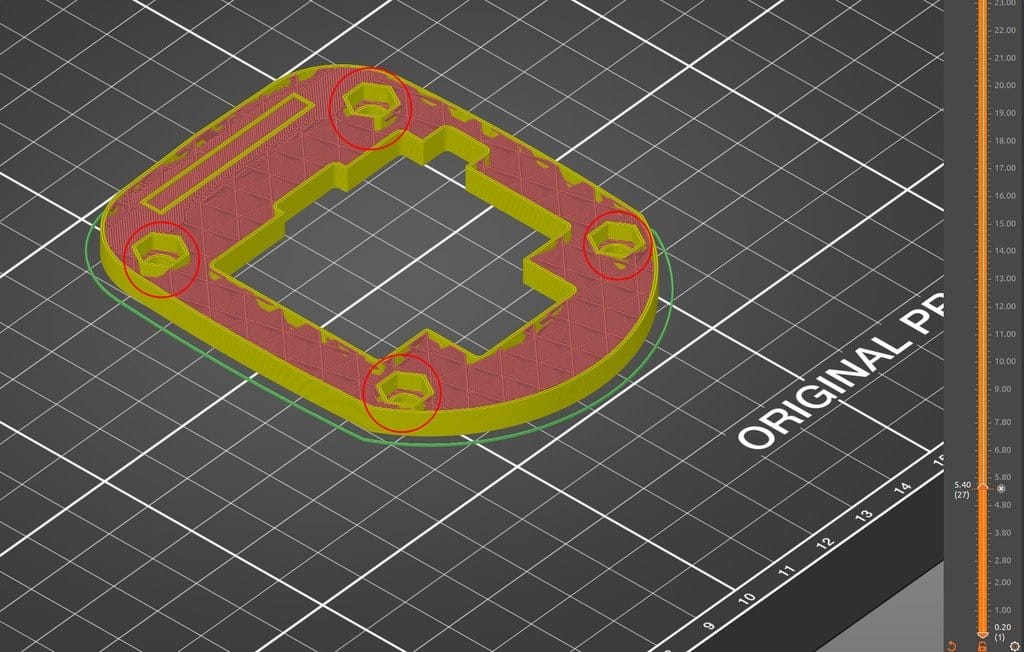 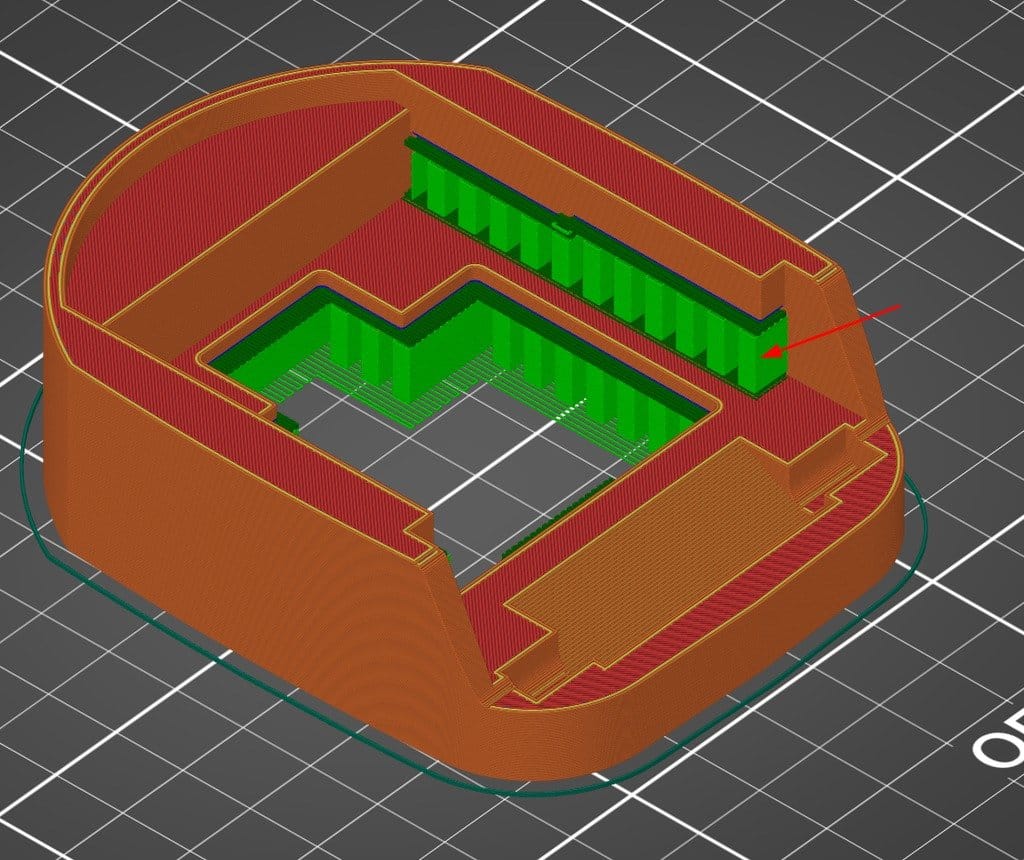 Step three: assembly
After printing, you can start assembling. He started by adding all the crimp connectors to the wires and pre-soldered the black and yellow wires to the MOSFET and the red and black wires to the XT60 plug.
The wires he used were from an old ATX power supply. Then I assembled the discharge protection circuit (see next step).
After making sure that the protection circuitry was working properly, he glued the XT60 plug with two-component epoxy.
After the glue dried, all that was left was to install the rest of the components.
Starting with the MOSFET, insulator, silicone gasket, heat sink, all of them secured with an M3 screw and an M3 square nut inserted into the mounting post of the adapter cover.
Now you can assemble the adapter itself.
The first step was to connect the crimp connectors. Before connecting them, it is important that the terminal retainer is on the wires in the correct orientation.
The last step is to tighten the four M4 screws in the adapter cover. 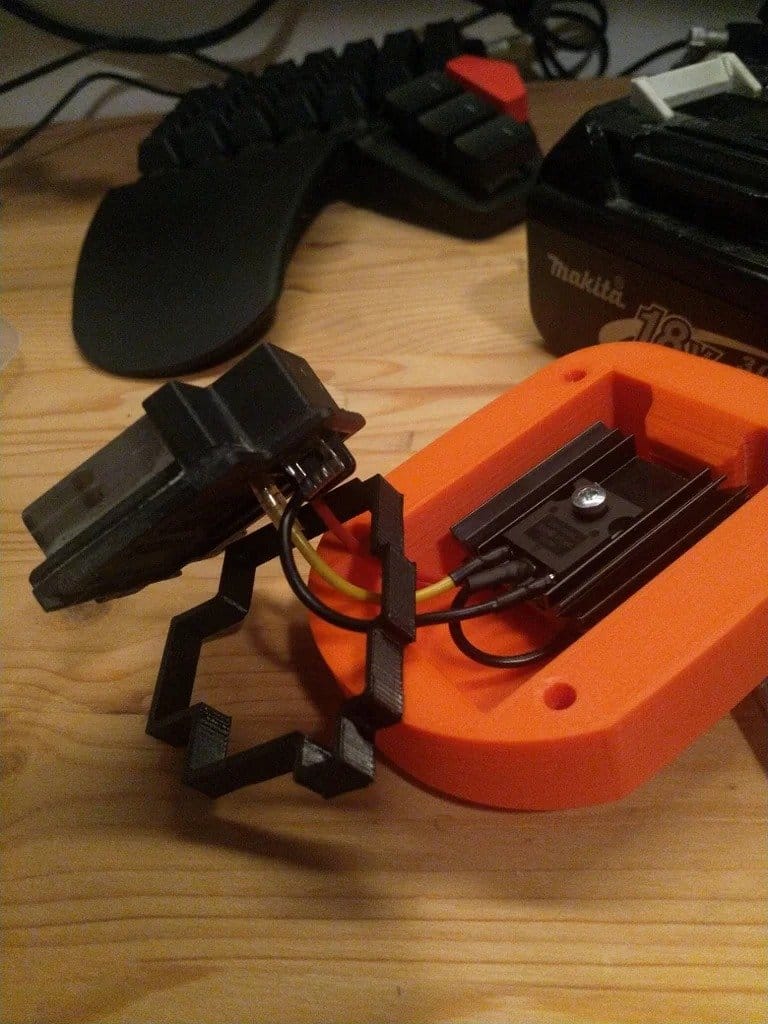 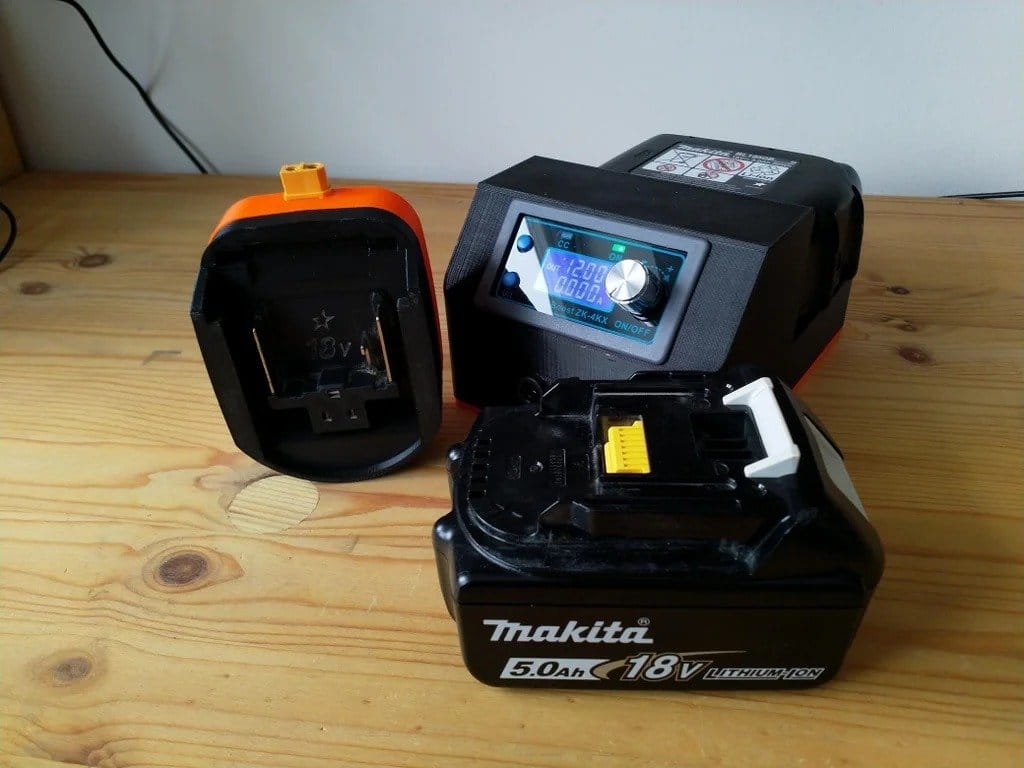 He started off by contacting a local Makita representative and asking if he could get some information on how the overdischarge function works. Unfortunately, however, the answer was no. The only thing he was able to confirm is that the batteries do not really cut off the power by themselves, but only in combination with the tools marked with an asterisk.
On reflection, he realized that he needed to focus on the third pin of the battery connector, as this is the only the difference between old tools and batteries (those without a star and protection, the old ones only have 2 contacts).
Then he examined a broken drill from this company and found out that the drill uses a simple N-channel MOSFET, which allows current to pass as long as there is a high voltage at its source terminal, and turns off the power when it drops. This should mean that the third pin of the battery should have a high voltage until it is discharged, and then it will be 0 V.
To verify this, he connected a multimeter to the batteries and began to take measurements. As soon as the voltage level of the positive terminal reaches 12 V, the voltage on the third terminal drops to 0 V. 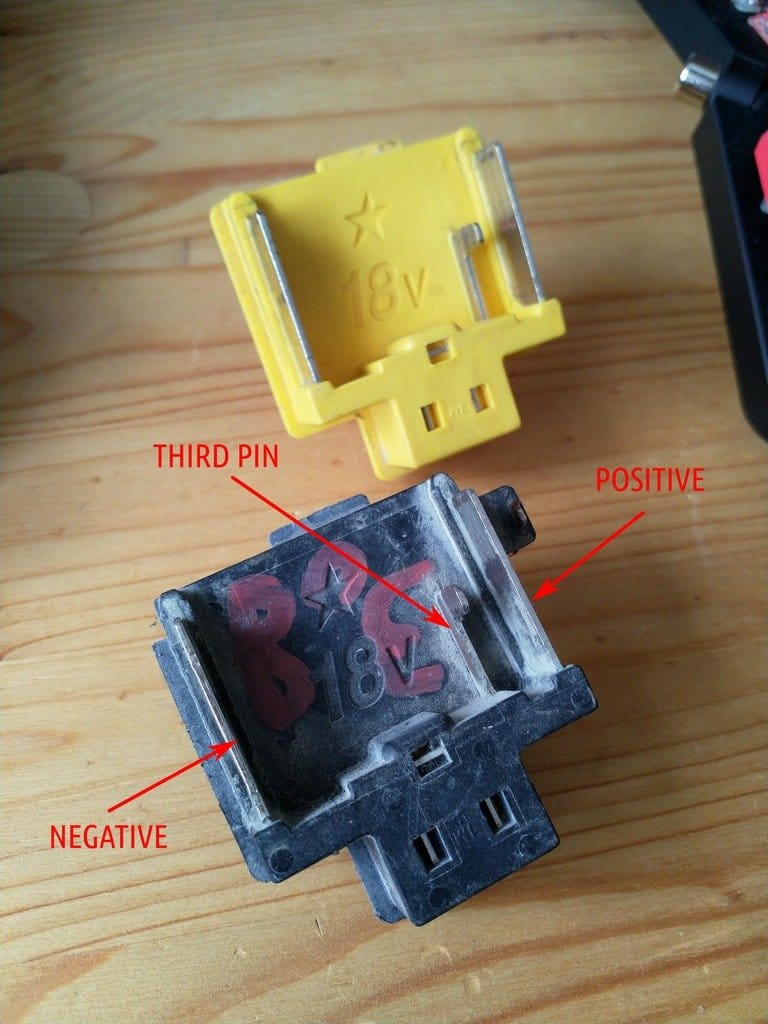 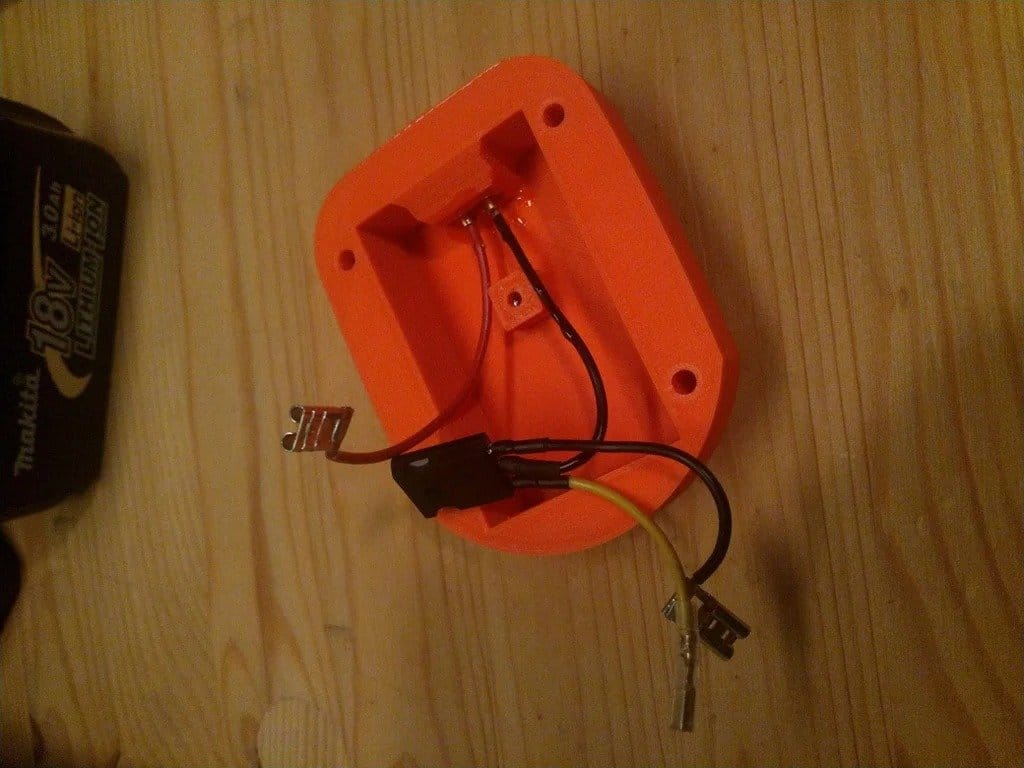 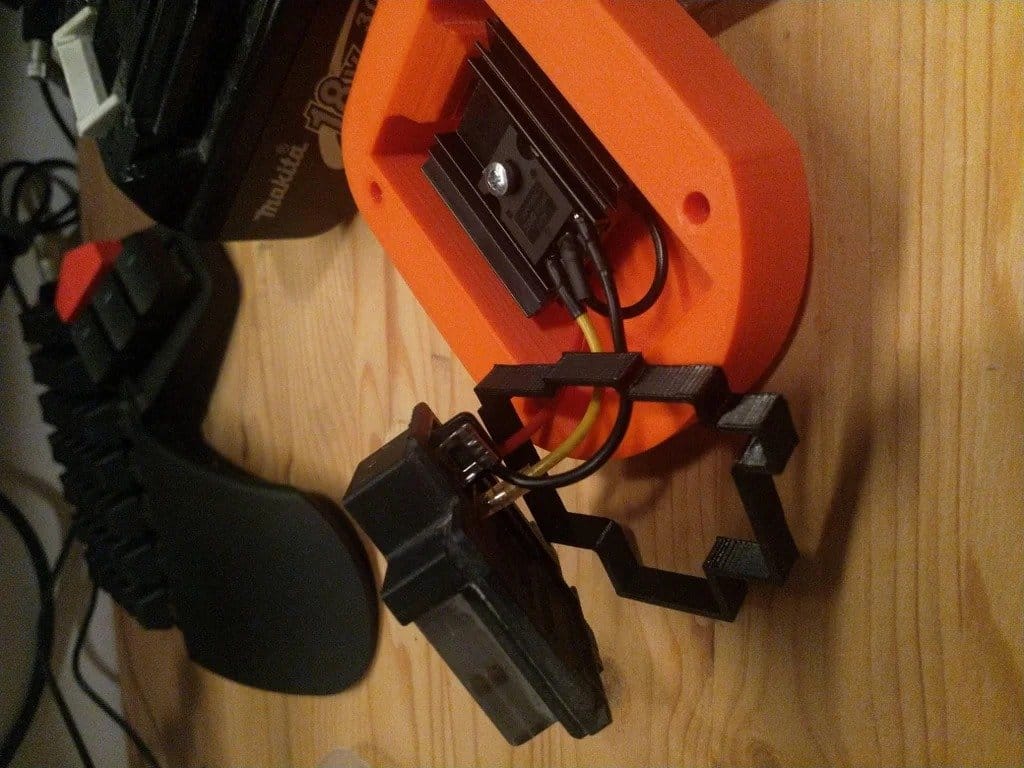 From testing, he was able to determine that the third pin would have a voltage between ~ 19V and & gt; 12V, representing a fully charged and fully discharged battery and of course 0V when the protection is triggered.
So based on The discovery that Makita uses a MOSFET to shut off power after discharge left only one important question to be answered. Should it cut off the positive (high) side or the negative (low) side?
The answer depends on what is being done. If you are powering a lamp that uses Makita batteries, it is best to turn off the minus, simply because it is more efficient, cheaper, and easier. But in this project, more complex electronics are powered, and it is better to use plus for disconnection, since the electronics like to be grounded.
In the end, he developed three circuits for protection against discharge.
He chose different MOSFETs depending on needs and what was at hand. You need to make sure that the transistor is capable of operating in the 12-19 V signaling contact range.
The low side shifting circuit he found in a Makita drill is as simple as it gets. The drill uses an IRFP3006 N MOSFET with a battery signal connected directly to its gate, and its negative pole is connected to the source of the MOSFET, and its drain is connected to the negative part of the load.
This works because, the signal pin the Makita battery is always either 0 V or 12 + V.
The following circuit is similar to switching the Makita, but there are three differences:
The master added a 100 ohm resistor in series between the signal and the gate to protect the MOSFET from potential power surges.
He added a 10k pull-down resistor, although technically it might not be needed as the battery may already have one on the signal pin .
He swapped out the MOSFET for another N-channel MOSFET, IRLB8721, just to demonstrate that a different transistor could be used.
The third circuit cuts off the power on the positive side.
Since the circuit is limited to the positive start signal from the battery, this means that you cannot simply replace the N-channel MOSFET with a P-channel MOSFET.
Instead, you will need to use an N-channel MOSFET (2N7000 ) to start the P-channel MOSFET (IRF5305) by adding 100 ohm resistors (R1 and R2) at the gates, plus a 10k pull-up resistor (R3) and 10k pull-down resistors (R4).
This circuit basically inverts the signal pin so that it can drive the P-channel MOSFET. However, this also means that the circuit always draws a small amount of power, so the battery should be disconnected when not in use. 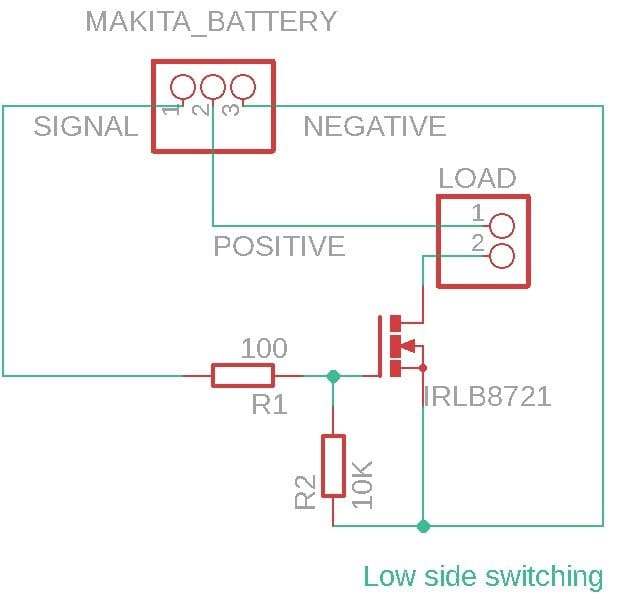 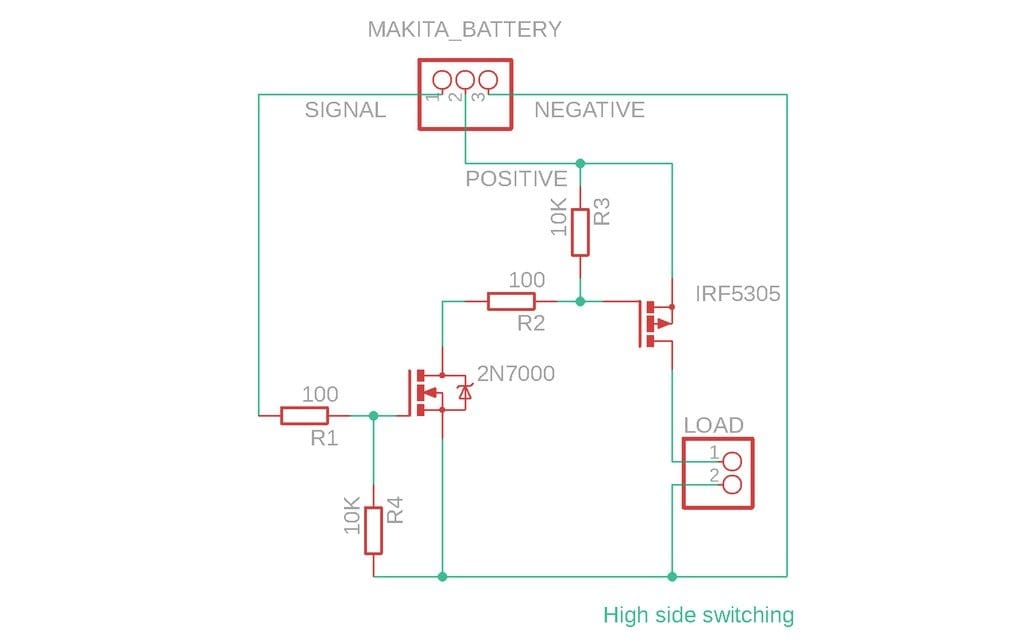 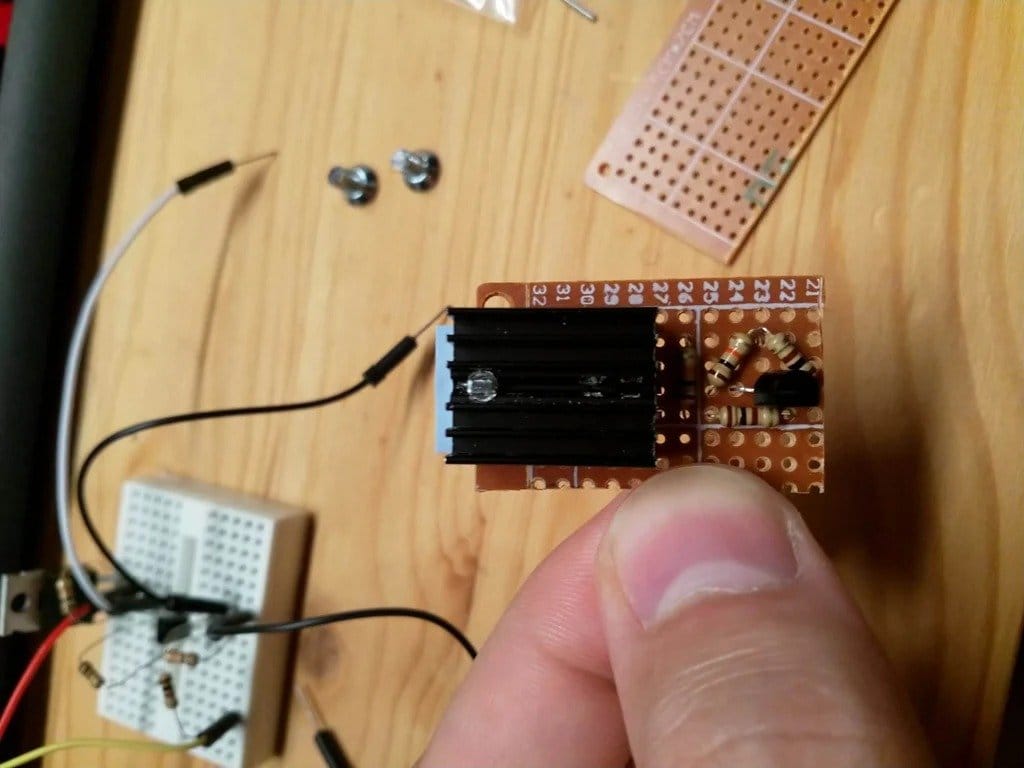 Grinder attachment that turns the grinder into a grinder