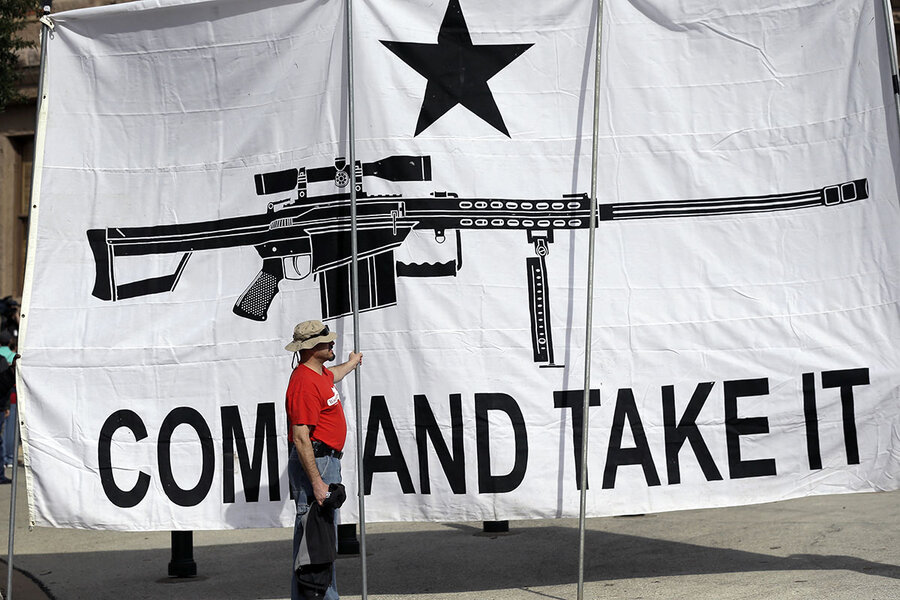 Soon, most adult Texans will be able to openly carry a handgun in public. No background check or training necessary.

It will be a major expansion in gun rights, one that Texas is uncharacteristically late in arriving at. About 20 other states already have “permitless carry” (also known as “constitutional carry”) laws, including Vermont.

Vermont is an outlier, having never regulated gun possession in its history. It’s legal to carry a concealed handgun in all 50 states, though most require a license, training, and a completed background check. In Texas, for open or concealed carry, residents generally need to pass a written exam and a shooting proficiency test, complete four to six hours of training, and submit their fingerprints.

When Texas changes its gun laws, the United States takes notice. But “permitless carry” already has been adopted in 19 other states. What are the effects so far?

The new permitless carry law awaiting Texas Gov. Greg Abbott’s signature would nix that requirement, essentially making permits – and the training and paper trails that come with them – optional. Only those already barred from carrying a gun would be excluded.

It’s one trend in a rapidly changing gun rights landscape. Nineteen of the states with permitless carry adopted the laws in the past decade, due in great part to National Rifle Association lobbying efforts. (Tennessee Gov. Bill Lee thanked the group in a tweet after signing the bill into law.)

“Part of it is simply exploiting the fact you have some very conservative state legislatures that are very receptive to this kind of thing,” says Robert Spitzer, a political science professor at the State University of New York, Cortland, who studies gun politics.

But other states have been moving in the opposite direction. Liberal states like New York and California have passed new gun control laws – often following high-profile mass shootings – that include banning assault weapons and high-capacity magazines, and requiring background checks on all gun sales. President Joe Biden is also supporting various gun control measures.

In that sense, the growth of permitless carry is also “an ideological push in the opposite direction,” says Dr. Spitzer.

“Every law-abiding Montanan should be able to defend themselves and their loved ones,” said Gov. Greg Gianforte when he signed Montana’s permitless carry bill into law in February.

But the laws have also conjured up visions of Wild West-era lawlessness, and provoked fears of increased crime and violence. When Oklahoma adopted its constitutional carry law in 2019, local news reported that not much happened afterward, “at least on its first weekend.”

Law enforcement officials have publicly opposed permitless carry in many states. The Missouri Fraternal Order of Police did, as did all the county sheriffs in West Virginia. The public, including Republicans and gun owners, also often opposes scrapping permits.

In Kansas and Missouri, local law enforcement, government officials, and certified gun trainers told researchers with the Urban Institute in 2018 they mainly disapproved of permitless carry because training would no longer be required.

“Law enforcement was concerned with accidental shootings, or increased firearm thefts if guns are not secured properly,” says Paige Thompson, a researcher at the Urban Institute.

“It’s [also] very difficult for them to determine whether someone is ineligible to carry a firearm without a permit because there’s no [state] background check,” she adds, or “background checks for private sales.“

So who’s right? Does permitless carry increase safety, or violence? Since the laws are only a few years old, researchers say more time is needed to see if they have a notable effect on public safety.

“There hasn’t been much research on permitless carry,” says Andrew Morral, leader of the Gun Policy in America study initiative at the Rand Corp.

In “shall issue” states, applicants generally get permits if they meet the requirements. In “may issue” states, meanwhile, law enforcement has some discretion to deny permits to certain individuals. It’s here, where research has been building for decades, that experts are beginning to draw some conclusions.

John Donohue, a professor at Stanford Law School who has been studying gun policy for decades, says it took about 20 years “before I was able to draw a strong conclusion about the impacts of the laws.”

For permitless carry laws specifically, crime statistics show little significant change – at least that can be attributed to the laws themselves.

“It has been difficult to study [permitless carry law] effects given the short timeline,” says Dr. Spitzer.

And to the counterargument, he adds, “there is no evidence that civilian gun carrying has any beneficial effect on suppressing, stopping, or reducing crime.”

An analysis of several thousand gun policy studies by the Rand Corp. last year found that evidence that concealed carry laws increase homicides and other kinds of violent crime is limited at best, but mostly inconclusive.

The FBI, for example, changed the program it uses to collect local crime data this year. The new program will allow for more detailed reporting, but reporting is voluntary. Dr. Morral and others have concerns that participation will drop off and there will be less data to study.

For now, it’s hard to deliver a conclusive verdict on what effect permitless carry laws have on public safety, if they have an effect at all.

Rand surveyed a range of experts – including academics, advocacy groups, and legislative staff – on how adopting permitless carry nationwide could affect public safety, for example.

In its next term, the U.S. Supreme Court will hear a case concerning a restrictive New York concealed carry law, its first big Second Amendment case in more than a decade. The court has to date ruled only that the Second Amendment protects having a handgun in the home for self-defense. This case could see that protection expanded to handgun possession outside the home.

The gun rights landscape could thus be poised for even greater change. Whichever direction the statistics and research take, politics will continue to play a powerful role.

“Over a considerable period of time, [the evidence] was murky enough that the theoretical arguments against [permissive carry] laws were not powerful enough to stop them,” says Dr. Donohue.