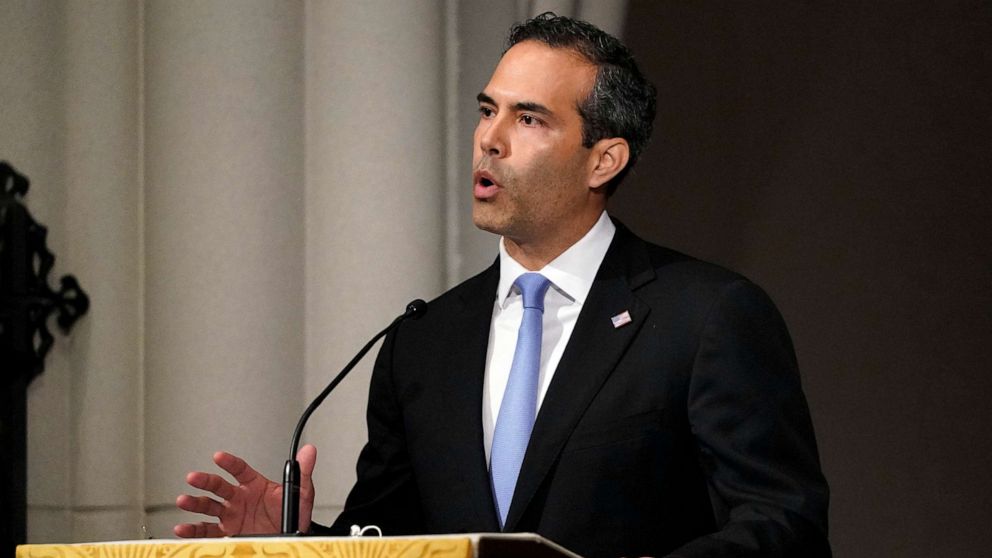 One of the biggest tests of the post-presidential sway of Donald Trump may come courtesy of an ambitious Texas politician named George Bush.

This is no story of revenge for a storied dynasty. When George P. Bush makes his expected announcement of a campaign for state attorney general on Wednesday, he’ll be doing so as an avowed Trump backer — even though he’s joining a primary against an incumbent who is himself one of Trump’s highest-profile elected loyalists.

Bush, the 45-year-old Texas land commissioner, is Latino, a former Navy Reserve officer, the son of Jeb Bush and the nephew and grandson of presidents who share his first and last name.

He has long been seen as the likeliest member of his generation to keep the Bush family legacy in politics. The way he’s choosing to keep his political career going, though, is raising eyebrows in Texas and well beyond.

Bush’s hope is that Attorney General Ken Paxton’s legal woes make his job an available next step on the political ladder — and that his own fealty to Trump will erase memories of the taunts and insults the former president directed at his father and other family members.

Trump has said he likes both men and indicated he will endorse “in the not-so-distant future.”

Will he reward Paxton for loyalty that included a lawsuit against states Trump lost and deliver a final indignity to the Bush clan in the process? Or will he enjoy the message it sends by backing the one prominent Bush who has backed him?

The fact that both candidates want his backing is, of course, a statement in itself — and yet another win for Trump inside the GOP.

A rise in crime in cities across the country has taken center stage and the question of how to proceed as it relates to policing and public safety has shaped two very different political races — New Mexico’s special election to replace Interior Secretary Deb Haaland and the New York City mayoral primary.

The race in Haaland’s former congressional district tested the strength of Democratic support and the effectiveness of the Republican strategy of focusing on crime.

Wednesday night, eight candidates vying to be New York City’s chief executive will have to address a surge in violent crime while balancing calls to reallocate funds into communities and away from the New York City Police Department during the second Democratic primary debate — the first to be held in person — hosted by ABC New York station WABC.

It comes as the city marked a bloody holiday weekend, with shootings in all five boroughs. Overall, shootings are up 77% from the same time last year.

Many of the progressive candidates have highlighted their plans to redirect NYPD funds to community initiatives, while candidates, such as former presidential candidate Andrew Yang and Brooklyn Borough President Eric Adams, have been wary of those methods.

It remains to be seen which stance will prove victorious in that race, the primary election is slated for June 22.

As some Republicans nationwide continue to push conspiracy theories purporting widespread election fraud, Arizona’s audit is serving as an example for other states looking to audit their own elections.

Kauffman and Dush were both plaintiffs on a lawsuit in mid-December which sought to overturn election results in Pennsylvania, claiming mail ballots were handled improperly and that observers were too far away when tabulating was happening.

All three Pennsylvanians signed a letter to Congress to object to the certification of the state’s results. Mastriano was in Washington on Jan. 6 and organized busses to take people to the city that day. New video appears to show him walking through police lines.

Arizona GOP Chairwoman Kelli Ward tweeted out the news of the visit, alongside the hashtag #DominoEffect, feeding conspiracy theories that the results of Arizona’s so-called audit will ignite others in 2020 battlegrounds.

FiveThirtyEight Politics Podcast. The 2022 midterms are still a ways away, but the primaries are already less than a year away in a dozen states, and the field of candidates lining up to compete for a nomination is growing in key races. Handfuls of Democrats are vying to replace retiring Republican senators in Pennsylvania and North Carolina. Likewise, several Republicans are eager to replace retiring Sen. Rob Portman in Ohio and oust Rep. Liz Cheney in Wyoming. In this installment of the FiveThirtyEight Politics podcast, the crew looks at how some of the most competitive primaries are shaping up. https://53eig.ht/3uK6up0

Bandi to take up arrest of journo Raghu with Centre