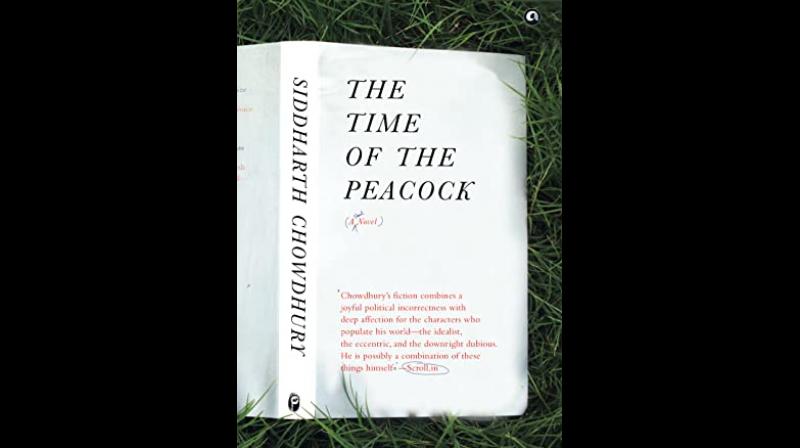 In a unique narrative style that blends the sophistication of the metro cities with the raw sensibilities of a small town, and that mixes slow and silent manifestation of feelings with sudden emotional outbursts, Siddharth Chowdhury, in his latest offering The Time of the Peacock, tells us the sociopolitically insightful stories of contemporary India, the India which has taken a sharp right turn after staying left-of-centre for almost seven decades of its post-Independence existence.

The book is a collection of three interconnected stories — you can call them novellas — and each is told through the point of view of a unique character with a distinctive socio-linguistic background.

Bhasha India, the opener, has a central character called John Nair, a Malayali editor heading the Indian branch of a multinational publishing company. With John, we travel from Delhi to Sidhrawali in Haryana where he has a small farmhouse and during this journey we get to know about John’s backstory. We meet a cast of characters including cow vigilantes gone berserk. Cosmopolitan John Nair who is married to a Kashmiri Muslim girl finds these events disconcerting. He is also worried about his employee and caretaker of his farmhouse, Ramzan, a Muslim, and a Bengali at that. Ramzan has the double risk of being branded a foreigner, read Bangladeshi, and lynched.

The interestingly named narrator of the second story, Wallace Water is Angika Raag ‘Nishad’, a gifted Bihari writer and translator. Her surname indicates that she comes from the marginalised community of traditional boatmen. Though her mother is a high caste Bengali, she has to carry the burden of her father’s surname. While narrating her stories, she not only tells about the caste matrix that exists in Bihar but also introduces us to the changing political landscape of the state during Lalu Prasad’s rule as Mandal politics takes centrestage.

Ritwik Ray, the bard of Patna, who was a character in Chowdhury’s debut story collection Diksha at Saint Martin and the protagonist of his novel, Patna Roughcut, is the central character of the third story titled Freebooter. Ritwik is an eccentric with a long list of idiosyncrasies but sensitive and caring. He is writing a novel called Godse Chowk. The title of Ritwik’s novel is a metaphor for our times. Through Ritwik, we get introduced to a Bihari leftwing activist and writer, Ramanuj Sahi. Coming from the prosperous and dominant Bhumihar caste, Sahi chose the path of the revolution and fought for the downtrodden. He ended up in jail accused of being an “urban Naxal”.

In addition to a thoughtful meditation on the present sociopolitical situation of India, the book also gives us an opportunity to have an insider’s view of the Indian publishing world. As the author is an editor in a leading publishing house, he passes on important, interesting and authentic information about the workings of the publishing industry to his readers. The other fascinating aspect of Chowdhury’s writing is his ability to evoke a sense of place and time. As always, he has created multilayered characters. His prose has the crispness of “silao khaja” and sweetness of “Sasaram’s belgrami”. For the uninitiated, khaja and belgrami are famous Bihari delicacies.

The Time of the Peacock

Prior infection cuts COVID-19 infection risk for up to 10 months: Lancet study