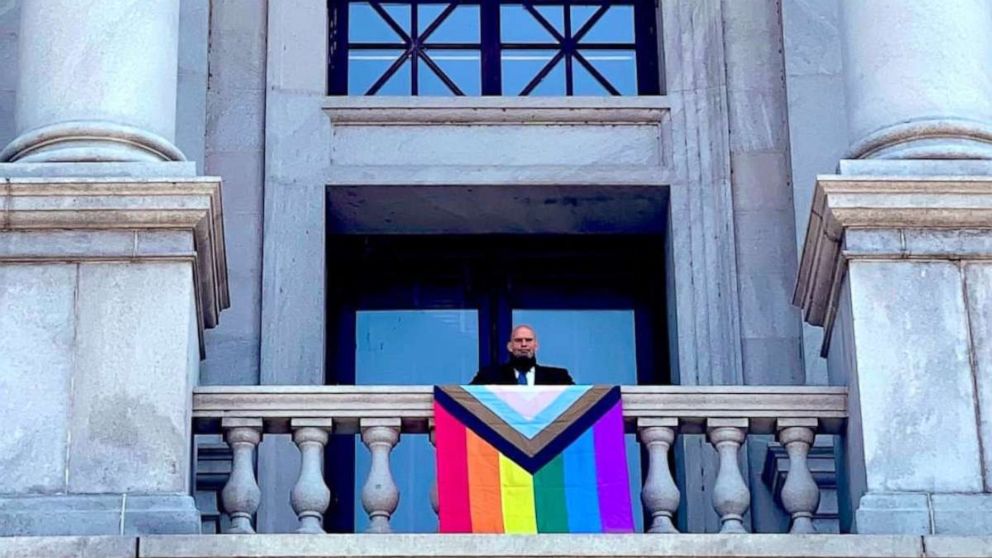 Pennsylvania Lt. Gov. John Fetterman hung an LGBTQ Pride flag on the balcony of his state Capitol office, but it was removed after flying for just a few hours.

State employees took down the flag in cooperation with a provision backed by state Republicans last year that bans flags that aren’t approved by lawmakers from flying at the Capitol.

The provision against flying flags outside the Capitol building was slipped into the state’s fiscal code in 2020, an annual bill passed that includes instructions on state spending. The provision prohibits flying any flag other than the American flag, Pennsylvania’s state flag or a flag honoring missing American soldiers.

Fetterman hung the flag in honor of Pride month, the annual celebration of LGBTQ identities, and said he will continue to fly the flag in protest of Pennsylvania’s lack of protections for this community.

“It’s important to do it until we have equality for gay and trans communities in Pennsylvania of equal protection under the law,” Fetterman told ABC News. “It’s technically breaking the law by flying this Pride flag on my office balcony, but it’s perfectly legal to discriminate or deny service to members of the gay or trans communities in Pennsylvania.”

“The real way to get rid of my flag,” he added, “is to just enshrine those protections in our Constitution.”

Fetterman, who served as an officiant for the first same-sex marriage in Allegheny County when it was still banned in the state in 2013, said he believes Pennsylvania is failing its LGBTQ citizens.

“We had the opportunity to introduce language granting full equality and protections for members of the gay and trans community, and that was voted down unanimously by members of the Republicans in the Legislature,” Fetterman said.

In January, an amendment to a House bill would have solidified protections for LGBTQ people in the state’s Constitution, but it was voted down by Republicans. And in May, House Republicans voted against removing “homosexuality” from the state’s criminal laws.

Pennsylvania also was one of at least 30 states to introduce bills that would ban transgender girls and women from playing on female sports teams.

“I just will never understand why anyone would go out of their way to exclude members of this community and create a second- and third-class citizenry in Pennsylvania,” Fetterman said.

House GOP spokesman Jason Gottesman told ABC News that he denounces Fetterman’s actions and that it’s Gov. Tom Wolf’s and Fetterman’s own administration that is enforcing the flag law.

“Disrespecting the rule of law that was agreed to by the governor — and is currently enforced by his administration, of which lieutenant governor is a part of — does not do anything to further those discussions in a positive manner,” Gottesman said.

On matters of LGBTQ equality and protection enshrined in law, Gottesman said that Fetterman “has the ability, if he wants to, to engage in positive discourse on policy changes.”

“All I’m advocating,” Fetterman said, “is just equal protection under the law for members of our gay and trans communities.”

Texas Republicans are a preview of national GOP rule