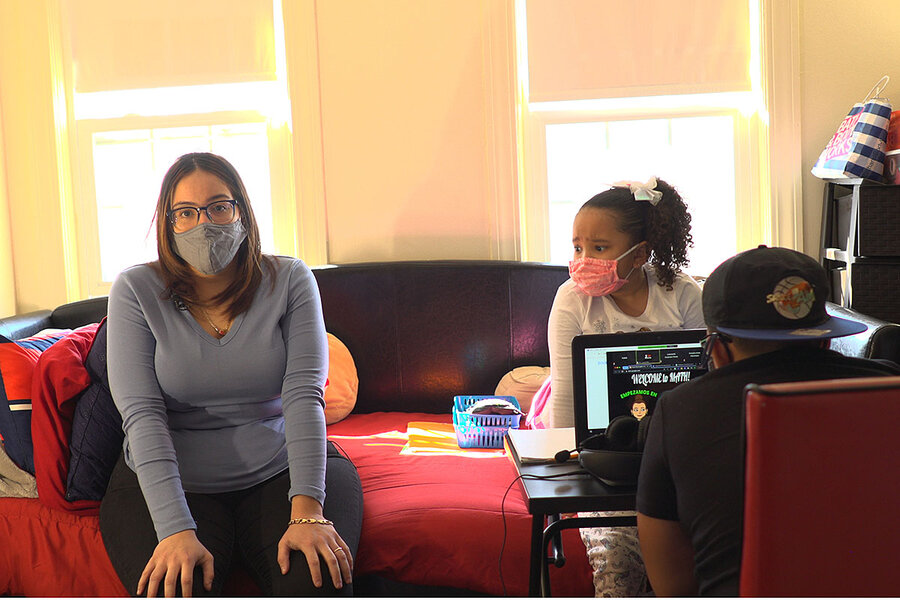 Seven-year-old Cristynn was scared to be left in her bedroom alone. She followed her mother, Taylor López, everywhere in their new apartment. Ms. López had an idea why. Homeless since birth, Cristynn had always stuck by her side as the two bounced from one crowded apartment to the next, huddling on a sofa at night, living by the grace – and the rules – of other families.

“We probably shared space in other people’s homes for so long that she had no idea what to do with her own space, her own toys, her own TV,” says Ms. López, a young mother working delivery gigs to supplement her unemployment benefits.

“I would tell her this is her home, and she gets to do what she wants here.”

Being housed can be far from being at home. In Boston, a new aid effort recognizes the vulnerability of “doubled-up” parents and children – a couch-surfing homeless population traditionally overlooked by subsidized housing programs.

Ms. López and Cristynn moved into their new Boston-area two-bedroom apartment in January, thanks to a major Boston effort to recognize and house a long overlooked homeless population: “doubled-up” families, a homeless group that falls between the cracks of housing services in their last-ditch effort to stay off the street by couch surfing.

Their circumstances outwardly invisible, people sheltering in others’ homes are believed to be a majority of the homeless population in the United States, says Donald Whitehead, executive director of the National Coalition for the Homeless. Couch-surfing families account for three-quarters of the more than 1 million homeless students in U.S. public schools, according to data from the federal Education for Homeless Children and Youths Program. Yet this growing population is traditionally shut out of the housing aid system, which regards them as less vulnerable because, technically, they are housed.

The Boston program, which has housed 300 families over the past year, is part of a growing number of efforts nationwide to reach this underserved population, family advocates say.

“There’s this misconception that [doubling up] is more stable, more secure,” says Barbara Duffield, executive director of SchoolHouse Connection, a national advocacy group for homeless children. “Very often, people who are doubled up have the exact same problems, even more so, than somebody in a shelter, somebody in a motel.”

The Homeless Children and Youth Act, a bipartisan bill recently re-introduced to Congress, expands HUD’s definition of homelessness to include doubling up.

Boston began serving doubled-up families during the early stage of the pandemic in spring 2020, when shelters reduced capacity to stem contagion. The city designated 500 subsidized housing vouchers for doubled-up families with children enrolled in public schools.

Eligible families are identified by each school’s “homeless liaison” and referred to FamilyAid Boston, a homeless service group that helps them secure a voucher and a new home. Families are typically housed in under a year, about half the time it takes for those in shelters to obtain housing, says Larry Seamans, president of FamilyAid Boston.

Minneapolis and Chicago have created similar collaborations between public schools and local housing authorities. Such efforts are “critical and long overdue,” says Ms. Duffield. “It’s a model that should be replicated across the country.”

The voucher was the miracle Milesly Fernandez says she prayed for.

Displaced by an earthquake in Puerto Rico, she and her two children arrived in Quincy, Massachusetts, in February 2020. They moved in with Ms. Fernandez’s brother, who has a family of four, thinking they could get into public housing in a few months.

The waitlists turned out to be 5-10 years long. Then the pandemic derailed Ms. Fernandez’s plan to work and learn English. The three spent most of their time in a small room crammed with furniture, sharing a single sofa bed.

With four kids in the household taking online classes, the internet failed often. Ms. Fernandez says her 7-year-old daughter cried every night, asking when she could have her own room. She never told her children how long the waitlists were, but instead, she says in Spanish, “I told them that at any time, God would perform a miracle. He would bring us a house for the three of us, even if it was little.” The miracle arrived last fall, when her children’s school connected her with FamilyAid Boston, which helped Ms. Fernandez find a three-bedroom subsidized apartment.

But weeks before her move-in date, the housing manager of her brother’s discovered the extra tenants. Ms. Fernandez and her children had to move into a shelter for the last stretch of their wait.

Doubling up is “an untenable lifeboat,” says Mr. Seamans of FamilyAid Boston, because the living arrangement often violates the lease and city sanitary codes, risking eviction for both hosts and guests. Overcrowding also can breed conflict that can jeopardize the guest family’s stay, he says.

Most families that end up in the Massachusetts shelter system were previously doubled up, says Judith Cohen, a housing specialist at FamilyAid Boston.

“One big misconception is that doubled-up families are a different population from families in shelter, families in cars,” says Ms. Duffield. “That’s just where they are on that particular day.”

And, says Claas Ehlers, CEO of Family Promise, a national homeless services group, “Doubling up is not qualitatively better than other homeless situations. It can be in some circumstances, and in others it can be worse.”

Research shows that doubling up harms children’s well-being and academic outcomes much the way other forms of homelessness do.

In her years of homelessness, says Ms. López, the closest feeling of having her own space was actually in a shared two-bedroom shelter apartment, not when she and Cristynn stayed with relatives and acquaintances.

Doubling up, says Ms. Lopez, is like “you don’t really have a voice, because it’s not your own home.”

Sleeping in others’ living rooms meant the two could not have their own schedule or space. They could only go to bed after everyone else. And as soon as the others got up, they had to clear out the sofa they slept on. Quality sleep was rare: Ms. López often had to sit up, so Cristynn could “really lie down.” Cristynn rarely had quiet time to do homework, and her grades suffered.

Then there were the times when two families clashed on how to discipline the kids, and the kids protested: “Why am I treated differently?” Ms. López sometimes had to take Cristynn outside to “lower the tension.”

Couch surfing can be traumatic

Ms. Duffield says the uncertainty in doubling up is “a traumatic stress” in itself: “You don’t know when someone’s going to tell you to leave. You can’t protect your kids from what else is going on in that environment.”

But still, in early 2020, Ms. López and Cristynn had to leave a friend’s place, because a third desperate family moved in, making it 10 people in a three-bedroom apartment. So the two bounced between two apartments amid the pandemic, staying a few days at a time at each place so as not to overwhelm their hosts. Cristynn missed many school days. And, Ms. López says she was physically attacked once at one of the apartments.

Boston’s 500 vouchers is “a drop in the bucket,” says Mr. Seamans. The city’s public schools identified 2,000 couch-surfing students in the 2019-20 school year, and family homelessness is poised to spike once pandemic safety net programs phase out.

But, he adds, “We’re hopeful that as new vouchers come online through [the Biden administration’s] American Rescue Plan, the city and the housing authority will continue to look at this population.”

Today, Cristynn is no longer scared of her room. “Now she feels at home, and she wants to be home,” says her mom, who is also getting used to the space that allowed her to cook her first big family meal, ever, at Easter.

Amid a mental health battle, sponsors side with Naomi Osaka