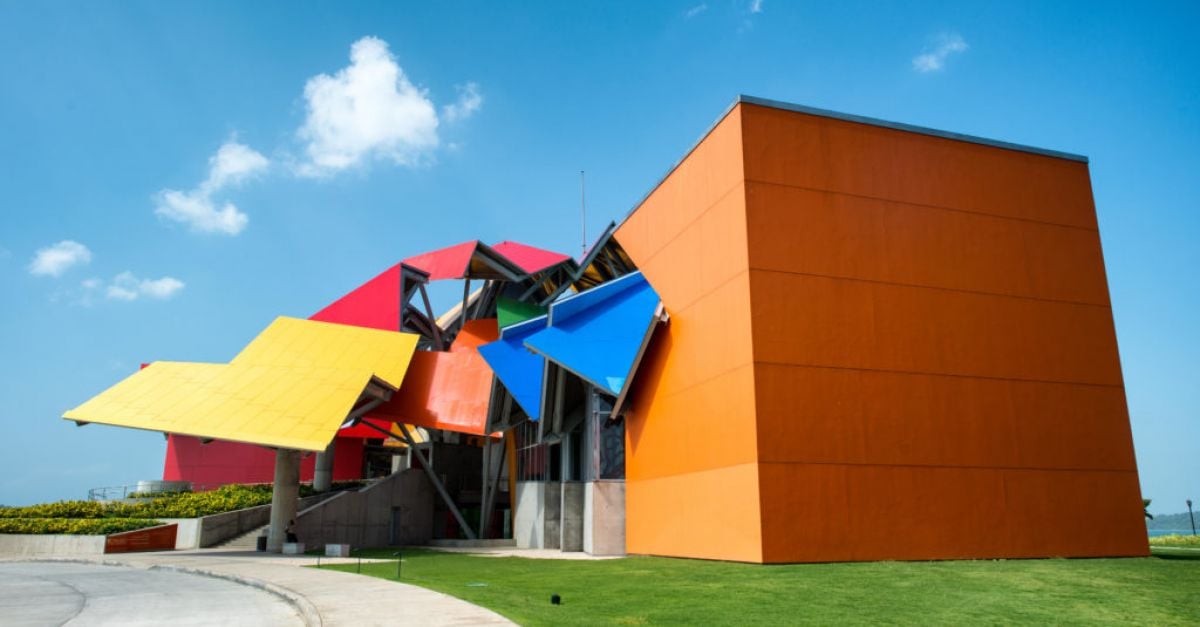 Bright colours are not always popular with architects.

From modern glass skyscrapers, to solid stone medieval fortresses, to the brown-grey tower blocks of the 1960s and 1970s, vivid colour schemes have frequently been considered too visually arresting for the constructions that make up our day to day.

But when primary colours do get to shine, they tend to really stand out. These are among the world’s brightest buildings, from museums and mosques to an island off the Neapolitan coast…

Painted with blocks of bright, vivid colour, rather than patterns or lines, Pena Palace opts for visual impact over complexity, shining like a beacon above the Portuguese city of Sintra. With bright yellow sides, blue battlements and foundations, brick-red ramparts and towers, and rich purple gatehouse, the palace is a bizarre blend of architectural styles ranging from Moorish to Gothic.

Easily seen from Lisbon on a clear day, the palace is a UNESCO World Heritage Site, and has been used by the Portuguese president for state occasions.

A small-ish facade with faded paintwork is perfectly pretty, but it’s the inside of the Nasir al-Mulk Mosque that wins it most of its plaudits. Rays of stained glass windows line the main prayer hall, splashing rainbows of light across floor and walls, that form different colours and patterns as the day goes on. The building is nicknamed ‘The Pink Mosque’, but we think a more kaleidoscopic epithet would be equally appropriate.

Legendary American architect Frank Gehry could monopolise this list all on his own, but we’re limiting him to his Panamanian project the Biomuseo, the first and only Latin American design from the mind behind the Guggenheim in Bilbao.

A museum of natural history on the shores of Panama City, the design is signature Gehry: vibrantly-coloured interlocking canopies topping an angular interior, that twists and turns through eight distinct galleries.

None of the buildings on the Procida Island waterfront would be particularly special on their own, but together they make up a pastel patchwork that would put Elmer the Elephant to shame. It’s not the only Italian town to span the spectrum (Cinque Terra and Positano spring to mind), but it is surely among the most photogenic, as the buildings tumble down the cliffs to the shoreline, rimmed by the blue of the sea and the blue of the sky.

Legend has it that aptly-named Russian tsar Ivan the Terrible had the architects of St Basil’s Cathedral blinded, so that they might never build something so beautiful for anybody else. We sincerely hope the story is apocryphal, but there’s no denying the spell-binding beauty of St Basil’s, the onion-domed centrepiece of Moscow’s Red Square.

Colourful constructions were all the rage in Russia during the early-modern period, and St Basil’s dazzles with sheets of red, white and gold tin, and well-preserved green and blue ceramic.

Antoni Gaudi is almost synonymous with Barcelona, and although his best-known creation remains the magnificent, technically-still-not-completed Sagrada Familia, the Casa Batllo is probably his most visually vibrant.

With a reflective, purply-blue roof that sparkles in the Catalonian sun, and walls spattered with what looks suspiciously like glitter, you have to squint to look at downtown house-turned-museum even in a relatively dull day.