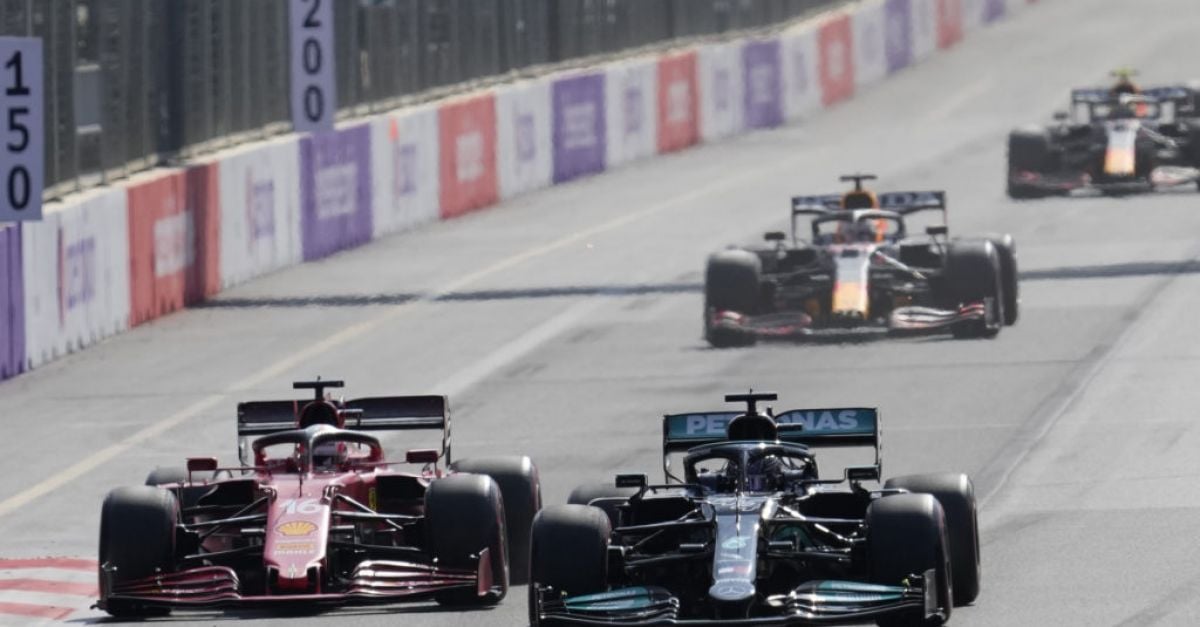 In a two-lap sprint race following Verstappen’s terrifying crash, Hamilton accidentally pressed the wrong switch on his Mercedes steering wheel, causing him to run off the road and drop from second to finish 15th.

In the chaos, Sergio Perez won for Red Bull, with Aston Martin’s Sebastian Vettel rolling back the years to finish as runner-up. AlphaTauri’s Pierre Gasly completed the most unlikely of podiums on an extraordinary afternoon in Baku.

Verstappen drove superbly and was primed to extend his championship lead over Hamilton before his left-rear tyre exploded on the fastest stretch of the Formula One calendar.

The devastating failure left Verstappen as a helpless passenger as his Red Bull darted right into the concrete wall on the start-finish straight with just five laps remaining.

Earlier, the grid had observed a one-minute silence in memory of former FIA president Max Mosley, who died last month, and it was Mosley’s drive to improve the safety of the sport, following Ayrton Senna’s death in 1994, which allowed Verstappen to walk away without a scratch.

Questions were immediately asked of F1’s sole tyre supplier, Pirelli, after Lance Stroll also crashed out with a left-rear puncture at an almost identical spot to Verstappen 15 laps previously. He, too, emerged safely from his Aston Martin wreck.

Pirelli have launched a full investigation, with the savaged tyres shipped from Azerbaijan to Milan by plane for immediate analysis.

The Italian manufacturer says an early probe indicates the failures were caused by external factors, such as debris or kerbs, rather than a fundamental problem with their rubber.

Pirelli boss Mario Isola revealed on Sunday night that Hamilton also suffered a deep cut to his left-rear tyre, and was perhaps fortunate to escape a high-speed blowout, too.

The grand prix was suspended for 30 minutes while the remaining drivers took on fresh rubber ahead of what effectively became a seven and a half mile dash for glory.

Hamilton, second at the restart, told his team to remember that the championship is a “marathon, not a sprint”, apparently content to take the 18 points awarded for second.

But as he raced away from his marks and made a move on Perez for the lead, he inadvertently flipped on the so-called “magic” button on the back of his steering wheel.

The setting helps Hamilton increase tyre temperature for the restart by altering the brake balance, but it left him with virtually no brakes for the left-handed opening bend. He went straight on at the first corner in a plume of tyre smoke.

“I am so sorry, guys,” said a disconsolate Hamilton on the radio.

💔on my own race… But happy for the team and a huge congrats to @SChecoPerez on the win 💪 The car, pit stops and strategy were amazing again, thanks to @redbullracing. Not much more to say at this time other than we’ll keep pushing until the end ⚔️ 🇦🇿 #AzerbaijanGP pic.twitter.com/Cwxp76LVZO

Later Hamilton, who remains four points behind Verstappen in his bid for a record eighth title, added: “I put everything on the line and fought as hard as I could today.

“At the restart, when Perez moved towards me, I clipped a switch which basically switches the brakes off.

“I had no idea I had even touched it. It is very hard to take and I am sorry to the men and the women in the team who have worked so hard for the points.

“But today was a good stroke of bad luck [following Verstappen’s crash]. We will try and come back stronger.”

Hamilton’s Mercedes boss, Toto Wolff, said: “Both Lewis and I are destroyed. For him to be so close and then it is all gone, and then for me, running the team, too.

“It was a perfect start and a perfect move. It is just the brakes were not there.

Sergio Perez is up to P3, and some guy called Sebastian Vettel is a new entry at P9! 🙌😃#AzerbaijanGP 🇦🇿 #F1 pic.twitter.com/uU48zVqQ18

“It feels painful because we had our hands on the trophy after Max didn’t score. The emotion and the frustration is so overwhelming.”

Verstappen revealed he was in the medical centre when he discovered Hamilton’s ill-fate.

“I was laying on the bed and they were taking my blood pressure and suddenly my phone was vibrating and I was like, ‘what is going on?’ because I could hear the cars,” he said.

“I was allowed to leave, so I looked at my phone, and I saw that Lewis had had a problem.”

On a day to forget for Mercedes, who were desperately out of sorts all weekend on the Caspian Sea, Valtteri Bottas started 10th and finished a dismal 12th.