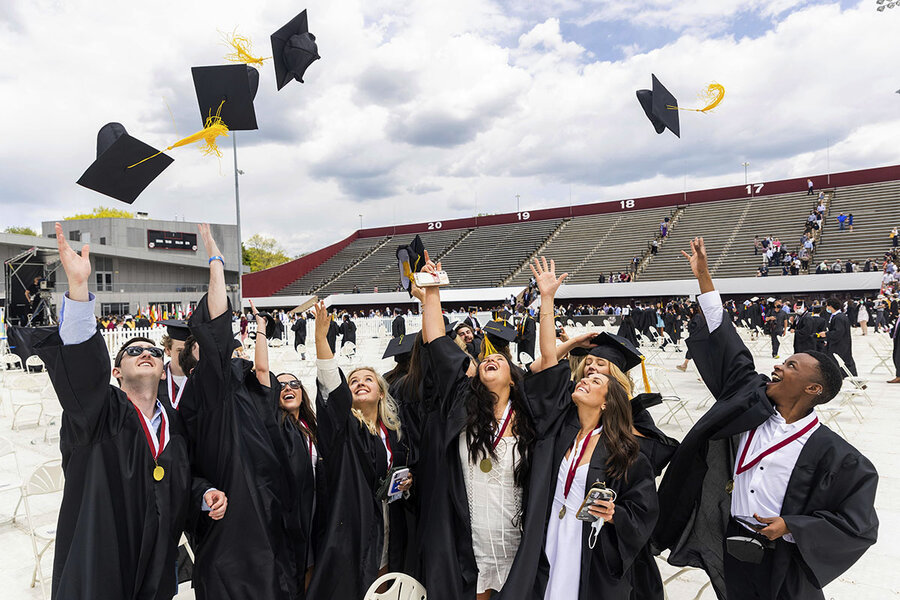 Among a sea of students spaced out across a stadium, Toshiki Aburaki rose from the bleachers for a moment of applause. The University of Maryland Class of 2021 graduate – black robe, red stole – didn’t get the victory lap across a stage he’d hoped for. And yet, honored along with fellow business majors, he felt “super relieved.”

The May socially distanced ceremony capped an end to his pursuit of a bachelor’s degree. Virtual senior year – done remotely with family in Tokyo last fall and back at College Park, Maryland, this spring – robbed him of hangouts with friends and afternoon work in the baseball dugout coaching middle schoolers.

Yet the stakes of senior year meant more than academics: The dual Japanese U.S. citizen was competing for a career, napping during the day in Tokyo and rousing himself for remote job interviews well past midnight. After what he estimates were about a dozen rejections, Mr. Aburaki landed a full-time gig as an analyst for Deloitte. It begins remotely in July, but he’s moving to New York City with the prospect of working – someday – in an actual office.

As the pandemic recedes in the U.S., newly minted college graduates inherit a labor market on the mend. It’s a brighter start than what their peers stepped into last year.

“I’m very, very optimistic about this, about our futures,” says Mr. Aburaki.

His optimism reflects an improving job market that notched modest gains last month. Though it’s still short of pre-pandemic levels, employers added 559,000 jobs in May – around double the jobs added in April. The prospects for recent degree-earners appear better than anticipated, especially since the pandemic has spared college graduates more than those without degrees.

“I’d definitely say it’s better than expected from a year ago,” says Nicole Smith, chief economist at the Georgetown University Center on Education and the Workforce, adding that widespread vaccination, new job opportunities, and the ability to return to offices have helped.

While 2020 grads faced a year of loss, Dr. Smith says they now have an “opportunity” to take advantage of the strengthening job market.

Before life under lockdown, the class of 2020 appeared poised to inherit an era of economic growth. The end of 2019 saw the lowest jobless rate (3.5%) in half a century.

Enter the pandemic pummel. The recession devoured millions of jobs in a matter of weeks, a downturn that’s proved particularly tough on young workers. The overall unemployment rate in April 2020 hit 14.8% while the rate for 20- to 24-year-olds ballooned to 25.6% – not even counting a large number of recent degree-earners who dropped out of the labor market entirely for months after graduation.

Employment prospects for 20- to 24-year-olds have improved, along with the overall unemployment rate of 5.8% in May. While that’s progress from April 2020, unemployment still hasn’t fallen to pre-pandemic rates.

Not all college graduates are in their early 20s, of course. But Jesse Rothstein, former Labor Department chief economist, says he thinks the youngest current degree-earners will have a harder time breaking into the job market “partly because they’re less likely to have existing labor-market connections.”

Research by Dr. Rothstein shows that college graduates who joined the job market during the Great Recession of 2007-2009 earned lower wages and experienced lower employment levels than cohorts from prior years. But comparisons to the present are limited, he says, given how the most recent recession has behaved.

For one, the current economic downtown appears to be shorter term. And while the Great Recession saw job losses at the highest and lowest skill levels, “in this recession, there were just a lot fewer losses for college grads than you would have expected, given the severity,” says Dr. Rothstein, professor of public policy and economics at University of California, Berkeley.

Career services this spring have reported brighter prospects for the class of 2021, in part because companies have adapted to remote recruiting and employment.

Employers planned to hire 7.2% more new college graduates from the class of 2021 than they hired from the previous class, according to a National Association of Colleges and Employers survey from February and March. Though it remains below a pre-pandemic hiring level, the rebound is a sharp increase from a fall 2020 forecast.

The top three industries hiring the most class of 2021 grads are finance, tech, and education, according to Handshake. A LinkedIn analysis of job postings found that software engineering specialist is the most in-demand entry-level job.

“Although the 2020 graduating class struggled for a few months last summer, we saw the hiring rate for fresh college grads return to pre-covid hiring levels by October of 2020,” LinkedIn said in a statement, adding it’s “cautiously optimistic” for the latest class.

Still, many recent grads faced rescinded or delayed offers, and struggled to jump-start careers headed into the fall. For some, pandemic uncertainty made it difficult to plan ahead.

Flexibility to accept a career detour

Arcadia University Class of 2020 grad Heidi Specht saw the dominos fall one by one. Last spring, her summer language institute in Portuguese was suspended, and a research trip to Costa Rica canceled. Her Fulbright to work as an English teacher in Brazil was also delayed.

“It was just kind of like watching everything fall apart,” says the international studies and Spanish major. “I did have a lot of anxiety.”

The uncertainty stalled her search for work. Not knowing whether or when her Fulbright would start, she wrestled with what she’d say in job interviews.

Out of convenience, she says she decided to continue nannying, a gig started during college. Though she loves playing on the playground with two young girls, it wasn’t the career start she planned. But she’s made peace, she says, as the pandemic forced her to think flexibly. Originally drawn to a career in diplomacy or nonprofits, she’s now considering education after a year nannying full time.

“I just have a sense that, you know, it’s OK to take time off. And it felt kind of hard to reckon with myself at first,” says Ms. Specht, whose Fulbright is currently slated for 2022.

“It’s OK that things aren’t going exactly the way I planned, because I’ll get there eventually.”

It’s possible newly minted grads are competing with those who graduated last year. But both groups upped their employability simply due to their diplomas: Even during the pandemic, workers ages 25 and older with higher levels of education experienced lower unemployment rates.

“[The recession has] pointed out that a postsecondary education is much more likely to be associated with your ability to social distance, and work from home, and do Zoom calls,” says Dr. Smith.

“As a whole class … I think their career awareness was probably the highest I’ve seen in four or five years,” he says.

And the 2021 cohort is the first to prioritize work setups as part of their decision-making – whether fully remote, in person, or hybrid, says Cheryl Rotyliano, interim director of career services at Ithaca College.

They’ve witnessed how common it is to struggle at home with responsibilities beyond work, she says: “I think more than ever they’re valuing balance.”