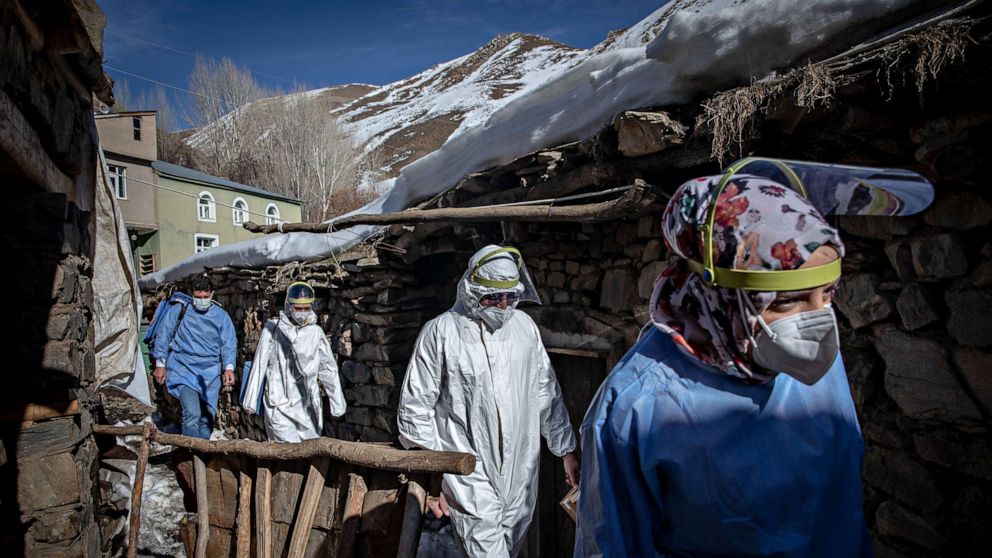 Vaccinating the world against COVID-19, which has killed more than 3.7 million people to date, is a monumental and complex task — arguably, the biggest inoculation effort undertaken in history.

In addition to developing safe and effective vaccines in record time, the logistics of rolling out those doses have been immense and raised questions about access and equity, specifically for poorer countries around the world and at-risk populations in the U.S. and elsewhere.

And experts say vaccinating the world is a matter of necessity, specifically vulnerable populations — a key to reducing the burden on health systems and stemming the tide of contagious variants.

The contrasts between haves and have-nots couldn’t be starker — while more than half the adults in the U.S. are fully inoculated much of the world lags behind. And as the U.S. struggles with unused doses of vaccines and hesitancy, some countries, such as India, Nepal, South Africa and those in South America are facing staggering outbreaks and losses.

The fact that 38.5% of all vaccine doses have gone to just 16% of the world’s population, as of June 1, helps illustrate the disparity, according to an ABC News’ analysis.

Here’s a look at how the process has unfolded and the task ahead:

Both large and small countries can point to successes and failures in the global vaccination effort against COVID-19.

The European Union stumbled badly in its vaccine rollout. And Canada, for instance, has less than 6% of its population fully vaccinated — a far cry from its neighbor to the south, according to Our World in Data .

On the other hand, there are a number of smaller countries that have done well, including Israel with 59.3% of its population fully vaccinated, Cayman Islands with 59%, and Bermuda with 53.8%, the data shows.

Gibraltar has succeeded in vaccinating the vast majority of its population and then some, including several thousand cross-border workers from Spain, resulting in a 114.6 % vaccination rate.

However, many countries are below the global average of just under 6% of their populations vaccinated, including India, which has been struggling with a staggering wave of infections in recent weeks, according to Johns Hopkins University

Experts say there are a number of reasons for these disparities. An inequality of vaccine distribution and access internationally as well as within countries, account for some. Then there are logistical issues, including infrastructure, vaccine hesitancy, governments not prioritizing vaccine distribution, supply shortages, and slow regulatory processes that hamper the world’s ability to get COVID-19 under control.

World Health Organization director General Tedros Adhanom Ghebreyesus has criticized “vaccine nationalism” for playing a role in the inequitable distribution of COVID-19 around the world, Reuters reported. He accused wealthier countries of focusing on their own access to vaccines — pursuing direct deals with pharmaceutical companies and securing doses for their own people, at the expense of other nations.

Dr. Amesh Adalja, senior scholar at Johns Hopkins Center for Health Security, said it’s to be expected that countries prioritize vaccinating their own people. “We knew there was going to be a different timescale for vaccine distribution throughout the world,” he said. The U.S. was particularly pro-active with funding towards vaccine development, through Operation Warp Speed, and pre-purchase agreements.

“Some of the other interference that occurred with export and import restrictions, made it worse,” Adalja said.

The European Union cracked down on exporting vaccines to non-EU countries, including the U.K., until delivery agreements were met for its members, including import restrictions for countries including India, which mandated vaccine ingredients be manufactured locally, Reuters reported.

But the reality is that some countries have their own vaccine manufacturing capacities while others don’t. Some governments have exacerbated the problem with protectionist stances.

“There is no diplomatic way to say it: a small group of countries that make and buy the majority of the world’s vaccines control the fate of the rest of the world,” Tedros said in an opening speech at the organization’s annual World Health Assembly on May 24.

The need to vaccinate globally

Countries are also grappling with vaccine hesitancy, slow regulatory processes in some, supply shortages, leadership failures, and a lack of urgency regarding vaccinations in places, including Japan and Australia, where mitigation measures were more successful, at least initially.

There is a danger to a slow vaccine rollout. The global population and economy continue to be at risk as the virus mutates, creating more transmissible forms. This reality is playing out in countries such as India and Brazil which are suffering from surges with high death tolls and health care systems on the verge of collapse.

Developed countries that are deploying the vaccine more effectively should be concerned with what’s happening around the world not only for humanitarian reasons, but also out of self-interest, is the opinion of some experts including Dr. William Schaffner, a professor of preventive medicine and infectious diseases at Vanderbilt University Medical Center.

Otherwise, “you could have a new variant spring up that could evade the protection of our current vaccines the longer the pandemic continues,” Schaffner said.

The only way to make COVID-19 a manageable respiratory disease that does not require hospitalization is to vaccinate as many people as possible, particularly high-risk populations, according to Adalja.

What can be done

Efforts on a country, state and local level to reach as many people as possible have included mass vaccination sites at stadiums, museums and other public venues. Health workers are traveling by boat, helicopter, and going door to door — using any means necessary to reach outlying communities and vulnerable people in their homes, places of worship and even barber shops. The latest effort in the U.S. has included multi-million dollar lotteries and offering college scholarships. The larger question of more equitable distribution globally remains a troubling challenge.

Though the Biden administration has stated its support for waiving intellectual property protections for vaccines, the EU and U.K. continue to oppose the idea. Pharmaceutical companies are not onboard either and there’s debate about how much a waiver would help widen distribution of vaccines.

COVAX, a multibillion-dollar WHO-backed program, was created to help lower-income countries obtain vaccines and provide equity in distribution. The aim is to prioritize vaccinations of front-line health care workers and pool a supply of vaccines. It’s a recognition of the need for an international mechanism to get vaccines to the developing world and deal with the current pandemic and future health crises, Dr. Adalja said. The main supplier was India, but as the country struggles with more than 337,000 confirmed deaths and vaccinating its own population deliveries of vaccines have been suspended by the Serum Institute of India.

There are efforts now to ramp up global distribution to poorer nations as countries such as the U.S. get the pandemic more under control.

In May, the virtual Gavi COVAX Advance Market Commitment Summit, hosted by Japan and global vaccine alliance Gavi, secured nearly $2.4 billion in funding commitments from governments and the private sector. Japan pledged $800 million to COVAX along with other commitments from countries such as Australia, Norway and Switzerland. The Gates Foundation also pledged funds.

The Biden administration has committed to distributing 80 million vaccine doses globally by the end of June. On June 3, President Joe Biden announced plans for the first 25 million doses to be donated with 75%, or nearly 19 million of that, to be shared through COVAX and the remaining 6 million to go to countries experiencing surges. The U.S. also committed to donating $4 billion to COVAX in February.

The commitments are substantial, but WHO senior adviser Bruce Aylward warned, on June 4, of an estimated global gap of 200 million doses created by India suspending vaccine exports due to their current crisis. “We are setting up for failure if we don’t get early doses,” said Aylward.