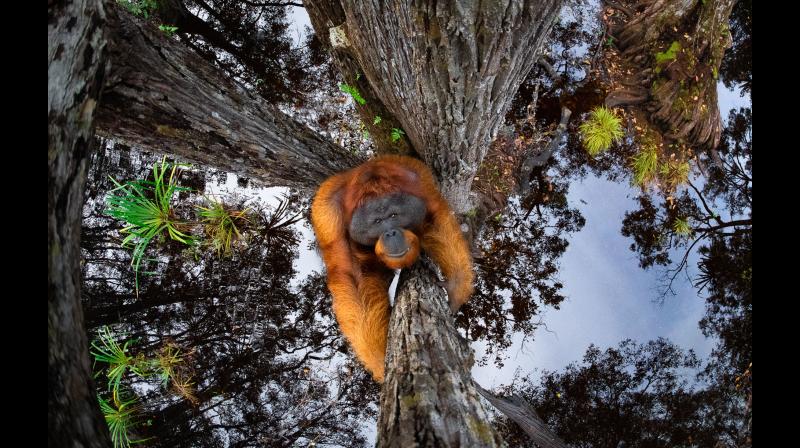 Celebrating nature in its purest form and using well-thought-out photographs to raise awareness about various causes is what drives Indian-origin Canadian photographer Thomas Vijayan, whose stunning photo of an orangutan clinging to a tree took home the grand prize of £1,500 and the title of Nature TTL Photographer of the Year 2021.

The Nature TTL Photographer of the Year Awards celebrate the natural world’s splendour and the best in nature photography. More than 8,000 images by photographers from around the world were entered to compete in eight categories – Animal Behaviour, Camera Traps, Landscapes, Small World, The Night Sky, Underwater, Urban Wildlife and Wild Portraits. Thomas Vijayan’s title-winning entry was captioned ‘The World is Going Upside Down.’ It showed a Borneo orangutan seemingly climbing a tree but, on closer inspection, turns out to be a reflection in the water below the tree.

Thomas says, “I have received en number of awards, but out of those, some are very special to me, like this one, because I was able to deliver a message to the world about the alarming rate at which the world’s biggest ape is losing its habitat, and that trees thousands of years old are being cut down without a second thought.”

Shooting such mind-bending photos takes a lot of time and work. “Some special frames take days of planning, some months and some even years. For this particular one, I planned for months, took two trips to the spot and waited for the rainy season so that there was enough water below this tree to get the reflection as you can see it in the frame,” reveals Thomas. “There are no doubt challenges, but my passion keeps me going and motivates me to achieve my target frames,” he adds.

Elaborating on the award-winning photograph, Thomas says, “This particular orangutan frame was a challenging one. We began our journey with a three-hour boat ride across the sea, battling waves that get as high as 5 feet, in small fibre boat that can barely fit two people. We entered the mouth of a small river that opens only between high tide and low tide – this made it impossible for us to leave the location as the tide ebbed, and the sea became too rough for our boat to negotiate. As we got closer to the location of the photograph, the jungle became so thick that we couldn’t travel by boat any longer, and were forced to continue on foot in waist-deep, crocodile-infested waters, with our cameras held high above our heads. Finally, I made it to the huge old tree I had identified. I climbed it, and waited for a very long time for a nearby orangutan to climb up in just the way I captured in the photograph. Though the journey was tough, it was even tougher to stay calm while the orangutan was before me.”

Thomas’s love for wildlife photography can be traced back to his childhood. “My love for nature is immense and it started from my childhood. When we are close to nature, we start loving it and we start to understand it more and more. When we understand it, we cannot destroy it any more. This is the feeling I want my audience to experience. Nature is a treasure-house which, once destroyed, we cannot replace,” he says. “I have travelled to all the seven continents, from the Arctic Circle to Antarctica, from East to West. Each part of the world is beautiful, unique and the habitat of different species that can survive in that particular climate. Hence the whole Earth is the home of wildlife. It is we human beings who are destroying it and making it difficult for them to survive. They disappear and are now seen only in some unexplored locations,” he adds.

Thomas’ parents are originally from Kottayam, Kerala. They relocated to Bangalore before he was born. But he visits Kerala a few times a year. The last one-and-a-half years have been difficult and different for Thomas, as for everyone else. “I couldn’t travel much, but still I manage to continue with my projects. I did spend a couple of months in Africa amidst this pandemic. What I liked about that trip was that I didn’t have to wear a mask,” he says.

Talking about his passion, Thomas says, “My dream is to shoot frames in such a way that they stand out and can be a sure means of identifying me as the photographer even when my watermark is not on the picture.”

Asked what advice he could give budding photographers, he says, “Do the harder shoots that need hiking, climbing, diving and such things when you are still young. Easy Jeep safaris can be done at any point of life. And always go after quality rather than quantity. Take part in competitions, it will improve your shooting style and will also give you a chance to see many other good frames.”