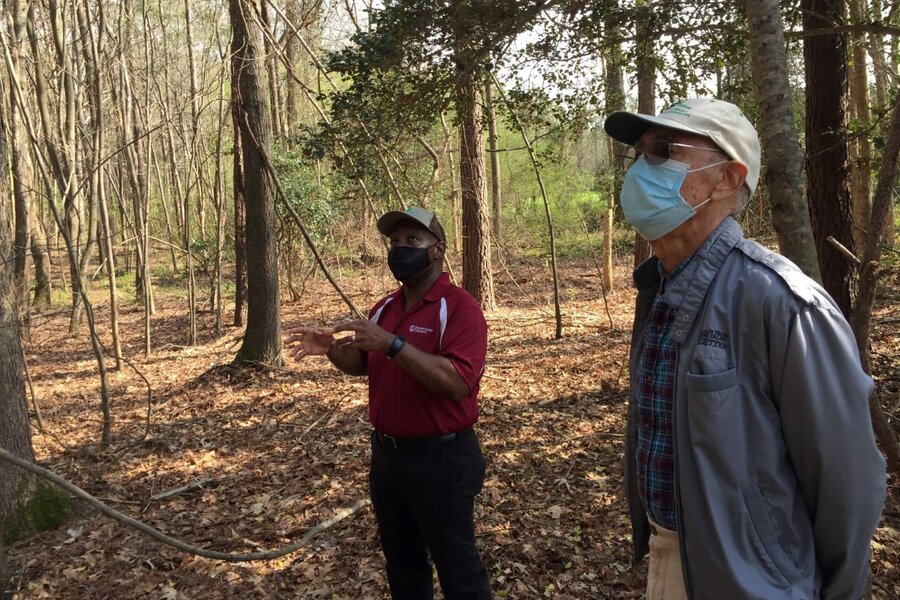 As a young man, James Baker left his hometown in North Carolina and forgot about the small farm and patch of woodland he and his seven brothers would later inherit.

“After high school and college, I left, and I never had any intentions of coming back to the farm or doing anything with it,” said Mr. Baker, who now lives on the property with one of his siblings, all of whom are in their 70s and 80s.

But a regional forestry program that aims to tackle a century of dramatic land loss among Black Americans helped Mr. Baker and his brothers see the potential of their woodland, which could soon start generating regular income from timber.

“We’ve learned there are other things that can be done, especially with the timberland … how to manage it, how to handle it in a way to maximize the income,” he said, standing behind the neat farmhouse built decades ago by his parents.

African American families like the Bakers lost more than 90% of their landholdings during the 20th Century, according to government figures, due to factors such as predatory developers and a lack of access to the legal system and expert advice.

Many of the families were poor but rich in land, offering an opportunity today for those who still own property, said Alton Perry, a former U.S. government forester who works as program manager with the Sustainable Forestry and Land Retention (SFLR) project.

A key aim of the initiative, a network of local efforts in the southern United States, is to get families to see the forests they own as a resource, Mr. Perry told the Thomson Reuters Foundation at the Bakers’ farm near the town of Roanoke Rapids.

“Many folks who haven’t been provided assistance didn’t realize that forestland was an asset – they saw it as a liability,” said Mr. Perry, who manages the project in North Carolina for the Roanoke Electric Cooperative.

The cooperative, which has a key focus on economic development among its members, is one of eight local hubs in the SFLR network, working across swathes of the South.

Besides helping the family unlock income from their land, the program also helped them start thinking about wills and how to ensure the land stays in the family, said Albert Baker, another of the brothers.

Concern about the devastating loss of land among Black Americans has gained prominence in recent years, including in proposed federal legislation that seeks to “restore the land base lost by Black farmers.”

Under the draft law, Black farmers could be offered land grants of up to 160 acres, according to its authors.

The SFLR project seeks to address this history of land loss directly, through a combination of forestry assistance and legal services.

It began in 2013 as four pilot projects, created by the U.S. Agriculture Department, U.S. Forest Service, and the U.S. Endowment for Forestry and Communities, a nonprofit.

Since then, it has worked with nearly 1,400 landowners with more than 87,000 acres of land, according to the network.

“The program has changed lives by turning land into a productive asset and an additional income revenue stream for families in the South,” Jan Davis, deputy regional forester with the Forest Service’s Southern Region, said in emailed comments.

She said the Forest Service and U.S. Endowment have also started looking into promoting sustainable forestry to Hispanic forest landowners.

The SFLR effort followed years of mistrust among African American farmers toward the Agriculture Department and other U.S. government entities, including over discriminatory practices, something the department acknowledged in 1998.

“African American forestry owners were not getting the type of technical assistance and on-the-ground support they needed to make forestry sustainable,” said Savonala “Savi” Horne, executive director of the Land Loss Prevention Project, which works nationally and is not affiliated with the SFLR project.

She said the program has led to a “sea change” in terms of getting the necessary technical assistance to land-owning families.

“The whole concept here is about opening up the potential of the land to a family,” said Josh F. Walden, chief of operations at the Center for Heirs Property Preservation, part of the SFLR network in South Carolina.

Keep it in the family

Mr. Walden and his colleagues approach the issue of land loss with a particular focus on heirs property, a legal complication that arises when lack of clear property title means multiple heirs can claim rights to land or a house.

Owners of heirs property are not only unable to access government assistance such as post-disaster help or farm subsidies, but are vulnerable to predatory developers who can force the sale of disputed land.

Long-term timber income can make land ownership a boon, rather than a burden, Mr. Walden said, helping a family keep their property in the first place and motivating heirs to sort out the legalities behind any title disputes.

A report last year by Forest2Market, a consultancy, found that improvements due to management under the SFLR program, including clearing land titles, bolstered land values by upwards of $3,000 an acre.

At the Bakers’ farm in North Carolina, a mixture of pine trees, sweetgum, red maple, white oak, and other species grow on the roughly 80 acres of woodland.

Through the SFLR program, the brothers have been working with a forester from Enviva, a biomass pellet producer, to identify the trees growing on the land, offer management options, and get the forest certified as sustainable – raising the price of their timber.

“The whole key is for this to add value to the property,” said Chris Brown, a community relations manager with Enviva. “And then you can keep it in the family.”