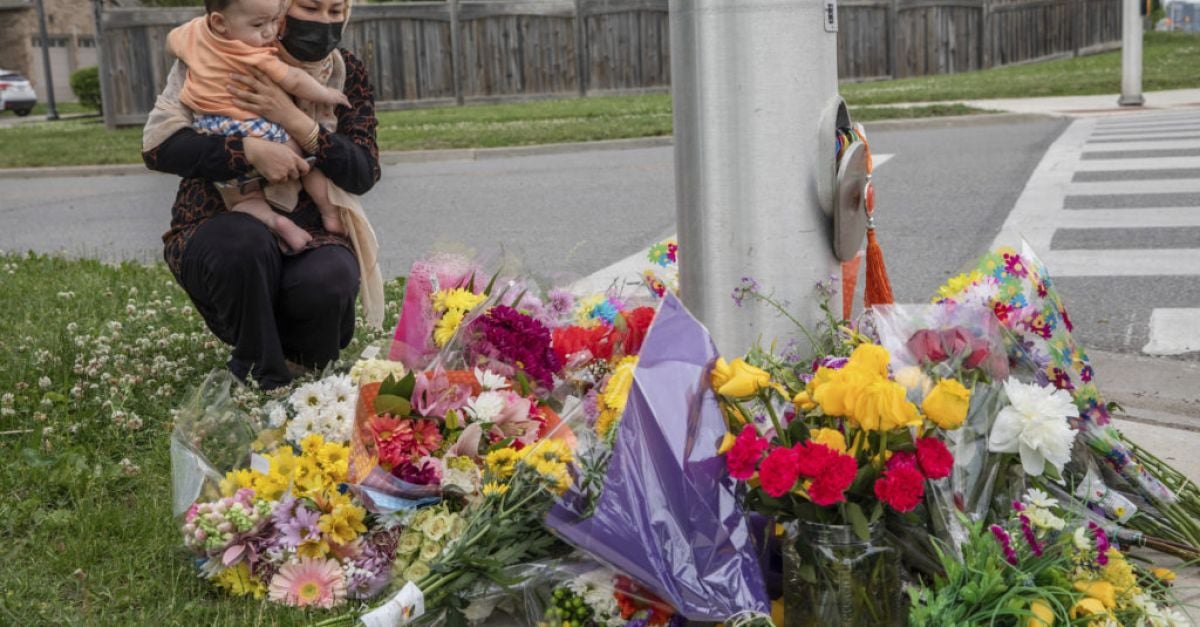 A driver ploughed a pick-up lorry into a family of five, killing four of them and seriously injuring the other in a deliberate attack that targeted the victims because they were Muslims, Canadian police said.

Authorities said a young man was arrested in the car park of a nearby shopping centre after the incident on Sunday night in the Ontario city of London.

Police said a black pick-up vehicle mounted a kerb and struck the victims at a junction.

“This was an act of mass murder perpetuated against Muslims,” Mayor Ed Holder said.

“It was rooted in unspeakable hatred.”

The extended family issued a statement identifying the dead as Salman Afzal, 46; his wife Madiha, 44; their daughter Yumna, 15; and a 74-year-old grandmother whose name was withheld.

The boy taken to hospital was identified as Fayez.

“Everyone who knew Salman and the rest of the Afzal family know the model family they were as Muslims, Canadians and Pakistanis,” the statement said.

“They worked extremely hard in their fields and excelled.

“Their children were top students in their school and connected strongly with their spiritual identity.”

A fundraising webpage said the father was a physiotherapist and cricket enthusiast and his wife was working on a PhD in civil engineering at Western University in London.

Their daughter was finishing ninth grade, and the grandmother was a “pillar” of the family, the page said.

The family said in its statement that the public needs to stand against hate and Islamophobia.

“This young man who committed this act of terror was influenced by a group that he associated with, and the rest of the community must take a strong stand against this, from the highest levels in our government to every member of the community,” the statement said.

Police said Veltman, a resident of London, did not know the victims.

Detective Superintendent Paul Waight said police had not determined if the suspect was a member of any specific hate group.

He said London police were working with federal police and prosecutors to see about potential terrorism charges.

He declined to detail evidence pointing to a possible hate crime, but said the attack was planned.

About a dozen police officers combed the area around the crash site looking for evidence.

Blue markers on the ground dotted the junction.

“We believe the victims were targeted because of their Islamic faith,” Police Chief Stephen Williams said. “… There is no tolerance in this community who are motivated by hate target others with violence.”

Canada is generally welcoming toward immigrants and all religions, but in 2017 a French Canadian man known for far-right, nationalist views went on a shooting rampage at a Quebec City mosque that killed six people.

One woman who witnessed the aftermath of the deadly crash said she could not stop thinking about the victims.

Paige Martin said she was stopped at a red light when a large vehicle roared past her.

She said her car shook from the force.

“I was shaken up, thinking it was an erratic driver,″ Ms Martin said.

Minutes later, she said, she came upon a gruesome, chaotic scene near her home, with emergency personnel running to help, a police officer performing chest compressions on one person and three other people lying on the ground.

A few dozen people stood on the sidewalk and several drivers got out of their cars to help.

“I can’t get the sound of the screams out of my head,” Ms Martin said.

From her apartment, Ms Martin said she could see the scene and watched an official drape a sheet over one body about midnight.

“My heart is just so broken for them,” she said.

I spoke on the phone this evening with @LdnOntMayor and @NTahir2015 about the hateful and heinous attack that took place in London, Ontario yesterday. I let them know we’ll continue to use every tool we have to combat Islamophobia – and we’ll be here for those who are grieving.

To the Muslim community in London and to Muslims across the country, know that we stand with you. Islamophobia has no place in any of our communities. This hate is insidious and despicable – and it must stop.

The National Council of Canadian Muslims said Muslims in Canada have become all too familiar with the violence of Islamophobia.

“This is a terrorist attack on Canadian soil, and should be treated as such,″ council head Mustafa Farooq said.

Nawaz Tahir, a London lawyer and Muslim community leader, said, “We must confront and stamp out Islamophobia and Islamic violence — not tomorrow, today, for the sake of our children, our family, our communities.”

“To the Muslim community in London and to Muslims across the country, know that we stand with you. Islamophobia has no place in any of our communities. This hate is insidious and despicable — and it must stop,” Canada’s prime minister Justin Trudeau tweeted.

World Ocean Day 2021: This is how climate change may alter 10 of the world’s natural wonders