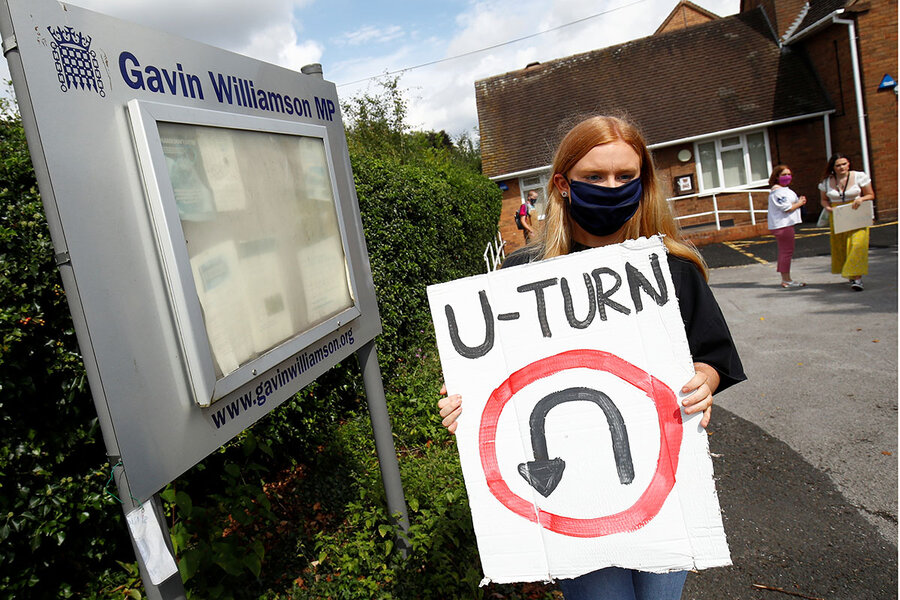 Rahul Rajendran dreamed of attending an Ivy League school in the United States to study astrophysics.

A native of Klang, a port town on the outskirts of Kuala Lumpur, Mr. Rajendran earned a scholarship to a prestigious British international school in Malaysia, and figured the A-level path – an intensive course of study culminating in globally recognized tests taken by students in the United Kingdom – was his ticket to a top university.

But then the pandemic intervened, canceling the high-stakes exams on which he and legions of other students in the U.K. and around the world rely. As he was forced to recalibrate his dreams, he came to a realization that mirrors a growing trend: the desire for a fairer and more comprehensive way to assess students and their abilities.

In the U.S., schools have increasingly dropped testing requirements for college applicants. Across the pond, the U.K. is facing similar calls to consider a more holistic approach to assessing students.

“It paints a better picture of how a student has evolved if you evaluate us throughout the year, rather than having like one big exam at the end, where it’s like a do-or-die kind of scenario,” says Mr. Rajendran.

Unbeknownst to him, a movement for just such a change is happening 6,500 miles away in the U.K., where the chaos caused by the pandemic has provided new momentum for scrapping the advanced A-level exams – as well as the General Certificate of Secondary Education tests, or GCSEs – in favor of a more holistic and fairer way of assessing students for university placement and jobs.

“I’m always wary of talking of revolutions, because they tend to throw out the baby with the bathwater, [but] we’re at a tipping point,” says Bill Lucas, a learning expert at the University of Winchester and an advisory group member of Rethinking Assessment, a hub for U.K. educators to catalyze change by designing and piloting new models. “Educators are thinking this is a really interesting moment to take stock,” he says.

Taking on the status quo

Billed by some as an opportunity to enact the most fundamental education reform since World War II, some educators are looking for ways to measure student capabilities that are more accurate than the one-size-fits-all exam approach that has prevailed for generations. Such tests are widely seen as favoring privately educated students, and often provide little more than a snapshot of an  ability to memorize volumes of material.

The push for new models also reflects a desire to better measure aptitude, competence, and potential – for U.K. students in England, Wales, and Northern Ireland and the more than 175,000 pupils in more than 125 countries that annually take the international version of the A-level exams. The trend has been underway for years, but the recent disruption of the mandatory string of exams is catalyzing it anew.

When Rethinking Assessment was launched last year, its coalition of educators – including a Cambridge University neuroscientist and the headmaster of famous all-boys school Eton College – noted in an open letter to The Sunday Times in London that “post Covid there is a growing appetite for change.”

All students, regardless of exam results, “leave school with only a partial record of their strengths,” the educators wrote. “No credit is given to those who are skilled communicators, thoughtful team players, clever problem solvers or creative thinkers; in short, the stuff that helps you thrive in life, and makes you invaluable to employers.”

“Let’s make the legacy of the COVID crisis an assessment system that more proportionately reflects the range of knowledge, skills and talents of all our young people,” adds Geoff Barton, head of the U.K.’s Association of School and College Leaders, on the Rethinking Assessment advisory group web page.

It’s an echo of what’s been happening in the United States, where test-optional admissions have become more common. Even before the pandemic, some colleges had begun giving students the choice of whether or not to submit their SAT or ACT scores. The pandemic accelerated that trend: The University of California, one of the largest university systems in the U.S., for example, voted a year ago to phase out SAT and ACT score requirements. One board member called the tests “extremely flawed and very unfair.”

Recent research looking at practices of U.S. private colleges and universities pre-pandemic, however, suggests that a test-optional approach increased the number of women, but barely budged numbers for low-income and Black, Latino, and Native American students.

“From numbers towards narratives”

The pandemic has changed habits, says Professor Lucas, noting impacts from Canada and New York to Australia. Some alternative approaches are already shifting “from numbers towards narratives,” which include creating portfolios and recognizing life-skill strengths like creative thinking and leadership. The key question today, he says, is “why do we reduce however many years of formal schooling to a few grades and numbers?”

In the U.K., the first step is brainstorming solutions that work and can be applied from school to school. The pandemic has highlighted the need: As traditional exams were canceled, students were subjected to a variety of ad hoc assessment methods.

Last year, the exam regulator, Ofqual, applied an algorithm that incorporated a school’s overall past performance in the calculation of individual grades – causing a nationwide drop of nearly 40% from predicted results. That method was subsequently withdrawn after an outcry and student protests. For many, the results derailed the path to a planned college and career.

“I and others like me … haven’t had a chance this year to prove ourselves and show we can get good grades despite everything,” Samantha Smith, who was homeless for a while and held down several jobs while working on her A-level studies, told the Shropshire Star newspaper last year.

This year, A-level results, released Aug. 10, will be determined by teachers, and depend much more on class work and mock test results. The speedy shift to a new approach, with little official guidance, has raised concerns among parents, who are already gearing up for legal battles over the results.

Giving teachers a bigger role in the process has future potential, says Magnus Bashaarat, headmaster of tuition-based Bedales School in Petersfield, England. “The way that they assess and know their students is much more accurate and representative – and this is the important bit, fairer – than a terminal, cliff-edge, high stakes exam,” he says.

Still, finding an alternative to the current system will take time, note observers. Any permanent change would require key decisions by the current Conservative government – which may not happen easily. A return to normal A-level and GCSE exams in 2022 is more likely.

But Rethinking Assessment and other educators are pursuing a classroom-tested system that they hope will one day be recognized by by universities and employers.

Bedales School, for example, has for more than a decade offered alternatives to GCSE exams, taken at age 16. Instead of the traditional intensive barrage of tests, the school’s method focuses on collaboration, research-based topics, presentation, and an exam element. The school is hoping to extend such methods to replace A-level exams taken two years later.

Universities have found it difficult to differentiate students by test results alone, Mr. Bashaarat says, and there is also a push from employers who in the past have hired school graduates who did well at A-levels but who lacked key personal qualities and skills that A-levels do not measure.

“It should be an opportunity for generational change, shouldn’t it?” says Mr. Bashaarat, who is also a member of the Rethinking Assessment advisory group. “Because the pandemic and the reaction to it can liberate you to make these absolutely decisive and grand changes, and change the architecture, forever.”

Almost a year on from his own A-level exams Mr. Rajendran in Malaysia has not rushed straight into university. His expected A-level results were downgraded by the test score algorithm – and even after adjustments by his teachers, his final grades were not what he had hoped for, and failed to reflect two years of intensive study, he says. He has given up his Ivy League dream for now, and is applying to local universities in Malaysia, thinking about a computer science degree rather than astrophysics.

“There is no use thinking about the past, really,” he says. “I’m more focused on what I’m going to do in the future.”