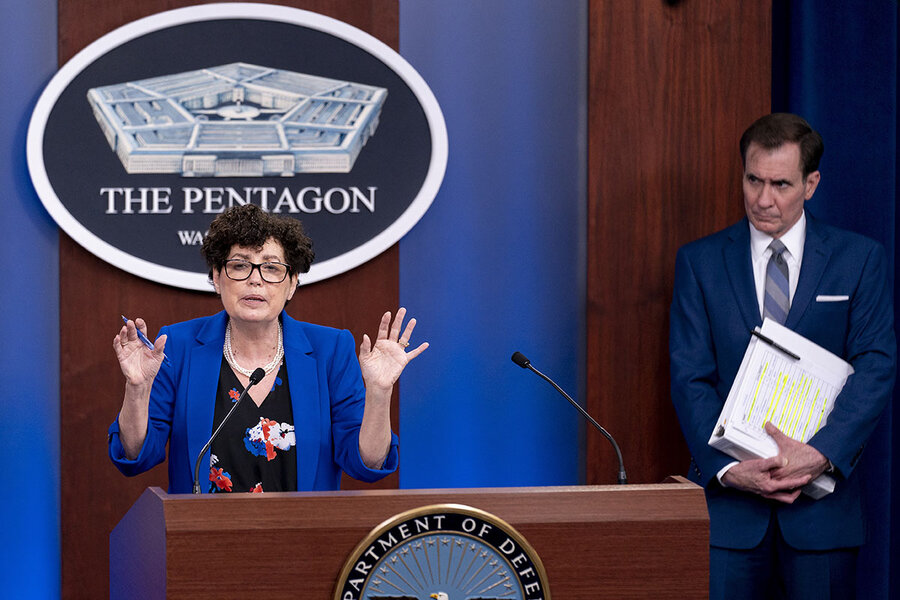 Her husband’s commander ultimately decided against a court-martial for Ms. Marsh’s alleged assailant, instead allowing him to retire after knocking him down one rank. At the same time, the command questioned whether Ms. Marsh, who was honest about the fact that she was drunk at the time, had consumed enough alcohol to be truly incapacitated during the party where she says the rape took place.

But one of the biggest problems, Ms. Marsh believes, was that her assailant – who denied that anything at all had happened – was a charismatic, well-liked guy and her husband was new to the team, and to the commander. “I don’t know any other situation,” she says, “where your boss is also your judge.”

In the military, commanders decide whether sexual assault charges against their troops should move forward, but a bill proposed by Sen. Kirsten Gillibrand, Democrat of New York, with wide bipartisan support, would remove commanders from this process, putting the authority with independent military prosecutors. The senator first proposed legislation on this issue in 2013, to no avail, but the increase in assaults may be changing minds.

“Sexual assault in our military is an epidemic and it’s clear that the current system is not working for survivors. Despite repeated efforts to protect our women and men in uniform rates of harassment and assault continue to rise while prosecutions decline. Congress has a solemn responsibility to protect our service members, and right now we have more work to do,” said Senator Gillibrand in a press release, characterizing the bill as “commonsense steps to deliver justice for survivors of serious crimes and prevent sexual assault in our armed forces.”

This year, Senator Gillibrand’s bill has gained upward of 60 co-sponsors, including Republican Sens. Ted Cruz of Texas and Joni Ernst of Iowa, a sexual assault survivor herself. A retired lieutenant colonel in the Iowa National Guard, Senator Ernst initially opposed the measure but has since changed her mind after reflecting, she said, upon her own experience as well as the future of her daughter, who attended West Point.

A growing and underreported problem

Pentagon officials have vehemently opposed such changes to military sexual assault prosecution in the past, saying it would erode commanders’ primary responsibility – namely to ensure good order and discipline in their ranks. Gen. Mark Milley, the chairman of the Joint Chiefs of Staff, argued precisely this in his 2019 Senate confirmation hearing, for example.

But despite the Pentagon’s best efforts, reports of sexual assault in the U.S. military have long been on the rise. According to Department of Defense surveys, some 20,500 service members were sexually assaulted in 2018, a rate that jumped almost 40% over 2016 figures. For women, these figures were at the highest levels since 2006.

At the same time, more than three-quarters of all 2018 victims say they did not report the crime. This is in large part, analysts say, because for those who do pursue charges, 4% of cases result in a court-martial, and 0.8% of offenders are convicted of a nonconsensual sex offense, recent statistics show.

As these dismal reports have flowed into Congress annually, lawmakers have become a bit less deferential to military leaders’ pleas for good faith and patience. They are now weary of the argument, made by Pentagon officials for years, that upticks in reports of sexual assault are actually a good thing, since they show troops are comfortable coming forward.

At the same time, commanders, too, are beginning to acknowledge that something must change.

“I was adamantly opposed to that for years,” General Milley told The Associated Press and CNN last month, referring to removing command authority for sexual assault. “But I haven’t seen the needle move.” Speaking of the need to stamp out the crime, he added, “We have to. We must.”

It’s a sentiment that was beginning to take hold back 2015, when then chairman of the Joint Chiefs of Staff, Gen. Martin Dempsey, though opposed to Senator Gillibrand’s efforts, said he could imagine a different path if there was no improvement. “If we haven’t been able to demonstrate we’re making a difference, you know, then we deserve to be held to the scrutiny and standard.”

A “no confidence” vote

In addition to sexual assault, Senator Gillibrand’s bill also removes commanders’ ability to prosecute other major crimes, including murder, manslaughter, and child pornography. But there are holdouts. “Commanders are in the best position to determine the morale and discipline needs of their units, and how a particular criminal offense might impact that,” says retired Maj. Gen. Charles Dunlap, who served as the Air Force’s deputy judge advocate general and is now the executive director of the Center on Law, Ethics, and National Security at Duke University. “The proposal essentially diminishes the role of the most important person in military society: the commander.”

What’s more, Senator Gillibrand’s bill, he adds, amounts to a vote of “no confidence” in them.

When it comes to sexual assault, that’s exactly what it is, says retired Col. Don Christensen, chief prosecutor for the Air Force from 2010 to 2014 and now president of Protect Our Defenders, an advocacy organization. “This says to the military, ‘You failed on this, and you’ve been given time to change and you didn’t, so now you really have to – the way you’re thinking, the way you treat people.”

An independent panel convened by Secretary of Defense Lloyd Austin is on the verge of going public with its own recommendations to take authority for sexual assault prosecutions away from commanders as well, in an effort, analysts say, to restore the faith that many service members have lost in the system.

Secretary Austin, who retired from the Army as a four-star general, has indicated that “all options are on the table.”

“We must commit ourselves to eliminating these attacks on our own people. I know you have worked this problem for many years,” he wrote in a recent memo to the force. “We simply must admit the hard truth: We must do more.”

Amy Marsh says that as she reflects on her family’s experience in the wake of her sexual assault, “There are so many times when I wish I hadn’t reported.”

Her husband was ultimately reprimanded for fraternization, because he had enlisted troops over to his house, and Ms. Marsh’s credibility was called into question when commanders learned that the couple were in marriage counseling before the assault. “I thought that meant we’re committed to a strong relationship,” she says.

The whole episode has essentially ended her husband’s military career. “This has destroyed any chance of him being promoted, so he’s going to have to leave the Air Force. It’s so frustrating because if I hadn’t reported, none of this would’ve happened.”

Still, “I feel very hopeful that this bill will pass, and that it will prevent retaliation against future victims who come forward,” she says, adding, “I don’t want anyone to have to go through what we went through.”

As a heat wave hits, here’s how to keep yourself — and your pets — safe