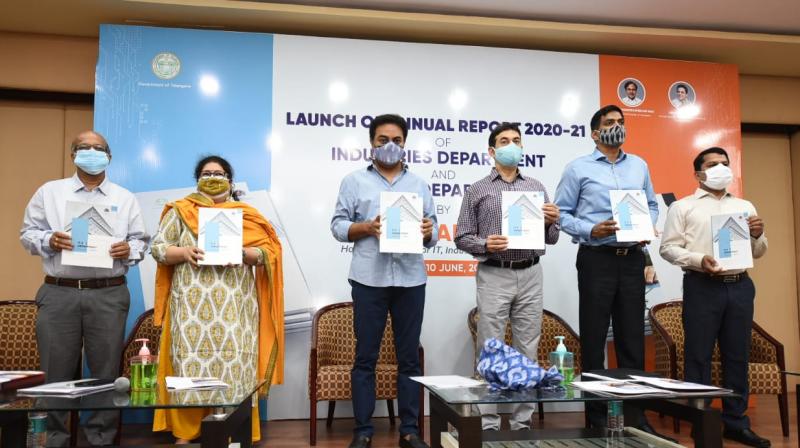 Hyderabad: Despite the COVID-19 pandemic, Telangana recorded nearly 13 per cent growth in IT and ITeS exports at over Rs 1.45 lakh crore over last fiscal, Minister for IT and Industries KT Rama Rao said on Thursday.

In the annual report on IT, Electronics and Communications Department for FY21, Rama Rao said during the last fiscal, Telangana added 46,489 new jobs taking the total IT/ ITES employment to 6,28,615, year-on-year increase of 7.99 per cent compared to FY 2019-20.

"Despite the COVID-19 pandemic, Telangana once again proved its mettle by boasting a growth of 12.98 per cent in the IT/ITeS Exports over the previous year recording a total of Rs 1,45,522 crore in IT/ITeS Exports. Telangana has seen more than double the estimated average national growth rate during this period and the employment in the IT/ITeS sector has increased by 7.99 per cent," he said in the report.

Minister @KTRTRS speaking at the launch of Annual Report 2020-21 of Industries Dept and IT, E&C Dept https://t.co/T2ZbJgvcLJ

According to the report, Amazon Data Services is setting up three Data Centres in Fab City, Pharma City and Chandanvelly in Telangana with an investment of Rs 20,761 Crores (USD2.77 bn).

Telangana has always been on the forefront of promoting the use and development of new-age technologies like AI, ML, Drones and Blockchain not only as business opportunities, but as torchbearers of innovation within the government, the minister said.

The state has launched marquee projects such as Artificial Intelligence for Agricultural Innovation (AI4AI) and Medicine From The Sky (MFTS) along with our partners at the World Economic Forum and NITI Aayog, he added.

The controversial Keystone XL pipeline project has been canceled