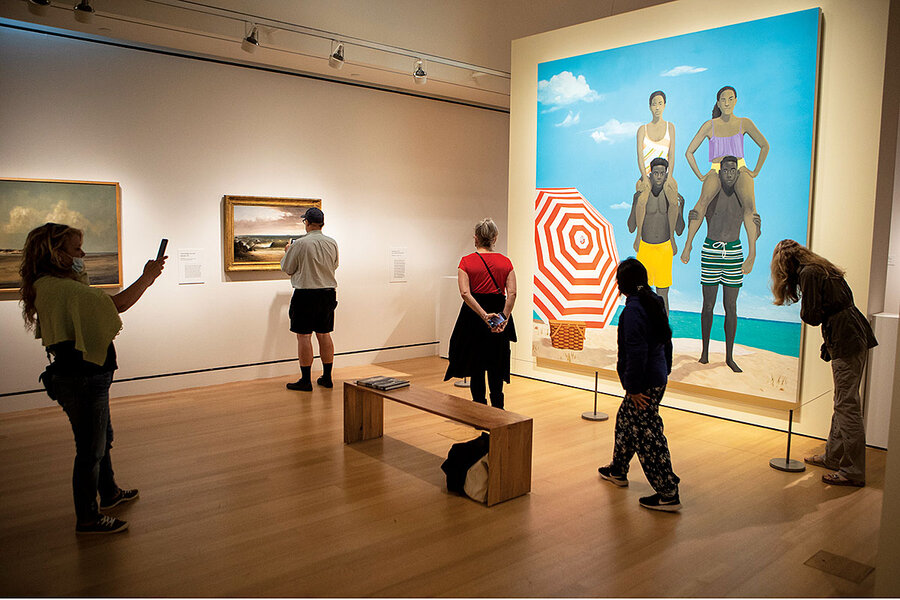 As locked-down Americans emerge from pandemic weariness and dream of summer beach excursions, the Peabody Essex Museum in Salem, Massachusetts, is embracing the ocean as a metaphor for the American experience.

A new exhibition, “In American Waters: The Sea in American Painting,” is more expansive and diverse than just a feast for the eyes – and the featured artists are not just the names one might associate with maritime art.

While some billowing sails and wooden hulls are present here, the curators set out to demonstrate that a nautical collection could feature more than just ship portraits. The variety of works included is meant to generate conversation and perhaps shake things up a bit.

For many, the beach conjures images of summer frivolity. But ocean stories, like those told via a new art exhibition, can reveal deeper truths about the American experience.

“The interpretation of the sea in American art is much broader than people have ever recognized,” says Daniel Finamore, associate director of exhibitions and curator of maritime art and history at the Peabody Essex Museum (PEM). “It’s my hope that ‘In American Waters’ will explode the confines of the genre so far.”

Different visions of the sea

Assisting Mr. Finamore and the exhibition’s team of curators in that goal are artists who consider the theme from different angles. Currents of sensitivity, inclusivity, and originality run throughout the exhibition – fed by works such as Georgia O’Keeffe’s modern and mystical “Wave, Night” (1928) and a contemporary rendering of teenagers at the beach, “Precious jewels by the sea” (2019), by Amy Sherald, who painted former first lady Michelle Obama’s portrait. The exhibition also navigates directly into such atypical areas as the sea’s transformative significance for immigrants and enslaved people.

One of the show’s early visitors was pleasantly surprised by its depth and breadth. “I was blown away by the inclusion of female, Black, and Indigenous artists,” says Sharon Reidbord of Danvers, Massachusetts, on opening day in late May. “The slave-trade piece was also interesting, as was the structure of the show.”

The diversity of artists and styles is intentional, meant to prompt contemporary conversation, says PEM associate curator Sarah Chasse. Among the 90 works on display are those by Norman Rockwell, Hale Woodruff, Paul Cadmus, Jacob Lawrence, Valerie Hegarty, and Stuart Davis.

Also included is “New Hampshire Coast,” by Kay WalkingStick, one of only a few Native American female artists focused on marine paintings. A member of the Cherokee Nation, Ms. WalkingStick says she feels “deeply moved to be part of such an important show that combines American artists from two-and-a-half centuries.” On opening day, she praised the curators for the care they took in presenting and labeling her work, which included listing the native name of the coastal location she painted, “Pizagategok,” which means “black river.”

“Part and parcel of our history”

In some ways, an exhibition on this topic benefits from the way it already permeates national thinking.

“The sea plays a fundamental role in the American imagination,” Thomas Denenberg, director of the Shelburne Museum in Vermont, writes in an email. “It is part and parcel of our history, but, more importantly, the ocean provides one of the organizing myths of our nation. Maritime art, so often taken at face value, is as complicated as any genre with heroic imagery obscuring inconvenient truths.”

The sea and its motifs feature in much of American history, from the search for the New World onward. Settlers “moved westward, ‘sailing’ in prairie schooners across the Plains, from sea to shining sea, to gold in California,” writes John Wilmerding, Sarofim Professor of American Art, emeritus, at Princeton University, in an email. “In modern times, we maintained the nautical terminology when we sent astronauts to land on the seas of the moon. We have always identified the idea of ocean and horizon with America’s frontiers and destiny.”

Mr. Finamore says PEM and co-organizer of the exhibition, Crystal Bridges Museum of American Art in Bentonville, Arkansas, wanted to make the show about the sea on a visceral level. Viewers travel through six sections, starting with the lure of “Horizons,” then on to “Just Off Shore,” “A True Likeness,” and “Voyages,” before anchoring “In Port,” and ending with “Beachcombing.”

As they experience this metaphorical voyage out to sea and back, visitors are challenged to think about the cultural and historical significance of the American waters and how they have resonated for various peoples – far beyond the yachting set – during the past 250 years and more.

Polish painter Theresa Bernstein’s 1923 work, “The Immigrants,” for example, captures the experience of generations of people who crowded ship decks as they crossed the ocean to begin life anew.

“The immigrant story is often overlooked in American art,” says Mr. Finamore, “yet it is part of the history of so many Americans and a critical subject today.”

The words of the 1883 sonnet by Emma Lazarus, “The New Colossus” – famous for its association with the Statue of Liberty – float nearby on a gallery wall:

“Give me your tired, your poor, / Your huddled masses yearning to breathe free, / The wretched refuse of your teeming shore. / Send these, the homeless, tempest-tost to me, / I lift my lamp beside the golden door!”

The “Voyages” section includes a handful of works relating to “The Transatlantic Slave Trade and its Repercussions,” which, it is pointed out, is another story rarely portrayed in paintings.

One of these works, “Slave-Yacht Wanderer,“ from the late 1880s, is the only known period oil painting of an American ship engaged in transporting enslaved people. Another speaks to the abolition movement, and three other works painted by Hale Woodruff in 1941 commemorate events surrounding an uprising on the Spanish slave ship Amistad, which, as explained in the adjacent label, “show how a momentary act of rebellion could instill a disenfranchised people with the agency to triumph over oppression.”

A wall quote by abolitionist Frederick Douglass offers more connection between the maritime theme and history.

“Those beautiful vessels, robed in purest white, so delightful to the eye of the freemen, were to me so many shrouded ghosts, to terrify and torment me with thoughts of my wretched condition. … You are loosed from your moorings, and are free; I am fast in my chains, and am a slave!”

“In American Waters” returns to land – and a lighter note – in the exhibition’s final gallery. “Beachcombing” brings visitors back to the sandy shore, a place of endless appeal to American painters.

“It’s not just a 19th-century American realism kind of show,” says Mr. Finamore. “We have some of the best American seascapes from that period, but we look at all the other material surrounding it to talk about the bigger conversation.”

“In American Waters” is at the Peabody Essex Museum until Oct. 3. It then travels to the Crystal Bridges Museum of American Art in Bentonville, Arkansas, where it is on view from Nov. 6 until Jan. 31, 2022.