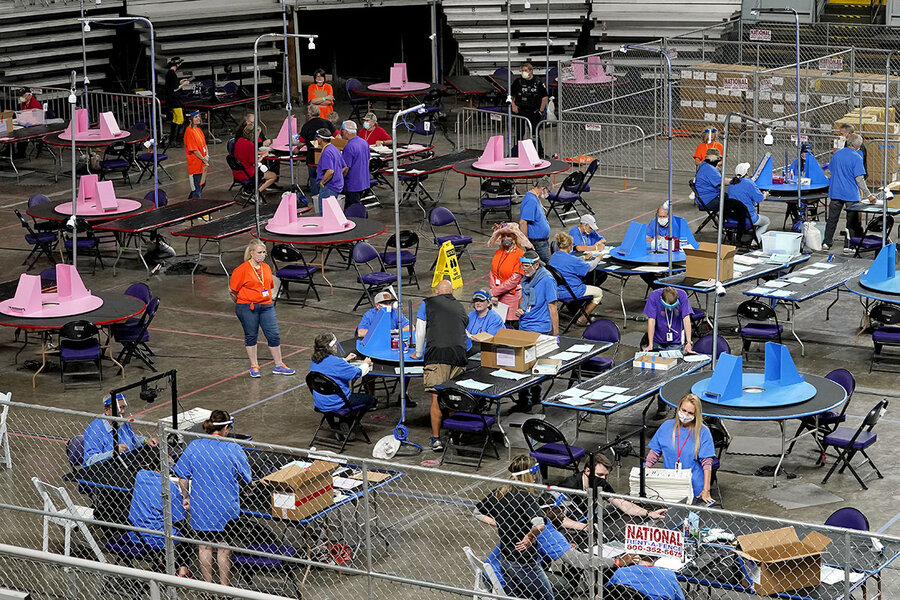 In Michigan, counting is in chaos. Local officials in conservative rural counties are refusing to certify vote totals. State legislators are suing the secretary of state, claiming she posted a link to an absentee ballot application on her website, which is illegal under a new law passed via a highly unusual voter petition procedure.

In Wisconsin, the challenger’s campaign is desperately trying to close the president’s 15,000-vote winning margin. The challenger’s lawyers are methodically combing the state’s nursing homes and residential care facilities, looking for instances where staff reminded residents to apply for absentee ballots, or helped fill them out. Both actions are now subject to criminal penalties.

Nationwide, an organized corps of partisan poll watchers, taking advantage of laws passed since 2020 that allow them greater access, have filed hundreds of affidavits claiming suspicious voter behavior. Georgia is an epicenter of this dispute. The State Election Board, with all members appointed by the Republican-controlled legislature, issues a statement saying populous Fulton County was “rife with fraud.”

Finally, Georgia’s new governor takes a momentous step. Given everything happening in the nation, he says, it seems clear that the challenger won a big victory. He asks state lawmakers to simply overturn the president’s narrow Georgia victory, saying he’s been assured that such a move is legal under the U.S. Constitution.

Is this scenario far-fetched? Maybe. It rests in part on both new 2021 laws and bills introduced that haven’t passed state legislatures yet, and the results of yet un-run governor’s races. It cherry-picks provisions to put together a worst-case scenario.

Crucially, it involves hypothetical decisions by dozens, if not hundreds of state officials who might swing either way. One of the main lessons of the 2020 presidential election was that ordinary officials, partisans themselves, can be among American democracy’s most powerful protectors.

But to political scientists and many election experts and administrators, the wave of recently passed or proposed state laws sweeping the nation in the wake of former President Donald Trump’s attempts to overturn his loss is deeply concerning.

It’s not just the provisions in these bills that in some instances would make it harder to vote. It’s that many of the bills also target election administration in ways that might make it easier for a losing candidate to jam a stick in the wheels of democratic processes.

Aspects of these laws may also implicitly reinforce the former president’s continued false claims that 2020 was stolen.

“It is a very scary moment to see this trend,” says Adam Ambrogi, director of the Elections and Voting Program at Democracy Fund, a nonpartisan foundation that focuses on American democracy’s challenges.

How U.S. elections are different

The spate of new laws also points out how unusual the American system of elections is.

Most advanced democracies run elections via a national-level, nonpartisan agency. Voting machines look the same everywhere, and so do ballots. The procedures for counting and certifying don’t vary.

But in the United States, elections are decentralized all the way down to county and local levels. A U.S. presidential election is in essence 10,000 individual elections run at the same time.

One of the downsides of this dispersion of power and responsibility is that it opens up opportunities for litigation, partisan and otherwise. Since 2000, election litigation has nearly tripled compared with pre-2000 levels, according to Rick Hasen, a professor of law and political science at the University of California, Irvine. That year, the Supreme Court ended the Florida recount – and the election – when it decided Bush v. Gore in favor of President George W. Bush.

Enter Mr. Trump and his unprecedented attack on the election results. His false claims of fraud sufficient to overturn the vote have created pressure for litigation and new laws on two fronts, according to Professor Hasen. Ordinary Republican voters convinced the White House was stolen are clamoring for action from below. From above Mr. Trump and his allies continue to push state lawmakers for action.

So-called forensic audits are the latest item of contention. Republican state senators in Arizona subpoenaed ballots from Maricopa County and hired a little-known firm named Cyber Ninjas to examine the ballots in ways experienced election officials find unprofessional at best. The Department of Justice says it may also violate federal election law. The former president is now pressing for lawmakers in Michigan, Pennsylvania, and other states to take a similar step, reportedly seeing it as a possible path to return to the Oval Office within months. There is no provision in the U.S. Constitution that would make that possible.

Between Jan. 1 and May 14, at least 14 states enacted 22 new bills that restrict access to the vote, according to figures compiled by the Brennan Center for Justice. Sixty-one bills continue to progress through 18 other state legislatures.

Overall lawmakers have introduced almost 400 restrictive bills in virtually every state in the union, according to Brennan. One of the most unusual situations is in Michigan, where Republicans control the Legislature but Democrat Gretchen Whitmer is governor. To avoid a certain veto from Governor Whitmer, GOP lawmakers may use an obscure provision of the state constitution that prevents the governor from striking down laws begun as citizen petition drives.

Provisions of these bills that alter how elections are administered, or give legislatures more control over the appointment and removal of election officials, may have received less attention than moves that affect the act of voting. But they are just as important, if not more so, according to a States United Democracy Center summary of the current spate of election legislation.

“These are substantial changes that, if enacted, could make elections unworkable, render results far more difficult to finalize, and in the worst-case scenario, allow state legislatures to substitute their preferred candidates for those chosen by the voters,” says the report.

In Arizona, Missouri, and Nevada, for instance, bills would allow state legislatures to take charge of certifying election results – giving them the opportunity to reverse results they don’t like, according to the report.

In Georgia, the just-passed legislation strips the secretary of state of a role on the State Election Board. This could be a personal affront – Secretary of State Brad Raffensperger stood up to then-President Trump in a phone call and declined to overturn the state’s election results.

In Iowa, election officials are now subject to fines of $10,000 and suspension for actions that “disregard or hinder” the object of the law, and could be hit with criminal penalties for trying to calm disruptive poll watcher activity.

Adam Ambrogi of the Democracy Fund says that many of the new bills seem aimed directly at Mr. Trump’s electoral concerns.

“There is a clear attempt to defend the ‘big lie’ – that the election was poorly run,” he says.

They also appear designed to put pressure on election officials from the top of the ladder to the bottom rung.

Is it possible to defend against the risk of election interference or manipulation?

Last week, Democratic lawyer Bob Bauer and Republican lawyer Jack Goldsmith, who together headed the Presidential Commission on Election Administration in 2013-14, announced that they would organize the legal defense of any election official who may “come under siege” from the new laws.

“The defense of the electoral process is not a partisan cause, even where there may be reasonable disagreements between the parties about specific voting rules and procedures,” the pair wrote in The New York Times.

Professor Hasen suggests strengthening intermediaries that help with truth-telling as a means of building overall trust in elections and strengthening democracy. What is required is a kind of bipartisan cross-discipline strengthening of institutions that have been attacked and degraded during the Trump era, he says.

“I’m talking about things like courts, law enforcement, academia, political parties, the school system, and civics organizations,” he emails in response to a reporter inquiry.

Mr. Ambrogi suggests urging people and organizations that have generally stayed out of politics, such as corporations and business groups, to stand up and say enough is enough. Companies based in Georgia, such as Delta Air Lines and Coca-Cola, did this following the passage of the state’s election law earlier this year.

“They need to say this is dangerous for our country,” he says.