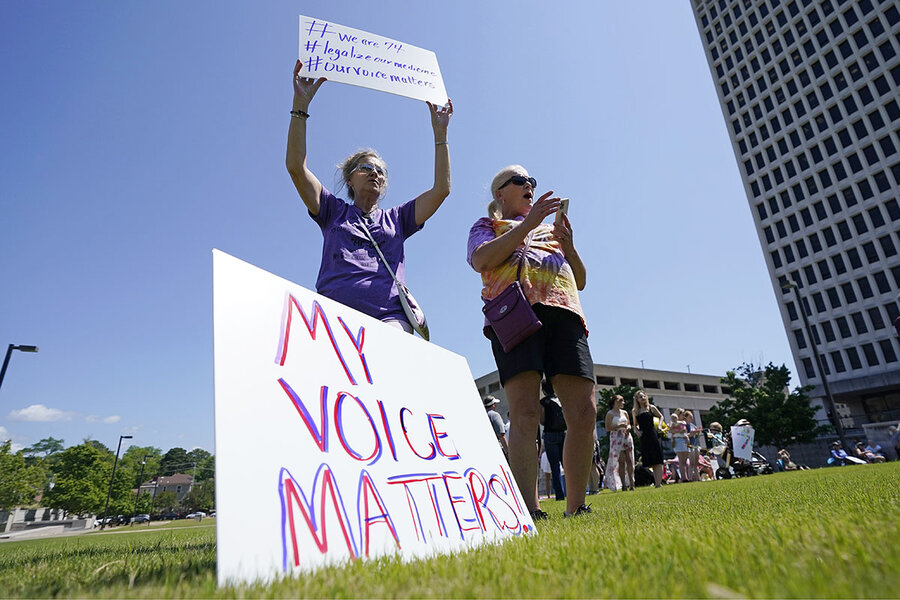 Zack Wilson describes himself as a “redneck,” born and raised in small town North Mississippi. He has a Mississippi drawl that could be heard from a mile away. He works in the firearm industry. He was also among the 74% of voters who approved of Initiative 65 last year, a citizens’ ballot initiative that would have legalized medical marijuana in the Magnolia State.

But despite the medical cannabis measure’s widespread approval by more than two-thirds of the electorate in November, its future now hangs in the balance between the legislators’ power and the voters’ will. As do future ballot initiative efforts, such as a potential Medicaid expansion and an effort to reinstate Mississippi’s 1894 flag as the official state flag, complete with a set of Confederate Army stars and bars in the top left corner.

Last month, the Mississippi Supreme Court struck down Initiative 65 – potentially even voter initiatives approved in other years since 2002 – in a sweeping, controversial 6-3 majority decision.

In many states, the ballot initiative is a fixture of politics. Yet as a legal tangle in Mississippi reveals, this symbol of direct democracy often faces pressure from other political institutions.

The ruling hinged on a legal technicality. Section 273(3) in the Mississippi Constitution allows citizens to gather signatures to put a voter initiative on the next ballot. Under state law, to be done correctly, one-fifth of the required signatures must come from each of the state’s five congressional districts. The problem: Since 2002 there have only been four congressional districts in the state.

The will of the voters was thrown out with the court’s ruling, opponents of the decision say. Some experts on state politics question the notion that the court’s decision was politicized. And the state’s top justices hold their positions by election.

Yet Mississippi finds itself as the latest state where tension has emerged between institutions of government and the notion that citizens can have a direct say on issues through the ballot box. And while the issue doesn’t always follow predictable partisan lines, the subversion of the voters’ will, as opponents describe the efforts, has become particularly evident in conservative-led states.

“We are living in a time when the ballot initiative is being used as a tool for liberation,” says Corrine Rivera Fowler, the policy and legal advocacy director with the Ballot Initiative Strategy Center watchdog group, which tracks instances such as the Mississippi Supreme Court’s ruling. “It’s being used to pass progressive policies in conservative majority states, where the legislators seem to be out of touch with the needs of their constituents.”

For Mr. Wilson in Mississippi, it feels like power brokers have undermined citizen rights.

“They’ve used the Supreme Court for a loophole they’ve known about for over 20 years,” Mr. Wilson says. In fact, he notes, the legislature has had seven bills over the years to amend the technicality cited by the court, but each attempt died in committee. “We had the expansion of Medicaid that was in the signature-gathering process, and so was term limits for politicians.”

Mr. Wilson adds, “They got a triple win with one stroke of the pen.”

And in other states, this year alone Florida, South Dakota, and Arizona, among others, have introduced measures that attempt to limit voter power historically reserved for citizens through the ballot initiative process.

Meanwhile, some legislative tug of war has become common after ballot measures pass.

In 2018, more than 64% of Florida voters approved of Amendment 4 to the state constitution, to restore voting rights to former felons who have finished their terms of sentence, including parole and probation. The next year Florida Republican lawmakers and governor sought to hobble Amendment 4’s intention by requiring that former felons pay “all fines and fees” in connection with their conviction before each individual’s voting rights can be restored in full. (A federal judge ruled parts of the law unconstitutional in May 2020.)

In 2018, 62% of Idaho voters approved of expanding Medicaid access through a ballot measure. Since its approval, conservative Idaho state legislators have continually proposed legislation to limit the process.

But in the case of Mississippi, the recent unraveling of ballot measures revisits nearly a century of setbacks.

In 1922, the Mississippi Supreme Court struck down the initiative process for the first time, only five years after 69% of Mississippians voted in approval of the 1917 Initiative and Referendum Amendment. In the 1922 Power v. Robertson ruling, the court sided with State Revenue Agent Stokes Robertson after a citizen coalition attempted to pass an initiative that would have cut his salary, which, at the time, was $40,000 annually, and which today equates to roughly $635,000. (By comparison, the governor of Mississippi today makes a little more than $122,000 annually.)

Seven decades would pass until Mississippi’s voter initiative process was restored. In 1992, state lawmakers passed a resolution that once again put the citizens’ ballot process back on the ballot. And similarly, as was the case 70 years prior, a resounding 70% of voters approved of the effort.

But after the 2000 decennial census, the state’s five congressional districts were reduced to four.

Importantly, it seems as though the court’s ruling only strikes down the legitimacy of Initiative 65’s medical marijuana program initiative. Instead, the court’s decision insinuates – without concisely stating – that all prior ballot initiative efforts that were approved by voters will stand.

Yet the court’s interpretation of the law, including that insinuation, plus the result of killing the initiative process going forward, has left legal minds “reeling from this ruling,” Ms. Rivera Fowler says.

Mississippi Secretary of State Michael Watson, a Republican and the highest-ranking election official, is now calling upon his Republican colleague, Gov. Tate Reeves, to call a special session for legislators.

It remains unclear whether or not Governor Reeves will do that.

“We are a long way from being able to make that decision,” Governor Reeves told WAPT days after the state Supreme Court handed down its ruling. He later added on the electorate’s decision to support a medical marijuana program, “The people have spoken. They made their voice heard and voted overwhelmingly to have a program, and Mississippi should have that.”

Seeking a fix in Jackson

Mississippi residents agree. But many believe the buck stops with legislators to right the wrong.

Melvin Robinson, a Jackson native and the founder of the Mississippi Cannabis Trade Association, is one of them. He believes that not only is the state missing out on a major economic opportunity – “a billion-dollar industry that would have provided jobs,” he says – it’s also set the state’s voters back in their trust of public officials, most of whom they elected.

“To restore faith in the voting process here, I think that the legislators who are chosen, that we vote for, should codify [Initiative 65] and pass it as law, exactly as it’s written,” Mr. Robinson says. “It’s very concerning that the legislature is so flippant about the opinions and wants of their constituents.”

Long before Mississippi voters made their way to the polls, the opposition aimed at the medical marijuana program initiative was evident. High-ranking officials were already speaking out against it.

“Most non-stoners say we should be careful and deliberate. Initiative 65 is the opposite,” Governor Reeves wrote on social media prior to last year’s election that legalized medical marijuana in Mississippi through the ballot initiative process. “Experts say it would mean the most liberal weed rules in the U.S.! Pot shops everywhere – no local authority. Voting against both.”

Opponents of the ruling have pointed to a politicization of the courts, but the accuracy of that particular charge remains unclear.

“This is certainly being interpreted as such, particularly because the initiative structure has been utilized in the last decade,” writes Thessalia Merivaki, an elections expert at Mississippi State University, in an email. “That said, it would be inappropriate to charge the court as political, because other initiatives had not been challenged in the court, and so we cannot know whether they would have ruled similarly on another case.”

“People are just tired of being run over”

There’s little doubt of the trouble created by the ruling for ballot initiative organizers, however. Getting initiatives from the signature process to the ballot is an enormous effort often starting years prior to a vote.

“These laws are not passed easily,” Ms. Rivera Fowler says. “For [ballot initiatives] to then be taken to a court and challenged and repealed really goes against the grain of our democracy.”

It was “suspect to see a court at such a high level seeming to take sides,” she adds.

Some Mississippi legislators have publicly supported legislative action as a fix. But a deliberate way forward continues to elude Mississippi lawmakers. Dr. Merivaki, an assistant professor in political science, says this case could act as a catalyst for a future constitutional fix in Mississippi.

“It appears that this is something the state legislature has been trying to do over the years but has failed to do it,” Dr. Merivaki writes, referring to attempts to fix the state’s constitutional technicality in recent years. It is “possible that the attention this topic has attracted, and the recent statements by Governor Reeves, will be an incentive for the state legislature to address.”

With the clock ticking, it’s the nation’s political climate at the moment that worries Mr. Wilson. Public support of institutions – and by association, lawmakers and the courts as well – has waned in recent years. And protests last summer over policing are a reminder, he says, that “it only takes one spark to light a fire.”

If there were ever two steps forward for the relation between the public and their elected officials, particularly in a state like Mississippi, then this, Mr. Wilson says, is one step back. “In the society we live in today, I mean, people are just tired of being run over,” he says. “Especially by people we have hired and put in office to, in essence, work for us.”

Election laws, 2024, and the future of democracy