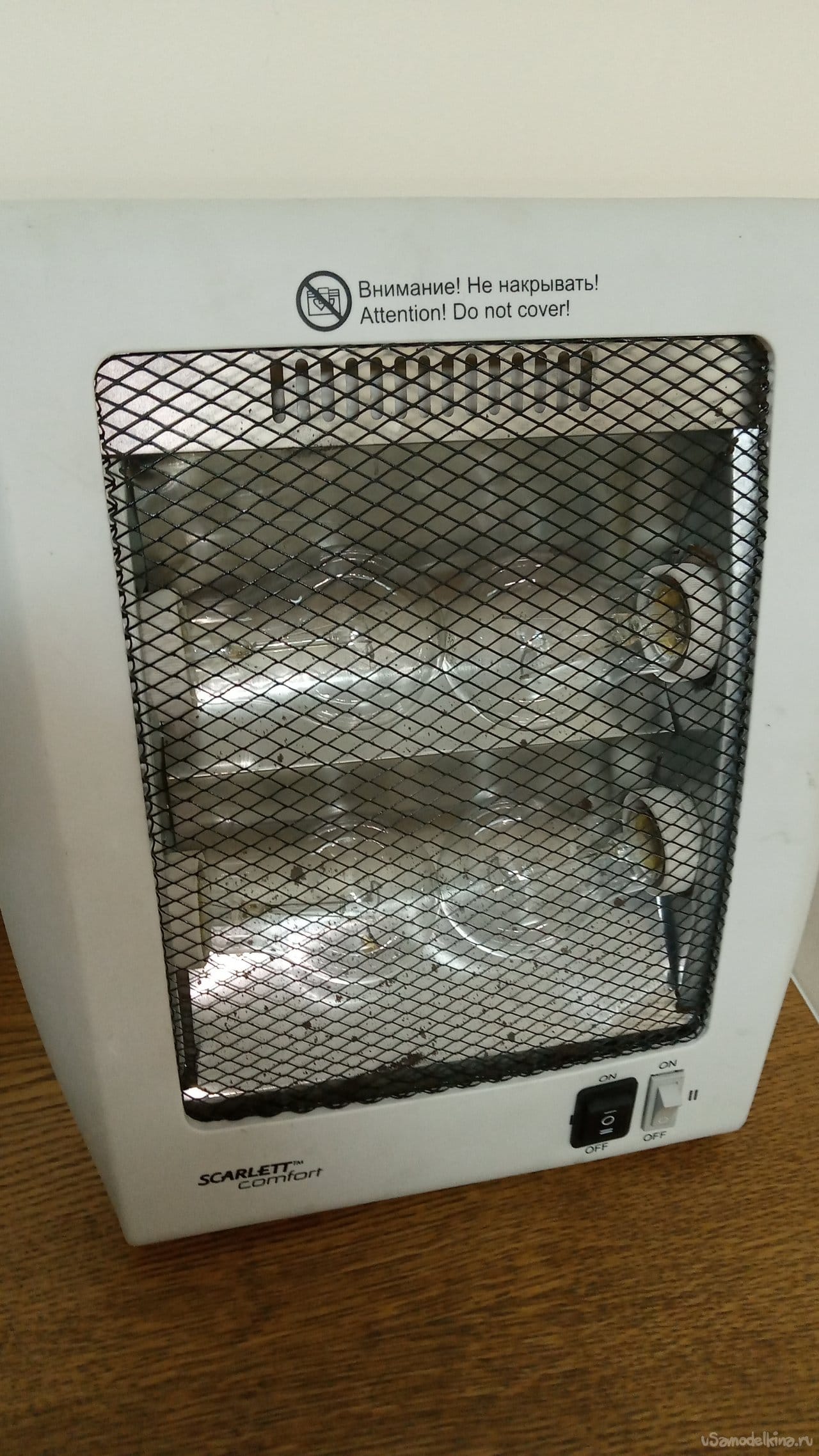 Hello, dear visitors of the site “Visiting Samodelkina”.
I have one unpleasant problem – my hands are very cold. Perhaps the reason is that in my youth they were severely frostbite. But, as soon as it gets cool, I suffer with it. Hands are very chilly, fingers turn white and lose sensitivity. Especially if they are wet … But they quickly and “go away”, as soon as I warm them up, for example, by an open fire. Working at my construction site, I solved this problem by opening the door my homemade “Buleryan “ and warming the brush before the fire. But now, I started the heating system , and there was no source of open fire in the house. He saved himself by warming his hands on a heated towel rail. But, nevertheless, it is much faster and more pleasant to do this by means of infrared radiation, and not thermal conductivity …)))). And I had the idea to make some kind of device that would replace fire in this regard … I thought of many “projects” and stopped at the fact that I would assemble an emitter from incandescent lamps, of which I have left a lot in stock since then as soon as LED appeared. As a body, it was thought to use a fluorescent lamp for the ceiling of the “Armstrong” type, throwing out four tube lamps and installing in their place many E-27 cartridges with incandescent lamps ….
There were many thoughts, but there was no time for their implementation …. And, resigned to this, I decided to just buy an infrared heater. The choice fell on an inexpensive Chinese device: 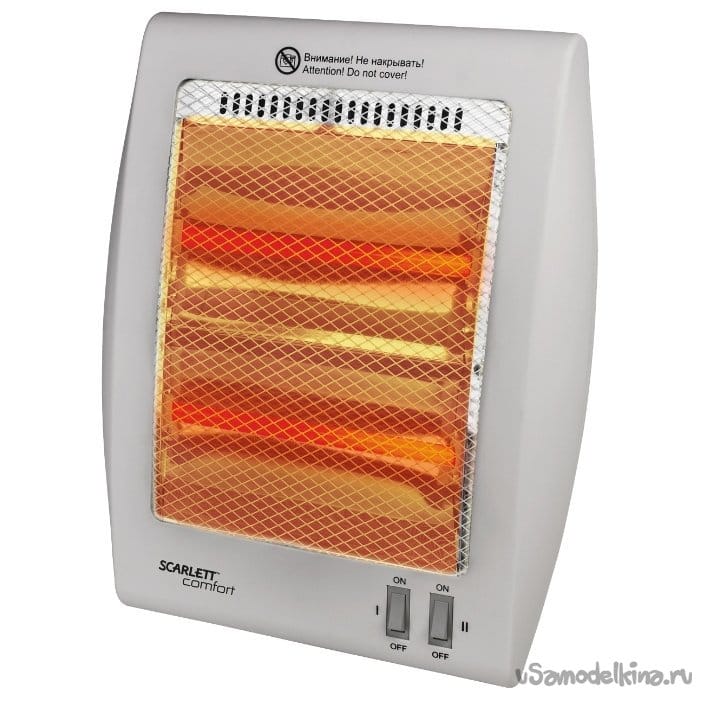 spirals located in quartz tubes.
These, only with longer heating elements, were produced in the USSR and I remember how well it warmed. Once upon a time, I even managed to fry potatoes on such a heater, lifting it up with a grate and putting on it as a frying pan “zinc” from cartridges 5.45×39, which was just the right size! ))))
But one of my acquaintances dissuaded me from buying this product, immediately waving his hands. Like, he also thought that it was an analogue of the Soviet one, and bought exactly the same. And the heater burned out safely after a little more than one month! (In fairness, I don't want to do anti-advertising! Perhaps the reason is different – the same friend said that he always had 230 instead of 220 in sockets, and when the voltage was changed everywhere to such a standard, he had 240 and above !)
After listening to it, I changed my mind about buying, but asked to give me the burned out one, if I hadn't thrown it away yet.
In general, the heater came to me, albeit with its own packaging, but also with burned out both spirals!)))
And I decided to use his case for my homemade product. There was no time again … And so, only now, when the summer has already begun and this problem has ceased to be relevant, I finally found a free evening … Nothing … There will be more winters! .. It will come in handy again! ))))
Here's what I needed:
1. Burnt out Chinese heater.
2. Ceramic lampholders E27.
4. Incandescent lamps LON-150 E27.
5. Rocker switch with three positions (6-pin).
6. Wire RKGM 1×2.5.
As, I think, you already understood, I was going to use incandescent lamps as heating elements. An incandescent lamp, by itself, is a heating device to a much greater extent than a lighting one. And if we lower the voltage, thereby making its spiral glow not so brightly, we “kill two birds with one stone” – the service life increases by orders of magnitude and the efficiency as a heater increases significantly. (This is due to the fact that the emission spectrum of a “dimly burning” incandescent lamp shifts “to the red” (thermal) side.
This can be achieved without any special devices. Simply by connecting two lamps in series. The only drawback of this is that their power is halved.
Having rummaged through the stocks of incandescent lamps, which remained unclaimed, I found many lamps with a capacity of 60 watts, several “hundred parts” and four “hundred and fifty”. Physically, the body could fit either six “sixties”, or four powerful ones. Having estimated that sixty, with a pairwise serial connection, will give me a total power of only 180 watts, I chose four lamps of 150 watts each. So it turns out 300 watts … Not enough, but still better.
I drew attention to the fact that if I arrange the lamps in pairs “head to each other”, then I cannot wrap them up, because the bulbs are almost touching. Lamps burning in full, most likely, will never burn out, but you never know …. For these reasons, I decided to make the cartridges removable. I took in my stocks four cheap, simplest ceramic cartridges E-27. 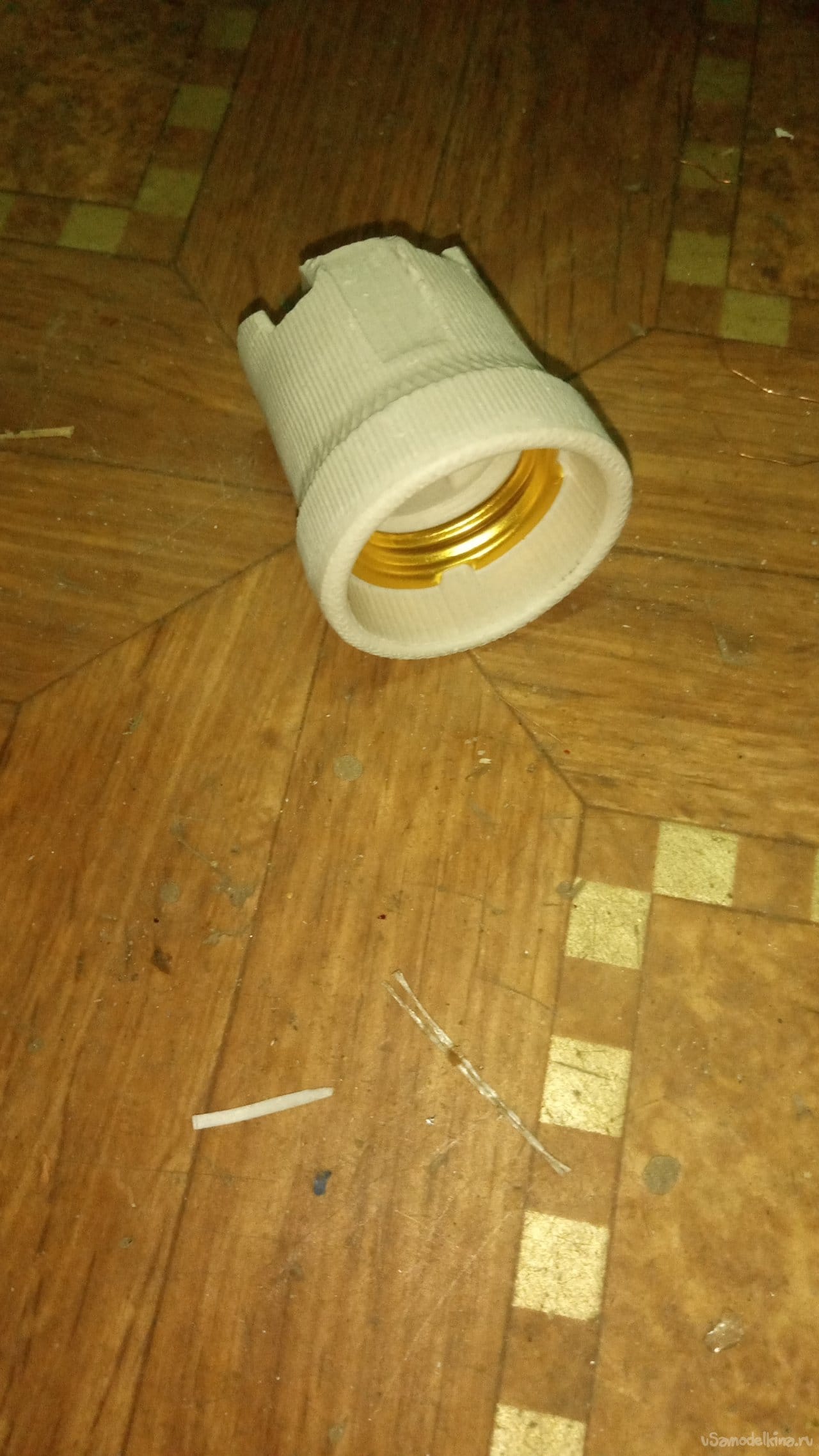 And in order to mount them, I drilled holes in the thin metal of the reflector with a stepped drill half-diameter diameter of the cartridge, cut their edges with the “sun” and simply pressed the cartridges, with the lamps already screwed into them: 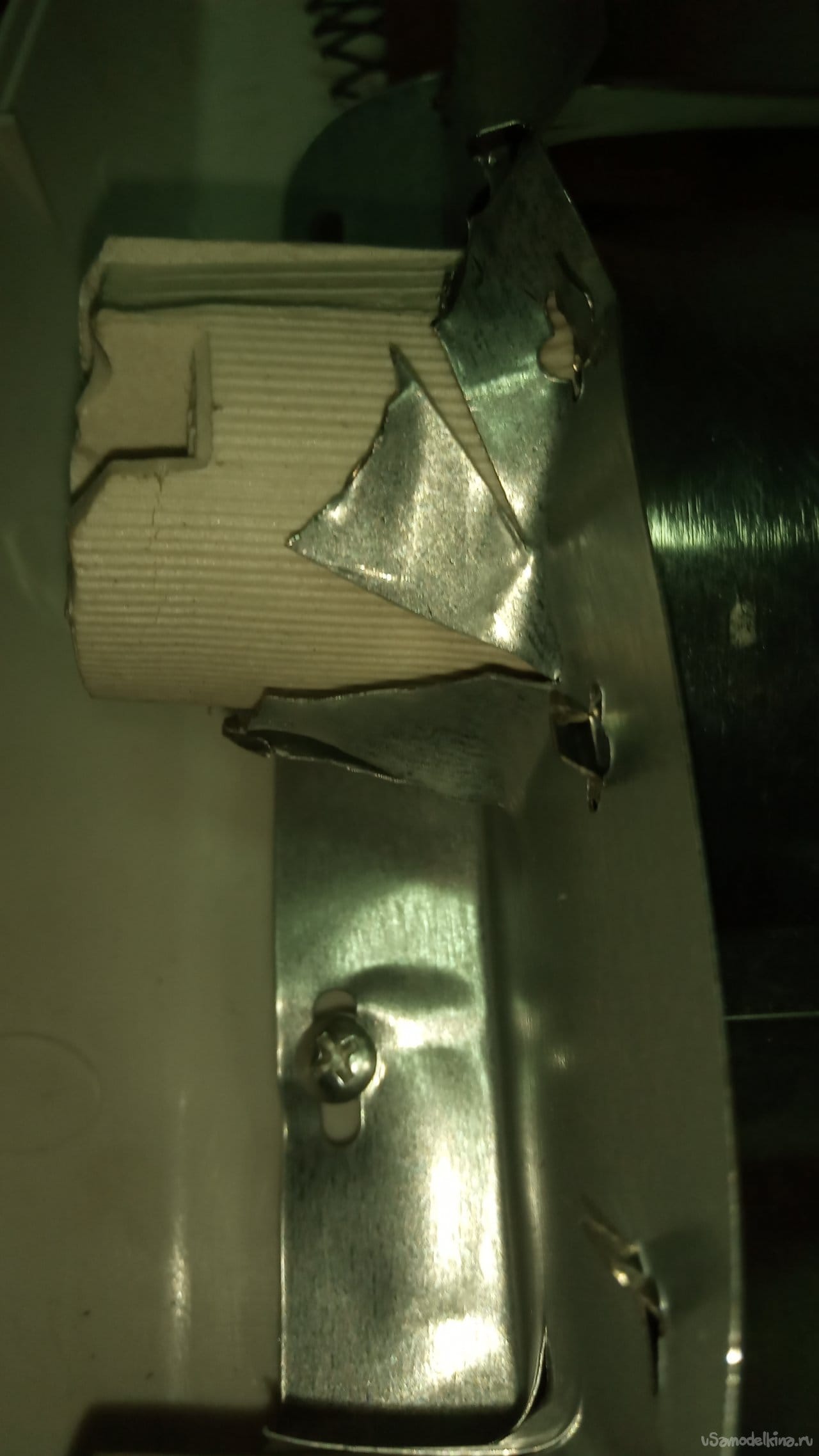 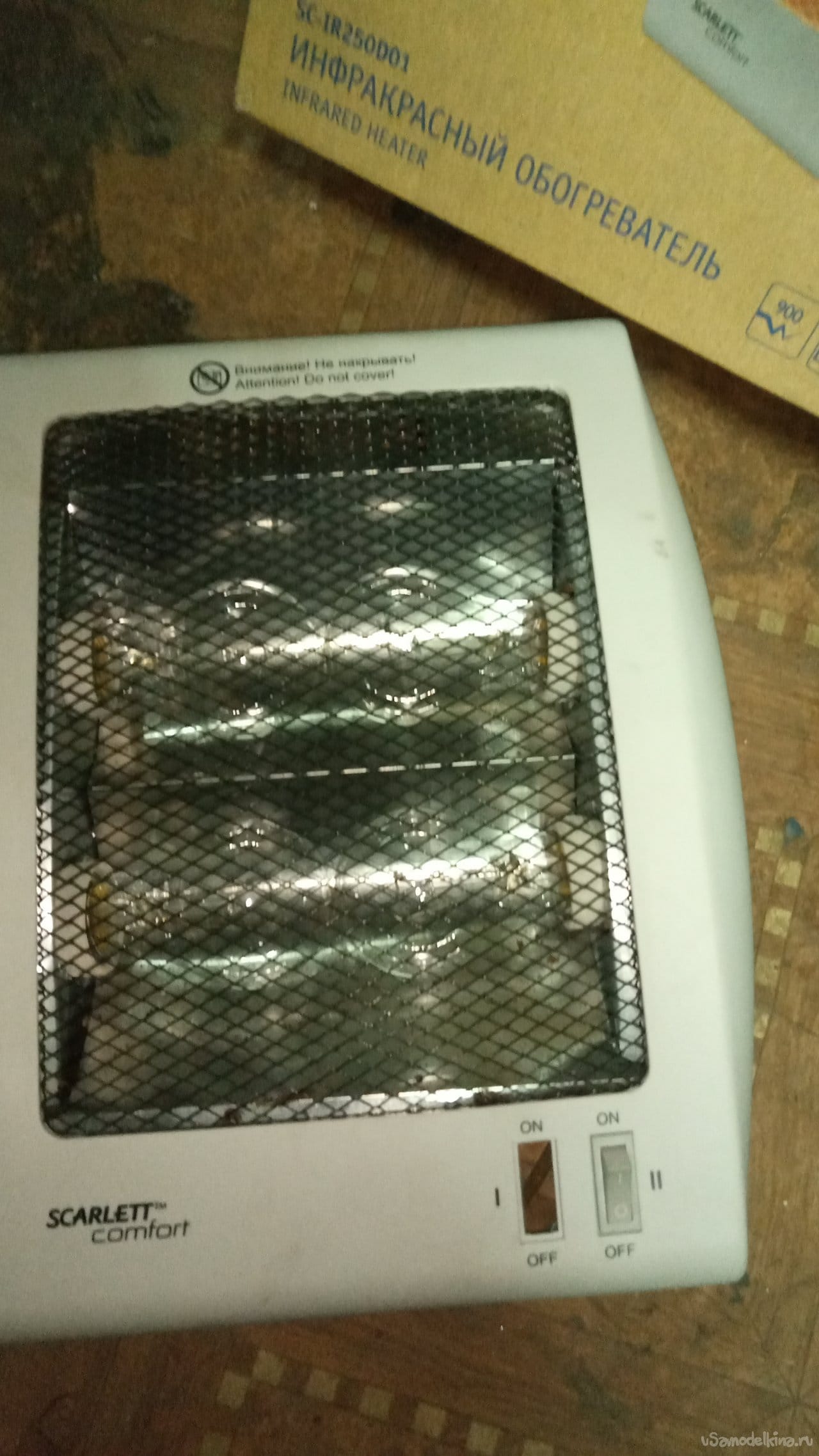 The lamps are secured. Now you need to commute. And then the idea came to my mind to make “two in one”. Let it be not only a hand warmer, but also a powerful enough lamp .. After all, if we add the ability to turn on all four lamps in parallel, we get a six-hundred-watt floodlight!
There were two key switches on the heater body – each turned on its own spiral. You won't be able to use them. Is that through a relay!)))). Having rummaged through the stocks of “electric printers”, I found such a rocker switch for three positions (six-pin) 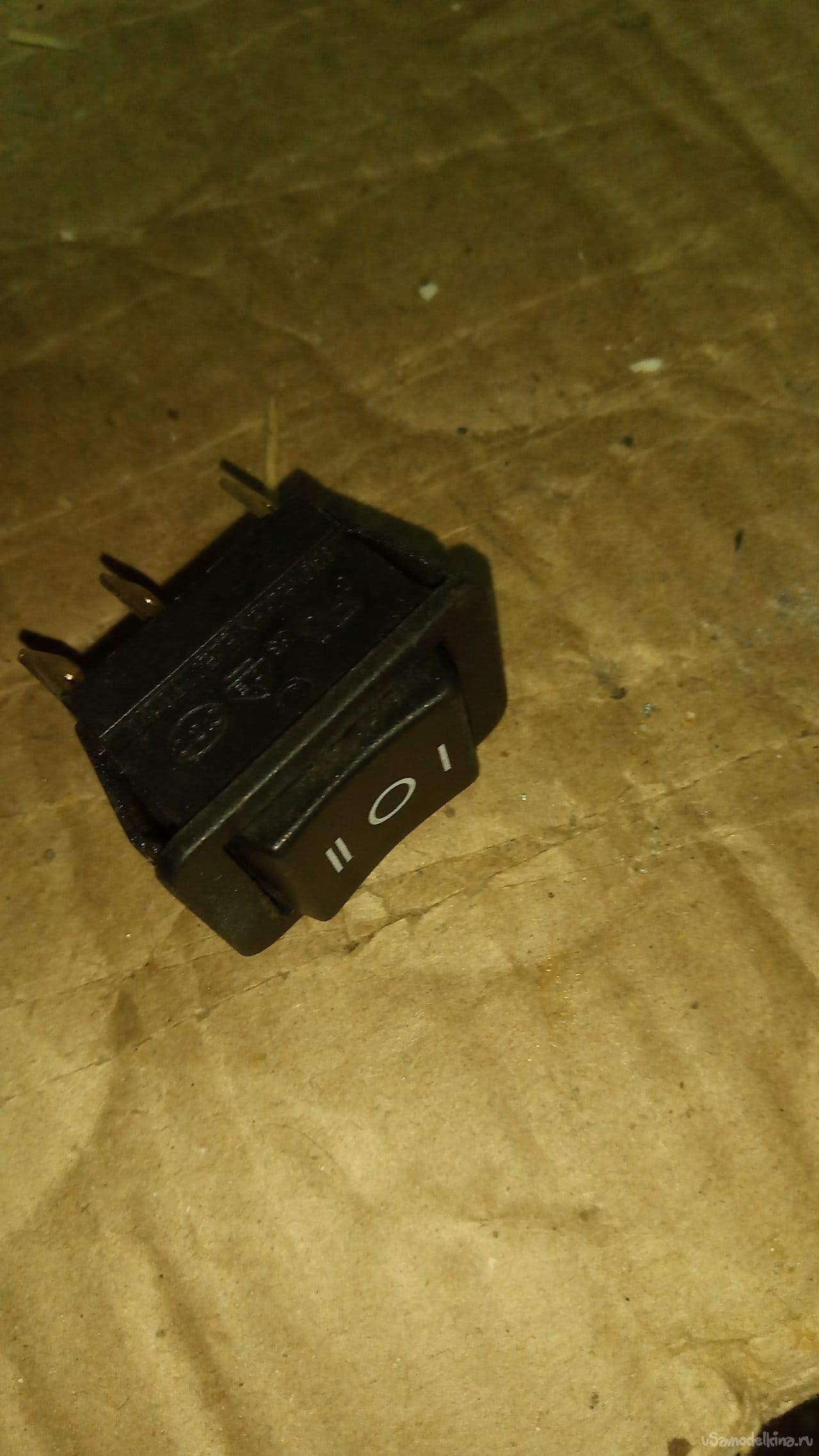 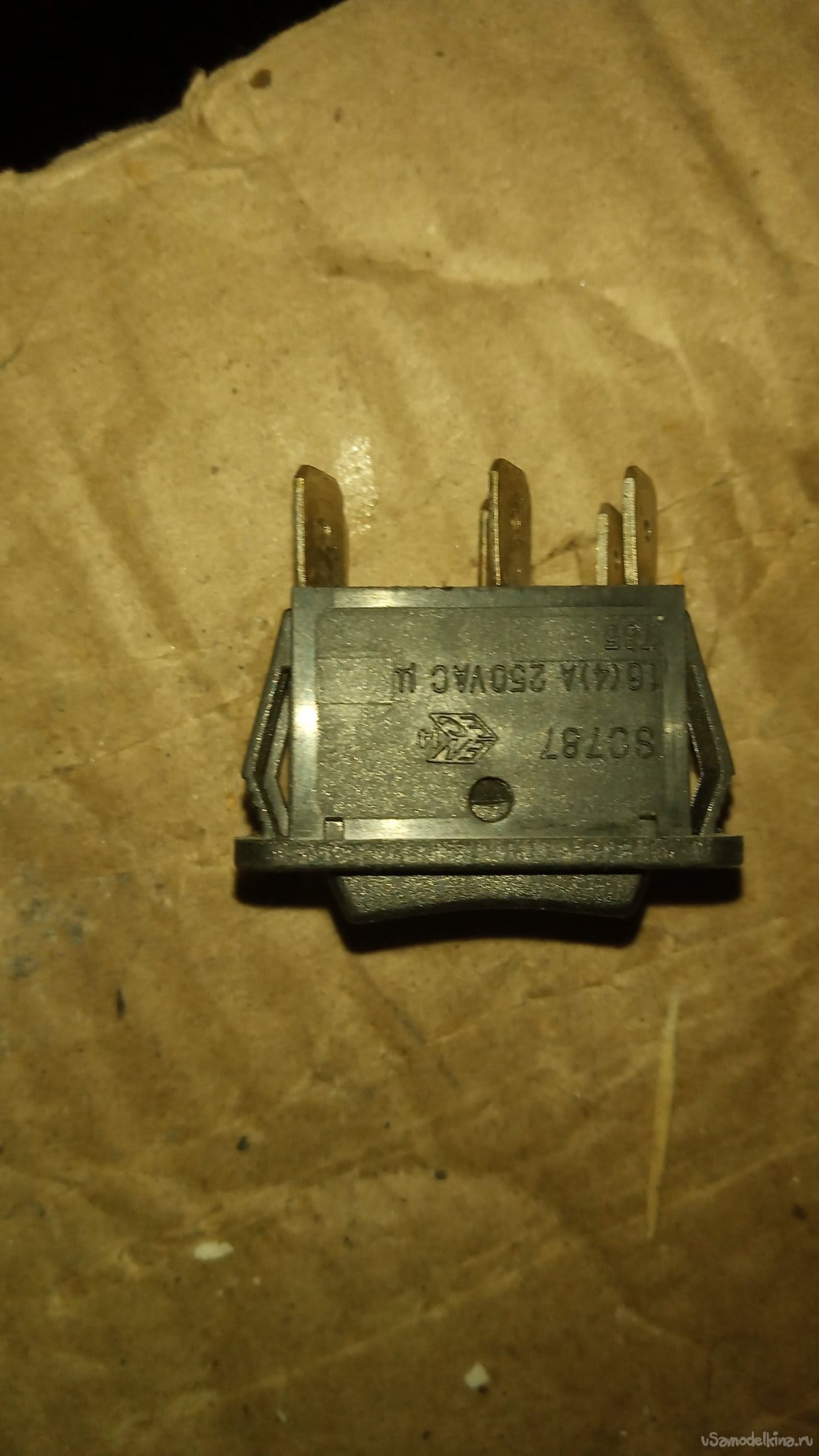 Somehow so quickly” drew “this scheme: 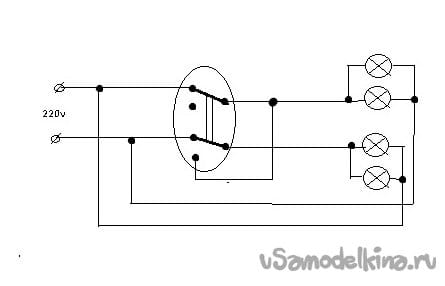 That is, I have already culturally redrawn it in the “paint” from a piece of paper))). And then he threw it with a pencil with sketches and corrections …)))))
(By the way, about the circuit itself. Somehow “I took it, drew it, put it together and works” … But something is turning in my head, which could have been simpler! … But I don’t want to think … So, you can I will listen with pleasure …
Do not suggest PS Arduino!
The toggle switch was not included in the hole from the old one, so I had to widen it with a knife: 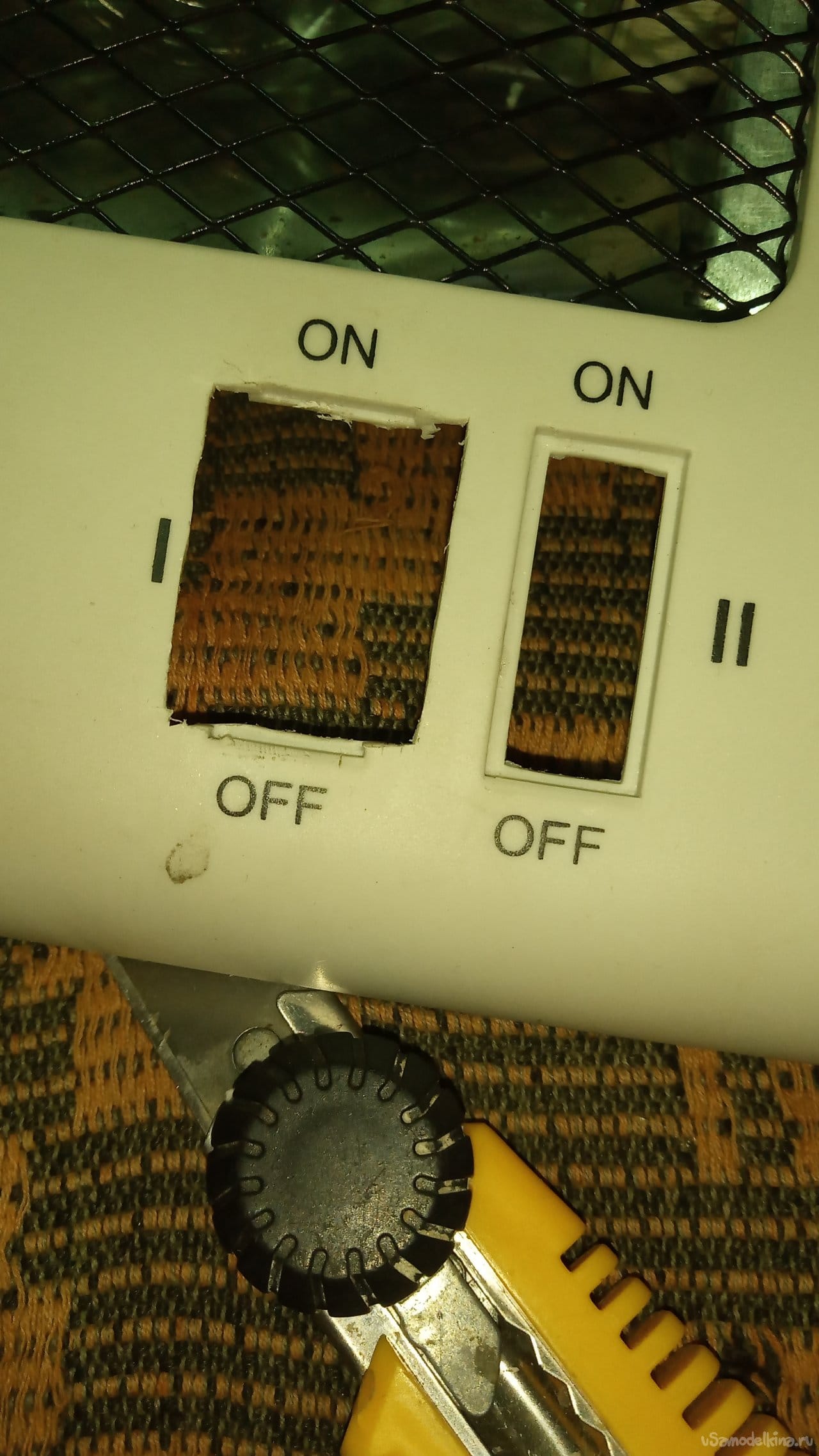 Now included .. . And second? If this new one was in two positions, it would be possible to suspend the general inclusion on the second one, leaving only the mode switching on the new one. But, since the new one already has an “off” position, the old one is simply not needed! Let it just close the hole!))))
Now it's time to commute. There was a piece of RKGM wire, and, although this is not a full-fledged heater, it will not be very hot, but I decided to dilute it with them! I really didn't want to solder something. Therefore, I used the following crimp terminals: 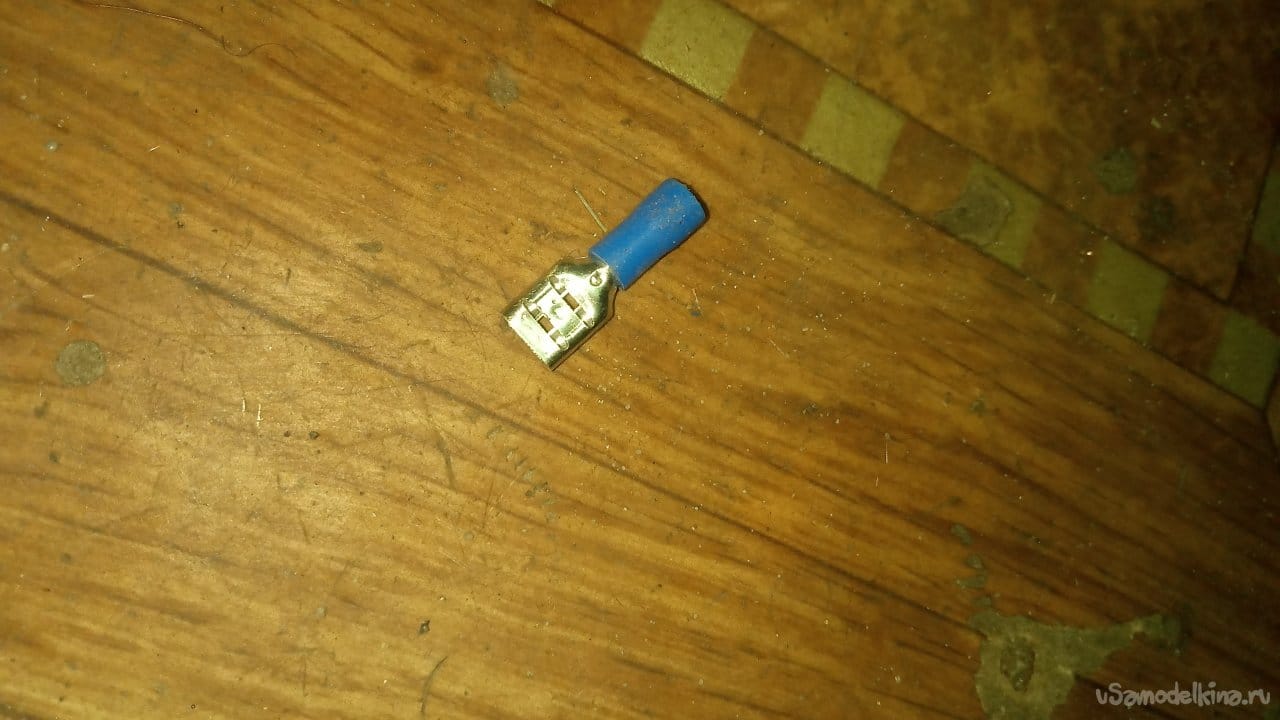 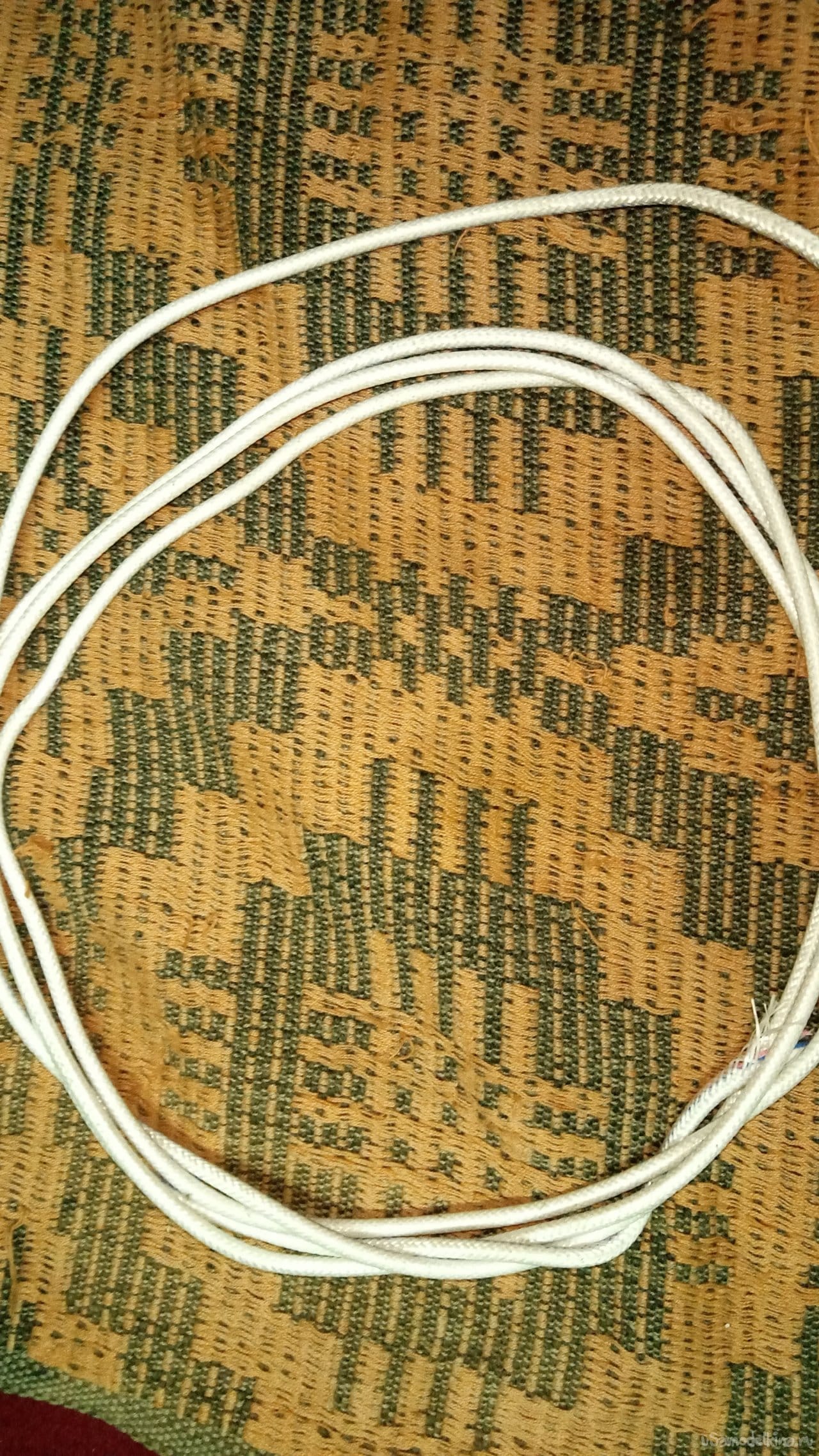 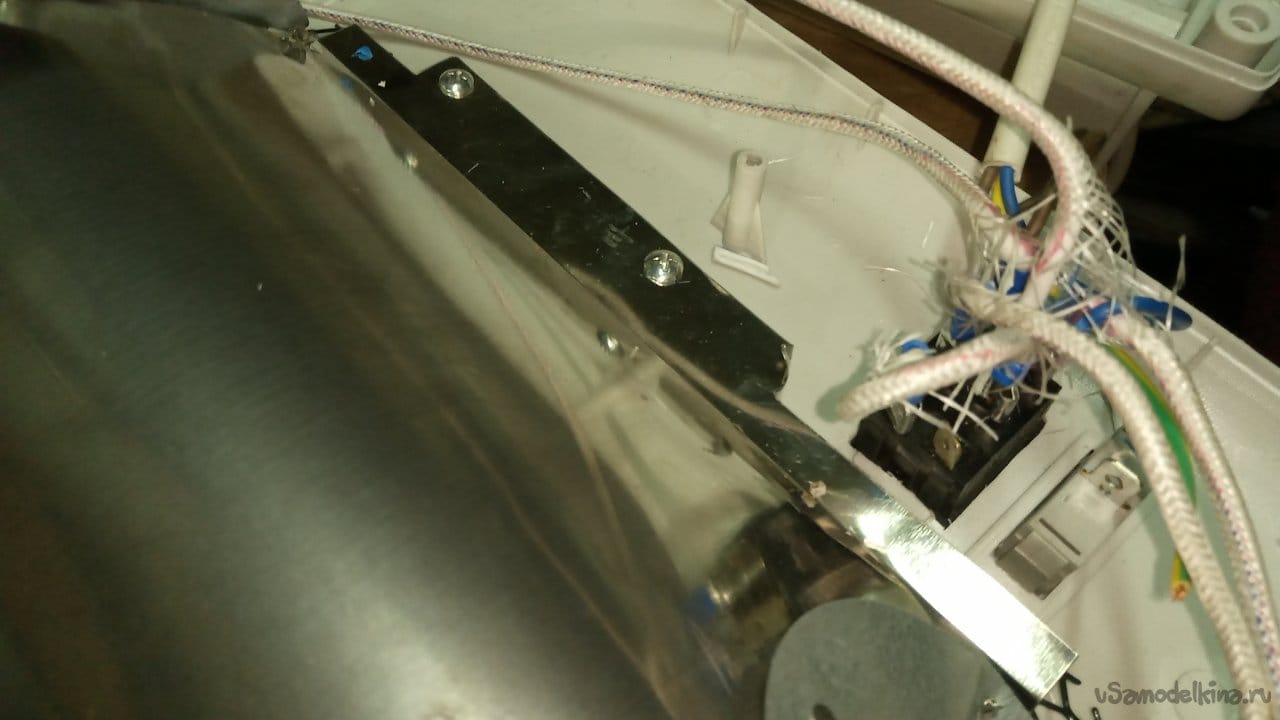 And then an incident occurred … It was already, however, quite late, and I was tired after a hard day at work, but … I made mistake after mistake, connected the wrong wires and not to that … In short, ” I caught the wedge “.)))) Fortunately, I always check thoroughly before turning on. Stupidly running my fingers along the wire and speaking out loud (!) … And every time I found a “joint” … I don't know what it was, but in the end, after I put it together, “it seems to be right.” …. “Yes, no-eh !!! … Well, definitely already correct! …” … I was afraid to turn it on !!! Gone to sleep !!!
And in the morning I looked … Everything is true, right. Included …. Works! 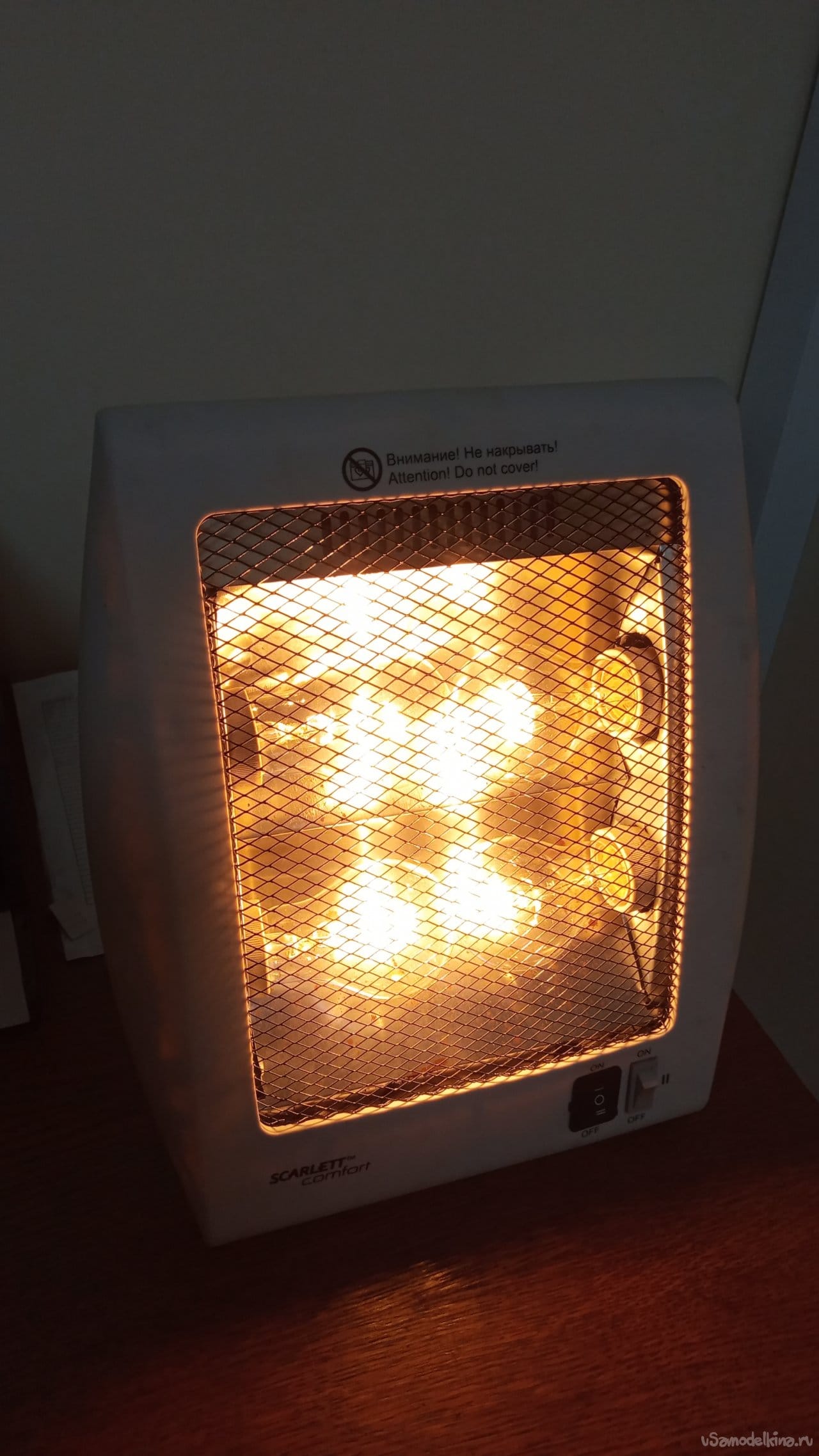 Well, what can I say? … Of course, I would like more power! But, due to the fact that almost all miserable three hundred watts are transmitted precisely by means of thermal radiation, the heat is felt quite strongly when the hands approach ten to fifteen centimeters! And the warmth is so … pleasant, or something … Like a fire! When switched to spotlight mode, of course, it is noticeably warmer! But he then eats twice as much!
(Sorry, there is no picture in this mode! Simply, it was not possible to take a picture so that it was clear what it was.)))). The picture shows a spot of bright light.))) The body is not visible …
I decided not to insert it into the article. But in the “hand-warming mode” it turns out well in the photo)))): 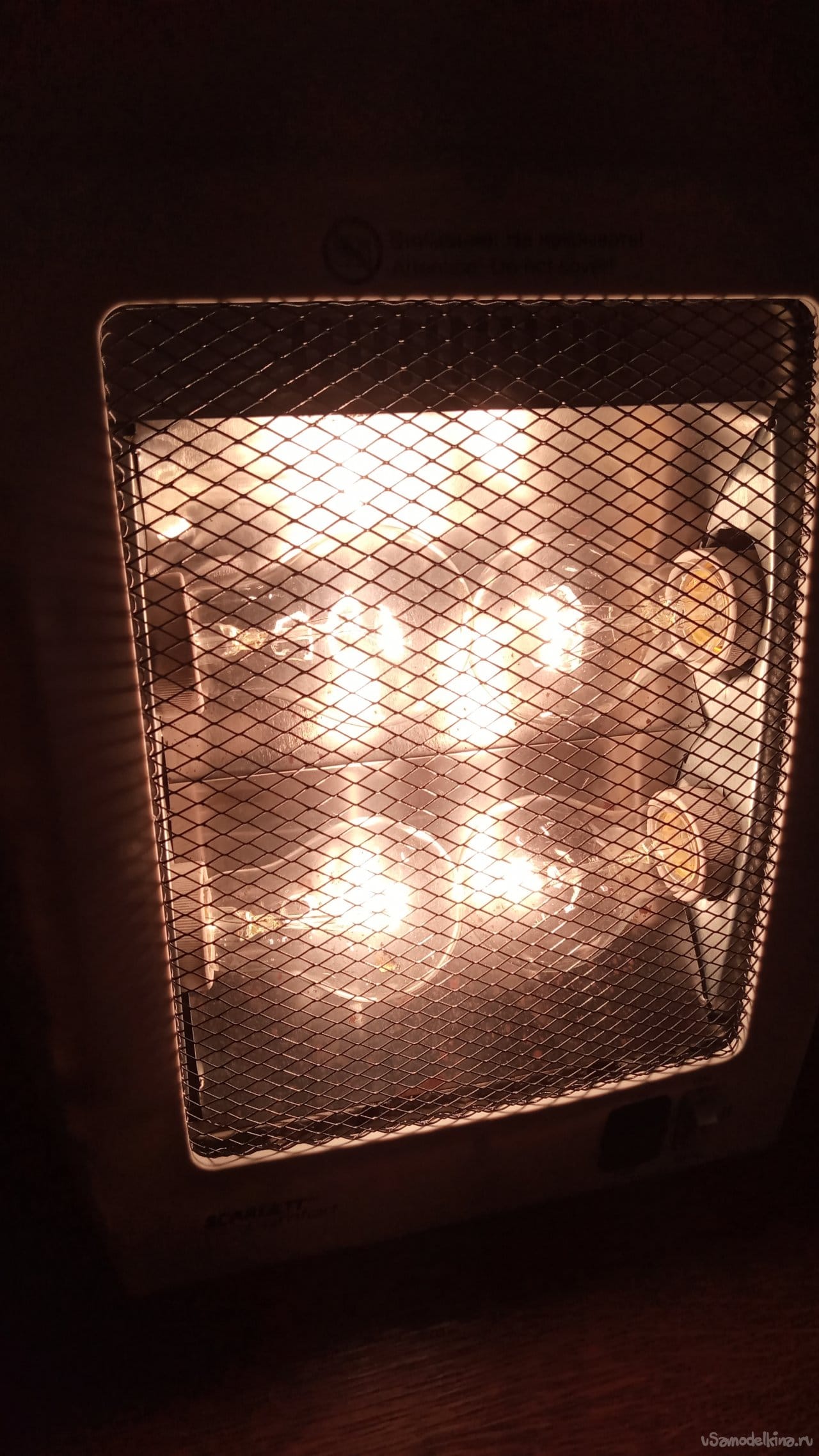 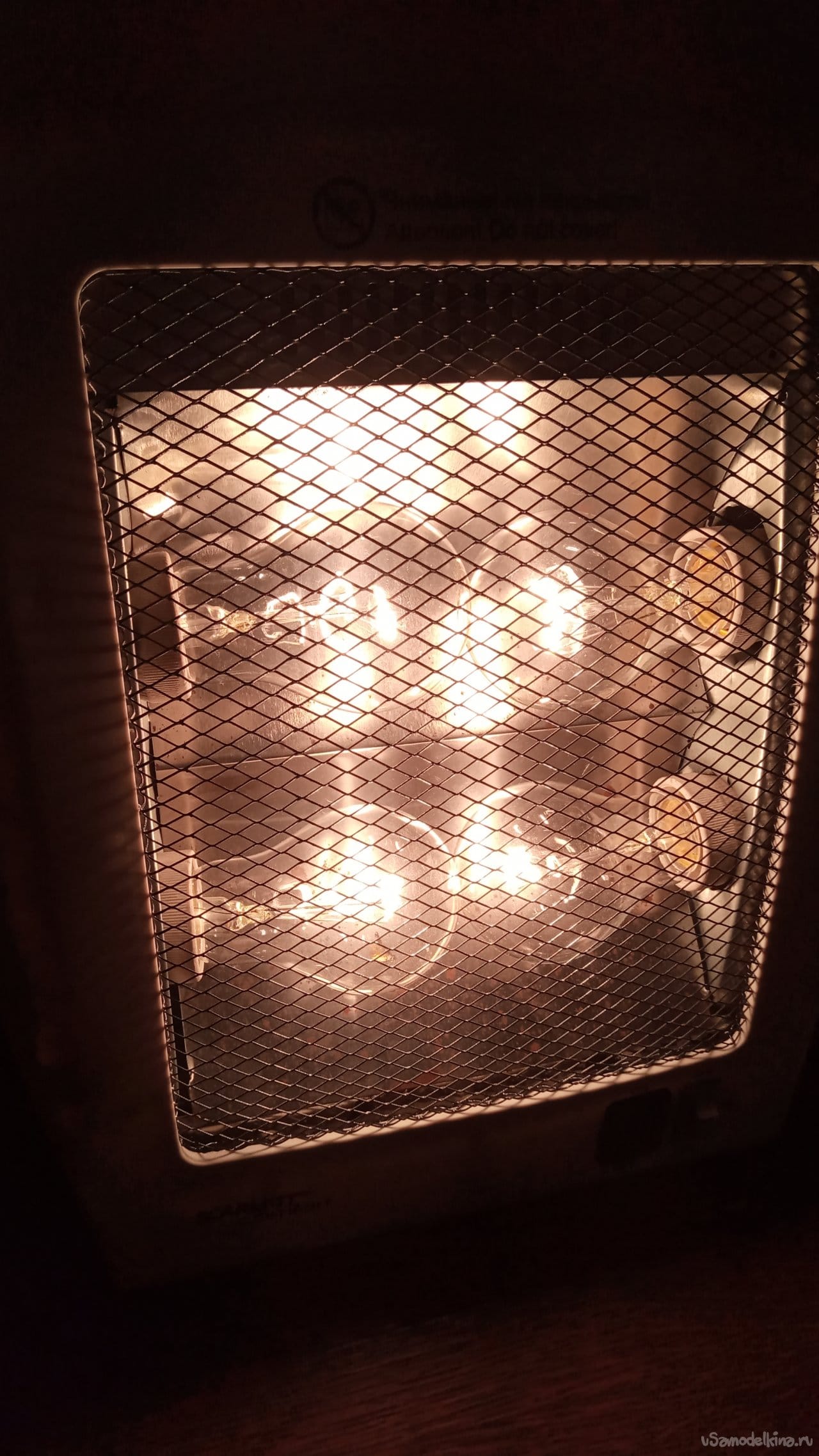 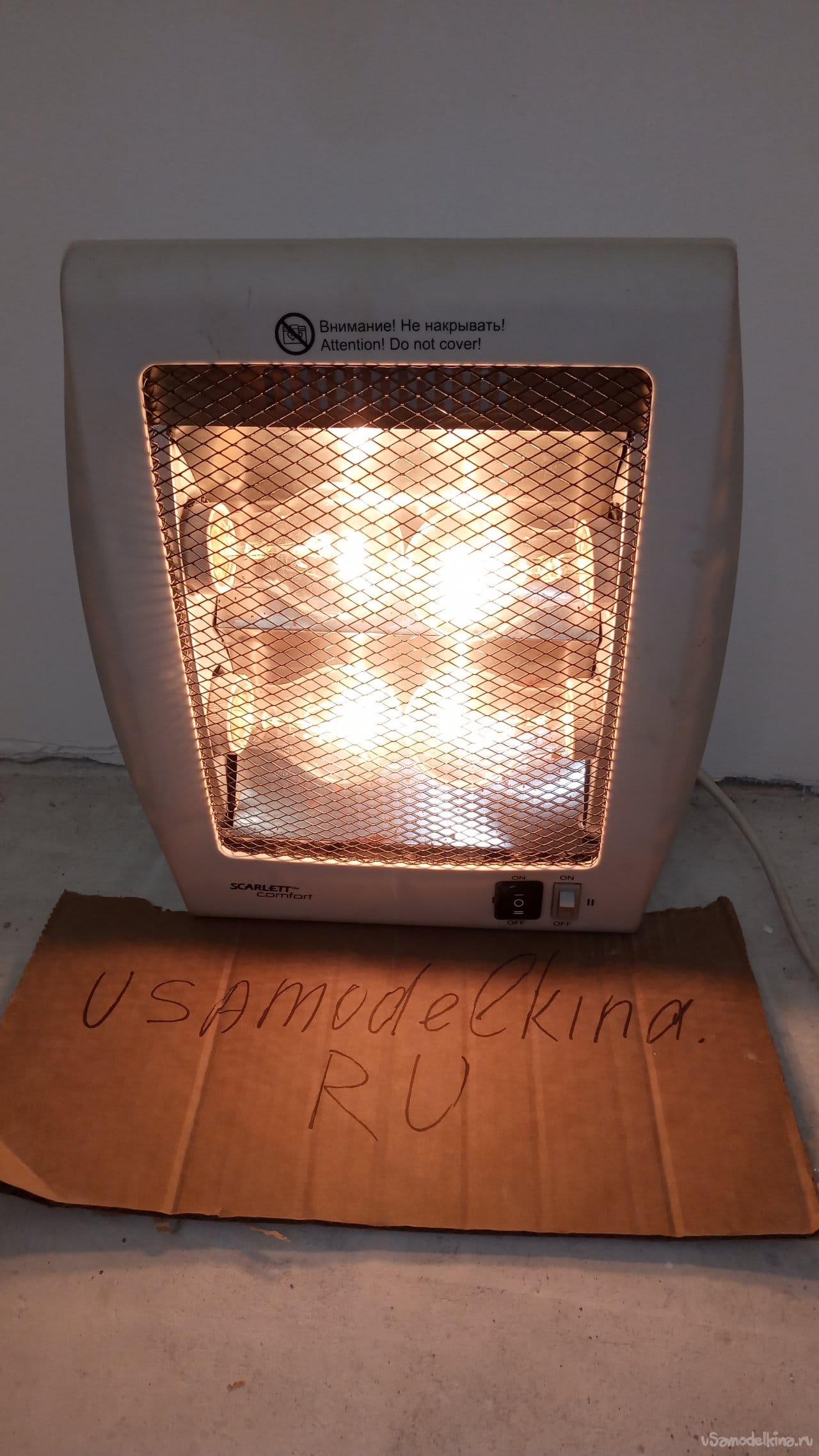 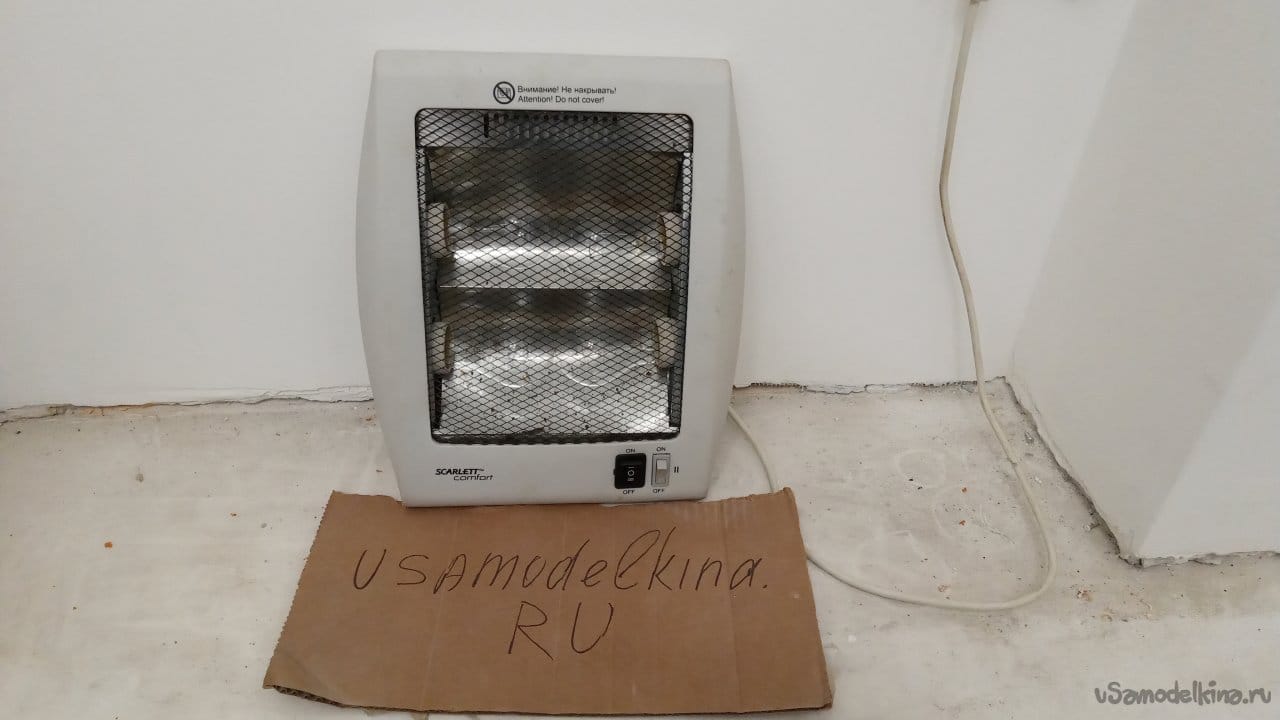 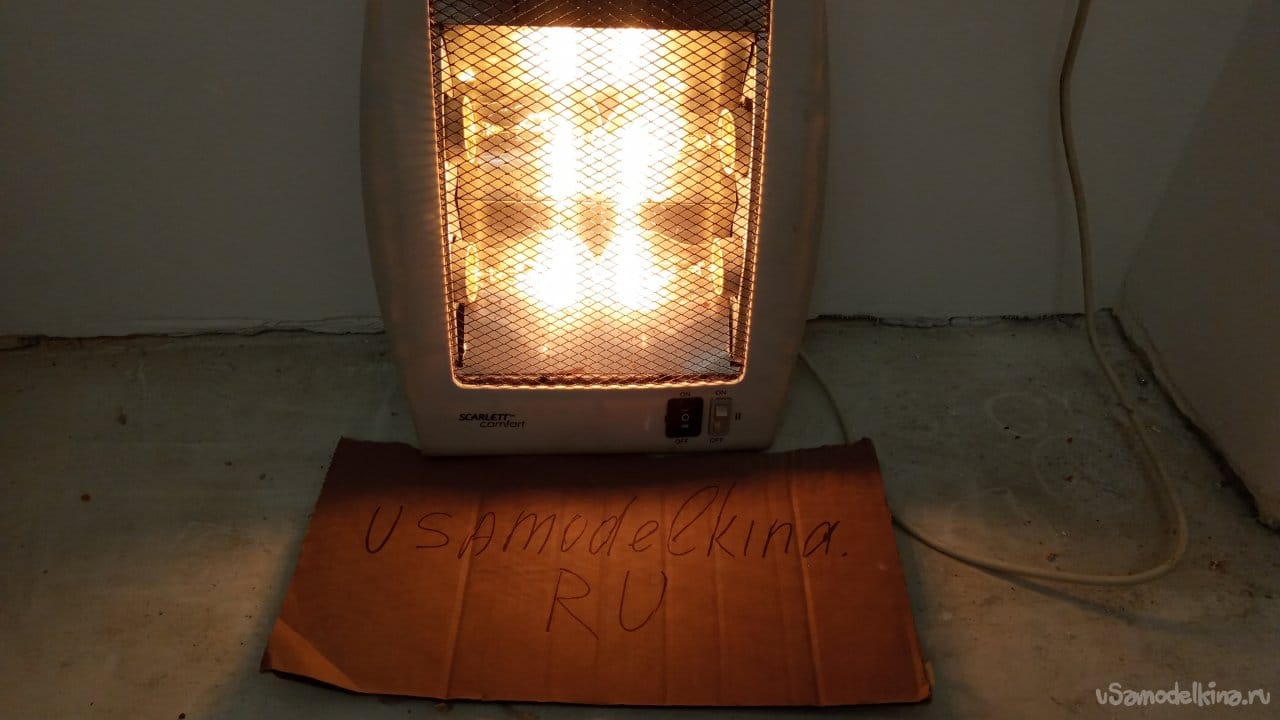 As a matter of fact, what he wanted was what he got! It is very possible to warm your hands. It is especially good that there is practically no need to wait for warming up – turned it on, and it heats up right away.
Again, you can use it to dry painted or glued materials. Well, as a powerful light source, too, I think it will come in handy!