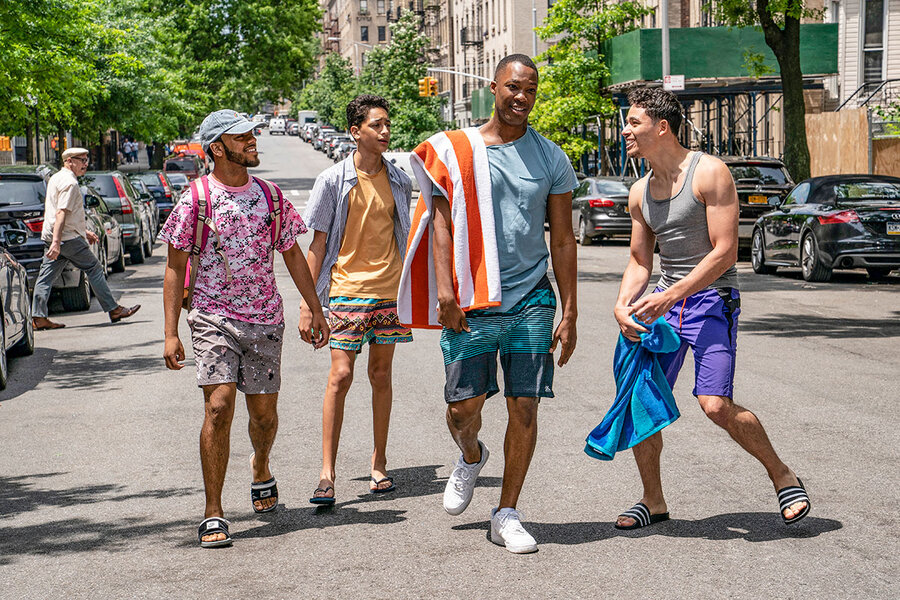 Despite distanced seats and masked faces, my local theater this week was electrifying.

The latest musical to make the trip over to the big screen is “In the Heights.” The adaptation is the work of Lin-Manuel Miranda, who recruited his “Hamilton” breakout star Anthony Ramos to play a dreamer named Usnavi. While “In the Heights” was released on HBO Max June 10, for many Americans, the musical is a thrilling chance to return to movie theaters.

In the film, Usnavi sets his sights for his homeland, the Dominican Republic, insistent on fixing his late father’s bar, which was destroyed in a hurricane. However, he discovers that his current home still needs support.

Like many Americans, our culture writers have longed to get back into theaters. The new Lin-Manuel Miranda musical, “In the Heights,” offered a chance for two of them to compare notes on what film has to say about this moment. Spoiler alert: They say the movie offers a dazzling reminder of the purpose of art during times of darkness.

Nina Rosario (Leslie Grace) returns home after being racially profiled in her first year at college. She finds her father (Jimmy Smits) struggling to pay her tuition and wrestling with the difficult decision of whether to sell his business as wealthy white business owners begin taking over the neighborhood.

Through vibrant song and dance, the film celebrates the Latin cultures prevalent in New York City’s Washington Heights neighborhood. The movie counts down to a power outage that threatens to exhaust a community already struggling to resist economic and social strains.

Around the film’s halfway point, in the song “Blackout,” Usnavi’s Abuela Claudia (Olga Merediz) belts, “We are powerless, we are powerless” – referring to their lack of electricity, but also, metaphorically, to the fragility of their realities. As the U.S. recovers from the pandemic, one that exposed Hispanic communities to disproportionate unemployment and mortality rates, “In the Heights” sheds more light on challenges facing vulnerable communities.

The film paints a magnificent portrait depicting overlooked realities for American immigrants. While “In the Heights” definitely shows the tragedies that often beset urban communities, it is not, by any means, a tragic tale.

As America slowly reopens art spaces and theaters across the country, “In the Heights” is a dazzling reminder about the purpose of art in times of darkness. During the film’s blackout, while many were scrambling to seek refuge, others used fireworks to light up the sky.

In a subsequent number, flags from the various cultures that embroider Washington Heights proudly decorate the scene as residents sing until their power is restored. In this way, joy becomes our country’s strongest illuminant.

At the end of the film, audience members rose to offer a standing ovation, clapping and cheering as if it really were a live performance. In a country struggling with economic and social blackout, “In the Heights” shines light. (4 out of 5 stars) – Tyler Bey, Staff writer

If you leave home, can you find belonging?

At one point during the musical “In the Heights,” a crowd in a public swimming pool spontaneously breaks into an aquatic song-and-dance number. It’s like the water ballet scene in Busby Berkeley’s “Footlight Parade” but with the scale of an Olympic Games opening ceremony.

The sequence exemplifies how movie musicals are, by nature, larger than life. The marvel of “In the Heights” is that it also feels true to life.

Set in New York City’s gentrifying neighborhood of Washington Heights, it’s a story about defining one’s identity during major life changes. Young bodega owner Usnavi (Anthony Ramos) dreams of returning to the Dominican Republic. His young helper, Sonny (Gregory Diaz IV), has ambitions of going to college, but doing so would risk exposing his status – or lack thereof – as an unauthorized immigrant. That’s weighing on Usnavi’s conscience. The bodega owner also wishes to woo Vanessa (Melissa Barrera), a hair-salon employee who wants to launch a fashion boutique downtown. Meanwhile, the two owners of the salon – the social hub for gossip on the block – have decided to relocate their business to the Bronx. They worry that their regular customers won’t follow them. All the characters in this immigrant community are torn about uprooting their lives so that they, or their loved ones, can branch out. If you leave your home, can you find belonging in the world?

Much like Spike Lee’s seminal urban drama “Do the Right Thing,” the events take place during a heat wave. It’s sweltering from the get-go. The predominantly Latino denizens hang up laundry, turn fire hydrants into spigots, and pry limpets of chewing gum from the soles of their shoes. Director Jon M. Chu (“Crazy Rich Asians”) uses these naturalistic vignettes as a counterbalance to the choreographed musical sequences. His movie stays grounded even when the characters don’t – in one enchanting scene, a couple defies gravity by dancing on the vertical wall of a building.

“In the Heights” arrives with hyped expectations because its creator is Lin-Manuel Miranda. (Confession: I haven’t seen “Hamilton” because I didn’t want to take out a mortgage for the theater tickets. I’m banking on seeing it when it finally arrives on the high-school drama circuit, so probably sometime around 2041.) Miranda, who has a cameo appearance as a street merchant, showcases his renown for rap-influenced conversational lyrics as a proxy for dialogue. His hummable show tunes draw from everything from bossa nova to calypso music to hip-hop. The rhythms are Latin; the beats come from the heart. Miranda’s character-based story culminates with a twist that illustrates that home isn’t a locale, it’s a state of consciousness.

“In the Heights” is getting a simultaneous release on HBO Max. But I wouldn’t trade the communal experience of seeing this in a theater for convenience of staying at home. After a pandemic in which viewers have become so accustomed to the small screen, Chu’s inventive, energetic, and joyous motion picture is a timely reminder of what “cinematic” truly means.

“In the Heights” is not only larger than life, it’s also life-affirming. (5 out of 5 stars) – Stephen Humphries, Staff writer