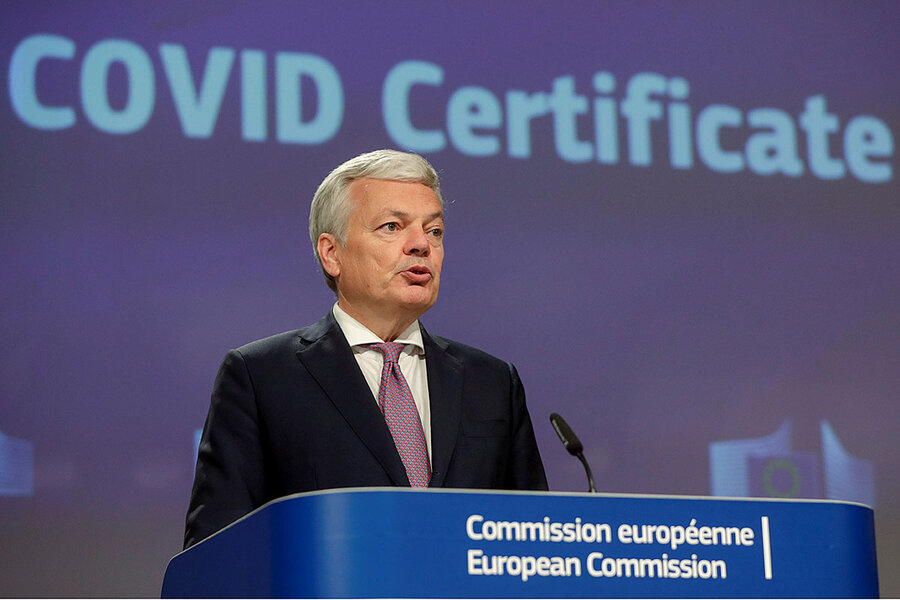 Back in 1992, Yiannis Klouvas converted an old cinema into the Blue Lagoon restaurant, which garnered a strong reputation for live music. There is no music now. The business, like so many others on the Greek island of Rhodes, is struggling due to the pandemic’s restrictions on travel.

“If we see a tourist on the street these days,” he says, “we take a photo to remember them.”

Mr. Klouvas is now banking on the EU Digital COVID Certificate, also known as the “green passport,” to save the summer. Starting July 1, all EU member states will accept the certificates as proof of COVID-19 vaccination, a recent negative test, or recovery from the disease. The plan got a resounding yes at the European Parliament on June 9. All EU member states, Liechtenstein, and Norway will implement the passport.

Coronavirus passes could become the new normal in Europe, even as the U.S. balks at the idea. The difference comes down to circumstances and values – and will shape post-pandemic global mobility.

But across the Atlantic, the idea faces strong head winds, whether for travel or domestic use. The Biden administration has ruled out introducing vaccination passports, and some states even ban them. Fox News talk show host Tucker Carlson likened the use of them to segregation. “Medical Jim Crow has come to America,” he said.

Prioritizing freedom and fears of government overreach underpin the rejection of vaccine certificates in the U.S., while European societies have grappled more with issues of privacy and fairness. And so as Western countries savor a return to the old, this phase of post-pandemic mobility is being shaped by cultural attitudes – like Europeans’ tendency to make the most of having entirely different cultures within a few hours’ drive – and the initial responses to the pandemic.

“Alabama never closed the border to Mississippi in the way Finland closed the border to Sweden,” points out Anders Herlitz, a researcher at Sweden’s Institute for Futures Studies. “Here in the EU, the vaccine passports are seen as a necessary evil to get rid of other, much more extensive, limitations to people’s freedom, whereas in the U.S., they would not help getting rid of other limitations, but only cause new limitations.”

“One thing we know from how COVID has played out globally is that culture matters,” she says.  “Politics, culture, all the differences that we know that structure people’s lives have to be taken into account, both for getting back to normal and for preparing for the next pandemic.”

Nine European countries, including Greece and Germany, are already using the EU COVID-19 passport. When the Greek government unveiled the passport, Prime Minister Kyriakos Mitsotakis trumpeted the opening of a “fast lane” to facilitate travel.” Everyone realizes two years without tourists would be an economic disaster for the Mediterranean nation.

“Greece is very strongly pro-vaccine passport, especially as far as foreigners are concerned,” says Paris Kyriacopolous, chairman of Motodynamics and Lion Rental, which operates Sixt Rent a Car in Greece.

Ipsos polling data suggests the dominant attitude toward COVID-19 vaccine passports across Europe is equally positive. When it comes to using them domestically, citizens are more concerned by questions of fairness than by privacy issues, and pockets of society are ambivalent about or opposed to vaccines. But when it comes to travel, the view is clearly pro.

Even Germany, which had more rigorous ethical debates on the issues and boasts stringent data privacy laws, got behind the idea of digital health certificates. More than 60% of Germans now support implementing them, according to a recent YouGov poll, even though less than half the population has had a first jab.

Malcolm Jorgensen, an academic who is providing administrative assistance at one of Berlin’s six vaccination centers, is fully vaccinated as of this week. His vaccination card has allowed him to shop at markets and visit the gym without flashing a coronavirus test result. He says the move from a paper card to a digital passport isn’t much of a leap.

“There’s already informal digitization,” says Dr. Jorgensen. “At the gym I can just show a photograph of my vaccination booklet, rather than the booklet itself. Digitization is inevitable.”

In Germany, debates over the passports have had less to do with privacy concerns than with equity of access for people who choose not to or cannot be vaccinated. Analysts note that medical insurance companies already have individuals’ health details.

“It’s an ethical question,” says Olga Stepanova, a data protection attorney with WINHELLER Law. “Each government needs to decide what kinds of access limitations may be imposed to protect others, while not limiting freedoms of non-vaccinated people in an inappropriate way.”

The freedom debate has been particularly fierce in the U.S. Much like other issues throughout the pandemic, the vaccine certificate has become deeply polarizing.

The divisions fall along partisan lines – just as they did with stay-at-home orders and mask mandates – and so different states have moved toward normalcy in distinct ways. New York was the first to introduce its Excelsior Pass, which allows residents to prove their vaccination status to gain access to certain social venues. But several states, including Florida and Texas, ban such passes outright.

The state of Michigan has been one of the most closely watched during the last year, ever since former President Donald Trump notoriously tweeted “Liberate Michigan” last spring in regard to tough anti-lockdown measures implemented by Democratic Gov. Gretchen Whitmer. This spring, as the state coped with one of the worst spikes of COVID-19, a bitter debate over vaccine passports broke out.

This month the Michigan House approved legislation to ban so-called vaccine passports in the state – even though the governor has  repeatedly said she has no intention of introducing them. “The threat of government controlling one’s daily life through identification of whether one is immunized or not is frightening,” said Rep. Sue Allor, who proposed the bill.

Like the rest of the country, the state is divided. The University of Michigan has mandated that students living in dormitories must prove vaccination. Since Michigan is a border state, some Democrats have pushed for passes as a way to travel more easily to Canada and avoid quarantines.

Dave Boucher, a government and politics reporter with the Detroit Free Press, says opposition centers around freedom of choice. It’s about “the government ‘telling me what I can and can’t do,’” he says. “And there’s always the slippery slope argument where if the government is endorsing vaccine passports now, then they’re going to get vital information about you and track that information and use it in unknown, nefarious ways.”

Rich Studley, president and CEO of the Michigan Chamber of Commerce, says the vast majority of his members are committed to a safe reopening and return to normal, but don’t see passports as a way to do it.

“There is no groundswell of support that would be in favor of mandatory vaccines and vaccine passports,” he says. “If there is one thing businesses have learned over the past year in Michigan, other than how to survive, it is how to operate their business safely to protect employees and customers.”

In general, Americans – much like Europeans – are more accepting of passports to travel than they are for domestic use, according to polls. Some analysts believe they are an inevitable part of post-pandemic mobility.

“Digital health certificates are already available in the EU, and my guess is that they will be widely used, even without being adopted by the U.S.,” says Chris Dye, a professor of epidemiology at Oxford University in Britain.