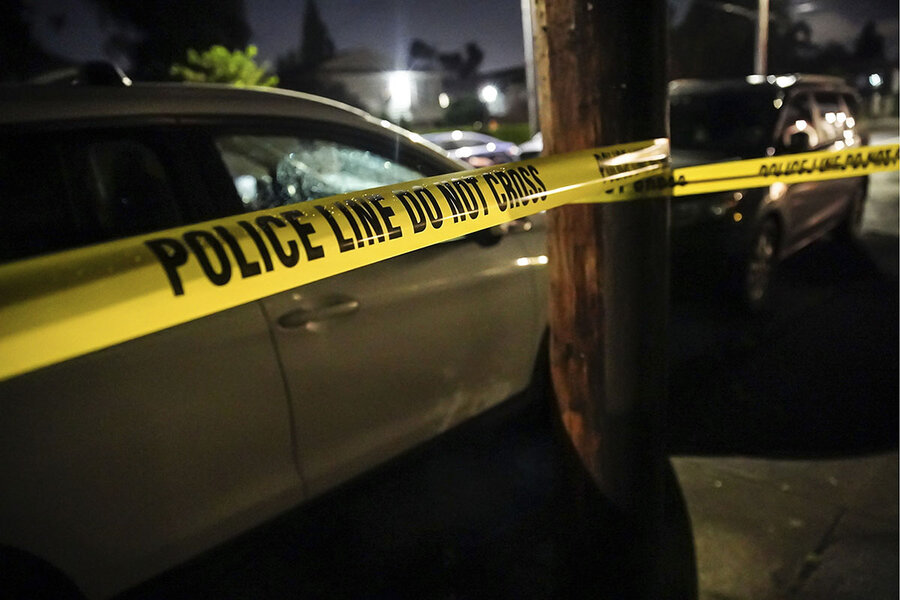 “Community gun violence – which is really what’s driving this trend – is not the intractable challenge that people think it is,” says Thomas Abt, director of the National Commission on COVID-19 and Criminal Justice at the Council on Criminal Justice. “In fact, we’ve had success in reducing this kind of violence many times and in many places all around the country. The challenge has been sustaining that success.”

Are we seeing a return to 1990s-level violence?

In absolute numbers, the level of gun violence remains far below its peak in the early 1990s – after which shootings plummeted across the United States until 2014, when numbers gradually began ticking up.

There’s no universally agreed-upon explanation for the decadeslong drop in violence. Nor is there a clear causal story for the spike last year. Likely at fault, though, are the pandemic and social unrest in response to police brutality.

Institutions like churches, schools, and places of business all help reduce violence by keeping people off the streets and connected to their communities, says Elizabeth Glazer, former director of the New York City Mayor’s Office of Criminal Justice. When those structures collapse, “it aggravates the sense of estrangement and inequality and gives rise to the conditions that create violence,” she says.

Citizens who feel alienated from the police, for example, may choose to protect themselves not by contacting law enforcement but by buying a firearm – as Americans have done in record numbers since last year.

“It’s not that a virus causes shootings,” says Jeffrey Butts, director of the Research and Evaluation Center at John Jay College of Criminal Justice, City University of New York. “It’s that the virus caused the economic disruption and cultural shutdown, which in America resulted in shootings.”

Will everything go back to normal after the pandemic?

While the pandemic’s severity has waned in the U.S. and last year’s protests have tapered off, a return to the mean isn’t inevitable.

“There were a set of factors that likely came together to create this surge of violence last year, but when those factors go away, it doesn’t necessarily mean that violence will revert back to the level that we were at in 2019,” says Professor Sharkey.

For one, shootings tend to increase in the summer, making an immediate drop unlikely. Violence also tends to build on itself, says Professor Sharkey, meaning every shooting makes another shooting more likely.

The aftermath of last year’s Black Lives Matter protests and defund the police movement also is a complication.

Police have helped keep streets safer, but they come with high fiscal and social costs, says Professor Sharkey. But without comprehensive reform, he says, it can also make cities less safe to have “police stepping back without a set of institutions that can step in.”

What are the solutions?

Most people agree that sustainable progress requires a robust policy response, but consensus ends at the kind of response necessary. The discourse around public safety has largely devolved into a false either-or choice of supporting or opposing the police, says Ms. Glazer. But effective policies don’t fit cleanly into left- or right-wing platforms.

“We’ve gotten used to kind of equating safety with police and so that’s our first instinct,” says Ms. Glazer. “We really have to begin to have a more integrated strategy of which police are a part.”