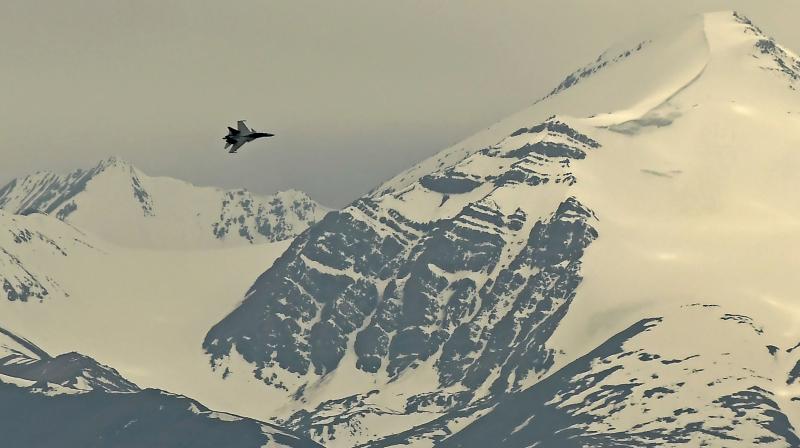 New Delhi: Around 24 Chinese fighter jets, including J-11s and J-16s, recently held exercises near eastern Ladakh amid the heavy deployment of forces on the ground at the Line of Actual Control (LAC) by both countries. The exercises come when both sides have been engaged in a military standoff for over a year now at the LAC in Ladakh.

Reports said that several Chinese airbases, including Hotan, Gar Gunsa and Kashgar, were used for these exercises. The use of these bases is significant as they were used to support the People’s Liberation Army’s incursions into Ladakh last year. All these bases have been upgraded to carry out operations by all types of Chinese fighter aircraft. Besides these, four other bases — Shigatse, Lhasa Gongkar, Nyingchi and Chamdo Pangta — were also used. All seven bases are located in Tibet and Xinjiang.

While none of the Chinese warplanes crossed over into Indian airspace, the Indian Air Force remained on high alert and closely watched the Chinese exercises. The Indian security agencies also kept a close watch, with the help of satellites and other forms of surveillance.

China has already deployed its air defence system, including HQ-9 and HQ-16, in the sector, which can target aircraft at long range.

India has also deployed air defence missiles, including the Akash missile system, which can take down fast-moving combat aircraft and drones in a few seconds.

The IAF’s Rafale fighters also conduct sorties over Ladakh in a boost to Indian capabilities all along the LAC. The IAF now has 24 Rafales, which are armed with the most advanced beyond visual range Meteor air-to-air missiles with a range of upto 150 km and can hit intruding aircraft.

The Indian Air Force has a geographical advantage over the PLA Air Force in Ladakh as the Chinese jets have to fly and take off from very high altitudes, while the Indian warplanes can take off from the plains and reach the mountainous region swiftly. Since the air is thin at those heights, the Chinese jets are forced to carry a lighter load, which affects their operational capabilities.