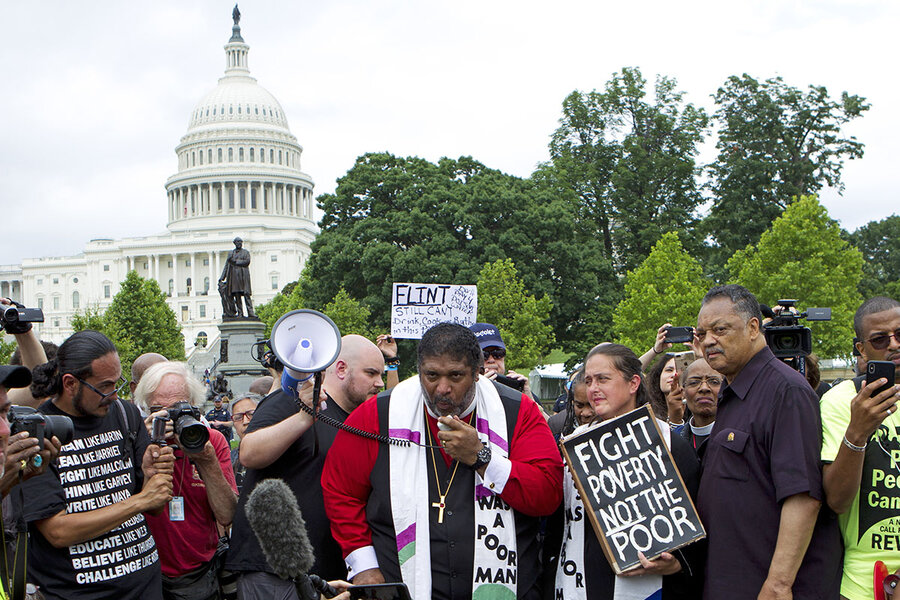 The 19-page document is not a bill; it is “the road map,” Dr. Barber says in an interview, “calling us to the resolve to make sure the resolution is turned into real policies.”

The post-Civil War Reconstruction was followed by Jim Crow segregation, leaving the second period of reconstruction during the civil rights movement to try to redo what had been started, says Michael Honey, professor of humanities at the University of Washington Tacoma.

Now, with the Supreme Court’s 2013 nullification of major parts of the 1965 Voting Rights Act (VRA), and stringent voting laws now being proposed and passed by state legislatures, the analogy of a third reconstruction is “a pretty good one,” says Dr. Honey, author of “To the Promised Land: Martin Luther King and the Fight for Economic Justice.”

It also comes at a time when new voting rights legislation has been stymied in the Senate, with a Supreme Court ruling expected before the end of this month that experts believe will erode the VRA further, and after a pandemic in which Black Americans both died at greater rates and disproportionately experienced the economic pain of lockdowns.

“Glad to see them take up the mantle”

Martin Luther King Jr. once called racism, poverty, and war the “three major evils.” Dr. Barber and Dr. Theoharis pick up where King’s campaign left off, purposely making the link explicit. King announced his Poor People’s Campaign on Dec. 4, 1967; the reverends announced theirs on Dec. 4, 2017. Next, the reverends conducted an audit of America that looked at the 50 years since the original campaign assembled on the National Mall in May and June of 1968, just weeks after King’s assassination. The audit quantifies the condition of America’s poor people and identifies myths about poverty, such as that poverty is the fault of poor people.

“I was glad to see them take up the mantle,” says Dr. Bernard LaFayette Jr., the national coordinator for the original Poor People’s Campaign and a colleague of King’s.

Another veteran of that first campaign and its policy director, Marian Wright Edelman, founder of the Children’s Defense Fund, advised today’s leaders to “build it for the long run.” Heeding that counsel, Dr. Barber says the new campaign is “from the states up” with coordinating committees in 45 states.

Yet, while Dr. Barber expresses gratitude for that first campaign, he says the current one is not necessarily using the 1968 playbook. For example, the new campaign also focuses on environmental justice and the threat of religious nationalism in the U.S., in addition to King’s three evils.

“Every movement draws on the past to some degree,” he says. “Then it has to draw new directions in the particular moment in which it lives.”

In a forced adjustment to this moment in time, both last year’s march on Washington and this year’s, planned for June 21, were virtual. But an in-person Moral March will be held in the home state of Democratic Sen. Joe Manchin of West Virginia on Monday, for his opposition to the For the People Act, which would expand voting rights.

Putting “a face on poverty”

Those prior periods of reconstruction saw significant changes to the Constitution itself, including amendments for the abolition of slavery, birthright citizenship, and suffrage for Black men. During the second reconstruction period, amendments to provide electors to Washington, D.C.; abolish poll taxes; and delineate presidential succession were approved.

“You’ve got to have a prophetic imagination and transformation before you have prophetic implementation of policies,” Dr. Barber says.

Asked if changing the Constitution is a goal of the “Third Reconstruction” resolution, Dr. Barber replies affirmatively, mentioning education as “a right.”

“We have state constitutions where education is a right, and we don’t have education as a right in our federal Constitution,” Dr. Barber says. “We need to think deep and hard about what kind of democracy we claim to be and what we want to be.”

“The problems of poor people are not over,” Dr. LaFayette says. Recalling an early planning meeting for the original Poor People’s Campaign, he says, “Martin Luther King’s purpose, as he expressed it, was to put a face on poverty.”

The echo in Dr. Barber’s words decades later is unmistakable: “We’re going to put a face on these numbers.”