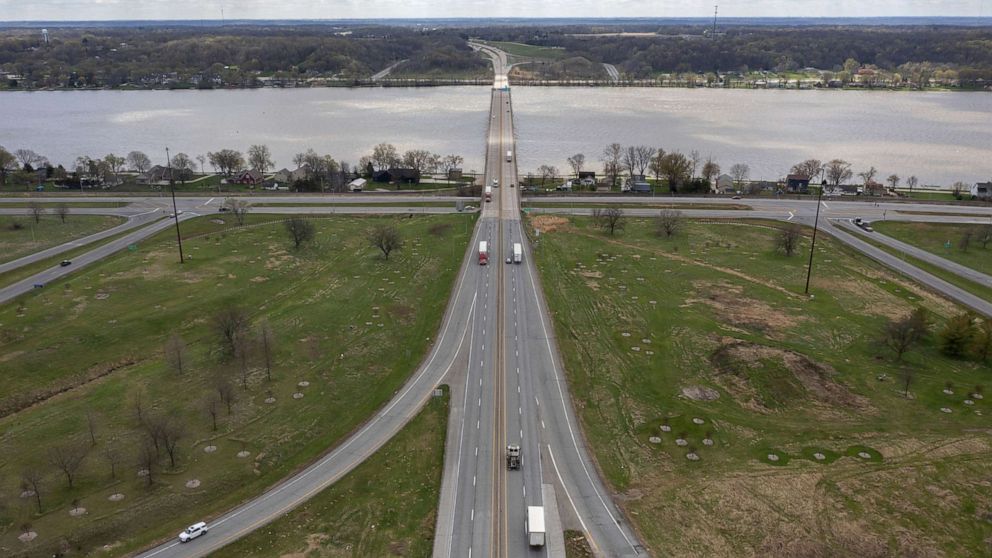 Each day, the Interstate 80 bridge over the Mississippi River connecting Illinois and Iowa carries 36,000 cars. But in the not-too-distant future, it may carry bison.

Transportation officials in both states are studying plans that include possibly replacing the 55-year-old span. But rather than spend millions of taxpayer dollars to tear it down, environmentalist Chad Pregracke of Living Lands and Waters wants to raise private funds to transform the bridge into a unique national park: Bison Bridge.

He wants to turn the westbound lanes into a grassy meadow while the eastbound lanes would become a safely separated pedestrian and bike path that provides close-up views of the iconic animals. The plan calls for introducing a herd of wild bison into the region that could roam the bridge and 100 acres of restored prairie on each side.

“The bison could essentially graze their way over to Iowa and graze their way back to Illinois,” Pregracke told ABC News. A website for the proposed project touts it as the “longest manmade wildlife crossing in the world.”

The word “crazy” has been used to describe the idea, even by Pregracke himself. But his proposal has gained momentum among Quad Cities residents and leaders. Supporters, including Illinois Democratic Rep. Cheri Bustos, whose district includes the bridge, and Paul Rumler, head of the Quad Cities Chamber of Commerce, have said “crazy” is what’s necessary.

Rumler told ABC News that the idea “is crazy enough to be great.” He said his organization believes the bridge would put the Quad Cities on the map both nationally and internationally. “It helps set a unique and differentiating message for our region that will help tell the world that we can think big, be creative and put this really cool project together,” he said.

The resulting boon for bison would be a boost for the region, according to Bustos. “This project will support the local economy, drive tourism to our area and bring families together to take advantage of one of the features that makes the Quad Cities unique – travel along the Mississippi River,” Bustos told ABC News in a statement.

Added Pregracke: “It’s a wild idea, but it has to be. If it was boring, would you ever stop in your car? No. It has to be one of a kind, nothing else like it in the world.”

A bridge for wildlife isn’t itself a unique idea. In fact, 1,200 miles from the I-80 bridge that Pregracke wants to repurpose for bison is a crossing that affords safe passage for wildlife over that same highway. The Parley’s Canyon wildlife overpass that takes moose, elk and other animals over I-80 near Park City, Utah, is one of the nation’s longest wildlife spans at 320 feet.

But at more than half a mile in length, the I-80 bridge over the Mississippi, if it becomes the Bison Bridge, would dwarf other such crossings in the U.S. And unlike many others, it would accommodate people.

Kevin Marchek, project manager for the Bison Bridge and an engineer who worked for the Illinois Department of Transportation for 39 years, sees it as “part of a movement, a grassroots effort, to repurpose existing infrastructure rather than just watch it be demolished.”

Marchek said adapting the bridge for animals, and for people who want to safely admire them, makes more sense than taxpayers spending an estimated $20 million to tear down the old structure.