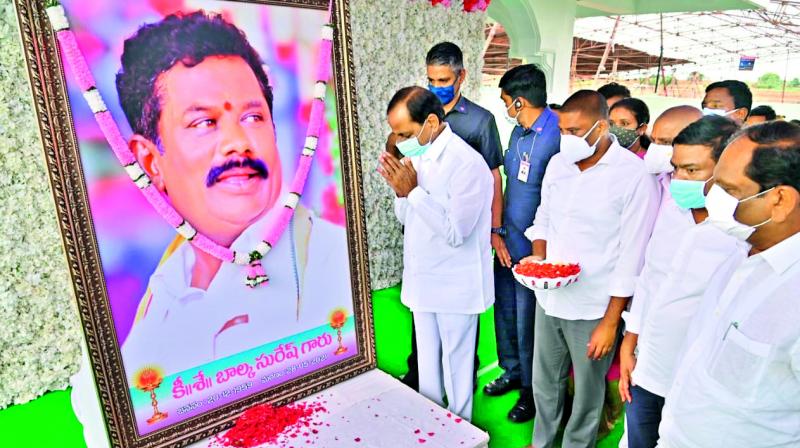 Karimnagar: Chief Minister K Chandrasekhar Rao on Wednesday visited the residence of the Chennur MLA and government whip Balka Suman in Regunta village of Metpally mandal in Jagtial district and paid tributes to the latter’s father who passed away due to Covid-19 recently.

Bulka Suresh (62), father of Suman died while undergoing treatment for Covid-19 in a private hospital. He served as the chairman of the Metpally Agriculture Market Committee. Chandrashekar Rao consoled Suman and his family members.

Later, he enquired with district collector G Ravi about the Covid situation in the district. Collector explained to the Chief Minister that due to perfect implementation of the lockdown, cases had come down drastically in the district.

However, Chandrashekar Rao’s visit to the old Karimnagar district gains importance as it is his first visit after the suspension of former health minister Etala Rajender from the state Cabinet.

As speculations are doing rounds that the Telangana Rashtra Samithi (TRS) has decided to rope in Telangana Telugu Desam Party (TTDP) state president L. Ramana into the party, it is understood that Chandrashekar Rao planned this tour programme to have discussions with L. Ramana, who also hails from Jagtial district.

It may be mentioned here that two days ago, TRS working president and IT minister K T Rama Rao also visited Jagtial district and participated in several developmental programmes.

According to political analysts, ousted minister Rajender has a strong following in the BC community in the old Karimnagar district. So, Chandrashekar Rao decided to rope in some of the leaders of other parties who belong to the BC community, they said.

Meanwhile, the BJP has also focused its attention on Karimnagar district and appointed Karimnagar MP Bandi Sanjay as the state unit president of the party. Incidentally, Sanjay Kumar also belongs to the BC community. By luring several leaders from other parties, especially the ruling TRS, the BJP has slowly started to spread its wings in Telangana state. Before joining the TRS, the BJP leadership earlier invited L. Ramana to join the party.

Considering all these facts, Chandrashekar Rao is now trying to rope in L. Ramana by assuring him MLC post. If Ramana decides to shift his loyalties, then it will be ‘one shot two birds’ for Rao, as the TRS will not only get a leader from the BC community but also make the TDP vanish from Telangana state and can prevent other leaders from joining the BJP, they opined.