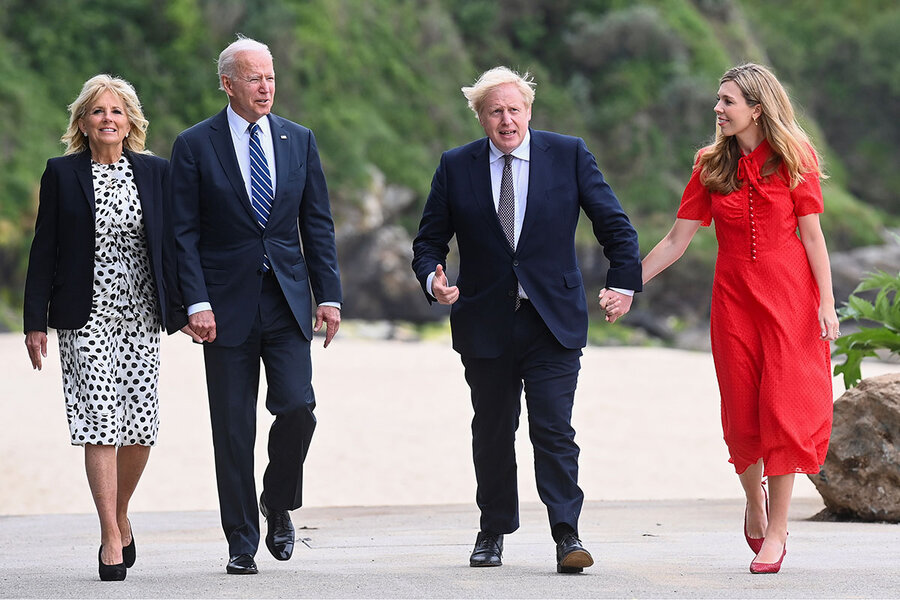 From a starting point in Cornwall, England, President Joe Biden today launches his weeklong European tour to rally democratic allies with a rousing pledge that America is back, and ready to lead efforts to address pressing global issues – from pandemic recovery to climate change.

Yet as Mr. Biden moves over the coming days from England to Brussels and on to Geneva – meeting with most of America’s closest allies at an extraordinary sequence of summits and side meetings – he can expect some wariness mixed in with the overall enthusiasm.

Think of it, say transatlantic relations analysts and some European diplomats, as when the top dog in a group of best friends drops out to do his own thing, only to return one day to reclaim his old role at the head of the group.

This week, when President Joe Biden tells Europe that the U.S. is recommitted to its traditional leadership role, should Europe believe him? Or has America – and the world – changed?

Everybody’s happy the leader is back, but there are also new questions and doubts: How long till the leader goes his own way again? How has he changed – and will he accept that his friends have also changed in his absence?

“The Europeans are not just relieved but are enthusiastic about the message President Biden brings in the context of this trip, with his rhetoric of renewed ties and recommitment to American leadership. They were feeling very lonely … defending the international system without their close American friend,” says Rosa Balfour, director of Carnegie Europe in Brussels.

Europeans will be reassured by a U.S. president speaking a familiar language of transatlantic unity and American leadership after four years of tensions and “America First” under Donald Trump, she says.

“But there is also strong concern in Europe that we haven’t seen the end of Trump and Trumpism, that the Republican Party seems to be captured by the Trumpist wing and could shift America’s global outlook again in a few years,” she adds. “So what Europeans want to see now are some decisions, something concrete that confirms a renewed determination to work together.”

Suggesting the White House fully understands a need to put some meat on the bones of presidential rhetoric, Mr. Biden announced Thursday a “historic” donation of half a billion vaccines to the world’s poorest and less-developed countries over the next two years. The vaccines are part of a U.S.-led effort among the world’s wealthiest democracies to demonstrate an ability to meet urgent global needs.

“When [Americans] have the capacity, then we have the will, and we step up and we deliver,” Jake Sullivan, Mr. Biden’s national security adviser, told reporters Thursday. “As [the president] said … we were the arsenal of democracy in World War II, and we’re going to be the arsenal of vaccines … to end this pandemic.”

Yet others say that without an honest reckoning among friends of how their relationship has changed and what each side now expects from it, Mr. Biden’s trip could end in disappointment.

“While there may be a strong desire for it, I would hope we don’t just get a good-news show with a ‘we are all united’ theme and a masking of the differences that exist on the big issues we face,” says Sven Biscop, director of the Europe in the World Program at the Egmont Royal Institute for International Studies in Brussels.

“I’d rather see what you might expect from a strong friendship,” he adds, “like frank discussions that lay bare the differences but also remind everyone what was behind the friendship in the first place. After four-plus years of moving apart,” he says, “the U.S. and Europe need that honesty to lay the groundwork for making tough decisions.”

There will be no lack of opportunities for such conversations on a trip the White House says will be dominated by “three C’s”: COVID-19, China, and climate change.

In Cornwall, Mr. Biden attends a summit of the Group of Seven advanced economies – the United States, Japan, Germany, France, Italy, the United Kingdom, and Canada. The group aims to regain some of its lost luster and relevance by addressing issues from the post-pandemic economic recovery and inequality to global economic governance – and by inviting the leaders of Australia, New Zealand, South Korea, and India, to underscore the group’s foundation in democratic governance and the global economic shift to Asia.

On Monday Mr. Biden moves on to NATO headquarters in Brussels. There he’ll join leaders from the 30-member transatlantic alliance as it shifts focus from its Afghanistan mission, which ends in September, to renewed in-area threats from Russia and 21st-century threats including cybersecurity and space-based technologies.

In the vein of “tough talk with problematic allies,” Mr. Biden will make time while at NATO to sit down with Turkish President Recep Tayyip Erdoğan. The Turkish leader’s democratic backsliding and mounting human rights violations present a challenge to a U.S. president who has pledged to make both democracy and human rights key elements of his foreign policy.

On Tuesday in Brussels, the U.S. president sits down with the two top executives of the European Union – the first U.S.-EU summit since 2014. For European analysts, the EU summit will be the best venue for Mr. Biden to address the China pillar of his trip. China poses a dilemma for Europe, because while it is now the Europeans’ largest trade partner, China’s human rights violations, anti-democratic moves against Hong Kong, and coercive trade practices against Australia and others have soured European parliamentarians and publics on the relationship.

Attention then shifts to Geneva, for what some analysts are calling the trip’s “main event”: Mr. Biden’s summit with Russian President Vladimir Putin.

White House officials speaking in the run-up to the president’s first overseas foray said it was no accident – nor mere scheduling practicality – that Mr. Biden will be setting the stage for what is expected to be a tough meeting with Mr. Putin by first very publicly renewing ties with America’s constellation of democratic allies.

Still, some transatlantic analysts caution that as important as “renewing ties with allies” may sound, what matters most is the vision for renewed alliances and American leadership – and whether it is based on a U.S.-dominated world that doesn’t exist anymore, or fits a multipolar world with very different challenges.

“All this talk of ‘America is back’ is nonsense. It would be much more comforting if there was greater recognition that the world has changed and there will be no going back to a long-ago golden age” of American leadership, says Michael Desch, director of the Notre Dame International Security Center in Indiana.

“But the rhetoric of Joe’s excellent European adventure doesn’t show much evidence of really grasping that change,” he adds. “It’s a lot of old think, very little new think.”

Another problem for Mr. Biden, Mr. Desch and others say, is that while there may be wide agreement among Western allies on the need for action on climate change and looming post-pandemic global inequalities, on two other Biden priorities – a rising China and threats to democratic governance – there is little unity on the way forward.

“For the U.S., its approach to China is about defending its superpower status and pushing back on China’s rise. But for its part, the EU has no superpower status to defend, so with China it’s much more about navigating the reality of a rising China,” says Carnegie’s Ms. Balfour. “The Europeans prefer dialogue and ambiguity to U.S.-style confrontation.”

That said, there are mounting signs of Europe moving closer to the U.S. on China. The EU has put on hold an investment deal with China in the wake of tit-for-tat sanctions over human rights violations in China’s Xinjiang province. And recently, both Italy and Lithuania nixed infrastructure deals they had reached with China.

Still, simply drawing closer on what they oppose won’t be enough for the U.S. and its European allies to demonstrate the enduring relevance of their friendship to their own citizens as well as to the world, Ms. Balfour says.

“From a global perspective, what we need to see coming out of this trip is a real social contract, a very proactive and concrete commitment to addressing the heightening global inequality that has come out of the pandemic,” she says. “That’s the kind of thing that can be the core of a West that is willing to become inclusive and take greater responsibility in addressing global crises.”