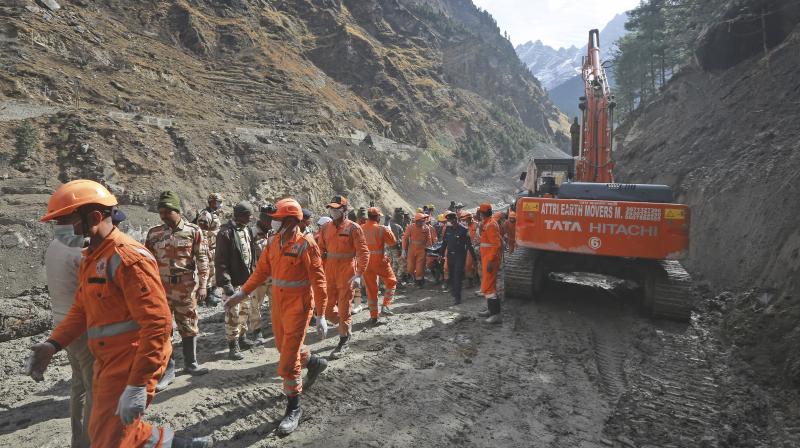 HYDERABAD: Factors such as the increasing instability of the region’s geographical and geological features, and failure to account for long-term sustainability of planned hydroelectric projects, might have spelt doom for the Rishiganga, and the Tapovan-Vishnugad hydel projects in Uttarakhand.

It may be recalled that a large chunk of a glacier collapsed in the Himalayan foothills in Chamoli district of Uttarakhand on February 7 this year resulting in a deluge of water, ice, and rock in the Rishiganga Valley that destroyed the 13.2 mw Rishiganga hydel project and severely damaged the 520 mw Tapovan-Vishnugad hydel project. The unprecedented disaster also resulted in 204 people missing, all of them now presumed dead, with bodies of 72 found in the days following the disaster.

With the Himalayan mountain ranges sitting on one of the most active geological regions in the world with the Indian geological plate pushing northward into the Asian plate and the grinding of these two large landmasses, the disaster led to enormous scientific interest across the world, among geologists, climate change scientists and those specialising in Himalayan studies.

This led to a team of 52 scientists from various disciplines, universities and research institutes from Canada, the USA, Switzerland, India, Germany, Austria, France, the UK, Russia, Norway, Sweden, Nepal, the Netherlands, and Chile, joining forces to study the events that led to the collapse of the glacier and the subsequent disaster.

In a study published in ‘Science’ by the American Association for Advancement of Science, the scientists said the February 7 events showed that the disaster “highlights key questions about adequate monitoring and sustainable development in the Himalaya as well as other remote, high mountain environments.”

As much as 27 crore cubic metres of ice and rock, with some of the boulders larger than 20 meters in diameter were pushed down the valley destroying the two power projects and leading to loss of lives. It was the extraordinary fall height – around 3,700 metres – resulting in gravitational potential energy, the worst-case rock-ice scenario, that resulted in almost complete melting of the glacier ice that enhanced the mobility of the debris flow and the unfortunate location of multiple hydro power plants in the direct path of the flow, all contributed to the disaster, the study concluded.