One of the symptoms of a person infected with COVID-19 is an increase in body temperature, in addition to other symptoms such as body aches, shortness of breath.
It is very important to constantly monitor the body temperature in order to detect the disease at an early stage.
Now temperature monitoring has been introduced at the entrance of many enterprises and institutions. The most common handheld infrared thermometer for these purposes.
The main disadvantage of a portable thermometer is that its performance depends on the operator and the distance to the measured surface (forehead, wrist). Depending on the distance, the temperature may not be readable, distorted, and if not used carefully, the thermometer can spread infection (when touched to the body).
To solve such a problem, the master made a device that can be fixed on the wall in public places and it will measure the temperature without the participation of an operator. The hardware can automatically measure the temperature of the human body if the distance between the sensor and the forehead is within the specified parameters.
Tools and materials: -Arduino Nano; -Temperature sensor GY-906; -OLED-display; -Infrared proximity sensor; -Module charger TP4056; -Battery 18650;
– Battery holder 18650;
– Boost DC-DC converter 5 V; – Rocker switch -15 × 21 mm; -Green LED 5 mm; -5 mm red LED; -2 330 Ohm resistors; -Piezo buzzer; – Board prototype; -Pin connector; -22 AWG wires; -Connecting wires; -Soldering iron; -Nippers; -Wire stripping tool; -3D-printer; -Hair dryer;
Step one: how it works
The principle of operation of the device is very simple. The infrared sensor of the MLX90614 thermometer reads the temperature of the human body when the distance (measured by the IR sensor) between the forehead and the sensor meets the set value. The sensor readings are sent to the Arduino for processing and the processed value is displayed on the 0.96-inch OLED display.
In addition to the OLED display, two LEDs and one buzzer are used for indication.
1. When the body temperature is normal, the green LED (LED1) will light up and a beep will sound.
2. When the body temperature exceeds 104 degrees Fahrenheit (40 ° C), the red LED (LED2) will light up and the buzzer will beep for a longer time.
Step two: power supply
The power required for the entire circuit is provided by two batteries connected in parallel with 18650 batteries. The battery is charged using a TP4056 charging module.
The battery voltage is boosted to 7 V using a boost converter module (MT3608). The output of the boost converter is connected to the Vin pin of the Arduino.
The switch is installed between the output of the TP4056 charger module and the boost converter. 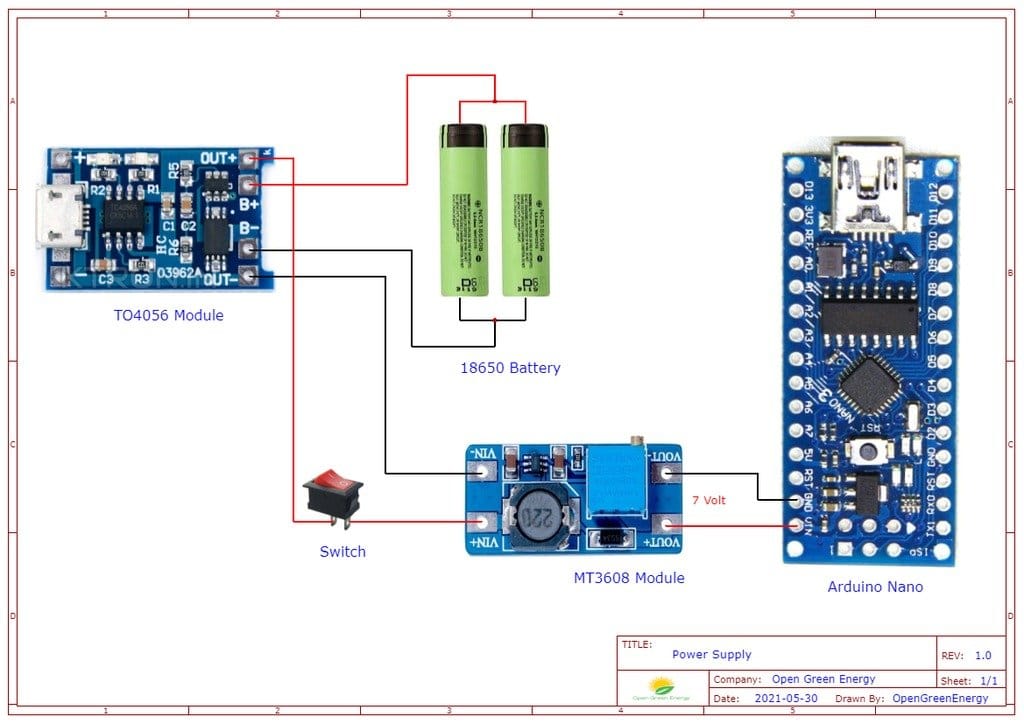 Step third: preparing the Arduino board and temperature sensor
To keep costs down, the manufacturer often ships the board and connector pins separately.
To solder the pin connectors to the board, first insert the connectors into the breadboard. This is optional, but it is a great way to ensure that the pin headers are perpendicular to the board and parallel to each other. Next, you need to install the board on the pins and solder.
Step four: infrared temperature sensor MLX90614
The MLX90614 is a non-contact infrared thermometer capable of measuring temperatures in the range of -70 to 380 ° C. The sensor uses an IR sensitive thermopile detector chip and a signal conditioning IC integrated into a single chip. It works on the basis of the Stefan-Boltzmann law, which states that all objects emit infrared energy, and the intensity of this energy will be directly proportional to the temperature of this object. The sensing element in the sensor measures how much IR energy is emitted by the target object, and the computing unit converts it to a temperature value using a 17-bit on-board ADC and outputs the data via the I2C communication protocol.
The sensor measures both the object temperature and the ambient temperature environment for calibrating the object temperature value. The MLX 90614 sensor can read ambient temperatures ranging from -40 to 125 C (-40 to 257 ° F) and object temperatures ranging from -70 to 380 ˚C (-94 to 716 ° F).
Connecting an infrared thermometer to the Arduino is very simple as it uses the I2C communication interface.
The MLX90614 thermometer has 4 pins: VIN, GND, SCL and SDA.
The connections should be as follows:
Arduino – & gt; MLX 90614
5V — & gt; VIN
GND – & gt; GND
A5 —- & gt; SCL
A4 —- & gt; SDA
Step five: battery connector
In the circuit, you need to connect two 18650 batteries in parallel. The battery holder that the master used is a holder with two slots with independent contact for connection. To make a parallel connection, connect the two terminals on each side together with a wire.
Then solder the red wire to the positive terminal and the black wire to the negative terminal of the battery holder. 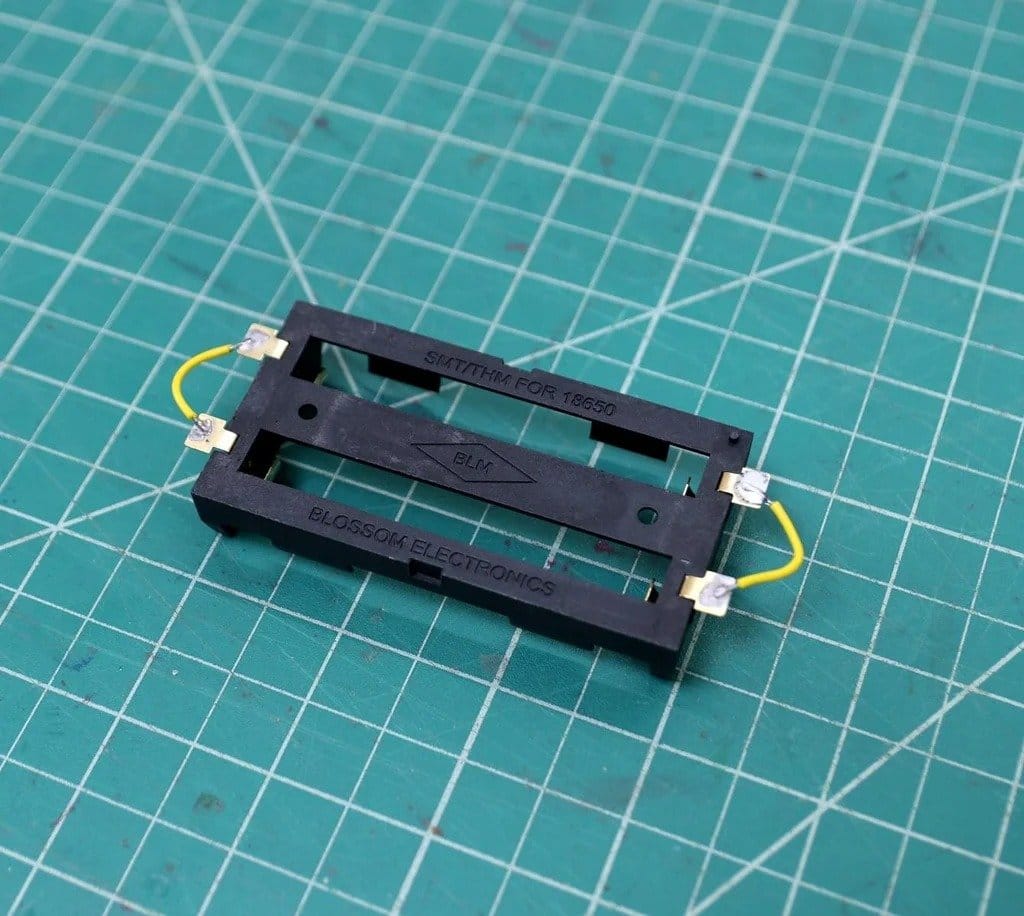 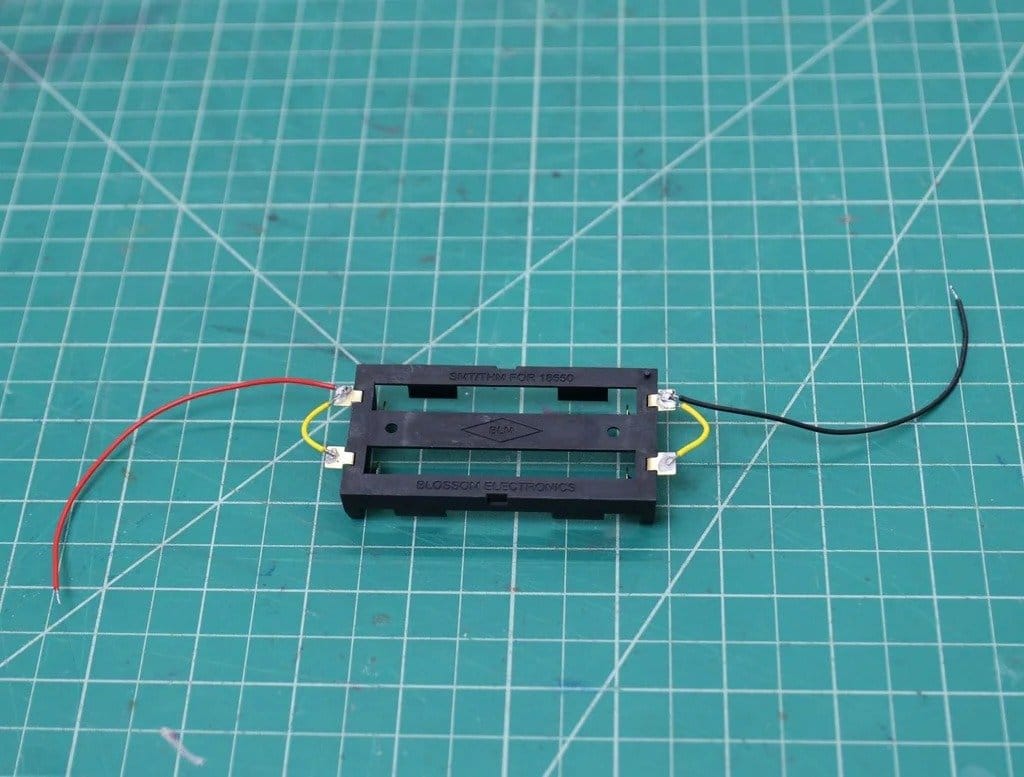 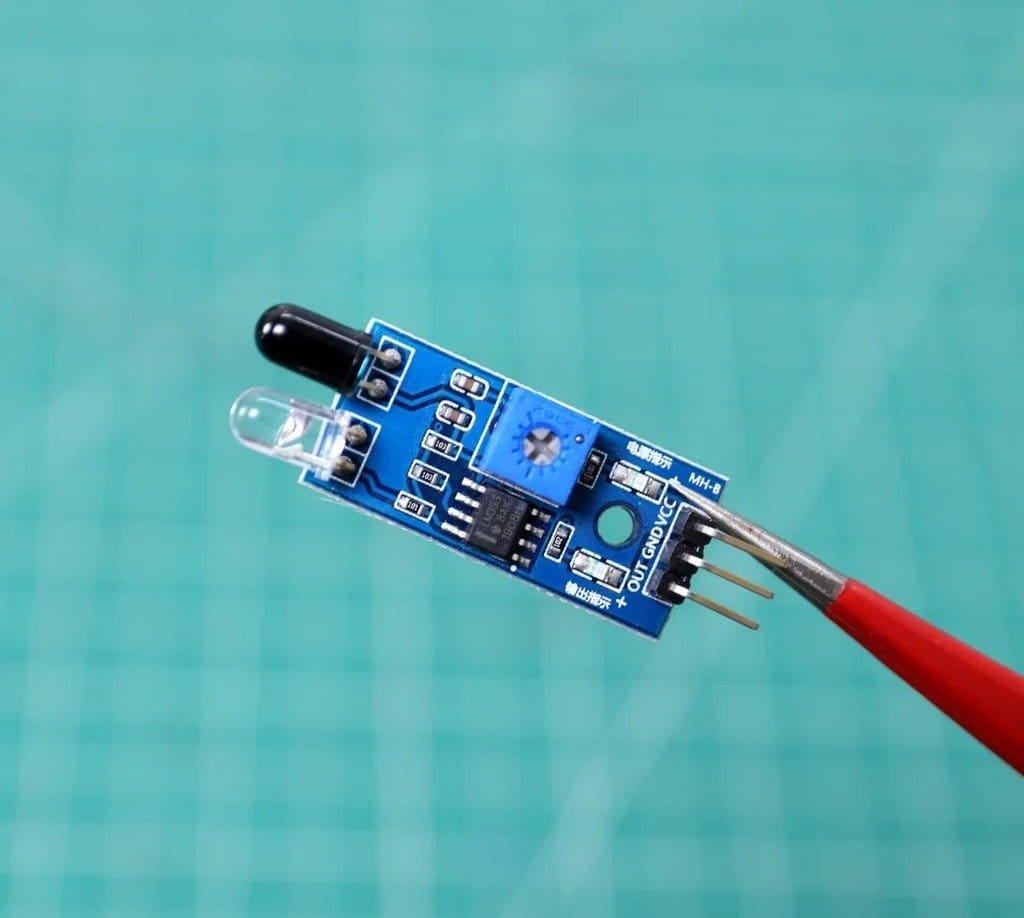 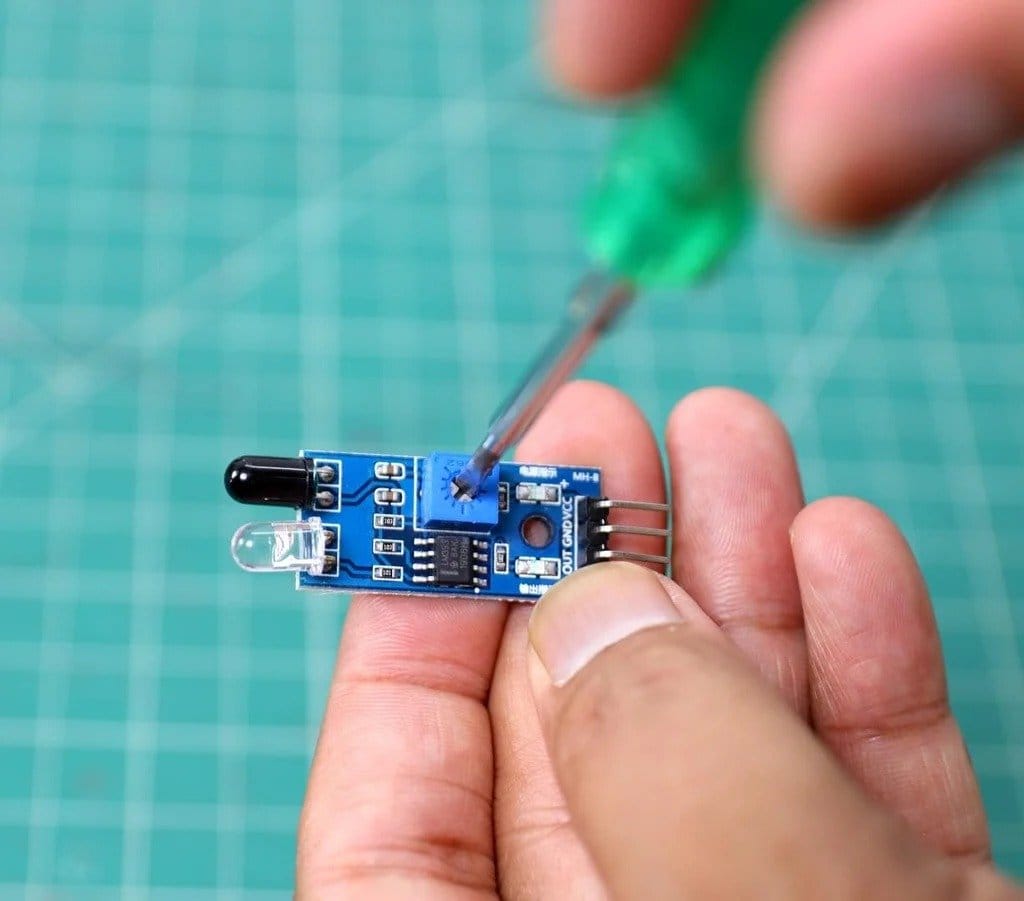 Step Seven: OLED Display
A 0.96-inch OLED display is used to display body temperature. The display has a resolution of 128×64 and uses the I2C bus to communicate with the Arduino. Two pins SCL (A5), SDA (A4) in the Arduino Nanno are used for communication.
The master uses the Adafruit_SSD1306 library to display the parameters.
The connections should be as follows:
Arduino – & gt; OLED 5V — & gt; VCC
GND – & gt; GND
A4 —- & gt; SDA
A5 —- & gt; SCL 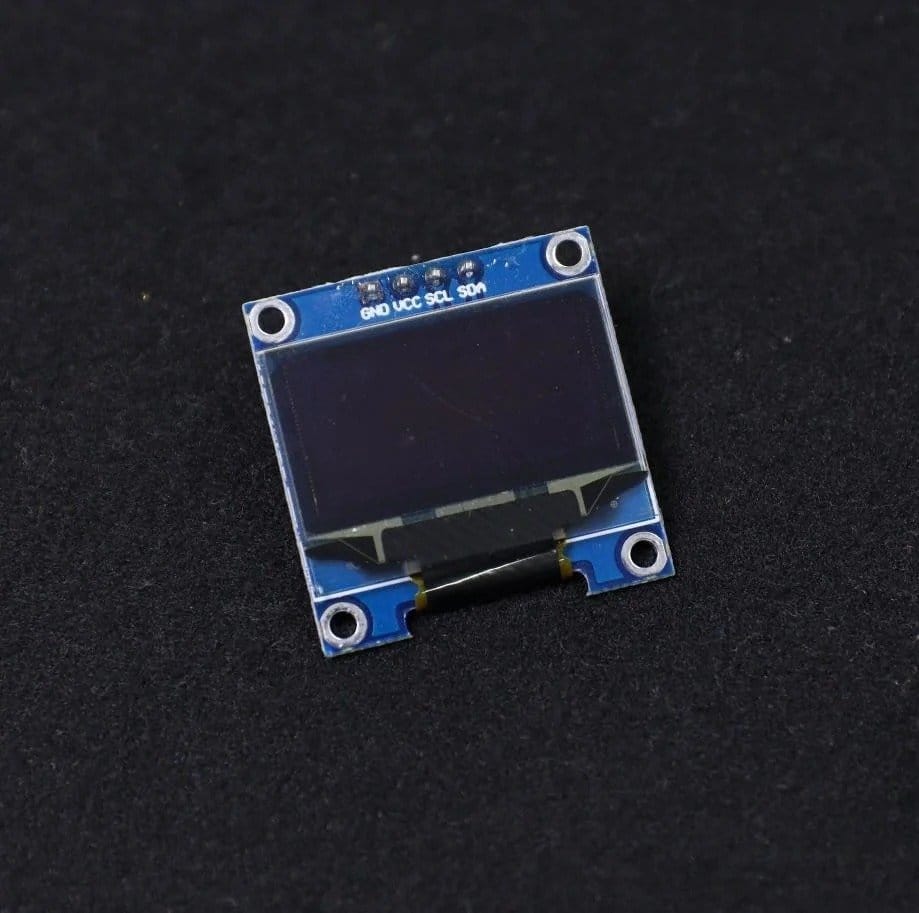 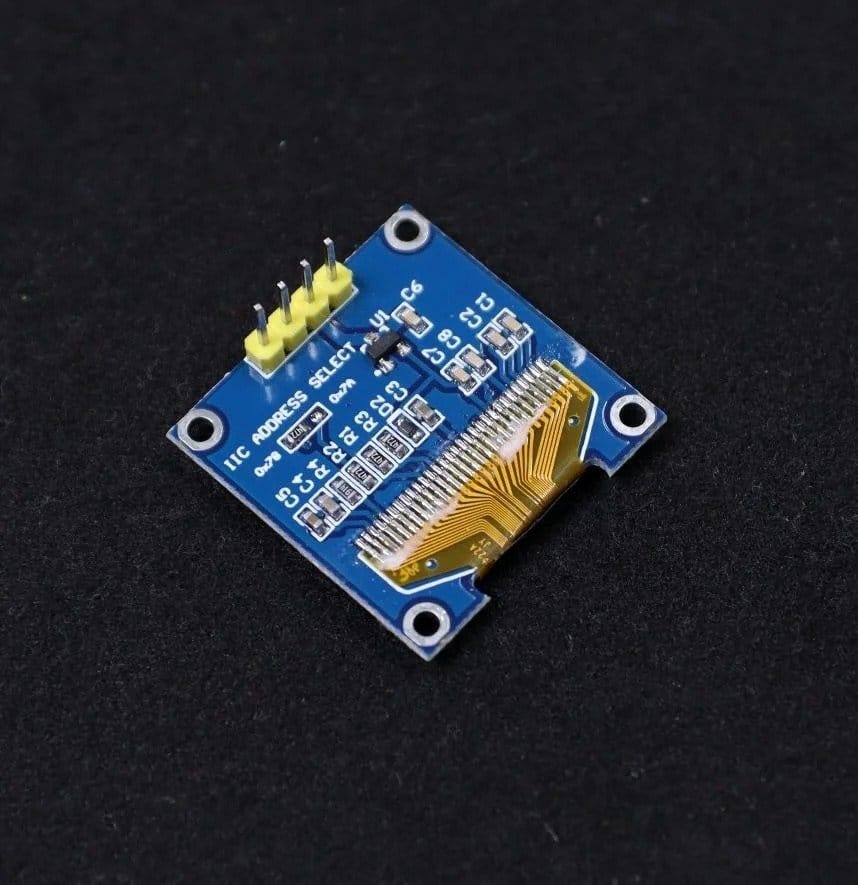 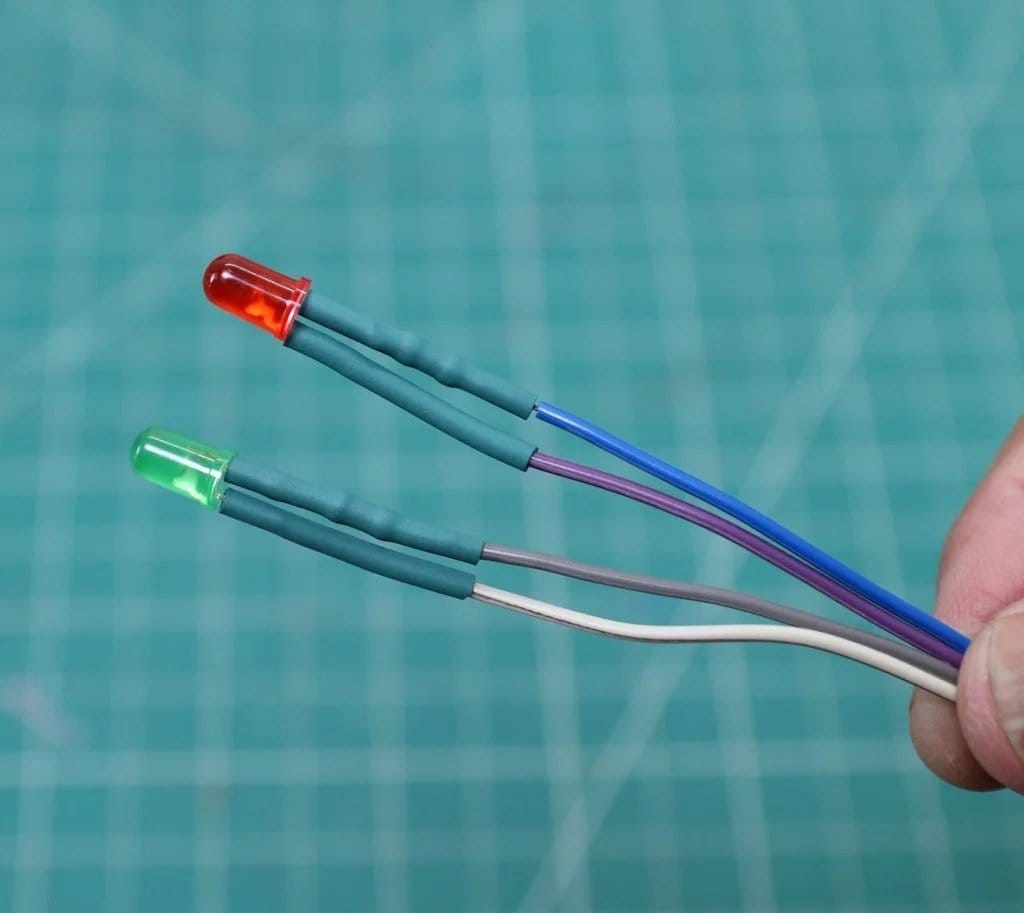 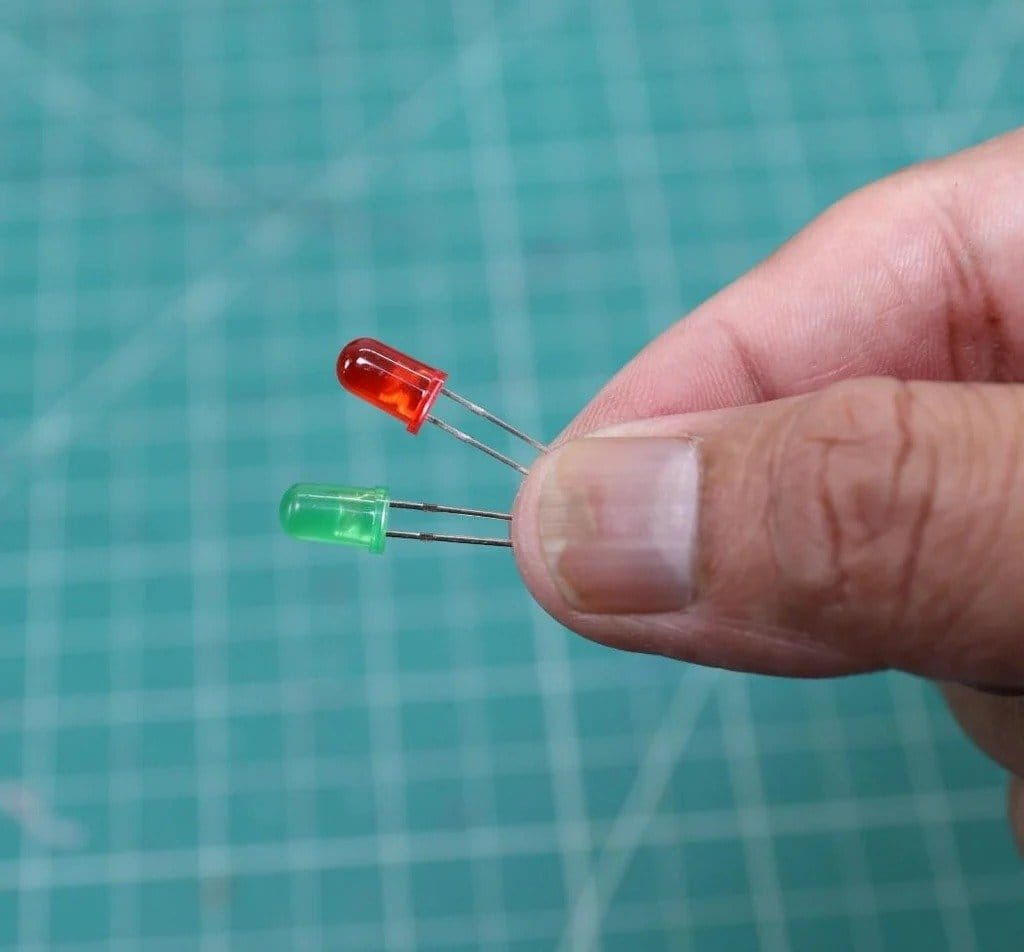 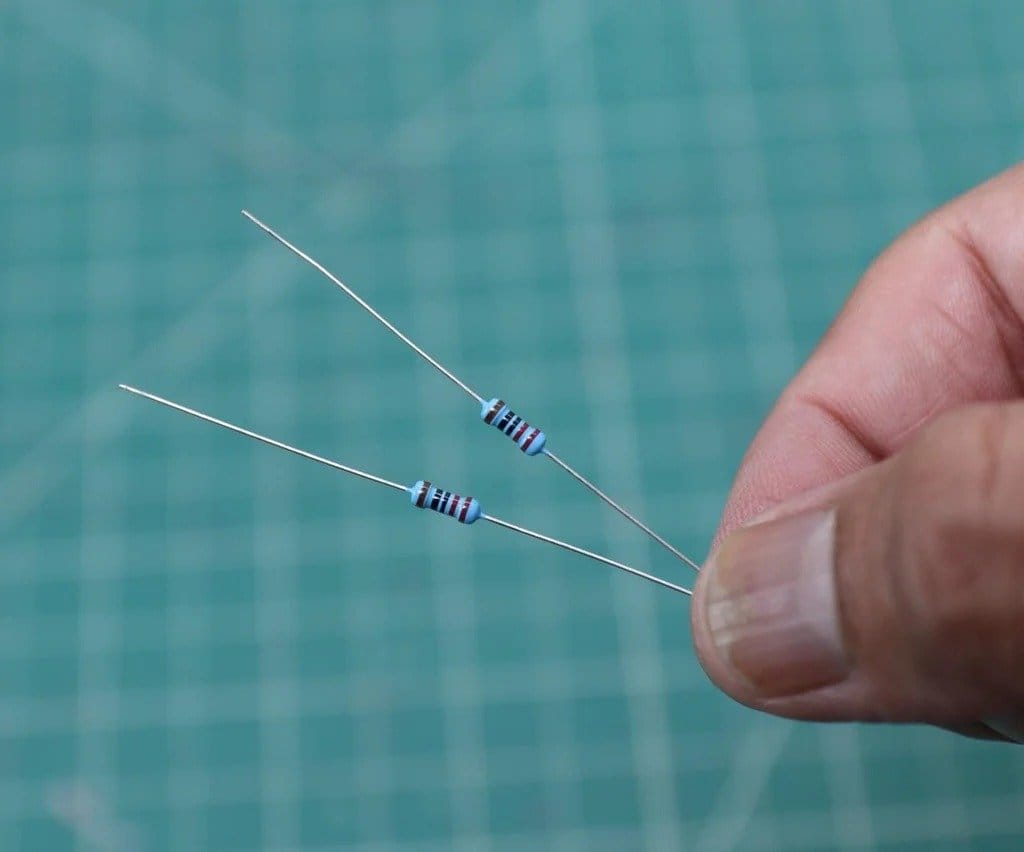 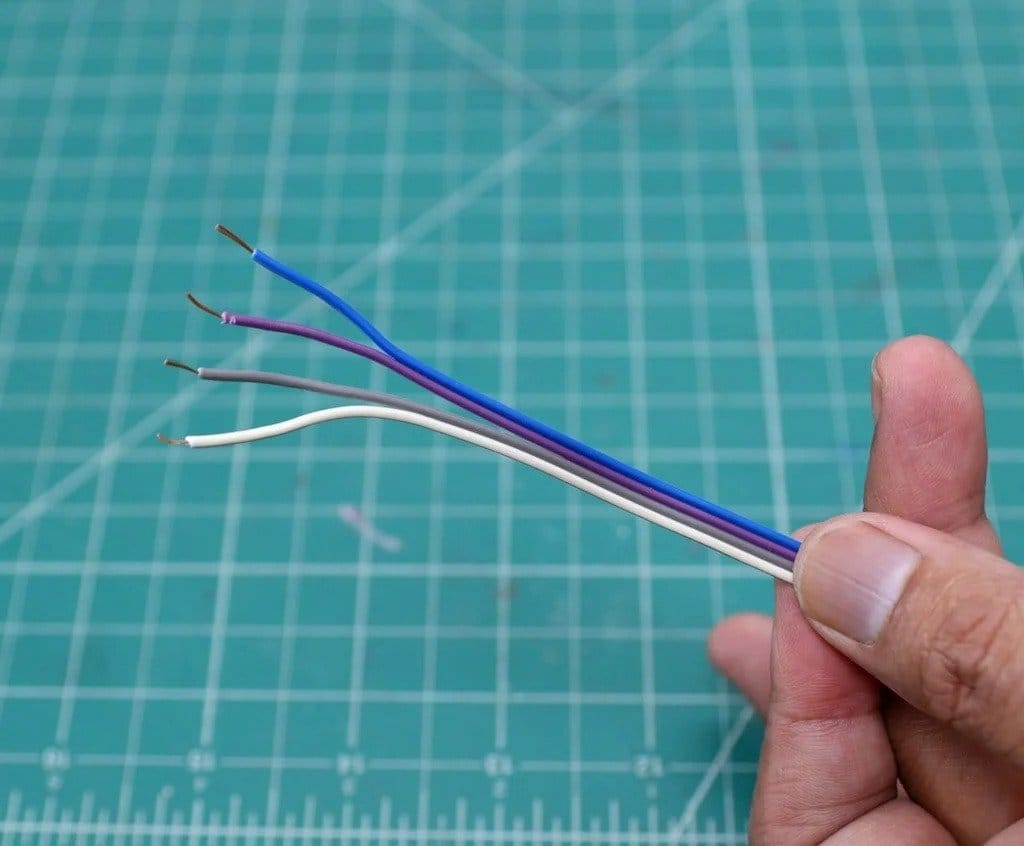 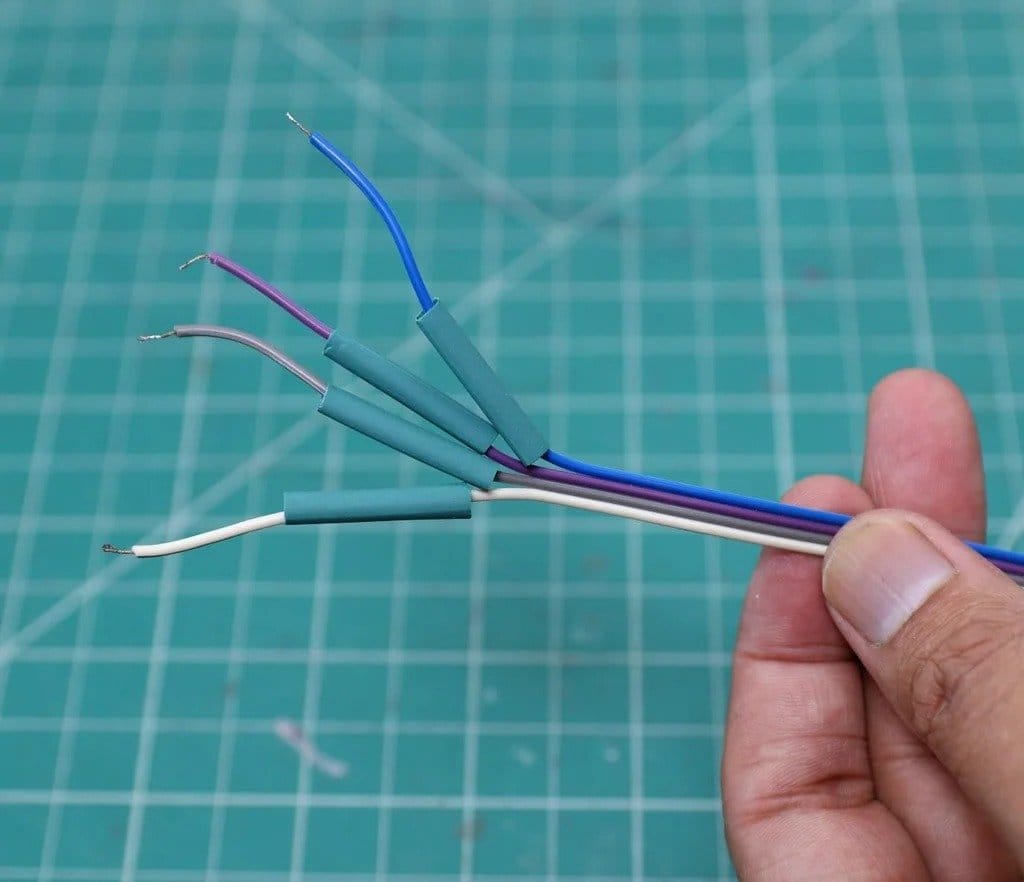 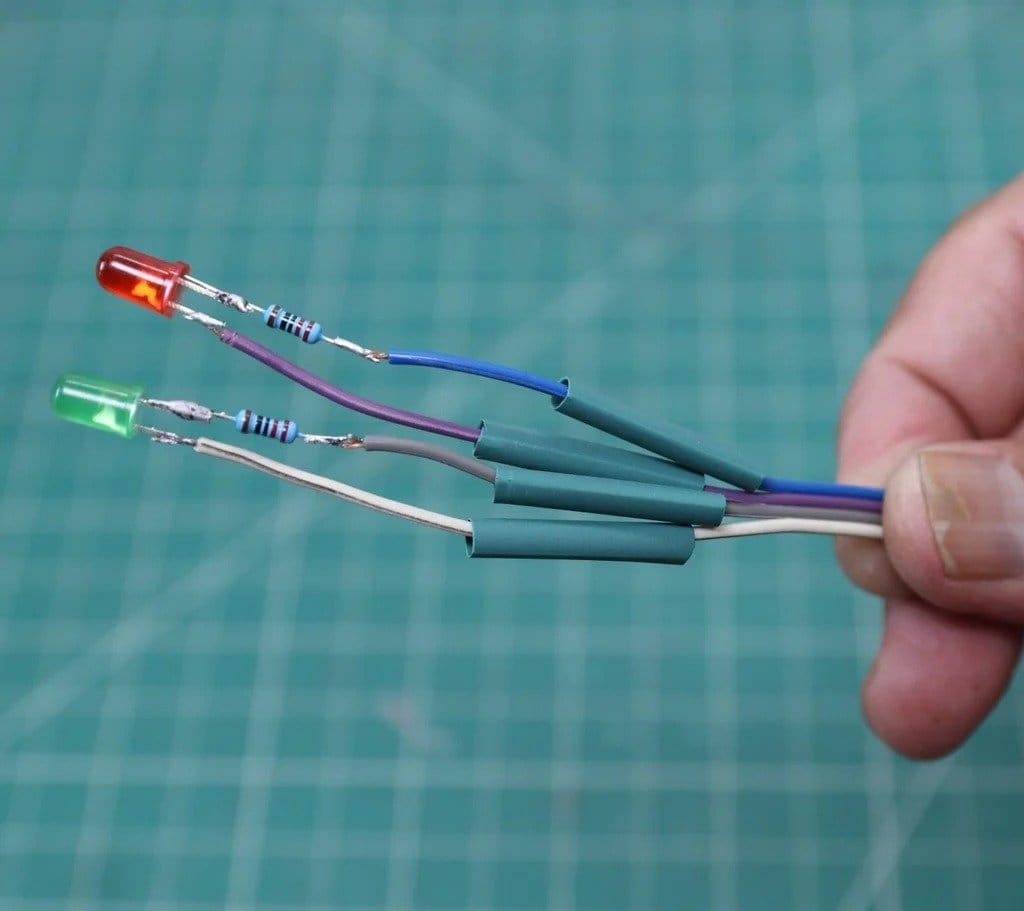 Step nine: buzzer
The device uses a piezo buzzer for notification. The buzzer has two terminals: the longer one is positive, the shorter one is negative.
The connections should be as follows:
Arduino – & gt; Buzzer
D7 – & gt; positive terminal
GND – & gt; negative output
Step ten: preparing the board
Most of the modules and components connect to the 5V pin of the Arduino and GND. Unfortunately, the Arduino Nano only has one 5V pin and two GND pins. To solve the problem of power supply, the master prepared an expansion board.
In addition to the 5V and GND pins, two more SDA and SCL pins are needed to connect the MLX 90614 sensor and the OLED display. 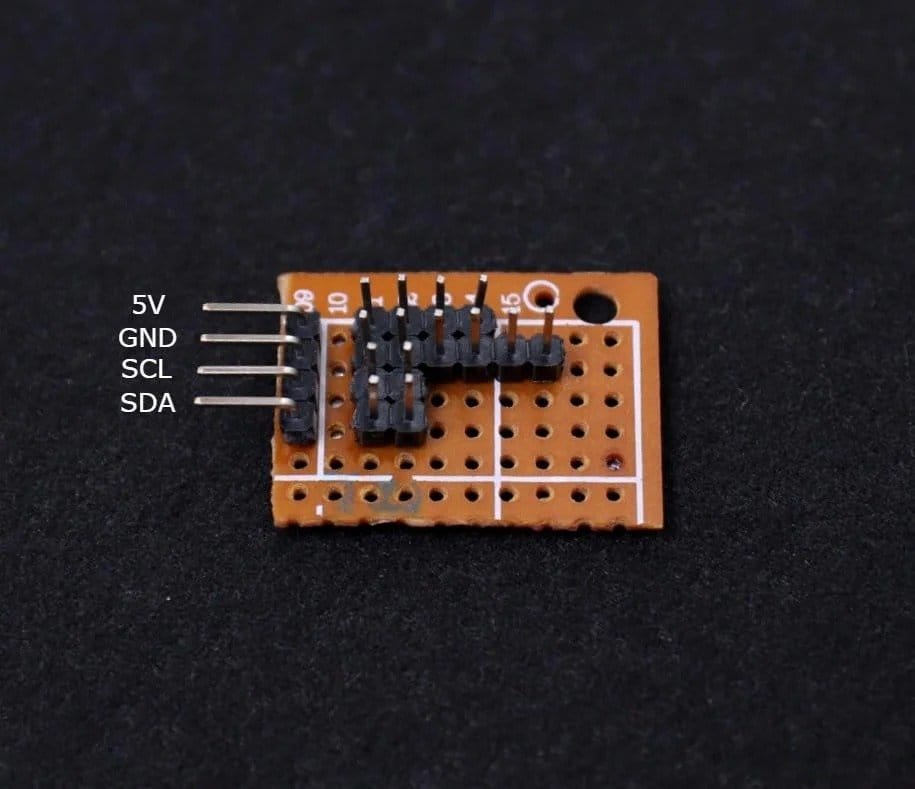 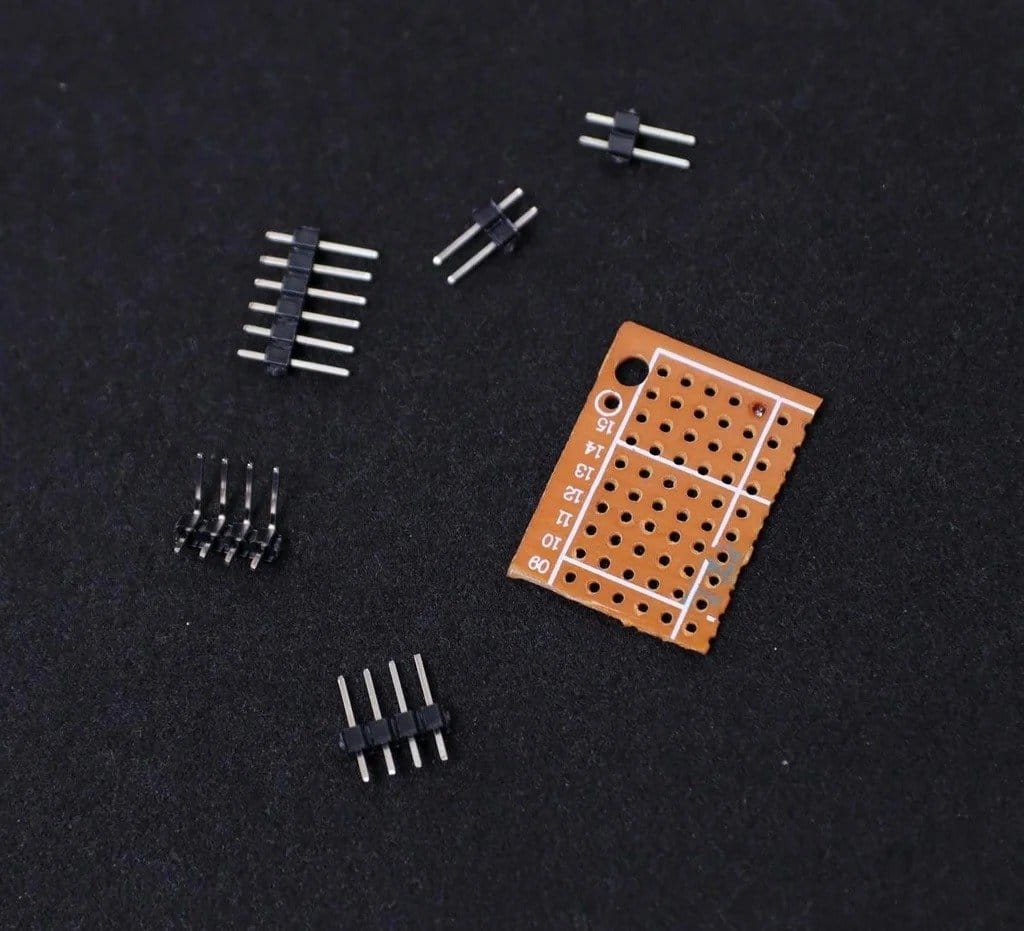 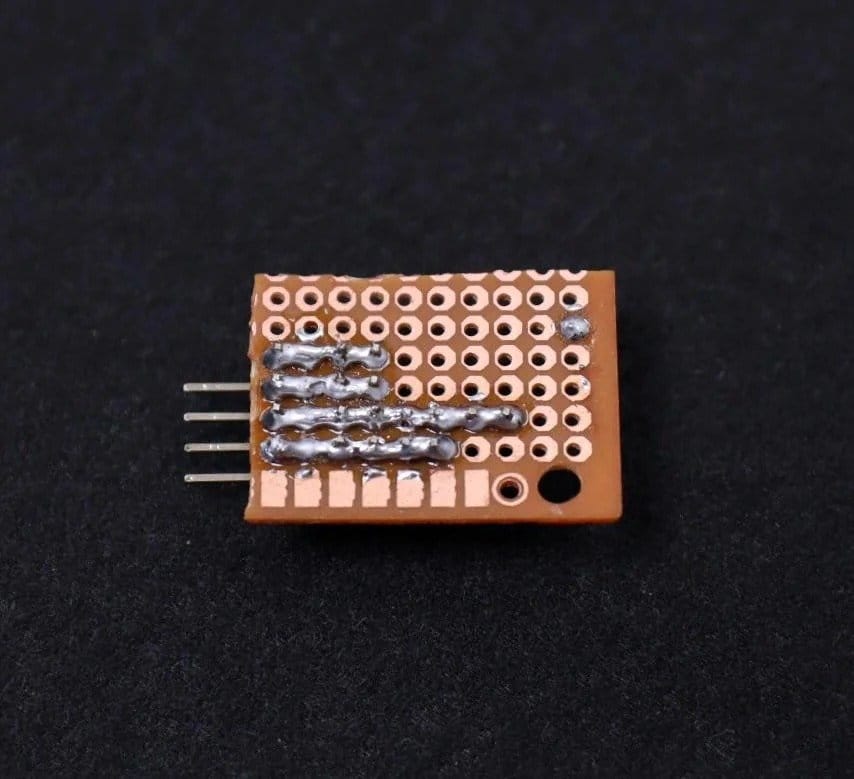 When If you wish, you can order a board on a specialized website. Files for PCB fabrication can be downloaded here.
Step eleven: diagram
All details are prepared and now you can assemble the electronic part according to the diagram . 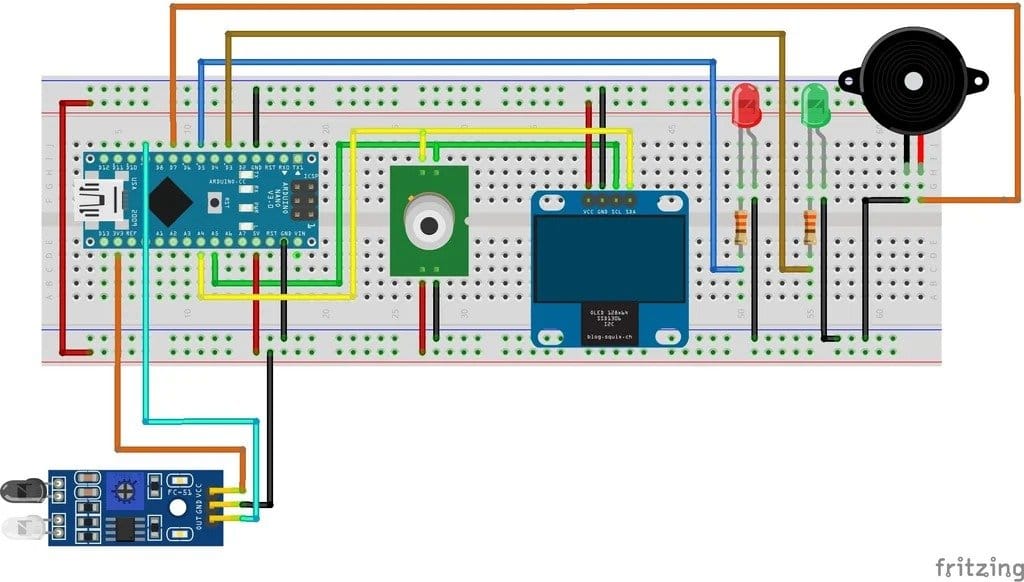 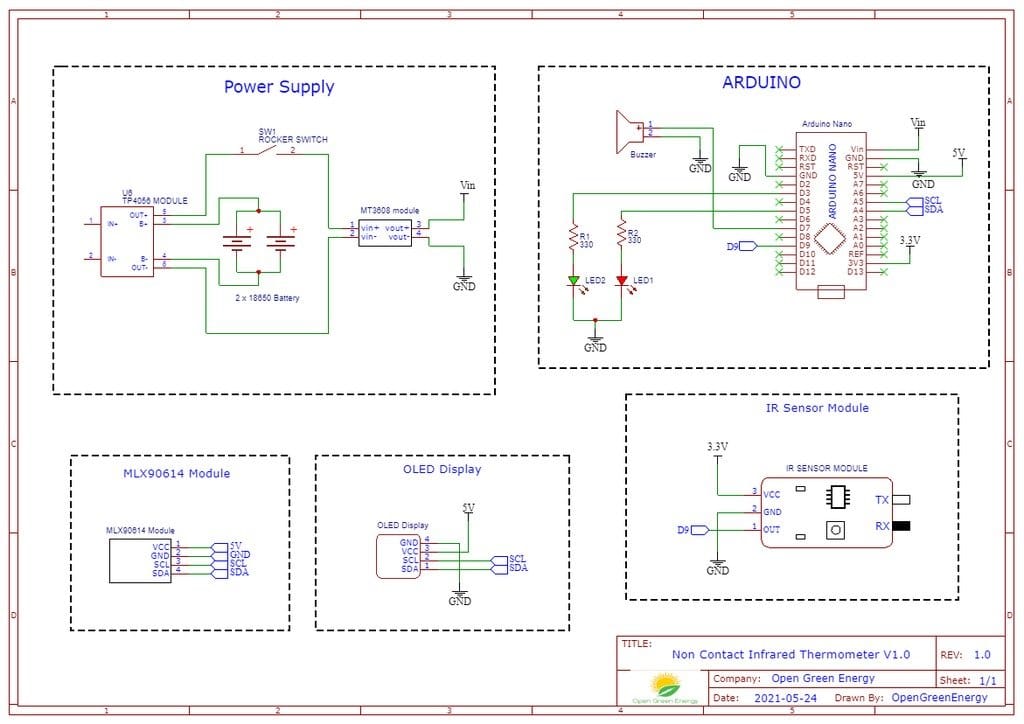 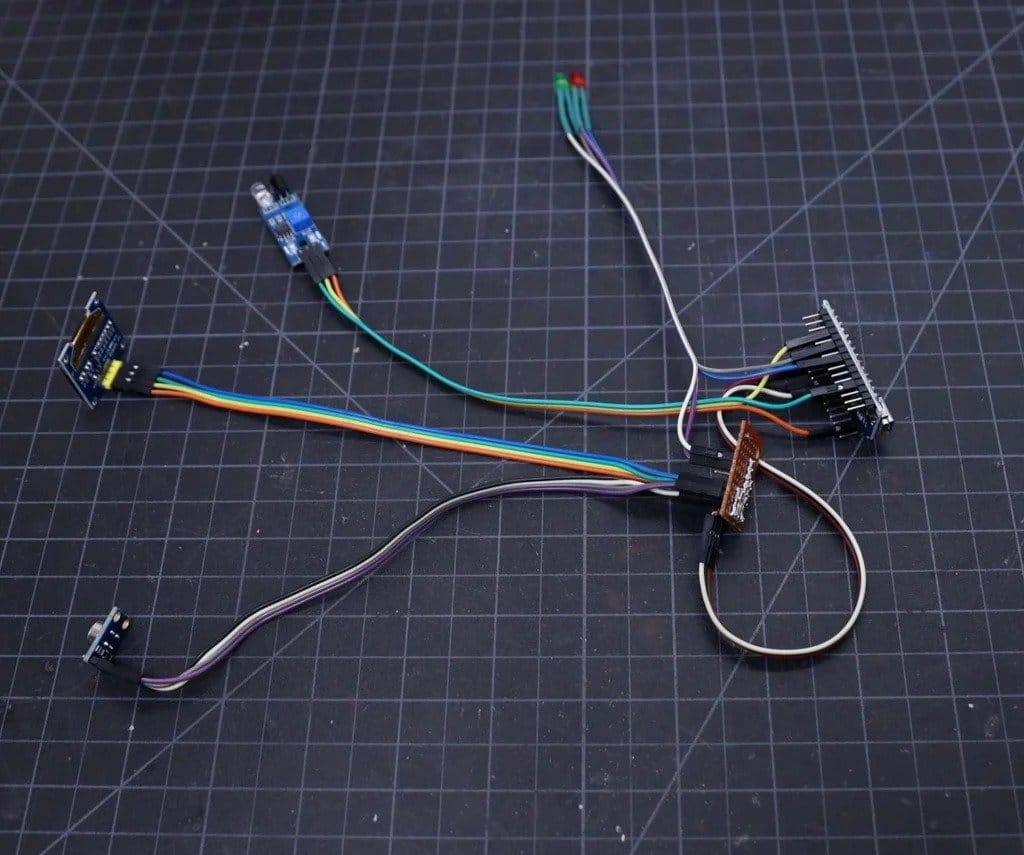 Step twelfth: software
Next, download the Arduino sketch and install all the libraries.
Libraries:
1. Adafruit-MLX90614-Library
2. Adafruit_SSD1306 Library 3. millisDelay
Next, we connect the Arduino Nano to the computer. Install the correct board and COM port number and upload the code to Arduino.
Non_Contact_IR_Thermometer_V1.0.ino
Step thirteenth: printing the body
The body consists of two parts:
1. Front of the case
2. Rear cover.
When printing, you need a support structure to print the front of the cabinet.
The print settings are as follows:
1. Print speed: 60mm/s
2. Layer height: 0.2 mm
3. Density of filling: 30%
4. Extruder temperature: 200 ° C.
5. Table temperature: 65 ° C. 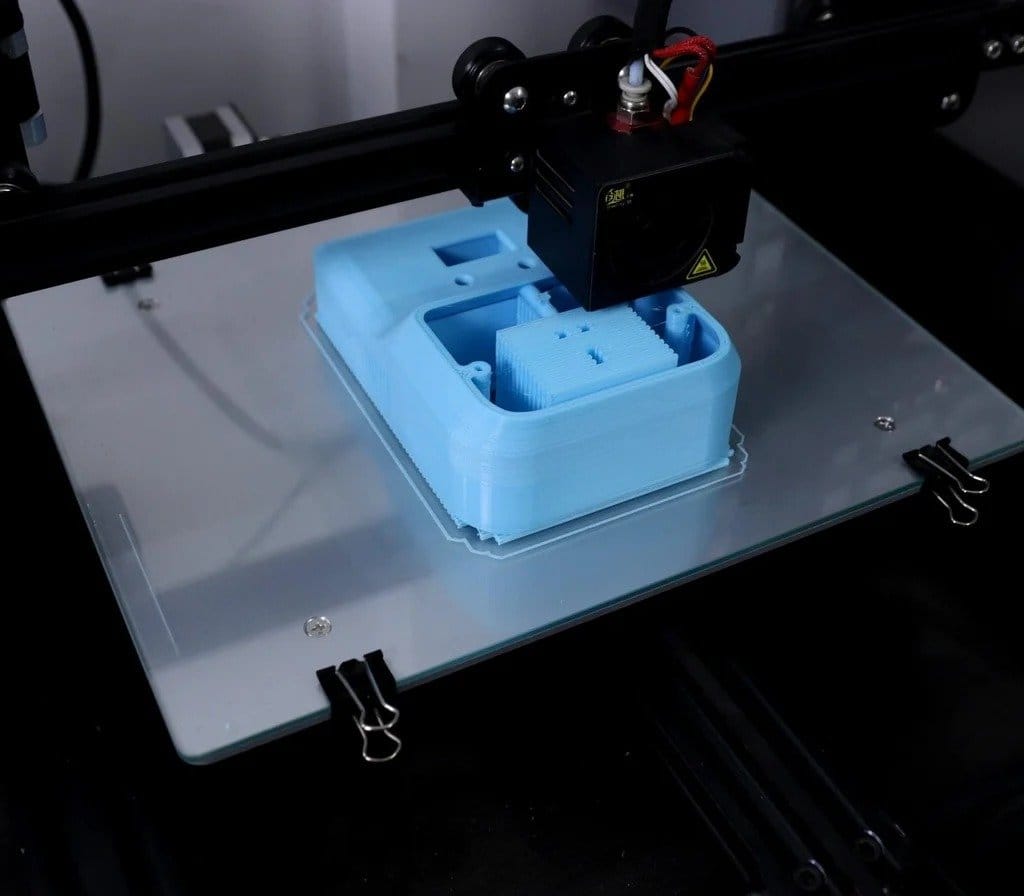 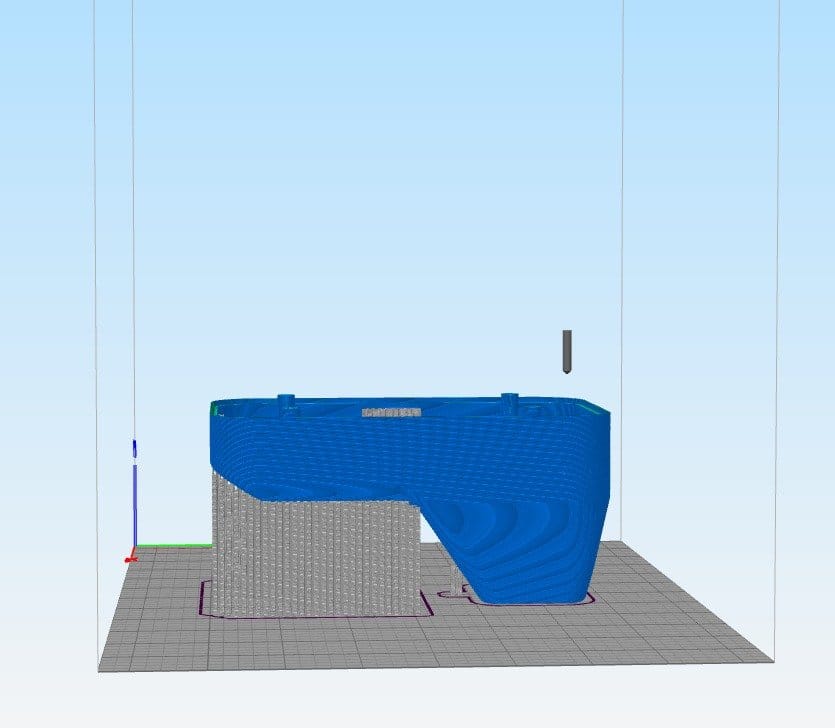 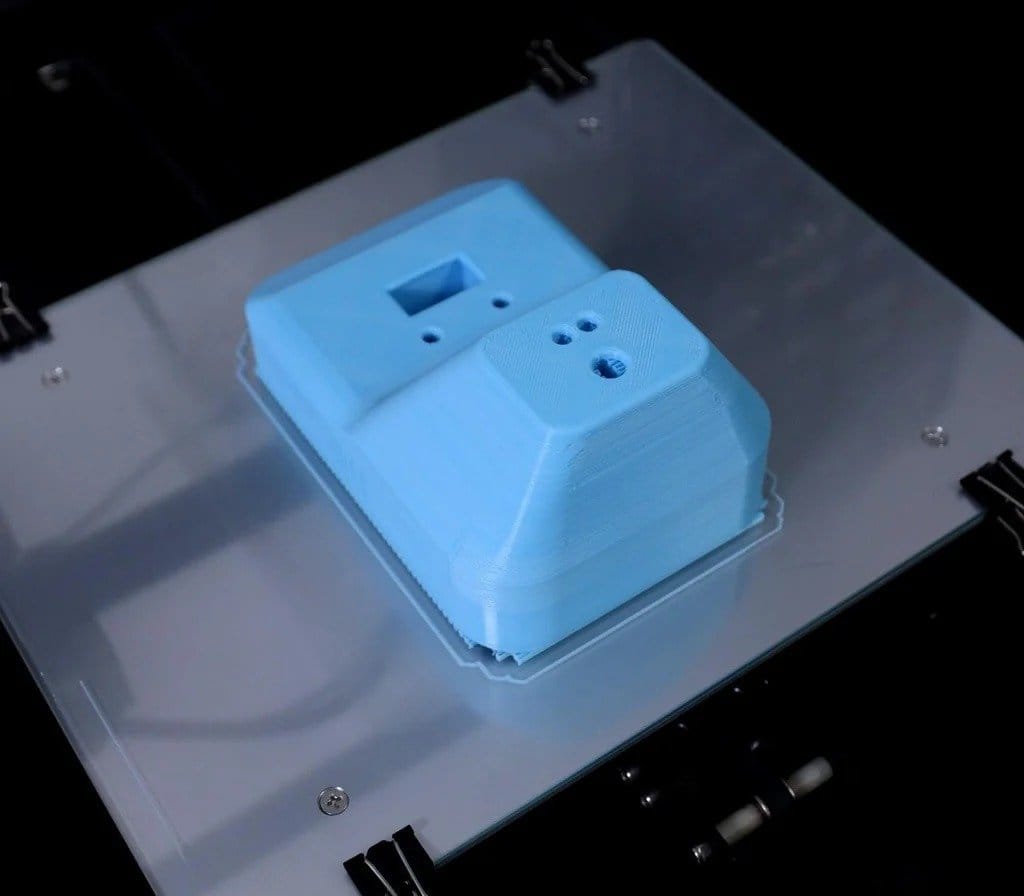 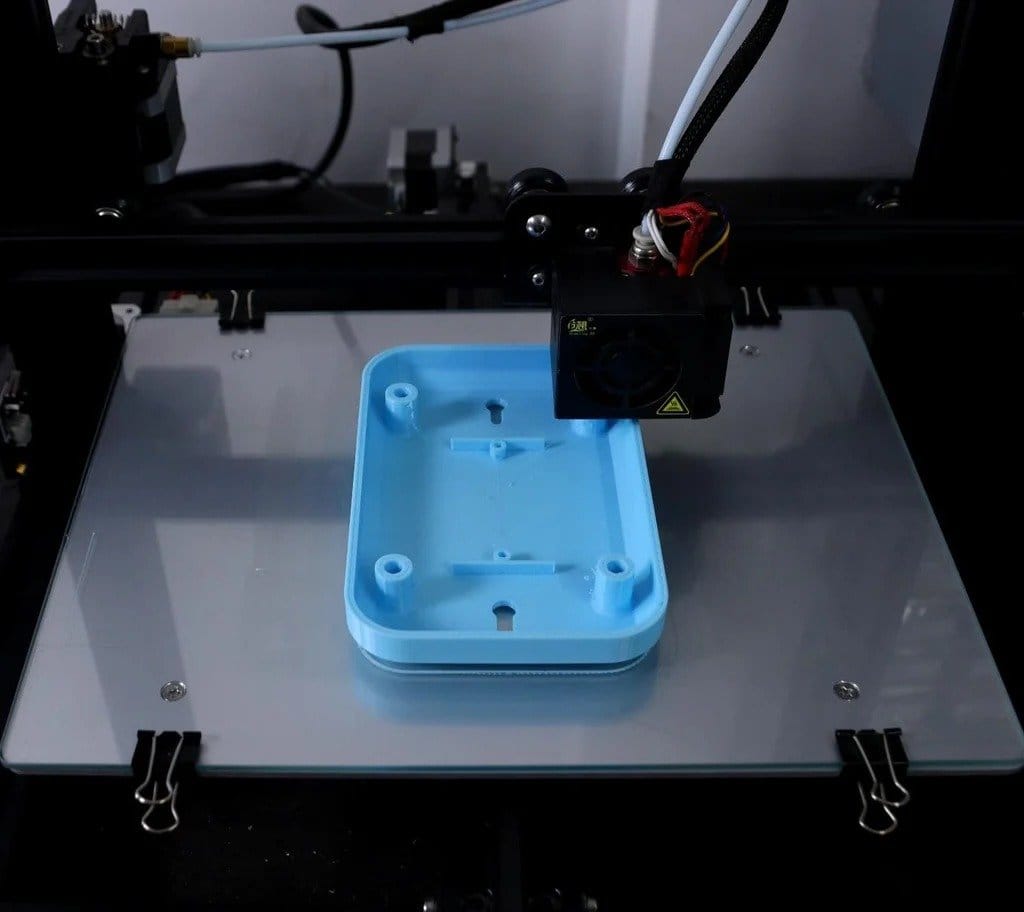 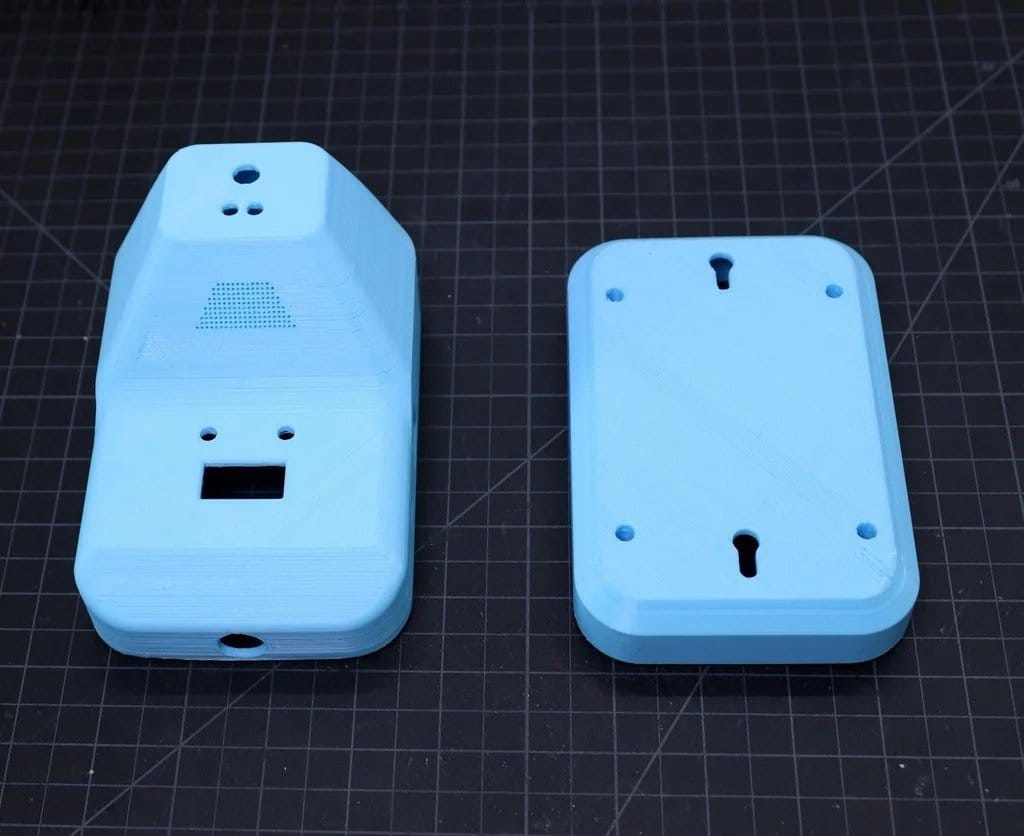 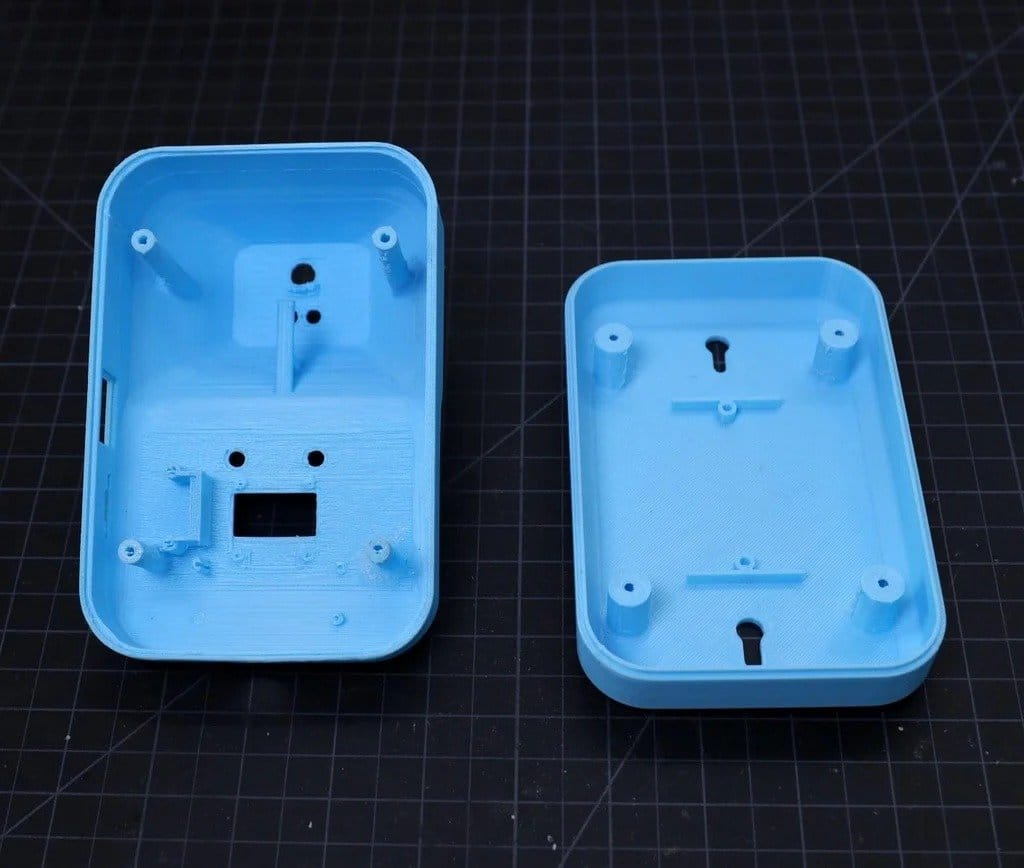 Files for printing can be downloaded below.
BackCase_iThermowall.stlFrontCase_iThermowall.stl Step fourteen: assembly
Next, you can start assembling the device. The assembly is intuitive. The craftsman used hot melt glue and double-sided tape to secure all the parts. After installing the parts, close the back cover and tighten the 4 screws.
Step fifteen: installation and testing
Before the first use, the wizard charges the device. Any 5V/1A charger can be used for charging. A red LED on the TP4056 module indicates that the batteries are being charged and a blue LED indicates a full charge.
After charging, turn on the toggle switch and wait until the OLED display shows the message “initializing”.
After checking the correct operation device (you can simulate high temperature for example with a soldering iron), the device is installed in the desired place. 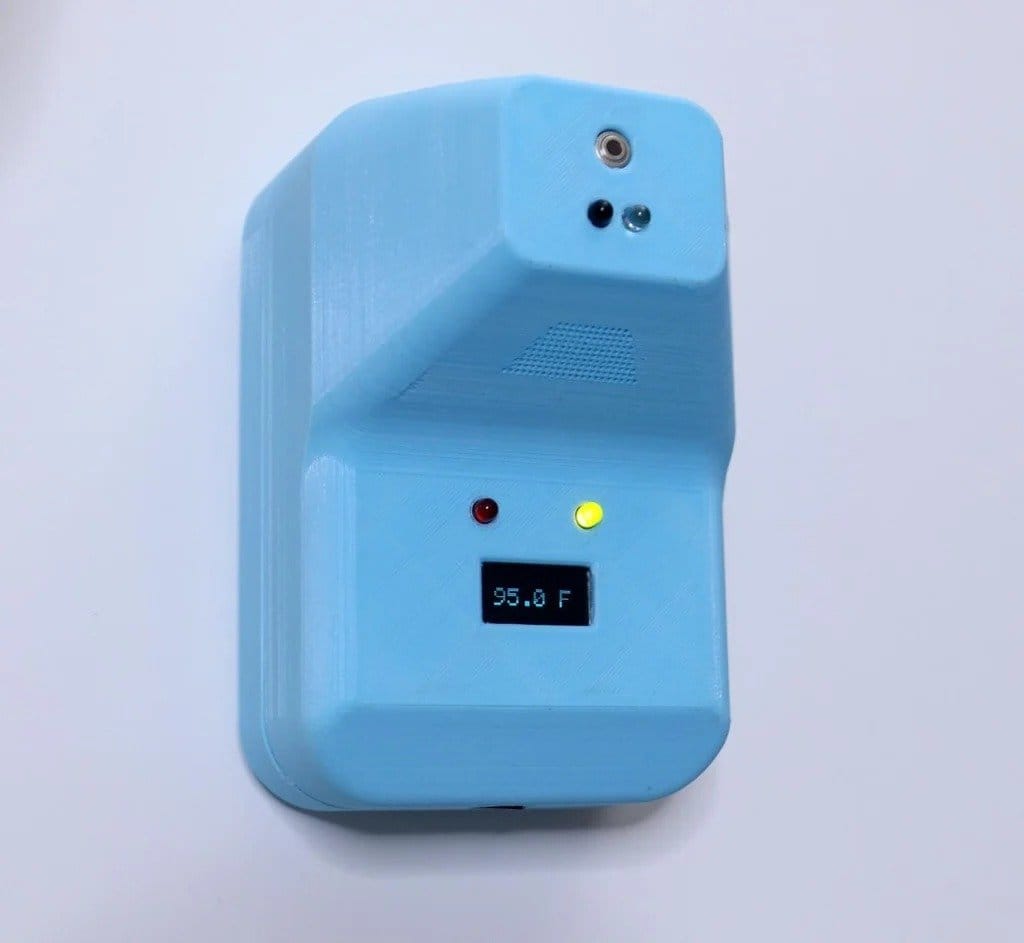 The whole process of assembling such an infrared thermometer can be seen in the video.