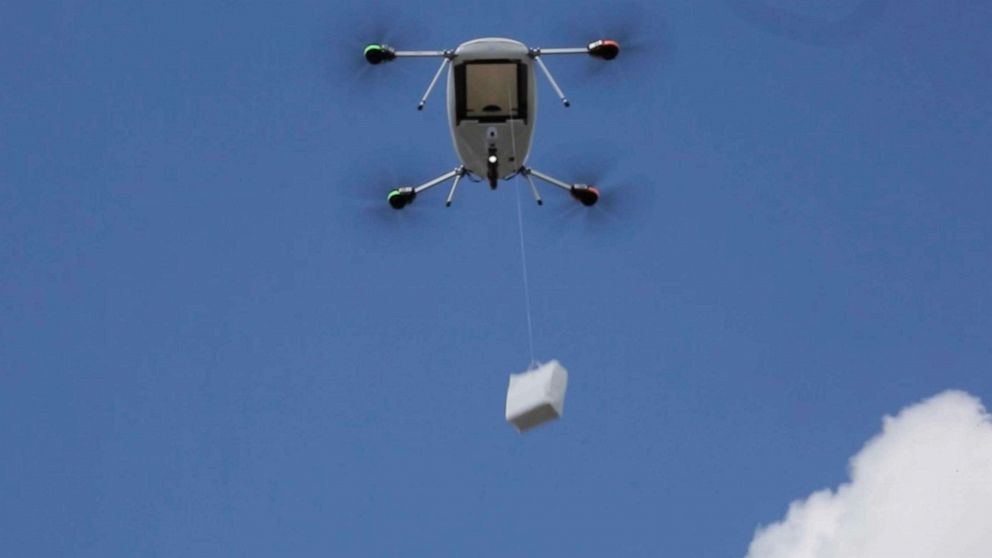 ORANMORE, Ireland — Staring upward, Fiachra Quigley watched his coffees slowly descend 80 feet onto his driveway, lowered at the end of a string. Above him, a drone about the size of a go-cart hummed, closed its cargo doors and then flew off over his house.

Coffee delivery by drone has become a common sight in Oranmore, a town of 8,000 on Ireland’s west coast and the unlikely spot that has become one of the only places in the world where drone food deliveries happen regularly.

“There was massive novelty value at the start,” said Quigley, a 48-year-old self-employed entrepreneur. “[But] it just something that becomes habitual. It becomes part of your day-to-day.”

The town — with its one street of pubs and restaurants and a castle perched by the sea — was chosen as the site for a trial program by the Irish startup company Manna. The company is offering local eateries and a supermarket to use two drones to reach their customers.

The trial puts Manna among a handful of companies doing regular deliveries just as the market for mass commercial drone delivery looks increasingly close to finally taking off. Regulations are gradually falling into place in Europe and the United States and some experts believe drone delivery could start to become mainstream within the next few years.

That potential has helped Manna attract $25 million in investment, reflecting the growing excitement around the industry that’s value by some estimates could grow by billions of dollars by 2030.

“They’re at such an early stage in this business that has so much potential that they’re really in an amazing position,” said Miriam McNabb, editor in chief of DroneLife, a site covering the industry.

“Anybody who’s performing drone delivery is really helping to move the ball forward for the entire global industry,” she said.

There are an expanding number of drone delivery trial schemes around the world, some accelerated by the pandemic as deliveries boomed during lockdowns. Alphabet’s drone subsidiary Wing is running trials in Virginia, Finland and Australia. UPS has delivered medical supplies during the pandemic and Walmart is partnering with several start ups to trial deliveries. Amazon is also experimenting at several test sites.

Since December, Manna’s two light gray drones, with their pod-like bodies and four propellers, have been seen zipping over Oranmore. The launch pads are based on the roof of the local Tesco supermarket, that sits conveniently by a main street of takeout restaurants.

A half dozen Manna technicians run the trial, loading deliveries — that can weigh up to 2 kilograms — into a white paper bag, which is placed into a removable cargo bay inserted into the drone. Set to fly at 50 mph, the drones cruise at 260 feet to reach their destination and can reach anywhere in the town within two minutes. Once over a delivery house, the drone lowers to 80 feet before a hatch on its belly opens and the bag gently spirals to earth at the end of a thin rope.

The drones fly autonomously. At their cruise altitude of 260 feet, they are essentially silent to people on the ground, though they sound something like a neighbor’s leaf blower for the 40 seconds or so when they lower. The drone is able to reach any house in the town in about two minutes.

Most of the restaurants in Oranmore have signed onto the trial. Anne Forde, owner of the Poppy Seed Cafe, said they were sometimes sending around between 10 and 20 deliveries by drone each day.

“The majority of the people I know are using it,” Quigley said. He said his family now orders at least once a week, but often more, turning to it for last-minute impulse buys like ice cream for movie nights.

On the day in May when ABC News visited, Manna received around 30 orders in four hours, but had to suspend service after one of the drone’s engines suffered a malfunction. The company said it was normally doing between 30 and 100 deliveries a-day and it has reached around 30% of the town’s households. The current delivery charge being trialed in around 4 euros (about $5).

Manna’s CEO Bobby Healy said the company plans to expand to cover 150,000 customers in the next 18 months before launching commercially in two European countries in 2023.

Healy is the founder of CarTrawler, one of Ireland’s most successful startups. To serve 150,000 customers, he said, Manna would need around 10 drones, saying a single human operator could manage 20 drones.

The trial in Oranmore is, for now, still operating under some more earthbound constraints.

The Manna team has to collect the food by car or foot from the restaurants before launching it from the roof. Under the trial regulations the drone must remain within line of sight of a Manna observer and company technicians accompany every delivery by car to monitor it. A pilot able to take control in an emergency also watches from the supermarket roof.

For now the drones also only fly in calm skies, although the company says they are capable of handling the daunting weather common to Ireland’s west coast.

The obstacles Manna is working through are those confronting drone delivery generally. While the technology is increasingly ready, regulation has been an enormous hurdle.

Promises that drone delivery is around the corner have been circulating for about a decade, but the development of rules for mass flight have been a distant prospect. Increasingly, though, experts in the industry believe they might be within sight.

The European Union is making deliberate strides toward establishing the regulation. In December, the bloc instituted the new European Drone regulation that for the first time introduces uniform drone rules for every member country and creates a Europe-wide license for commercial drone operators, a crucial step toward large-scale deliveries. Manna rapidly received the license this year.

In the U.S., the Federal Aviation Administration released two key new rules in April — establishing remote identification for drones and also allowing flights over people and at night under certain conditions. A final set of rules is likely to take years more, but the time frame of two to three years is now plausible, said McNabb.

Healy said in Europe the regulations are already essentially in place for the company to launch commercially in 2023. The company has hired a head of U.S. operations and Healy said he expected the American market would likely be only a year or so behind Europe.

“If you look at this compared to any other sort of developing of new regulations, you know for automobiles or manned aircraft, it’s actually moving incredibly rapidly,” McNabb said. “I think we’re definitely getting close to establishing a standard.”

Drone delivery has also faced uncertainty around public perception, in particular worries around noise, privacy and the threat to wildlife.

But McNabb said there was evidence that experiencing the delivery programs often shifted those concerns.

“If you ask people who have experienced drone delivery what they think about drone delivery it’s overwhelmingly positive,” she said. A survey by Virginia Tech from a 2019 Wing trial in Christiansburg, Virginia, found 87% of respondents were positive about the service.

That has not always been the case. Alphabet’s Wing trial in Australia in 2019 was found by the government to be exceeding noise limits after an outcry by the local community in Canberra.

Quigley said noise wasn’t an issue for him during the trial in Oranmore, adding that the drones couldn’t be heard from inside and even on the street it was little different than a delivery truck.

“I don’t see why the same success that they have in Oranmore wouldn’t be replicated anywhere,” he said.