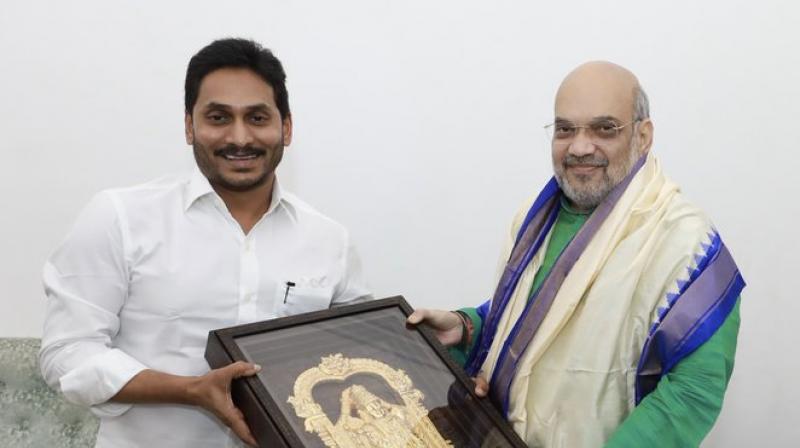 The Chief Minister impressed upon Shah that Andhra Pradesh was committed to the concept of balanced regional development and decentralisation of governance and hence was planning to decentralise capital functions at three locations with Executive Capital at Visakhapatnam, Legislative Capital at Amaravati and Judicial Capital at Kurnool. In this regard, the government enacted the Andhra Pradesh Decentralization and Inclusive Development of All Region Act, 2020 in August 2020.

Jagan Mohan Reddy urged the Union Home Minister to direct the authorities concerned to initiate the process of re-notification of locating the High Court of Andhra Pradesh at Kurnool and also took it to his notice that the proposal was also part of the BJP's official manifesto for 2019 state elections. He Andhra Pradesh was faced with many challenges due to the poor financial situation and In order to make the state systemically stronger and “Atmanirbhar” (self-reliant), it was imperative that the state was accorded Special Category Status. He added that the approval of Special Status would entitle Andhra Pradesh to more Central grants, resulting in proportional reduction of financial burden on the bifurcated state, creation of jobs on the back of new industries, and attainment of fiscal self-reliance due to the enhanced tax base.

The Chief Minister asked for sanction of 13 medical colleges and financial assistance to them.  He said an amount of Rs 3,299 crore related to the subsidy for PDS rice was to be released by the ministry of food & civil supplies. He sought release of pending dues worth Rs 4,652.70 crore and enhancement of annual person-days for work per family from 100 to 150 days by the ministry of rural development. He urged the central government to release pending dues of  Rs 529.95 crore towards Rural Local Body Grants related to 14th Finance Commission and to release pending dues of Rs 497 crore for financial year 2020-21 related to 15th Finance Commission.

The CM also stressed the need to extend support to rejuvenate and make AP power sector more robust in ways such as surrendering of costly thermal power allocation of Kudgi & Valluru (NTECL) plants, supporting Telangana Discoms under Atmanirbhar programme by extending conditional loans,  and restructuring an outstanding high-cost debt of about Rs 50,000 crore in the books of AP Power utilities. In view of the severe financial distress of AP power utilities, it is requested that this debt may be restructured appropriately. Financial assistance was also sought for the reverse pumped storage project in Upper Sileru,