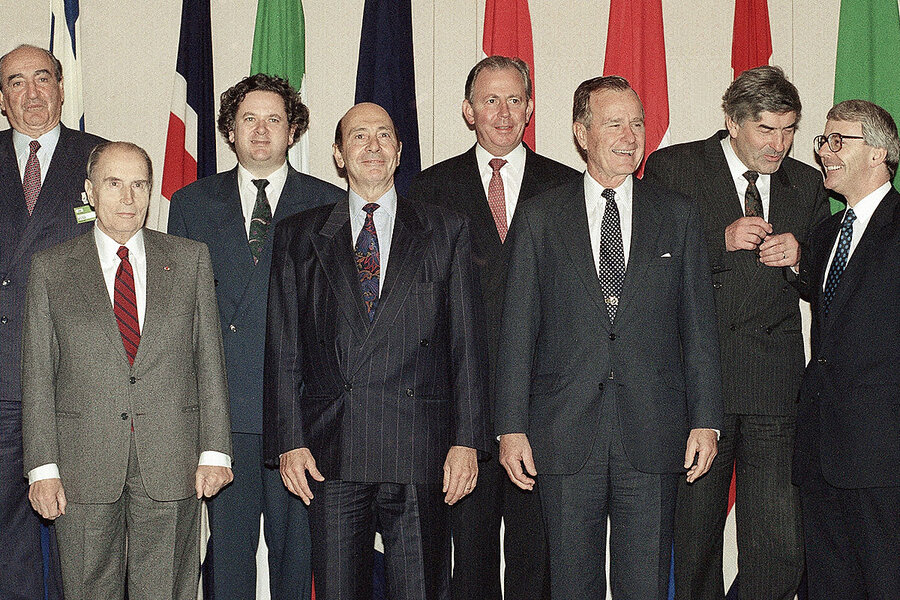 The group of British journalists having a little fun at the expense of the American president – George H.W. Bush – had a point.

The year was 1989, and the world was fast becoming aware of what Americans already knew: Mr. Bush didn’t always have a smooth way with words.

So, after a meeting of NATO heads of state, when the Brits asked the NATO staffer handing out headsets for translations of the American president’s press conference if there would be “a translation for Bush speak,” it was indeed amusing.

The performances of the last five presidents at NATO summits have molded and influenced how Europe views the alliance’s leader – and the United States. Our reporter witnessed them all.

But for me, an American journalist attending my first meeting of NATO leaders, the snickering over a maladroit president also risked obscuring the really big accomplishment Mr. Bush and his foreign policy team sensed was in reach: a peaceful end to the Cold War and a reunited Germany.

Now, 30-plus years and a long line of summits and other gatherings later, I find myself back in Brussels for another NATO summit – this time the debut of President Joe Biden. And being here in the city of the North Atlantic Alliance’s headquarters has had me thinking back over the NATO meetings I attended featuring the five presidents preceding Mr. Biden: the first Bush, then Bill Clinton, George W. Bush, Barack Obama, and Donald Trump.

Three decades and five presidents that spanned the crumbling of the Soviet Union and the end of the Cold War (NATO’s original raison d’etre), the 9/11 attacks and NATO partners’ solidarity with the United States – and on to a world where Europe increasingly plays second fiddle to Asia in America’s National Strategic Orchestra.

Every event has been an opportunity to witness how each president was playing in Europe – and moreover to gauge their impact on European public opinion’s assessment of the U.S.

Viewed from that perspective, what stands out? A young, smooth-talking Bill Clinton with a saxophone; a George W. Bush charm offensive that fell flat; an aloof Barack Obama ensconced behind the tinted bullet-proof windows of his “Beast” limousine; and a NATO-disdaining Donald Trump declaring himself “a very stable genius” at the 2018 summit’s press conference.

Europeans were grateful to the first President Bush, garbled speech and all. But they were smitten by a young Bill Clinton, who came across as charming, smart, seductive, and a little bold – qualities that reinforced Old Continent notions of what America should be.

Belgium was charmed when Mr. Clinton accepted a specially engraved saxophone from the mayor of Dinant, the city where the American president’s favorite musical instrument was born. But Brussels fairly swooned when a waving Bill strolled across the city’s famed Grand-Place, and later dropped in unannounced at the Au Vieux Saint Martin restaurant, spending about a half-hour chatting up stunned diners.

Mr. Clinton “wanted to know the reaction of us Bruxellois to Americans; he wanted to see if we were still friends,” the Saint Martin’s owner later recalled.

And the answer was, they were. Of course there was some disappointment when Bill neglected to play his new saxophone for the people who presented it to him. That would only happen later in the trip, when Mr. Clinton gobsmacked a Prague pub with a rendition of “My Funny Valentine.”

A decade later, the second President Bush would make a NATO summit one port of call of what the White House dubbed a “conversation with Europe” tour – in the wake of an Iraq War that among Europeans was deeply unpopular.

In Brussels, Mr. Bush captured the front page of newspapers by stopping in to make a purchase at a famed chocolate shop. The newspaper photos showed the shop’s employees smiling broadly as the American president made his selections.

But when I stopped by the shop days later, the smiles were gone. It was nice that Mr. Bush stopped in, one shop attendant told me, but it hadn’t changed her view of him. “Personally, I’m against wars, especially unnecessary ones,” she said.

The response was only tepid when the president, from the stage of a Brussels concert hall, laid out his vision of transforming the world’s trouble spots by spreading democracy.

And it may have been that kind of cold reception in “Old Europe” that explained why Mr. Bush would choose Bratislava, the capital of Slovakia – part of what the president’s defense secretary, Don Rumsfeld, famously called “New Europe” – to deliver an open-air speech to a more receptive public.

A half-decade later, Europe would once again find itself enthralled with an American president – at least initially. Barack Obama took Europe by storm, filling Berlin’s Brandenburg Gate early on and even winning a Nobel Peace Prize before completing his first year in office.

But by the time Mr. Obama attended the 2010 NATO summit in Lisbon, Portugal (not all NATO summits are at headquarters in Brussels), Europeans were starting to understand why the American president was also known as “cool Obama.”

Mr. Obama’s aloofness and mild disregard for European leaders he privately dubbed “freeloaders” for not paying more of Europe’s defense bill seemed to be on full display in the contrasting modes of transportation that NATO’s leaders used at the summit.

European leaders held a press conference to highlight the cute, zero-emissions electric vehicles they’d be tootling around in between summit events. But it was Mr. Obama who captured the front pages of Lisbon’s and other European newspapers with detailed descriptions of “the Beast,” the president’s hulking, bomb-shelteresque – and gas-guzzling – limousine.

Yet whatever disappointment Europeans experienced with Mr. Obama, nothing prepared them for the shock of Donald Trump.

Who was this American president who called Brussels a “hellhole” and who was captured at the 2017 NATO summit’s traditional “family photo” pushing his way through shorter and thinner leaders to plant himself at the front of the class?

Then came Mr. Trump’s “very stable genius” self-evaluation at his 2018 post-summit press conference. After the event, a group of Afghan journalist friends came running up to my press center station, desperation in their eyes.

“Our editors want to know why President Trump calls himself ‘stable genius,’ and we don’t know what to say,” one said. “Can you explain?”

I recall responding that I could only make a guess, that some people in the U.S. questioned his mental stability. “But also, remember that Trump was a television personality before becoming president,” I said. “He likes the idea of putting on a show.”

Now Brussels prepares to welcome Joe Biden – a much more traditional president, nothing like the showman Trump – who will be here Monday and Tuesday for NATO and European Union summits.

And if a new Pew Research Center poll released this week is any indication, Mr. Biden is already off to a good start in boosting world opinion of the United States.

Still, Mr. Biden might follow in the footsteps of some past presidents and do something to keep the good vibes going.

So here are a couple of suggestions from a longtime observer of presidents at NATO: As an avid biker, Mr. Biden could don his helmet and join the parade on any one of Brussels’ many bike paths.

Or what about fries with mayonnaise? The president would surely win a city’s heart by stopping in most anywhere and ordering (being careful not to call them “French” fries) a combo that is a national favorite.