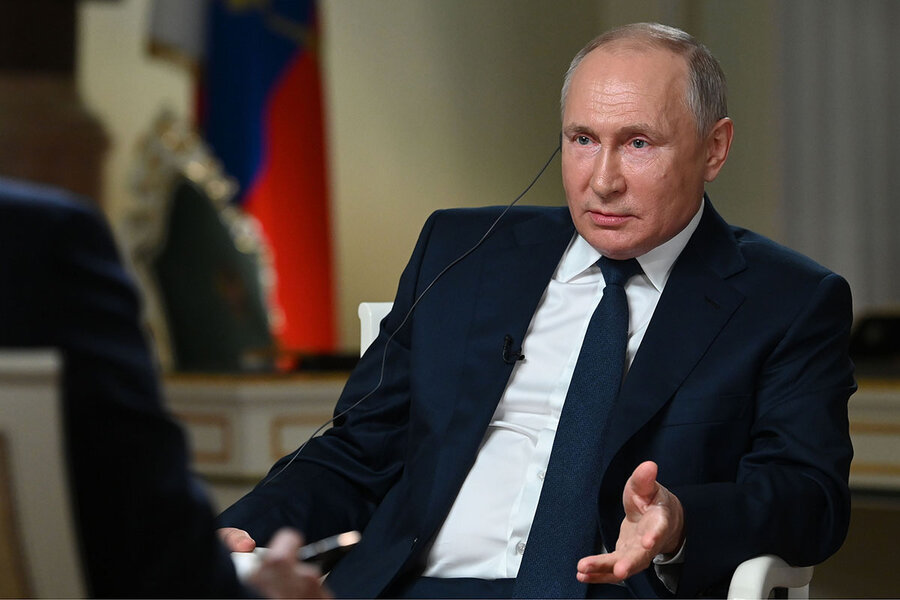 Russia broke out of lockdown earlier this month to stage a lavish economic exhibition in St. Petersburg, billed as the first big international forum of its kind in the post-pandemic era.

The event featured thousands of vaccinated and COVID-19-tested guests, including 200 Americans and the heads of most major Russian businesses and government ministries. In a rare in-person address, President Vladimir Putin spoke at great length about Russia’s economic and political resilience despite years of being buffeted by sanctions, plunging oil prices, and pandemic setbacks. The subtext throughout was that Russia is still here and recovering from the blows, it will not bow to pressure, and it’s open for business and ready to cooperate in building a new, post-pandemic global order.

Mr. Putin had remarkably little to say about his imminent summit with U.S. President Joe Biden in Geneva on Wednesday, other than to rattle off a list of what Russia considers strategic global concerns. But the potential of the meeting to either arrest or accelerate the decline in what the Kremlin still regards as Russia’s most important bilateral relationship was clearly on everyone’s minds.

Russia and the United States are at a nadir in their relations. Russians hope that Wednesday’s summit between the countries’ leaders will establish a baseline understanding of each other’s red lines.

In Moscow there is a widespread sense of frustration over the acrimonious downward spiral that has smothered what was once a fairly robust dialogue, gutted the Cold War-era system of arms control treaties, and left the embassies of both countries without ambassadors and severely understaffed thanks to tit-for-tat expulsions. The vacuum has been filled by an escalating war of words and strong accusations, some well grounded, others more speculative.

That this summit is happening at all is a profoundly hopeful sign. Mr. Biden suggested it in an April phone conversation with Mr. Putin, after relations arguably reached the lowest point in decades when the U.S. president said he thought that the Kremlin leader is a “killer” and both sides withdrew their ambassadors for extended consultations.

“Our best hope is that this … will look boring”

In the days before the summit, both leaders have been tamping down expectations and insisting to their domestic constituencies that the other side will definitely get an earful about matters of principle. For Mr. Biden that means human rights and Russia’s malign behavior abroad. Mr. Putin has been telling domestic audiences that he will make clear that Russia has certain red lines that must not be crossed, including the expansion of NATO to neighboring countries like Ukraine and Georgia.

Most of all, no one wants a repeat of the tumultuous summit between Mr. Putin and then-President Donald Trump in Helsinki three years ago, which turned into a media circus, fueled speculation in the United States that Mr. Trump might be a “Kremlin stooge,” and left many Russians scratching their heads over Mr. Trump’s odd behavior.

“There are a lot of emotions in play, people have all kinds of conflicting expectations, and it’s not likely anyone will feel satisfied. But our best hope is that this Biden-Putin meeting will look boring” to the watching media and commentariat, says Fyodor Lukyanov, editor of Russia in Global Affairs, a Moscow-based foreign policy journal.

“Nobody should expect any breakthroughs or grand bargains. In my view the summit will be successful if we start shaping the framework for a new confrontation. Until now we’ve had a confrontation that was chaotic and unpredictable, one that was very emotional and seemed to us driven more by American domestic politics than foreign policy concerns,” he says.

“It’s clear that Biden and Putin don’t like each other. But Biden is a classic politician, and Putin is quite practical too. If they can just come away from the meeting with a declaration that they take joint responsibility for strategic stability, for setting up a process in which experts will meet and working groups will develop a format to go forward with the big problems that can be managed, like arms control, that will be quite enough to change the whole tenor of the relationship.”

Russian experts concede that the old Cold War network of bilateral arms control treaties is largely outdated and that Mr. Biden’s decision to extend the last of them, New START, for five years should be seen as a jumping-off point to develop new approaches to a far more complex and dangerous global strategic environment. That includes militarization in space, cybersecurity, missile defense, and the emergence of several new nuclear-armed countries that will need to be brought into some new multilateral arms control process.

But a lot of people who won’t be at that table in Geneva have their own stakes in the outcome. They will be scrutinizing the body language and parsing the leaders’ words intensively.

In Ukraine, some already perceive a U.S. betrayal of their interests. Mr. Biden waived sanctions against the Russian company building the country’s controversial Nord Stream 2, a project that Ukraine strongly opposes. And he also made clear – amid an embarrassing mix-up – that Ukraine will not be receiving a much sought-after Membership Action Plan to join NATO at the alliance’s summit in Brussels this week.

Ukrainian President Volodymyr Zelenskyy, who has probably felt like a football in U.S. domestic politics for some time, publicly expressed his bitterness over the Nord Stream 2 decision. The new Russian pipeline will bypass Ukraine, depriving it of about $3 billion in annual transit fees, and giving Russia a free hand to cut off supplies.

Mr. Zelenskyy said, “This is a weapon, a real weapon … in the hands of the Russian Federation. It is not very understandable … that the bullets to this weapon can possibly be provided by such a great country as the United States.”

Vadim Karasyov, head of the Institute of Global Strategies in Kyiv, says there is deep alarm and concern in Ukraine’s government about what Mr. Biden and Mr. Putin might decide about Ukraine behind closed doors. “There is an impression that economic and trade relations with Russia matter more for the West than solidarity with Ukraine. There’s a feeling that the West is concerned with its own problems, and is tired of Ukraine.”

Divisions in the Russian public

Another heavily invested group is Russia’s beleaguered opposition and human rights community, which is currently enduring the toughest police crackdown of the post-Soviet period. Traditionally Russian dissidents hope that U.S. leaders will champion their cause and deliver that concern straight to the Kremlin leader’s ear. Mr. Biden has promised to do that.

But some of them say they have few expectations that Mr. Biden will do anything to ease their conditions. Andrei Prokudin, a campaigner for imprisoned anti-corruption activist Alexei Navalny in the central Russian city of Tver, says today’s Russia is not very susceptible to outside pressure.

“Maybe Biden will say some formal words, express his concern, and that will be it. There won’t be any serious action, and nothing is likely to change inside Russia,” he says.

And then there is the Russian public. A recent poll by the independent Levada Center finds that Russians are almost evenly divided in their attitude toward the U.S., with 40% taking a “positive” view of the country and 42% saying they feel “negative” about it.

“It’s not Soviet times anymore, there are no ideological differences, and a lot of Russians just can’t understand why the U.S. is still hostile towards us,” says Mikhail Chernysh, a researcher at the official Institute of Sociology in Moscow. “Many people feel that the situation is abnormal and the antagonistic American attitude is not justified.

“For most people I think it would be enough if the two leaders meet in Geneva, show that they are capable of having amiable relations and that they accept each other, and declare some plan to hold future contacts.”