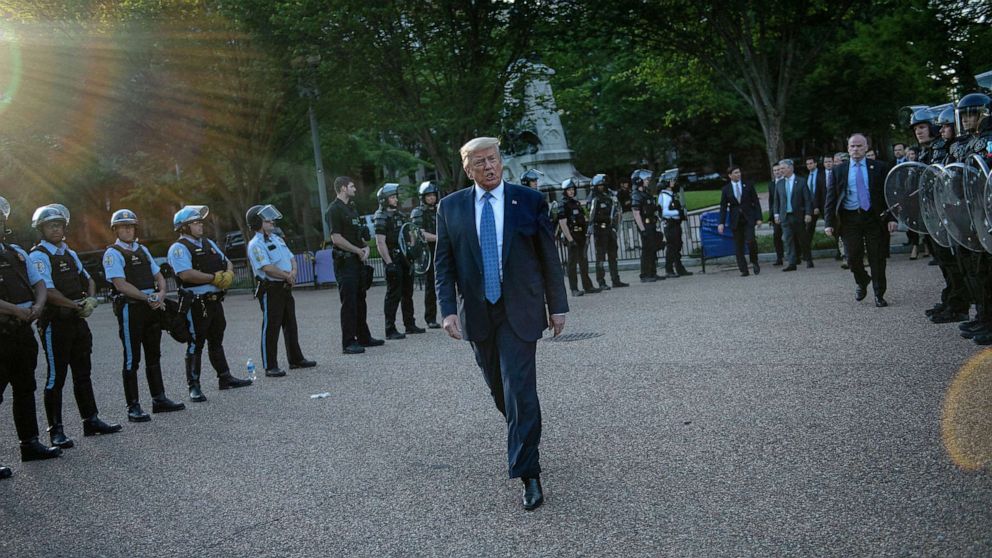 U.S. Park Police did not clear Lafayette Park and the nearby area of protesters on June 1, 2020, so President Donald Trump could walk from the White House over to St. John’s Church, but learned of his interest in surveying the site hours after they already had begun planning to clear the area to put up new fencing, according to a new watchdog report.

The Interior Department’s inspector general did not determine whether law enforcement acted inappropriately against demonstrators last year and did not focus on individual incidents of police use of force, but found that poor communication between agencies and ineffective dispersal warnings “may have contributed to confusion during the operation and the use of tactics that appeared inconsistent” with initial plans.

Specifically, the report found that Bureau of Prisons officers on the scene used pepper spray against protestors and that Metropolitan Police officers used tear gas, despite orders from Park Police not to do so.

Additionally, Secret Service deployed against protestors before the first dispersal orders were given – and warnings asking demonstrators to disperse were not heard by protestors before police started aggressively clearing the park.

The office also concluded that the Park Police officers acted within their authority to begin clearing Lafayette Square and nearby before the city’s 7 p.m. curfew, a move that was widely criticized at the time as having contributed to the chaos and confusion at the scene.

Interior Department Inspector General Mark Greenblatt, nominated by Trump, called the events of June 1 a “a particularly tumultuous event in a tumultuous time” and said their review looked at why U.S. Park Police decided to clear Lafayette Square when and in the manner they did, and whether the president’s plans to come out of the White House influenced those decisions. The review ultimately found park police had been planning to clear the area for days to install anti-scale fencing and that the decisions on the ground were not changed because of the president or White House’s plans.

“We did not find evidence that a potential presidential visit to the park or the St John’s Church influenced the park police’s decision making, or their deployment, you know, in their operation to clear out the park. So that’s the big, the big finding of our report is, is the is the clear evidence of why they decided to do so and when they made the decision, and on the flip side, the lack of evidence related to the President’s potential visit influencing that decision,” he said on ABC News Live.

Trump, accompanied by top officials and with great fanfare, walked over to the church, damaged by fire the night before, minutes after protesters were cleared and following a Rose Garden speech promising to crack down on violent protests, ending his remarks by saying, “… and now I am going to pay my respects to a very, very special place.”

One Park Police commander told the inspector general’s office they were caught off guard about Trump’s plans during a conversation with Attorney General Bill Barr, who asked, “Are these people still going to be here when POTUS [President of the United States] comes out?” according to the report.

“The USPP operations commander told us he had not known until then that the President would be coming out of the White House and into Lafayette Park. He said he replied to the Attorney General, ‘Are you freaking kidding me?'” the report reads.

But it does not explore why so many officers used as much force as they did against peaceful protesters in the area that day — or dig deeper into the actions of the Secret Service and other federal entities on the ground.

Regarding claims of violent tactics used against protestors, the report said only that “individual uses of force” by Park Police officers “are the subject of separate inquiries or ongoing lawsuits.”

Greenblatt told ABC News that even though his office did not speak to Barr, the White House, or Secret Service for this review, it would have done so if the evidence indicated there was pressure from any of those sources that had an impact on Park Police decisions.

“We would have pursued evidence had it gone elsewhere. But we found that the U.S. Park Police officials on the ground, they owned the decision and the corroborating evidence supported that,” he said on ABC News Live.

“And so we did not feel the need to engage with some of the other parties that you mentioned, but we did pursue evidence, to the extent that it would shine a light on the Park Police officials’ decision making, we did pursue that evidence, and we would do so again if we found, if we found such evidence leading elsewhere.”

Within minutes of the report’s release, Trump, through his office, issued a statement claiming vindication.

“Thank you to the Department of the Interior Inspector General for Completely and Totally exonerating me in the clearing of Lafayette Park!” he said.

“As we have said all along, and it was backed up in today’s highly detailed and professionally written report, our fine Park Police made the decision to clear the park to allow a contractor to safely install antiscale fencing to protect from Antifa rioters, radical BLM protestors, and other violent demonstrators who are causing chaos and death to our cities. In this instance, they tried burning down the church the day before the clearing. Fortunately, we were there to stop the fire from spreading beyond the basement – and it was our great honor and privilege to do so. Again, thank you to the Inspector General!” Trump’s statement said.

Greenblatt declined to respond to Trump’s statement, saying he wanted to remain nonpartisan and apolitical.

The report recommended the Park Police create new policies for handling and dispersing crowds, and improve coordination in the field between law enforcement partners.

“We believe that if the DOI implements the recommendations from our review of the events of June 1 in Lafayette Park to future activities, USPP efforts to protect these locations and those who visit them will improve for similar operations,” Greenblatt wrote in a statement.

The DOJ inspector general and the Government Accountability Office, another federal watchdog agency, are conducting their own inquiries into law enforcement responses to protests in Washington and around the country last summer, and there are several federal lawsuits against Trump over the forced clearing of the park outside the White House.

In response to the IG report, Interior Secretary Deb Haaland — who was critical of the operation as a Democratic member of Congress last year — said the department planned to create a task force to review its law enforcement programs, and policies around body cameras and use of force.

In a statement, House Natural Resources Committee Chairman Raúl Grijalva, a California Democrat, questioned the report’s findings, and said his panel would continue its own inquiry into the operation.

“The Lafayette Square crackdown was played on repeat on televisions around the world and raised serious questions about why heavily armed law enforcement attacked peaceful civilians practicing their constitutional rights. Not only does this report not answer those questions, it doesn’t even seem to acknowledge them,” the statement said. “Our own investigation is ongoing, and we will continue to pursue answers to the questions this report didn’t satisfactorily address.”

“The Inspector General’s report, which I requested while serving as Secretary of the Interior, makes crystal clear that the irresponsible effort to attack the character of the men and women of the U.S. Park Police by falsely claiming that the goal of the actions taken in Lafayette Park were intended to provide a photo opportunity for the President were wrong,” he said. “Each person that made such a claim, whether in the Congress or in the media, owes an apology to the men and women of the U.S. Park Police, who were literally under siege in the nights leading up to the clearing. Both the incident commander and the then acting chief of police of the United States Park Police handled a difficult situation with distinction and that is reflected by the contents of this report,” Bernhardt said.

The American Civil Liberties Union, which has filed a lawsuit on behalf of eight protesters it says were injured by police, said government officials cited in the report must be held more accountable.

“These shifting explanations cannot distract from the fundamental problem: The force used against the demonstrators at Lafayette Square was grossly excessive in relation to any conceivably legitimate purpose,” an ACLU statement said. “Given the severity and coordinated nature of the attack, it cannot be chalked up, as the Interior Department now suggests, to confusion or miscommunications. The assault on the civil rights protesters was a clear violation of the Constitution, and the federal officials who ordered it and perpetrated it must be held accountable.”