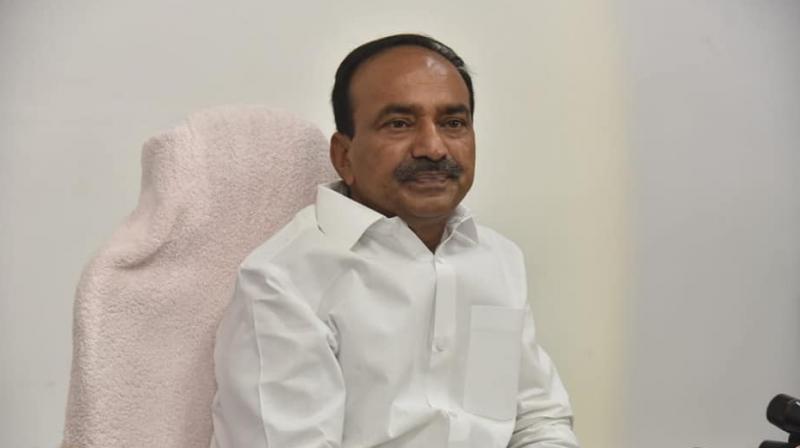 HYDERABAD: Former minister Etala Rajendar is all set to join the BJP in the presence of party president J.P. Nadda in Delhi on Monday.

As per schedule, Rajendar will leave for Delhi from the Shamshabad airport at 6 am on Monday and will join BJP at 11 am at the party headquarters.
With this, the BJP is hopeful to making a comeback in Telangana and emerging as a force to reckon with if it wins the Huzurabad bypoll necessitated by Rajendar’s resignation from the Assembly on Saturday.

It may be yet another byelection for many, but for the BJP, it is a litmus test. The party central leadership is said to have laid special focus on the Huzurabad bypoll as it strongly believes a victory will change the course of Telangana politics, dominated by the TRS since the formation of state in June 2014.

The BJP is looking to bounce back after suffering back to back electoral setbacks in the recent Legislative Council and municipal polls and the Nagarjunasagar Assembly bypoll at the hands of the TRS.

Union minister of state for home G. Kishan Reddy told this newspaper, "The party's central leadership is seeking a report on Huzurabad developments every week. Party's state in-charge Tarun Chugh will camp in Telangana for most of the days until Huzurabad bypoll is over.  A few other national leaders will visit the state and campaign in Huzurabad. The BJP will emerge victorious and the downfall of the TRS will begin. This bypoll result will pave the way for the BJP to come to power in Telangana in 2023."

The BJP was upbeat after its stupendous performance in Dubbak bypoll and the GHMC elections towards 2020-end and declared itself as the only alternative to the TRS. replacing the Congress. This did not last long as the BJP faced shocking defeats in successive polls in between March and May this year and Congress emerged as principal opposition to TRS.

At this juncture, the Rajendar episode gave an unexpected opportunity to the BJP to prove that it is the only alternative to the TRS by winning Huzurabad bypoll and brace the party's rank and file for the 2023 December Assembly polls.

In Dubbak, the BJP had a strong local candidate in M. Raghunandan Rao, which helped the party trounce the TRS. The lack of such a candidate in Nagarjunasagar led to the BJP failing to retain its deposit.

The BJP was considered weak in Huzurabad as it lost deposit in 2018 Assembly polls. In fact, the BJP candidate P. Raghu polled fewer votes (1,683) than NOTA (2,867) but Rajendar’s entry has changed the scenario altogether.
Rajendar has never lost an election from this seat since 2004. He was elected six times and the BJP is confident of defeating the TRS using Rajendar’s popularity in the constituency.