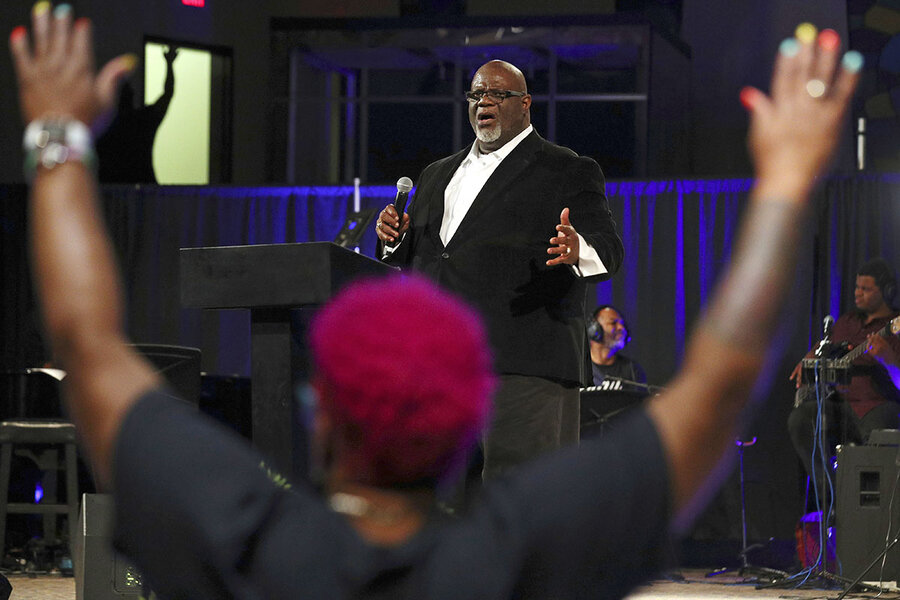 The Rev. Dwight McKissic has spent his life in the church – and for almost his entire adulthood, church has meant membership in the Southern Baptist Convention.

A pastor’s son raised in Pine Bluff, Arkansas, Mr. McKissic studied at one of six seminaries in the SBC and later founded Cornerstone Baptist Church in Arlington, Texas. For almost 40 years, the church has been a dues-paying SBC member, and Mr. McKissic a faithful SBC pastor.

This week will decide whether he remains one.

In a mirror of the U.S. as a whole, America’s largest Protestant denomination is a house divided on issues of race, gender, and politics. Can it continue to stand?

An enormous flock of 16,000-plus SBC members has congregated in Nashville for the denomination’s annual summit, preparing to decide its future. As it stands now America’s largest Protestant denomination is a house divided on issues of race, gender, and politics. The convention’s choices on doctrine and leadership will decide how, and perhaps if, that house will stand.

From his office in Arlington, Mr. McKissic and half a dozen other Black pastors will watch for two specific outcomes. If the SBC rescinds a 2019 resolution tepidly approving critical race theory as an analytical tool, or if one of the two most conservative candidates in this year’s presidential election wins, his church will leave the denomination.

“I see them turning back the clock on race, and that is a line in the sand for me,” says Mr. McKissic in a phone interview.

An exodus of other member churches may follow, warn SBC pastors interviewed by the Monitor. Prominent church leaders – including author Beth Moore – have already left amid caustic internal debate. Some fear that without resolution the SBC could scatter into separate factions, like many of America’s other Christian denominations.

For decades the SBC has united around a commitment to scriptural authority and a willingness to oppose secular culture. But the more culture changes, the harder it becomes to resist. The past 10 years have ushered in a revolution for LGBTQ rights, the advent of Black Lives Matter, and the bitterly divisive election of Donald Trump. This new, more polarized America has made it harder to stay united around doctrine alone, and ushered in a familiar debate between groups who feel like it’s grown too conservative and those who feel like it’s not conservative enough.

“This is a bit of an identity crisis moment for the SBC and white evangelical Christianity more generally,” says Jemar Tisby, church historian and CEO of the Witness, a Black Christian Collective.

“That’s the big question that Christianity in the U.S. is facing right now: If you don’t want the status quo, what do you want?”

In 1845, the status quo for American Baptists was division as well. That year the denomination split after Northern church leaders refused to appoint a missionary who owned slaves, and Southern members formed the SBC.

Until World War II, the denomination congregated in small towns around the Old South, slowly building an organizational structure and fundraising strategy, says Nancy Ammerman, professor emerita of sociology of religion at Boston University. After the war those tools allowed the SBC to grow fast and far, spreading across the country and building a distinct culture, which included a progressive wing that rallied on behalf of the civil rights movement.

Then came the 1980s, when a tranche of SBC leaders who felt the denomination had drifted from Scripture began a decadelong campaign to restructure it. In about 10 years, this “conservative resurgence” had ended and the SBC had a new institutional identity and new leaders, many of whom still hold power today.

Activism on issues like opposing same-sex marriage and abortion rights were a hallmark of this new era, but the 2016 election of Mr. Trump brought new urgency to SBC politics. His evangelical advisory board included many SBC pastors. Southern Baptists voted for him at an overwhelming rate.

“Increasingly the sense that they have to be on the front lines of the cultural war is a defining trait” of the SBC, says Paul Harvey, an expert on Southern Christianity and chairman of the history department at the University of Colorado, Colorado Springs.

Mr. Miller, who considers himself a conservative but not a Republican, has felt pulled in separate directions by his faith and his denomination during the Trump era. Some groups in the SBC, he says, “want us to be loyal to the GOP above our loyalty to Christ.” Just months ago he was scolded by a former congregant for his views on the Jan. 6 Capitol riot.

“I don’t think the debate in the SBC is on the Bible at this point,” says Mr. Miller. “It’s on peripheral issues.”

Last Thanksgiving, the presidents of all six SBC seminaries released a statement denouncing critical race theory, and declaring it incompatible with Scripture. The statement contradicted a 2019 resolution affirming the framework as an interpretive tool subordinate to the Bible, and upset many Black members of the SBC, some of whom departed shortly after.

Mr. McKissic likens the statement to antebellum times, when enslaved people could only worship with sermons approved and supervised by white masters. Amid a national reckoning with race after the murder of George Floyd last summer, the letter “says that [in its] seminaries Black professors will not be free to teach race as they see fit,” says Mr. McKissic.

Meanwhile congregations are shrinking. Last year saw the largest decline in SBC membership in 100 years, continuing a steady dip over the last decade. Younger people in particular are leaving at a high rate, partly because of the denomination’s political stances. The denomination, which is around 85% white according to 2014 data from Pew Research Center – far from the least integrated Christian denomination – may also lose some members of color who feel alienated.

Yet if the SBC softens some of its stances on race and politics it may lose members who want it to move further right. A movement of ultra-orthodox churchgoers have made their way to Nashville this week to “take back the ship,” some styling themselves with pirate flags and emojis. Last year, SBC members in this faction formed the Conservative Baptist Network, a distinct organizational structure for the denomination’s right flank.

Such circumstances suggest this may be an inflection point in SBC history, as some question whether the denomination’s center can hold.

“This 2021 convention history will record as a watershed convention in determining the identity, trajectory, and the future,” says Mr. McKissic.

Amid the conflict, Dr. Henry Roberts II shows up to his Word of Life Community Church each day at an empty shopping center in Chickasaw, Alabama.

Dr. Roberts graduated from Southern Baptist Theological Seminary, and his church is affiliated with the SBC among other denominations. Word of Life can’t identify, he says, with a group that rejects the word of God. But he and his congregation have more to do than watch the events in Nashville.

“This is a trench church,” says Dr. Roberts, meaning it’s focused on serving the community, not the culture wars. “See people in the trenches, we don’t have time for politics. We are out here winning souls, feeding hungry people, changing lives.”

Chickasaw was a sundown town just decades ago, meaning that Black people were required by law to leave before sunset, and the area still confronts poverty and racial division. Word of Life itself is undergoing renovation and is filled with binders, books, candlesticks, communion trays, and photographs of the congregation over the years hanging on office walls. The air conditioning doesn’t work in all parts of the building. Nor does the internet.

Such needs demand most of his attention, but Dr. Roberts knows this convention comes with high stakes. The SBC has been a partner and a home throughout his ministry. The convention, he says, “will either heal us, or it will devastate us.”

So Dr. Roberts prays, often holding his Scofield Bible, bound in a leather case with the Word of Life logo in front. A dove flies atop the Bible and the Earth. Hebrews 11:6, the church verse that begins, “But without faith it is impossible to please him,” sits below.

“I pray that they will submit to the will of God,” says Dr. Roberts. “It’s a simple prayer.”